Our science-based guide analyzes the scientific research to help you save time, money, and frustration so you know exactly what to take, how much to take, and when to take...

Get The Testosterone Supplement Guide Now

Infographic - What You Need to Know about Testosterone

Ready to boost your testosterone?

Our Supplement Guides will save you time, money, and frustration, giving you only research-backed advice...

Get The Testosterone Supplement Guide

Want a supplement guide you can trust to help you understand your testosterone levels?

Here's the thing - it's not as easy as taking a magic pill and calling it day. Our bodies are incredibly complex, and that's what we do day-in-day-out: analyze nutrition research to understand what actually works (and what's just a waste of money).

So if you want to take supplements to help you increase testosterone, you need our Supplement Guides.

Each guide is packed full of practical knowledge, with specific instructions on what to take, in what dosage, and at what time, so you can reliably improve your health. The guides provide accurate information on which supplements work and which don’t — all of it backed by science. Check it out now

Before you even think about taking a testosterone-boosting supplement, you really should know some basics about this mightily important compound.

Testosterone is the holy grail of hormones for many males. And like the holy grail, it’s shrouded in mystery. But if you take the time to understand the concepts laid out here, you’ll be ready to take action, using our step-by-step recommendations for those interested in supporting their testosterone levels.

Testosterone can be a barometer for what’s wrong

If you’re feeling generally crappy, there’s a set of common things that doctors look at. For example, is your thyroid functioning properly? Is your vitamin D level adequate? If you’re a male, there’s a decent chance the doctor will look at your testosterone levels as well.

That’s because testosterone plays a central role in wellness and vitality, and almost 40% of men over the age of 45 may have low testosterone. In general, hormones (such as testosterone and thyroid hormone) can play an amazingly variety of roles in the body, and hence are important pay attention to.

And indeed, low testosterone is linked to inflammation, weight gain, and worsened cardiovascular health, among many other detriments that have been studied.

Low testosterone can make you feel lethargic, depressed, and generally crappy. It can be a death knell for gains at the gym. Perhaps even more importantly, it’s linked to chronic disease. But the devil is in the details: low T can have a variety of causes, not all of which are easy to fix.

The range for testosterone is NOT standardized

Testosterone levels seem to be decreasing in American males over the past few decades, both total T and free T. Total testosterone is all the testosterone you’ve got floating around in your blood. It combines two things:

Testosterone is measured as total and free testosterone. Getting measured isn’t the end of the story though, since the range can vary a ton. So you’ll have to do your own homework to figure out if you need to take action.

Age is just a number … except when it comes to testosterone?

Supplement companies want you to believe that as you get older, you get totally screwed due to plummeting testosterone. It even has a fancy-sounding name: andropause. Oh no, my androgens have paused, what do I do?

Here’s what to do: pause, back away from the supplement bottle, and look at what the evidence actually says.

Total testosterone goes down by about 1-2% per year, starting sometime in your 30s, and bioavailable testosterone decreases by about 2-3% a year. Those numbers can be pretty misleading though. Men approaching middle age tend to exercise a lot less, and eat a lot worse. So nobody really knows what a “natural” decline in testosterone looks like, on a population-wide basis. It’s kind of like saying muscle mass decreases 1-2% a year once you hit middle age … that decrease can have a lot to do with more time spent on work and family, and less time spent trying to get ripped to attract a partner (among other reasons, of course).

Remember when we mentioned that almost 40% of men over the age of 45 may have low T? Well, there’s a wrinkle in the story, and it’s an important one. Only around 10% of men actually have symptoms of low T. So there’s a mismatch: some men with low T have symptoms, while others with low T feel okay or even great. That’s a surefire sign that testosterone isn’t likely to be the only factor at play.

In fact, if you prescribe testosterone to elderly men with low-normal T levels, their symptoms often don’t change!

Yes, testosterone is very important. And yes, it goes down with age. But some people feel great after boosting their T levels, while others don’t feel any different.

Tell me - How do I boost my testosterone?

You should also be thinking about the forest, not just the trees. Why is your T low? What else might be going on?

Testosterone can plummet with inadequate sleep, and when you’re super stressed out or working out too much (due to the effects of cortisol). There are also many other things that can impact T levels, ranging from alcohol to the chemical BPA (which used to be in water bottles, and is still in receipts and some kitchen items).

If you’re carrying some extra pounds, that can lead to a vicious cycle with testosterone levels:

Don’t feel like you have to take prescription testosterone to feel better. For some, this is the only option that works. For many others, a change in habits can help. And for others, testosterone isn’t even to blame for how they feel. There are a million and one reasons you could be feeling fatigued and have lower libido than usual! 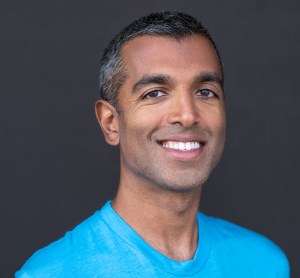 Kamal Patel is co-founder and director of Examine.com. He holds two master’s degrees from the Johns Hopkins University, in business and in public health, and is on hiatus from a PhD in Nutrition for which he’s investigated the link between diet and chronic pain. He’s published peer-reviewed articles on vitamin D and calcium, as well as on a variety of clinical research topics. He’s also been involved in research on fructose and liver health, on nutrition in low income areas, and on mindfulness meditation.

Most general supplements with the most research

Most specific supplements for a given context. 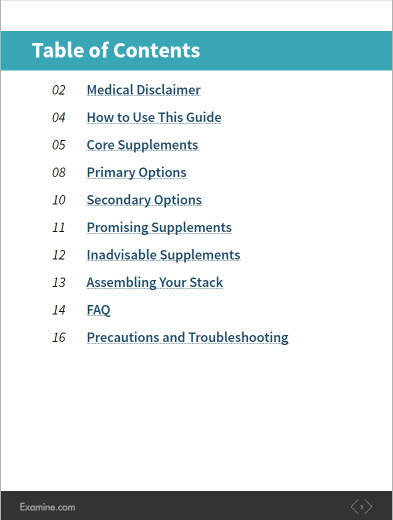 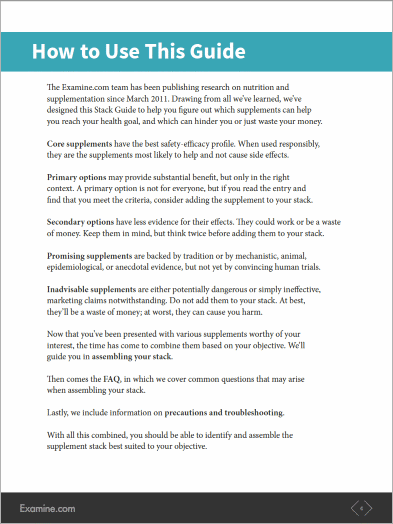 How to Use This Guide 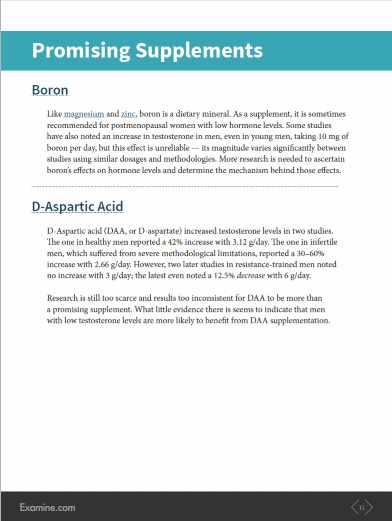 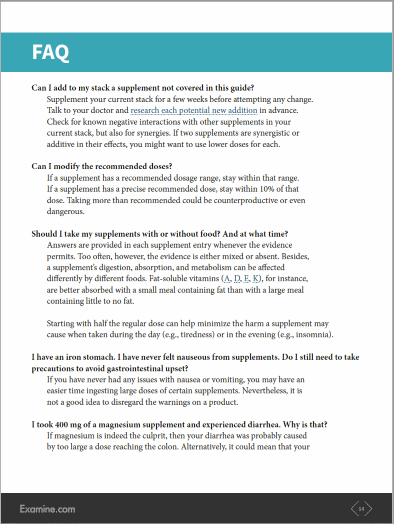 Spend your money on supplements that actually help boost testosterone...

Our Supplement Guides will save you time, money, and frustration, giving you only research-backed advice...

Get The Testosterone Supplement Guide

Want to improve all facets of your health?

The Examine.com team has created 17 step-by-step guides; each guide focuses on a specific issue, such as fat loss, muscle building, testosterone production, or anxiety. Each guide provides accurate information on which supplements work and which don’t — all of it backed by science.

Each guide is packed full of practical knowledge, with specific instructions on what to take, in what dosage, and at what time, so you can reliably improve your health.

Get all 17 Supplement Guides

Where should we send you your Testosterone Sample?