Lagerstroemia, also known as Banaba, is a plant whose leaves have been used for anti-diabetic purposes. It contains a variety of molecules such as corosolic acid which may confer benefit to glucose control.

Unless otherwise stated, this article on Banaba Leaf refers to the plant Lagerstroemia Speciosa although the term of 'Banaba' sometimes is applied to the entire genus of Lagerstroemia falsely

The herb Banaba (Lagerstroemia Speciosa) usually contains the following compounds which are seen as relatively unique to Banaba:

With the following compounds in Banaba meaning more general:

The main bioactives that exert the benefits associated with Banaba Leaf appear to be Valoneaic Acid and Corosolic Acid; the latter being very common among plants but Lagerstroemia Speciosa being a very good source of Corosolic Acid

The content of Valoneaic Acid (VA) in Banaba leaves can be increased by roasting (15 minutes at 170°C) from 0.057% to 0.184% the weight of the dry leaves (222% increase), and VA can be produced by the breakdown of the compounds Lagerstroemin, flosin A, and reginin A.[4]

Extracts of Banaba appear to have anti-oxidant effects, which have been confirmed in the serum of rats fed 50-500mg/kg Banaba leaf (1% Corosolic Acid) over 60 days.[13] In vitro tests suggest this extract has an anti-oxidant potency (measured by ABTS+) of 0.012umol of Trolox equivalents per gram.[13] The fruits also have anti-oxidant potential, which is comparable to some other fruits although not inherently remarkable in potency.[14]

Some (unremarkable) antioxidant properties, and roasting the leaves may increase the content of Valoneaic Acid by breaking down some tannins structures into Valoneaic Acid 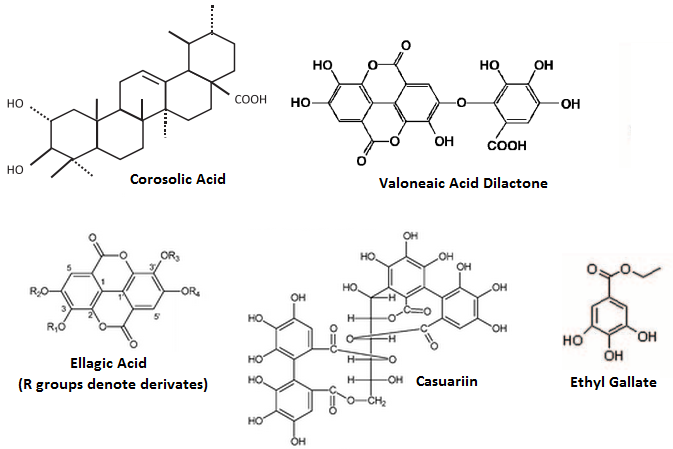 The anti-inflammatory effects of Banaba appear to extend to the heart, where in isolated Hc92 cardiomyocytes concentrations of Lagerstroemia Speciosa between 0.25-1mg/mL are able to reduce the nuclear activity of NF-kB induced by TNF-α, with 1mg/mL effectively abolishing NF-kB activation.[15]

When looking at fractions of Banaba leaf the acetone, ethanolic, butanolic, and water extracts all appear to have similar inhibitory potential on the alpha-myalse enzyme (35-50% inhibition at 200ug/mL in vitro) with a fraction containing 24% Valoneaic Acid Dilactone (VAD) reaching near 100% inhibition at 200ug/mL.[4] VAD and Valoneaic Acid (VA) appear to be highly correlated with alpha-amylase inhibition from Banaba Leaf.[4] Triterpenoids have failed to exert any significant inhibition of alpha-amylase.[3]

Alpha glucosidase may also be inhibited by triterpenoid compounds, with Corosolic Acid being most potent (IC50 of 3.53ug/mL; uncompetitive inhibition) with notable inhibition coming from Maslinic Acid (5.52+/-0.19μg/mL) and Oleanolic Acid (6.29+/-0.37μg/mL) with the ethyl acetate fraction itself tested being 88.72+/-1.02μg/mL.[3] One other study has noted that the extract itself has an IC50 of 0.3μg/mL, suggesting other compounds may be contributing beyond Corosolic Acid.[16]

One acute study using 10mg Corosolic Acid (99% pure) given 5 minutes prior to a 75g Glucose Tolerance Test in humans noted that at 60-120 minutes post-ingestion that there was reductions in blood glucose and that the 90 minute time point was statistically significant.[17]

Corosolic acid appears to have some degree of efficacy in humans

An ellagitannin from Banaba, Lagerstroemin, appears to act as an agonist of the insulin receptor.[18] A such, it works via PI3K and is inhibited by Wortmannin.[18]

A study in streptozotocin-induced diabetic mice given an extract of Banaba standardize to 1% Corosolic acid (50-500mg/kg bodyweight) for 2 months noted that measurements at 10 days or sooner failed to show any benefit but that all doses reduced blood glucose concentrations at day 15 and maintained similar potency up to day 60.[13]

Isolated Corosolic acid from Banaba at 0.023% of the diet in KK-Ay diabetic mice noted reduced serum (32%) and hepatic (46%) cholesterol concentrations after 10 weeks.[19] Corosolic acid is the bioactive which is thought to mediate most effects of Banaba leaf due to its high concentration and known bioactivities.[20]

Glucosol, a patented blend of Banaba, appears to be able to reduce blood glucose in the serum of diabetic rats within 90 minutes of administration.[21]

One human study (not located online, but noted in this review as citation 19[20]) notes that oral administration of Banaba Leaf over a year in pre-diabetic persons (glucose greater than 110mg/dL) was associated with a 16.6% reduction in blood glucose with no reported hypoglycemia nor adverse effects.

One study using the Brand name product 'Glucosol' (no funding from company producing Glucosol) noted that 32-48mg of this product standardized to 1% Corosolic Acid was able to reduce the blood glucose of Type II Diabetics after 15 days in a dose-dependent manner.[12] The degree of reduction was 3.18-4.9% at 16mg (failed to reach statistical significance), 6.5-10.7% at 32mg, and 20.2-30% at 48mg; oddly, soft gels appeared to be more effective than hard capsules.[12] There is also apparently an unpublished study (again mentioned in a review of human trials[20]) where a soft gel of Banaba leaf (10mg Corosolic Acid) was used over 30 days in prediabetics or type II diabetics and resulted in 10% reductions of blood glucose (fasting and postprandial) relative to placebo.

Although a variety of human studies exist, a few are too confounded with other nutrients to draw conclusions from and many of these studies are inaccessible online. There appears to be some benefit associated with oral Banaba Leaf which is possibly related to the Corosolic Acid content, but there is a lack of published and large double-blind trials

The tannin structures appear to be able to increase glucose uptake in isolated rat adipocytes via GLUT4 translocation, with Lagerstroemin, flosin B, and reginin A being unique bioactives in Banaba shown to do so,[24] with tannic acid itself being a contributing factor.[25] At a concentration of 0.04mg/mL, a few tannins showed potency in inducing glucose uptake similar to 100nM insulin (Flosin B, Stachyurin, Casuarinin, Lagerstroemin, and 2,3-(S)-hexahydroxydiphenoyl-α/β-D-glucose), with all tannins reaching maximal glucose uptake in the range of 24-49% at concentrations below 1mg/mL.[24] A hot water extract of Banaba still exerts glucose uptake effects to a lesser potency than insulin (due to less concentration of bioactives)[26] and there do not appear to be additive nor synergistic effects with insulin itself.[26]

Corosolic acid has also been shown to induce GLUT4 mobilization in adipocytes[27] and other cells.[28]

At least one ellagic acid derivative (3-O-methylellagic acid, of which ellagic acid passively degrades into) has been noted to suppress glucose uptake.[24]

Mixed effects on glucose uptake, but many of the tannin structures appear to be able to stimulate GLUT4 translocation and promote glucose uptake into cells

This page features 28 references. All factual claims are followed by specifically-applicable references. Click here to see the full set of research information and references for Banaba Leaf.