Pterostilbene is most often used for

Pterostilbene is a dimethylated derivative of resveratrol that, for some mechanisms, is more potent. It is also much better absorbed, and is commonly referred to as a 'better resveratrol'. It looks promising, but has significantly less research than its predecessor.

Pterostilbene is most often used for

Pterostilbene (trans-3,5-dimethoxy-4-hydroxystilbene[1]) is a stilbene compound that is structurally similar to other popular stilbenes such as resveratrol or piceatannol;[2] it is named after its first discovered source (the pterocarpus genus)[3] but is also a component of blueberries and grape products. It is a phytoalexin (compound produced by plants as a defense against parasites and insects) similar to resveratrol[4] albeit more potent.[5][6]

Pterostilbene is a phytoalexin (plant chemical defense) similar to resveratrol, belonging to the stilbene class of molecules; it is named after the pterocarpus genus of plants

Pterostilbene is contained in low quantities in a few plants, most notably blueberries and grapes. Despite being in low concentrations, it is likely bioactive following oral ingestion of these fruits and their products (such as wine)

The structure of pterostilbene is very similar to resveratrol, although the 3,5-dihydroxy part of resveratrol (the two hydroxyl groups on the benzene ring to the left) are replaced with methoxy groups. 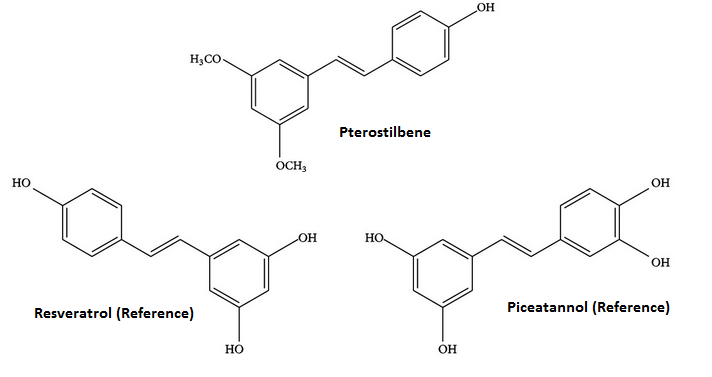 The antioxidant capacities of resveratrol requires that there is a hydroxylation at the 4' position (right side of the molecule) and that the overall molecule is in a trans configuration rather than cis.[15][16][17][18] The above stilbenes all abide by these requirements while others such as pinosylvin do not. The methoxy groups on perostilbene appear to allow a greater antioxidative capacity relative to resveratrol.[15][16]

Pterostilbene is a methoxylated resveratrol, essentially. It has a larger difference in structure from resveratrol than piceatannol (another common stilbene compound, which is more similar to resveratrol). These three structures form the common dietary stilbenes

Pterostilbene, due to the two methoxy groups, exhibits increased hydrophobicity and oral absorption relative to resveratrol.[19] Relative to the approximate 20% bioavailability of resveratrol following oral ingestion,[20] pterostilbene's is near 80% at oral doses of 56-168mg/kg[19] and a bit lower (59.2+/-19.6% when paired with 2-hydroxypropyl-β-cyclodextrin, a delivery system[21] that complexes pterostilbene[22]) at 15mg/kg.[23] The general idea of methylated flavonoids or polyphenols having greater absorption is well known.[24]

Taking pterostilbene by itself has been noted to have a lower bioavailability (15.9+/-7.8%) than when taken as part of a delivery system, and bioavailability is further significantly reduced when taken in a fasted state (less than 5.5%).[23] Increasing the dosage to 60mg/kg under these same conditions increases the bioavailability two-fold.[23]

Chronic dosing of pterostilbene appears to reduce the peak serum values while prolonging the time to reach peak levels. When looking at overall bodily exposure to pterostilbene, there isn't a predictable difference

The clearance rate of pterostilbene suggests that it readily bioaccumulates in the body[19] and the twin methoxy groups on the molecule mean it can diffuse into a cell more readily than resveratrol.[25]

Pterostilbene has been noted to activate AMPK (albeit in prostatic cancer cells).[26]

10-30μM pterostilbene appears to reduce microglial nitric oxide production when stimulated by LPS[27] without directly scavenging the nitric oxide radicals.[28] It appears to work via inhibiting IκBα phosphorylation, and is slightly more potent than resveratrol.[28]

Pterostilbene appears to exert anxiolytic effects in the 1-2mg/kg oral dosing range in mice subjected to an elevated maze test, although it appears ineffective at 5-10mg/kg; this is thought to be related to ERK phosphorylation in the hippocampus[29] which is known to be related to anxiety and mood.[30]

Isolated pterostilbene has been noted to improve cognition in aged rats when fed in the diet at 0.004-0.016% over 12-13 weeks, with the improvements correlating with hippocampal concentrations of pterostilbene.[31]

Pterostilbene has been noted to increase the signalling of PPARα receptors at 100µM (8-fold) and 300µM (14-fold) concentrations, with 100µM of pterostilbene being 74.2% more effective than 100µM ciprofibrate as assessed by relative luciferase units.[33] At concentrations of 1-10µM pterostilbene, the receptors were mostly inactive.[33] Since pterostilbene is known to bind to PPARα[34] it appeared to be an agonist of this receptor.

Pterostilbene may be a PPARα ligand

Oral ingestion of pterostilbene at 25mcg/kg of the diet of hamsters with high cholesterol is able to subsequently reduce LDL-C (29%) and increase HDL-C (7%),[33] and reductions in LDL-C (57%) and improvements in HDL-C (73.1%) have been noted in diabetic rats given 40mg/kg pterostilbene.[35]

HDL cholesterol was noted to be unchanged overall, but in people not on cholesterol medication taking the higher dose of pterostilbene there was a decrease relative to control.[32]

High doses of pterostilbene supplementation (50-125mg twice daily) appear to increase, rather than decrease, cholesterol and LDL levels in subjects who already have high LDL concentrations; those not on cholesterol lowering medications also noted a decrease in HDL cholesterol

Serum triglycerides were reduced by 30% following six weeks of supplementation with 40mg/kg pterostilbene in diabetic rats, the potency exceeding that of 500mg/kg metformin but not fully normalizing relative to nondiabetic control.[35]

In humans (hypercholesterolemic but with normal triglycerides) given 50mg or 125mg pterostilbene twice daily over the course of 52 days, there were no observable changes in serum triglyceride concentrations relative to control; the addition of 100mg grape seed extract to the low dose group also did not confer any beenfits.[32]

25mcg/kg of pterostilbene to the diets of hypercholesterolemic hamsters is able to reduce blood glucose by 14%[33] and in diabetic rats 40mg/kg pterostilbene for six weeks a reduction in glucose with a concomitant increase in insulin was noted;[35] this extended to otherwise healthy rats to a lesser degree (6.3% reduction)[35] and in hyperglycemic rats the potency of pterostilbene (40mg/kg) is comparable to metformin (500mg/kg).[35][36]

Pterostilbene has been noted to inhibit LPS-induced PGE2 production from white blood cells with an IC50 value of 1.0+/-0.6µM (compared to the IC50 of resveratrol at 3.2+/-1.4µM)[3] and can inhibit iNOS activity in macrophages with an IC50 of 9.9µg/mL (comparable to resveratrol and weaker than parthenolide from feverfew at 0.42µg/mL).[14]

Pterostilbene may exert antiinflammatory effects at low concentrations with a potency greater than resveratrol; these effects may be relevant to oral supplementation of higher doses of pterostilbene

Neutrophils are known to produce oxidation when activated via the NADPH oxidase enzyme[37] which may lead to injury in excessive levels (despite being protective against bacterial invaders at lower activity);[38] resveratrol has previously been implicated as an NADPH oxidase inhibitor, and this activity appears to extend to pterostilbene as it can reduce chemiluminescence of neutrophils (an indication of antioxidant activity[39]).[40] And while pterostilbene doesn't inherently affect superoxide levels in neutrophils,[41] 100µM is able to reduce superoxide production and subsequent myeloperoxidase (MPO) production to around 60% of control with lower concentrations ineffective.[41]

Reduced chemiluminescence has been noted in rats following ingestion of 30mg/kg pterostilbene (partial reduction), suggesting that the above is biologically relevant in higher doses to a small degree.[45]

Pterostilbene appears to reduce oxidation in neutrophils (the main mechanism of action of spirulina), although the effect seems to occur only at very high concentrations. It appears to be active following oral ingestion, but not to a large degree

30mg/kg pterostilbene in a rat model of arthritis has shown weak anti-inflammatory effects, having no significant effect on hind paw volume (a marker of edema) or MPO while minorly reducing chemiluminescence (a marker of neutrophil oxidation).[45]

Resveratrol has previously been noted to increase apoptosis via the Notch signalling pathway[46][47] (which induces Cyclin D1 and survivin as it is prosurvival[48][49]) which appears to extend to pterostilbene in lung cancer cells (A549) with an IC50 value on cell growth of 3.476µM.[50] Pterostilbene appears to reduce the Notch1-dependent survial while induces production of reactive oxygen species, leading to apoptosis.[50]

Pterostilbene appears to reduce viability of lung cancer cells in vitro, and does so at a concentration that is probably relevant to oral supplementation

The oxidative stress seen during the aging process in neurons appears to be attenuated with low dietary levels of pterostilbene (0.004-0.016% of the diet), with a potency greater than resveratrol.[31][52]

In mice, doses of pterostilbene up to 3,000mg/kg daily (500-fold the estimated human intake) have failed to exert any significant clinical or biochemical toxicity.[53]

Pterostilbene up to 250mg daily (125mg twice daily) in humans over the course of 6-8 weeks has failed to cause any biochemical or clinical signs of toxicity, with side effects not significantly different than placebo aside from one dropout due to worsening cholesterol[54] which may be related to an increase in LDL-C seen with this dose when tested elsewhere in hypercholesterolemic adults.[32]