What are flavones, catechins, anthocyanins, and those healthy plant compounds?

For the purpose of this article, we will break things down into 'tiers' for comprehension.

To investigate compounds further, please go through their respective pages.

The first tier is with the ultimate parent compound, the 'Flavonoid' and sometimes referred to as 'Vitamin P'. It is broken down into three subcategories based on how one ring is adhered to the center ring structure.

Image credit goes to this study, with some modifications for neoflavonoids.[1]

All the above compounds have ketone groups, which are oxygen atoms double bonded (indicated by an O connected by two lines) to a carbon that is not at the end of a chain, and somewhere in the middle of the structure.

All these structures had the phenyl group (outer ring) attached where a flavone should, at the 2 carbon. Slight modifications beyond this can change the molecule further, however. A flavone can be subcategorized into:

Although Anthocyanins fall under the flavanol/catechin category, they have two small changes (a double bond between C2 and C3 on the center ring, and a protonated oxygen on the same ring) that result in quite different effects in the body. Due to this, anthocyanins are sometimes seen as their own subcategory. 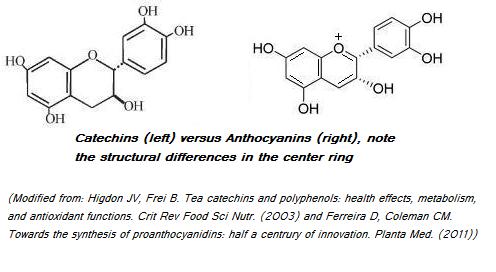 Not much is known about neoflavonoids at this point in time, thus succinct information about compounds derived from neoflavonoids is not available.

Other structures related to Bioflavonoids

If a bioflavonoid has a 5-carbon ring in the center rather than the typical 6-carbon ring structure, it is known as an Aurone.[2]

You are now following What are flavones, catechins, anthocyanins, and those healthy plant compounds?. You will be notified when any significant update is made.

This page features 2 references. All factual claims are followed by specifically-applicable references. Click here to see the full set of references for this page.