Should you take a multivitamin?

Although multivitamins can address multiple nutritional deficiencies, they don’t seem to help most people live longer. They may, however, benefit certain at-risk populations.

In other words, a multivitamin is a “cover all your bases” supplement — frequently sprinkled with additional ingredients (such as lutein, ginseng, or saw palmetto), often in too small doses to have any effect.

More than a third of Americans take a multivitamin,[1][2] but do we all need one?

Who needs a multivitamin?

In general, the people most likely to benefit from a multivitamin are those who are unable to consume a wide variety of foods — often for financial reasons. Unfortunately, if unsurprisingly, low-income individuals are also the least likely to spend money on a multivitamin.[3]

Additionally, a few specific populations (listed below) are commonly deficient in certain nutrients.

Current evidence suggests that, in high-income countries, multivitamins reduce the risk of the fetus being small for its gestational age, as well as the rate of defects in the fetus’s neural tube, urinary tract, cardiovascular system, and limbs. The quality of the evidence isn’t very high,[4] however, so those findings are still tentative. Moreover, since multivitamins contain many micronutrients, in different forms and quantities depending on the individual product, it is quite impossible to ascribe specific effects to specific micronutrients, unless those have been studied individually in pregnant women.

This is how we know that folic acid (artificial folate) is probably responsible for multivitamins’ reducing the rate of neural-tube defects[5] and the risk of fetuses being small for their gestational age.[6] Because folate plays an important part in fetal development,[7] pregnant women may benefit from the folic acid usually present in multivitamins. Of course, you can also buy folic acid as an individual supplement, or simply eat some of the numerous foods fortified with folic acid (many cereal-grain products, in the United States).[8][9]

Taken during pregnancy, multivitamins may reduce the risk for a number of birth defects, but the degree to which they do (and which micronutrients, aside from folic acid, are responsible) is uncertain.

Older people are more likely to find themselves deficient in some micronutrients, notably calcium and the vitamins B12 and D.[10][11] Yet, on the whole, the current evidence suggests that, in adults over 65, multivitamins don’t help reach common health goals such as reductions in blood pressure[12] or in cognitive decline.[13][14][15][16] [17]

Can multivitamins address the nutritional deficiencies linked to aging? Probably, but the tangible benefits aren’t clear. 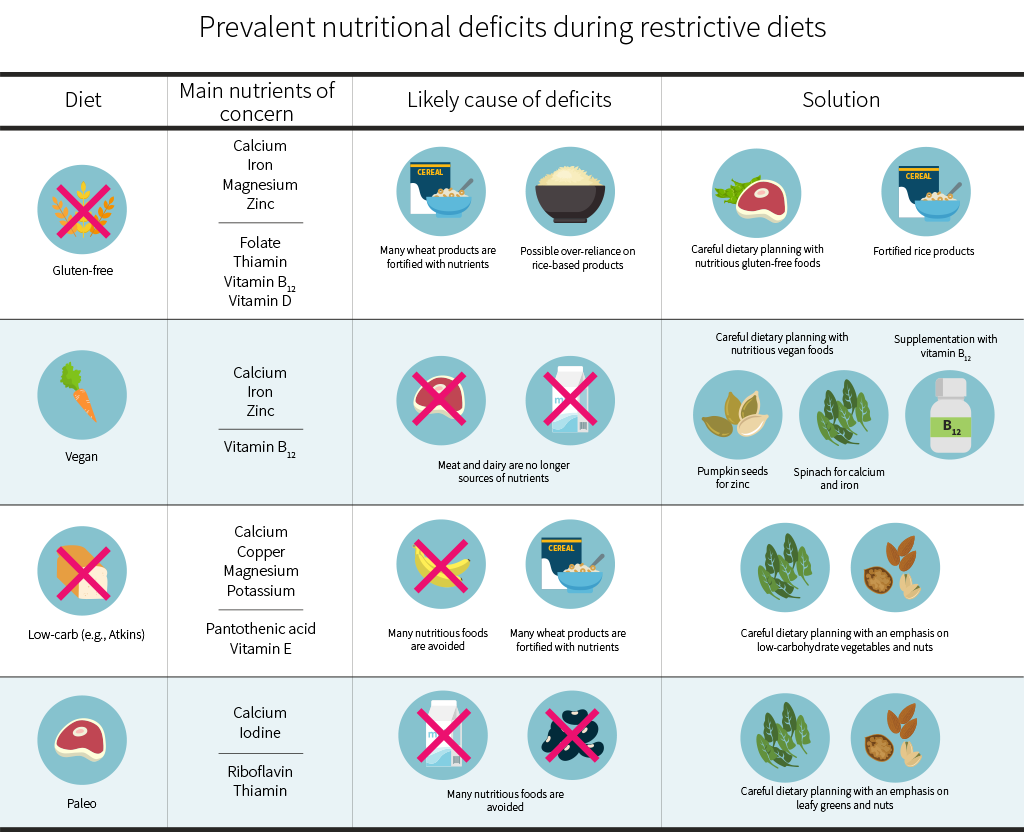 Restrictive diets — such as vegan diets,[18] gluten-free diets,[19] and some weight-loss diets[20] — make it harder to meet all your nutritional requirements. Still, those diets don’t necessarily require multivitamin supplementation: gaps in nutrient intake could be filled by better dietary planning or less restrictive versions of the diet.

Meeting all your micronutrient needs when on a restrictive diet requires good dietary planning. A multivitamin isn’t strictly necessary but could make things easier.

By reducing the size of the stomach, and thus nutrient absorption, bariatric surgery can produce broad nutritional deficiencies.[21] In people having undergone this surgery, a multivitamin will have reduced efficacy but should still help maintain good nutritional status.[22][23]

Celiac disease[24] and Crohn’s disease[25] carry a risk for nutritional deficiencies. This risk is likely due to the nutrients being poorly absorbed, in which case a multivitamin will be less effective than if the deficiencies were caused by low nutritional intake, as is the case with anorexia nervosa.[26]

Type 2 diabetes is associated with an increased risk of low magnesium levels[27][28] and other deficiencies.[29] Moreover, many type 2 diabetics take metformin, a pharmaceutical that can cause vitamin B12 deficiency.[30][31]

Other medications that may worsen nutritional status include (but are not limited to) the antibiotic gentamicin,[32] various diuretics,[33][34][35][36] and drugs that inhibit gastric-acid secretion.[37]

A number of diseases and medical issues can cause nutritional deficiencies; multivitamins may be a good choice as a catch-all in such situations.

Can multivitamins benefit the general population?

We’ve seen that multivitamins may benefit certain at-risk populations; but can’t they also benefit everyone else, in some way? Won’t taking a multivitamin make you less prone to some health issues? Won’t they, when all is said and done, allow you to live a little better, a little longer?

Many people take a multivitamin in the hope it’ll grant them a longer life.

The evidence doesn’t seem to support this. Multivitamins might reduce the risk of cancer in people with poor or suboptimal nutritional status,[38] but on the whole, trials evaluating multivitamins haven’t shown a decrease in the risk of cancer,[39] cardiovascular disease,[40][41] or other life-threatening diseases.[42][43]

Studies investigating the most popular compounds in multivitamins, the antioxidants, came to the same conclusion,[44][39][45][46][47] even though one of those studies reported a reduction in the risk of prostate cancer among (1) male smokers supplementing with vitamin E and (2) men with low dietary beta-carotene intakes supplementing with beta-carotene.[39]

However, while the current evidence suggests that multivitamins will neither lengthen nor shorten your lifespan, this tentative conclusion doesn’t extend to high-dose supplementation.

Multivitamins aren’t likely to help the average person live longer, but neither are they likely to shorten your life, as long as you don’t supplement with amounts that far exceed your Recommended Dietary Allowances (RDAs) of vitamins and minerals.

All right, so a multivitamin won’t likely add years to your life; but could it add life to your years? In other words, can taking a multivitamin give you more energy or make you feel happier?

Your brain, like all your other organs, needs nutrients to function properly. Deficiency diseases (such as anemia, scurvy, and pellagra) cause tiredness and mood issues, notably symptoms of depression.[50][51][52] Deficiency diseases are typically the results of severe deficiencies, however; so would a mild deficiency have a perceptible effect on your mood?

A 2013 meta-analysis of clinical trials[53] found that, when given multivitamins, adults without clinical disorders experienced mild improvements in anxiety, hostility, stress, fatigue, and clarity of thought. Improvements in depression, however, didn’t reach statistical significance.

Overall, this sounds like good news, but there are three caveats:

Since that meta-analysis was published, various other studies have examined the effects of multivitamins on mood.[54][55][56][57][58] These studies had mixed results but largely continued the trend of suggesting that supplementation with micronutrients can benefit mental health.

Multivitamins likely improve a number of subclinical mood symptoms in people whose nutritional status is low, but this tentative conclusion would need to be confirmed by a new review — one that would evaluate evidence quality.

A meta-analysis of clinical trials found a moderate reduction in the risk of progressing to the late stage of age-related macular degeneration (neovascular AMD or geographic atrophy) in people taking a multivitamin compared to people taking a placebo.[59]

Most of the good-quality evidence originated from one large, well-performed study — the Age-Related Eye Disease Study (AREDS).[60] The other studies included were small and of little weight.

AREDS had an average follow-up of 6.3 years, and only 2.4% of its 3,640 participants dropped out of the study. It used a combination of vitamin C (500 mg), vitamin E (400 IU), beta-carotene (15 mg), zinc (80 mg as zinc oxide), and copper (2 mg as cupric oxide). Most multivitamins contain these micronutrients, but in smaller amounts, so that the AREDS results may not translate to multivitamin use. On the flip side, supplementing with high-dose mixtures of antioxidants may not be without risk.[41]

It’s plausible that antioxidants (and micronutrients related to the body’s endogenous antioxidant systems) could reduce the risk of AMD by preventing oxidative stress in the maculae, but until the AREDS findings are replicated by another study, caution is warranted. More well-conducted clinical trials using doses of antioxidants closer to those present in multivitamins are also needed.

The same applies to cataracts. While there is some evidence that multivitamins may help, more well-conducted clinical trials are needed for confirmation.[61]

Multivitamins that include high doses of antioxidants may reduce the risk of cataracts and age-related macular degeneration, but more high-quality studies are needed to confirm this. Additionally, since high-dose antioxidants may be harmful, new studies should examine more reasonable doses.

Are there any clear downsides to taking a multivitamin?

First, consciously or not, too many people believe that, since they’re taking a multivitamin, they don’t really have to eat a balanced diet. You should remember, though, that nutritional science is still progressing — we might not yet know all the essential nutrients.

We do know, however, that foods can contain fiber, nitrates, or phytochemicals, among many other compounds that are, if not strictly essential, and least beneficial to our health. Although some multivitamins expand upon the basics and contain lutein, lycopene, or other extras, no pill can contain all the goodies a balanced diet will provide.

Second, a multivitamin taken every day for years can become a sizable expense.

If you eat a balanced diet, as you should, taking a multivitamin might have for sole result to make your urine more expensive.

What to look for when buying a multivitamin 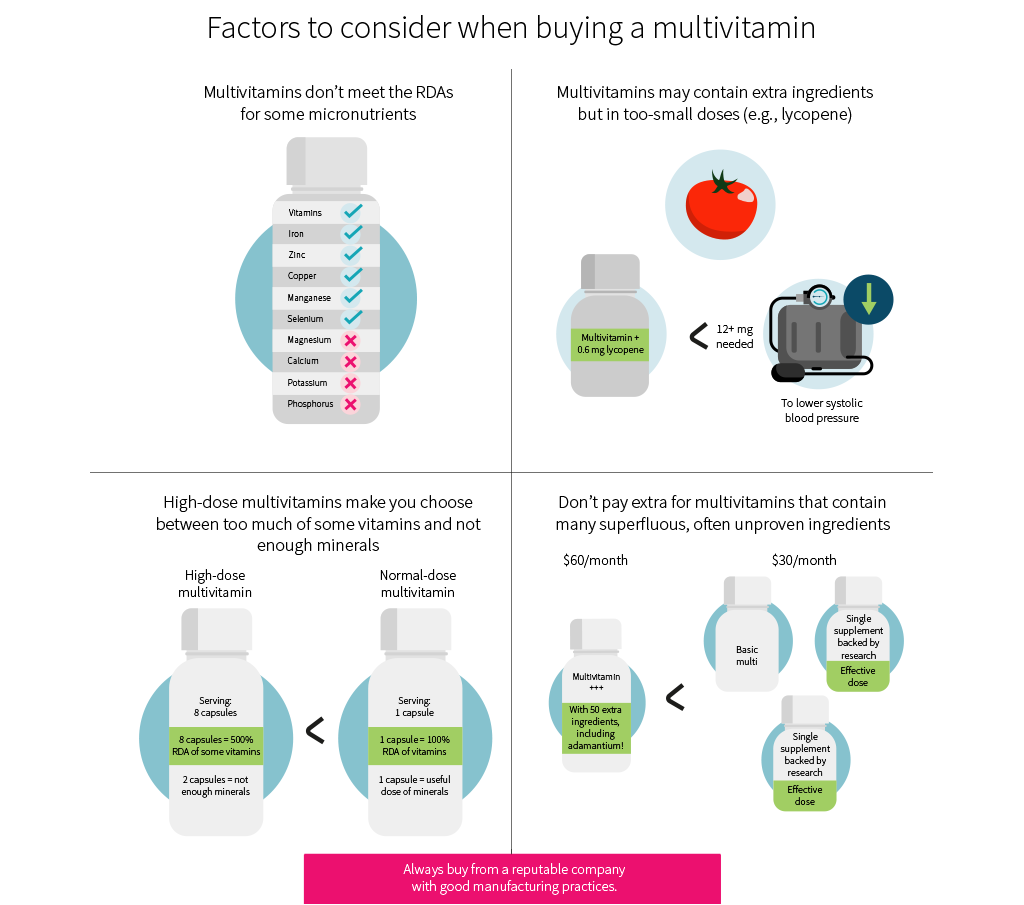 If you have decided to buy a multivitamin, then choosing one is relatively simple.

When buying a multivitamin, check on the label the content of each serving, the number of pills per serving, and the number of servings per day; don’t pay more for dubious bells and whistles; and stick to a company with a reputation for good manufacturing.

If you’re at risk for just one or two nutritional deficiencies, you may want to take an individual supplement (most vitamins and minerals are also sold individually) rather than a multivitamin.

Learn about the nutritional deficiencies that your lifestyle, health issues, or medications make you prone to, and perform a dietary self-analysis: for a week, write down everything you eat, then check the nutritional content of your foods. You can also, of course, get medically tested, but getting tested for every micronutrient can be costly, and blood tests are more reliable for some micronutrients (e.g., iron) than for others; so you should still perform a dietary self-analysis.

If you’re looking for step-by-step instructions that will help you target your supplementation based on your health goals, check out our Supplement Guides.