Wild Yam is most often used for

Dioscorea villosa is one of the species of yam referred to as ‘wild yam’. It is claimed to alleviate symptoms of menopause, but there is no evidence to support this effect.

Wild Yam is most often used for

Dioscorea Villosa is a tuber vegetable that is commonly referred to as 'Wild Yam' and appeared to be recommended for menopausal symptoms and menstrual complaints.[1] The family of Dioscorea refers to Yams in general, with Villosa sometimes being referred to as Wild Yam but the term 'Wild Yam' also being used to refer to many species such as deltoidea, versicolor, bulbifera, and triphylla.[2] The Yam most commonly bought and consumed in first world nations (White Yam) is Dioscorea rotundata with Purple Yams being Dioscorea Alata.

Dioscorea Villosa is one of many species referred to as 'Wild Yam', although the term 'Wild Yam' appears to refer to multiple species

Main component appears to be Diosgenin, and a variety of molecules which are Diosgenin bound to different glycosides; other steroidal saponins appeared to exist in this species of Yam 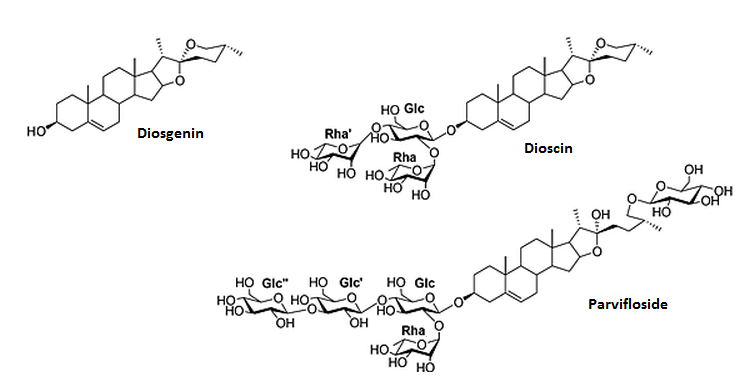 In a trial testing the efficacy of a cream containing Dioscorea Villosa (funded by the suppliers of the supplement, appears to have been conducted independently with no conflict of interest) noted decreased diurnal and non-flushing symptoms (22% and 33%, respectively) but not significantly different than placebo.[8]

An in vitro test assessing renal tubular epithelial cells (NRK52E) of the kidneys noted that the aqueous, methanolic, and ethyl acetate fractions were all able to exert toxicity to these cells and induced α-SMA expression, indicative of fibrotic effects.[9] When rats are fed a diet of 0.72% (790+/-60mg/kg) Dioscorea Villosa over a period of 28 days, although no macroscopic changes are noted with the kidneys there is mild renal tubulo-interstitial fibrosis that develops in a time dependent manner and the increase in α-SMA (and TGFß1) was observed at 28 days yet was sporadic previous to that.[10]

Macrophage accumulation was noted to be not significantly significant globally, but was increased in the glomeruli and interstitial spaces; in the liver, a significant increase was noted in the centrilobular veins and sinusoids.[10]

Preliminary evidence suggests that Wild Yam is weakly fibrotic, but that chronic intake of Wild Yam can result in small fibrosis of the kidney

In a large database screening of 374 alternative medicines (herbs, seeds, roots, plankton and fungi) for potential tumoricidal effects it was found that Dioscorea Villosa was the most effective at inducing apoptosis in the tested tumor cell line.[11] In an immortal neuroblastoma cell line (Neuro-2a), Dioscorea Villosa ethanolic extract possessed an LD50 of 19mcg/mL; the study noted that out of 374 tested compounds, only 54 were deemed to be strong (LD50 less than 528mcg/mL) and others in this category included Psoralea fruit, Green Tea, Ginger, Kava, Feverfew, and Black Cohosh as well as both Bloodroot and Dragon's Blood.[11]

Preliminary evidence suggests Dioscorea Villosa may confer anti-cancer effects, but not enough evidence exists to draw many conclusions on efficacy or safety

Diosgenin has thought to act like an estrogen mimetic due to its structural similarity to estradiol, the active form of estrogen in the body.[12]

A study in ovariectomized mice (to mimic menopause) failed to find significant alteration in uterine weight associated with dietary intake of 9.8-37.7mg/kg Diosgenin over a period of 20 weeks, suggesting a lack of estrogenic effects.[13] When mice were implanted with estrogen responsive breast cancer tumors in another experiment, the addition of Diosgenin failed to augment the growth of these tumors (another null result of estrogenicity) although it did not appear to hinder the growth either (possible lack of antagonistic effects).[13]

Does not appear to interact with estrogen; limited evidence

In TESTSKIN cells (a human 3D skin equivalent model), Diosgenin appears to enhance DNA synthesis to a similar potency as retinoic acid (active form of Vitamin A)[13] and at 10nM in human ketatinocytes (isolated from a 70 year old caucasian woman) it appeared to exert these effects via a cAMP dependent pathway (blocked by an inhibitor of adenyl cyclase) that is independent of both estrogen receptors and GPR30.[13]

When Diosgenin was given to (ovariectomized) mice at 0.01-0.04% of the diet for 20 weeks (totalling 9.8-37.7mg/kg), these mice appeared to have improved skin thickness with 0.04% similar to non-ovariectomized control; fat accumulation was not affected.[13]

One study suggesting Diosgenin can enhance skin thickness, which has been demonstrated following oral administration of Diosgenin to mice. In vitro, appears to be relatively potent and mediated by novel means

A rat study of safety with consumption of Dioscorea Villosa did not note any harm associated with 500mg/kg but the oral dose of 2000mg/kg was able to induce hypoactivity, piloerection and dyspnoea.[3]

There is limited evidence to suggest adverse effects to the kidneys and liver, which are outlined in the subsection on Kidneys (Interactions with Organ Systems).