Damiana Leaf is a part of the Tunera Diffusa plant which is traditionally used as an aphrodisiac and physical tonic. Not much evidence on this plant, but may be slightly effective in rat models of aphrodisia when coupled with fatigue.

Damiana Leaf is the common name of the plant Turnera diffusa Wild of the Turneraceae family. It possesses a history of aphrodisiac usage (usually brewed as a beverage[5]) where it is known to grow, in Central and Southern America. Although diffusa is the species, this herb is sometimes called Turnera aphrodisiaca due to its reported aphrodisiac properties.[6] Other properties attributed to the plant include stimulant and diuretic properties, as well as being a laxative and kidney tonic.[6] 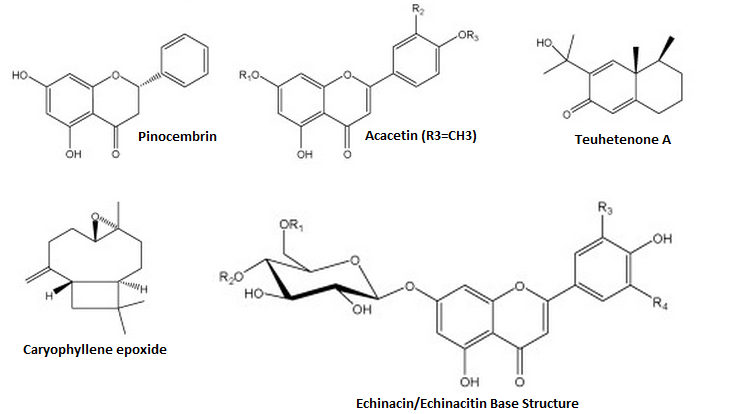 Damiana Leaf (methanolic extract) was found to, in vitro, inhibit the aromatase enzyme with an IC50 value of 63.1mcg/mL.[7] Compounds from Damiana were tested in isolation, and both pinocembrin and acacetin appeared to be effective in inhibiting 50.5% and 42.6% of aromatase activity at 10μM concentration and having IC50 values of 10.8μM and 18.7μM, respectively.[7] These results were weaker than the active control of aminoglutethimide (5.4+/-0.3μM).[7]

In a model of sexually exhausted rats (after 24 hours of ad libitum copulation), Damiana Leaf at 80mg/kg was able to improve mounting, ejaculations, and intromission in male rats with both 20 and 40mg/kg trending towards improvement but failing to be statistically significant.[12] The effects of Damiana were most pronounced during recovering copulation (shortly after copulation), and compared to the active control of Yohimbine at 2mg/kg bodyweight Damiana at 80mg/kg was equally effective at aphrodisia but with a mixed comparison on their pro-erectile effects.[12] These aphrodisiac effects have only been noted once elsewhere, with some benefit to sexually sluggish rats.[15]

Lacklustre evidence for the aphrodisiac properties of Damiana Leaf, despite historical usage

When tested in rats using an elevated maze-plus, only the methanolic extract of Damiana Leaf appears to be effective as an anxiolytic at 25mg/kg.[16] This is thought to be due to the Apigenin content.[17] When increasing the dose 12-fold above the effective anxiolytic dose, Damiana appears to have sedative properties.[18]

Some anxiolytic effects, possibly related to the Apigenin-related molecules, of unknown practical relevance

In a pain test in rats (tail-flick test), 10mg/kg Apigenin (one of the main bioactives of Damiana) appears to be approximately as effective as 5mg/kg Morphine Sulfate; the pain reduction was dose-dependent.[18] Given a 0.2% Apigenin content of Damiana, this correlates to quite a high oral dose (5g/kg, toxicology untested).

The bioactive appears to be a very effective pain killer, but the amount of Damiana that must be consumed to reach this level may be excessive and impractical

Damiana Leaf (methanolic extract) appears to be a weak phytoestrogen, acting on the estrogen receptor with 9% efficacy at 250mcg/mL; this was attributed to the compounds apigenin (7-O-β-d-glucoside), Z-echinacin and pinocembrin with IC50 values of 10, 20, and 67uM respectively.[7]

Damiana has been implicated in reducing gastric emptying rate, but the study in question used YGD capsules (Yerba Mate, Guarana, Damiana) and causation cannot be placed on Damiana.[19] YGD capsules have been associated with weight loss due to increased satiety.[2]

Arbutin isolated from Damiana Leaf at the dose of 30 or 60mg/kg bodyweight for 14 days resulted in gastroprotective effects against an aspirin or an alcohol-induced induction of ulcers in mice, and Arbutin was associated with significantly less lipid peroxidation (MDA) and nitric oxide than both control and active control of omeprazole. Omeprazole (undisclosed concentration) was more effective at reducing the Ulcer Index when administered acutely.[20]

In a study on CCL4-induced liver toxicity, Damiana leaves failed to exert significant protective effects in a Huh7 cell line.[21]

One study assessing a variety of plants and their ability to induce relaxation on phenylephrine-induced corpus cavernosus contraction (a test for pro-erectile effects) noted inhibition of contraction in the range of 84-95% at 10mg/mL, which was deemed comparable to Damiana Leaf (although Damiana Leaf was not tested). these were more effective than the Viagra used as an active control, but the concentration of Viagra used was low (35mcg/mL).[22]

Isolated arbutin from Damiana Leaf at up to 2000mg/kg in rats for 2 weeks failed to show any signs of toxicity.[20]

This page features 22 references. All factual claims are followed by specifically-applicable references. Click here to see the full set of research information and references for Damiana Leaf.