Ku shen is most often used for

Sophora flavescens (Ku Shen) is a medicinal herb from China that appears to possess mostly anti-cancer properties. It may also inhibit the 5-Alpha Reductase enzyme and PDE5 potently, promoting hair growth and erectogenesis.

Ku shen is most often used for

The plant Sophora Flavescens is a Traditional Chinese Medicine that has been used for anti-tumor, viral hepatitis, enteritis, viral myocarditis, arrhythmia, and skin diseases.[1] It is sometimes referred to as Kushen or Ku Shen,[1] and within the context of Traditional Chinese Medicine is is known to have 'cooling' and antiphlogistic (anti-inflammatory) properties.[2]

With the polysaccharide fragment consisting of:

A variety of bioactives, but Matrine and the related two structures are the most commonly referred to molecules for being 'active' in Sophora Flavescens although some others (the prenylated flavanoids) may be bioactive

Matrine is also found in other species of Sophora including subprostrata (Shandougen),[12] tonkinensis [13] and alopecuroides (Kudouzi).[14] Matrine is sometimes used as a reference biomarker for quality of the Sophora plant family due to being in all species of this family.[15] 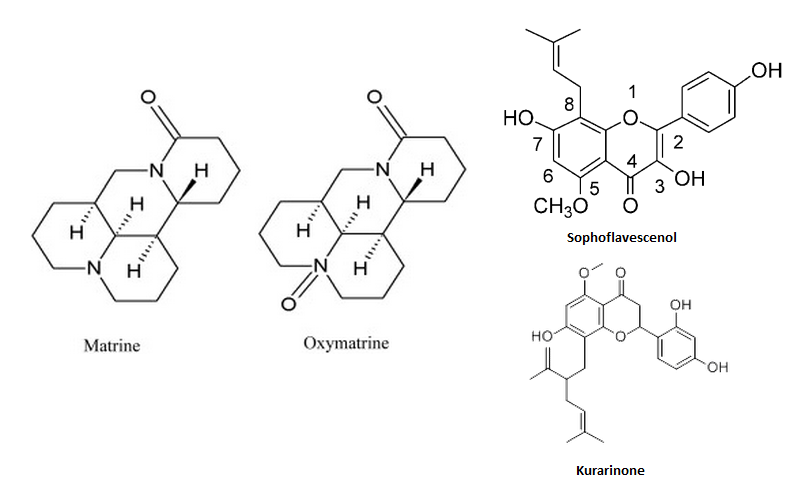 Pure Matrine (component of Sophora) appears to have an approximately oral bioavailability of 44% in rats.[16]

The hepatic extraction of Matrine appears to be low, with 0.27% of an oral dose being detected in bile acids after oral administration.[17][13] Matrine (and structurally related compounds) do not appear to undergo any significant metabolism after oral administration[18][3] except for the possible conversion of Oxymatrine to Matrine in the gastrointestinal tract prior to absorption.[18] When administered intravenously, Oxymatine is metabolized slightly into Matrine (approximately 19.1+/-5.4%, if judging by the AUC of Matrine relative to Oxymatrine).[19]

For the most part, Matrine does not get metabolized

In rodent models of cerebral ischemia, Sophora Flavescens appears to be protective against edema when pre-loaded (suggested to be from PKC inhibition).[20]

In models of focal ischemia, NF-kB inhibition appears to be the root of protective effects.[21] Infarct volume following ischemia is attenuated in a dose-dependent manner with 25-50mg/kg injected Matrine and the degree of infarct reduction correlated with the degree of NF-kB inhibition seen in vivo,[21] and thought to be via a preservation of cytoplasmic IκBα.

Similar protective benefits are seen with Oxymatrine, with connections to anti-inflammatory mechanisms[22] that are linked back to NF-kB,[23] and may also extend to a downregulation of TLR4, which was increased following ischemic injury and suppressed with 120mg/kg injections of Oxymatrine.[24]

Protective effects against brain injury (preventing some inflammation), but small in magnitude and studies in animals used injections of isolated Matrine in high doses; probably isn't too applicable to oral Sophora Flavescens ingestion

Oxymatrine has been implicated in attenuating the increase in an NMDA-receptor subunit (NR2B) in response to excitation, subsequently attenuating toxicity in glutaminergic neurons exposed to high levels of stimuli.[25]

Sophora Flavescens appears to inhibit the mRNA expression of human telomerase reverse transcriptase (hTERT) and subsequent activation of the Telomerase enzyme. This has been noted in cancerous colon cells (HT-29[26] and SW1116[27]) and two liver carcinoma cells lines (HepG2, QGY).[28]

Appears to inhibit telomerase, but currently all evidence is in cancer cell lines (where telomerase is sometimes disregulated); no evidence currently to suggest telomerase in inhibited in healthy cells and the notion that Sophora has life extension properties can currently not be supported

Inhibition of Aldose reductase is sought as a therapeutic avenue for diabetes to prevent diabetes-related side-effects such as retinopathy. In vitro, the flavonoid Sophoraflavescenol can inhibit both rat lens and human recombinant Aldose Reductase enzymes with IC50 values of 0.3+/-0.06 and 0.17+/-0.03uM, the latter being as potent as the active contorl Epalrestat.[10] The ability to prevent advanced glycation end products was more effective than Aminoguanidine (Pimagedine, drug once used for diabetic retinopathy).[10] The prenylated side-chain of Sophoraflavescenol may explain why it is more effective as an Aldose Reductase inhibitor than its base structure, Kaempferol.[29]

Matrine[21] and Oxymatrine[23] derived from Sophora Flavescens appears to be able to reduce NF-kB activation after injury, without influencing levels of nuclear NF-kB without inflammatory stimuli.

Other compounds have been found to inhibit TNF-α induced NF-kB activation (in HepG2 cells), which may be a possible mechanism explaining effects on NF-kB.[30]

Prenylated flavonoids from Sophora (Kurarinone) have been implicated in ERK/RSK2 inhibition, which disrupts inflammatory signalling from cytokines such as IL-6.[5]

One study using a purified polysaccharide (0.32% of dry weight; named SFPW1) noted that this polysaccharide was able to increase the cytotoxicity of macrophages (phagocytosis) towards an investigate tumor cell line; H22 cells.[11] This was accompanied by an immunostimulatory effect on macrophages, with an increase in NO and iNOS.[11]

One study in vitro with estrogen non-responsive Breast Cancer cells noted that disregulation of pro-inflammatory signalling could underlie anti-proliferative effects of Sophora Flavescens; contributed to the flavanoid Kurarinone.[5] Similar effects have been seen with Matrine, where in MBA-MB-231 breast cancer cells Matrine suppressed EGF/VEGF induced Akt/PI3K induction of NF-kB; all of which are pro-inflammatory mechanisms underlying breast cancer metastasis.[31] Akt has been found to be inactivated seconary to PTEN upregulation, which was increased due to a downregulation of mIR-21 (thought to be another mechanism of Matrine).[32]

One study showed synergism with Trichostatin A (Histone Deacetylase inhibitor) which has also been noted in lung cancer cells related to VEGF[33] and was also further synergistic with the COX-2 selective inhibitor Celecoxib.[31]

Appears to have anti-proliferative properties, and is synergistic with Trichostatin A and Celecoxib; histone deacetylase inhibitor and COX-2 inhibitor, respectively. No human or animal interventions

Nutraceutical options for HDAC inhibition (Sulforaphane) and COX-2 inhibition (Spirulina) may be synergistic, but this has not yet been demonstrated

Apoptosis reached 28.91% (0.5mg/mL), 34.36% (1mg/mL) and 38.80% (1mg/mL) in these HepG2 cells alongside increased expression of autophagic proteins Bax and Beclin-1, and these apoptosis rates were significantly attenuated with incubation with the inhibitor of autophagy 3-MA.[38] Apoptosis occurred at G1-phase of the cell cycle.[38]

Matrine appears to have inhibitory potential on androgen insensitive prostate cancer cells (PC-3)[39] as well as androgen-sensitive prostate cells (LNCaP).[40] In the latter study, concentrations of 0.5-2.0g/L isolated Matrine for 36 hours showed a dose and time dependent inhibition of proliferation up to 56.8% at the highest dose and time combination (2g/L for 36 hours), althougha more significant decrease was seen in androgen receptor content which was reduced by more than 50% at the lowest dose after 24 hours.[40] This downregulation of the Androgen receptor has been noted elsewhere.[41]

Matrine may be therapeutic against prostate cancer, but no research in animals currently; may work by normalizing excessive androgen receptor proliferation, but also appears to have some other mechanisms

Matrine from Sophora Flavescens appears to induce apoptosis in experimental Acute myeloid leukemia (AML) cell lines (HL-60, NB4, K562 and U937)[42][43] as well as cells taken from patients with AML with varying IC50 values of 0.56-0.99g/L and inducing 33-41.1% apoptosis depending on cell line (maximal values).[37] The underlying mechanism appeared to be through destabilizing the mitochondria, and were partially blocked by a caspase-3 inhibitor and a PI3K/Akt activator.[37]

When mice are injected with 50 or 100mg/kg Matrine 5 days after being injected with cancerous cells for a period of 17 days resulted in 87.0-89.6% reduction in leukemic tumor size; this was slightly less effective than 20mg/kg Cyclophosphamide.[37]

Injections of Matrine appear to be quite effective in inducing Leukemic cancer cell death, not significantly different than Cyclophosphamide (standard treatment). There is at least one rodent intervention for Leukemia

In A375 lung cells incubated with 0.25, 0.5, 1, or 2mg/mL Matrine, the higher concentrations (1+) was able to increase the percentage of cells that were apoptotic (19.66+/-0.77% at 1mg/mL; less than other cancer studies on Matrine) but greatly inhibited proliferation as assessed by MTT assay.[44] This inhibition of proliferation was dose and time dependent, and after 6 days 2mg/mL abolished (100% inhibition) cell proliferation assessed by MTT assay.[44] This reduction of proliferation was noted in A549 lung carcinoma cells as well, where 25-100mcg/mL reduced proliferation by 30-48%; concentrations below what is needed to induce apoptosis.[33] Reduced migration potential may be related to downregulation of the secretion of VEGF-A from cancerous cells to approximately 20% of control at 500mcg/mL,[33] VEGF-A being a signalling molecule that promotes migration in lung cancer cells secondary to PI3K/Akt.[45]

Apoptosis has been noted elsewhere induced in A549 cells, where 50-500mcg/mL reduced cell viability in a dose and time dependent manner (up to about 60% cell viability, a 40% reduction, with 500mcg/mL after 72 hours).[33] This study noted that Matrine reduced the Bcl-2/Bax ratio (via induction of Bax and downregulation of Bcl-2) and was synergistic with the Histone Deacetylase Inhibitor Trichostatin A at modifying Bcl-2/Bax and inducing apoptosis.[33]

Appears to induce apoptosis (regulated cell death) in lung cancer cells, but weaker than other cancer cells; Matrine does appear to have anti-proliferative potential. No interventions in living creatures for lung cancer

In rat prostate cells, type II 5-alpha-reductase enzyme activity was wholly abolished with incubation of 0.1% Sophora ﬂavescens and was inhibited by 50% with 0.001%.[46] When looking at molecules that appeared to inhibit the 5-AR receptor inherently, the most potent appeared to be norkurarinone and isokurarinone with an inhibitory rate of 51.4-94.2% at 50-200ug/mL and 54.4-97.1% at 50-200mg/mL, although many flavonoid compounds appeared to be inhibitory, especially at 200ug/mL.[4]

Appears to have inhibitory effects on the 5-Alpha Reductase enzyme potently; interactions with Androgen receptor and serum testosterone not known

Sophoflavescenol is currently only known to originate from Sophora Flavescens and Albizzia julibrissin (He Huan Hua in Traditional Chinese Medicine).[47]

It appears to be potently erectogenic, though the evidence is only mechanistic; there are currently no interventions using oral supplementation of Sophora Flavescens to assess the practical worth of Sophoflavescenol

In dermal papilla cells, a 50% ethanolic extract of Sophora Flavescens was able to induce IGF-1 and KGF (keratinocyte growth factor) when applied to the back of mice at 0.2mL of 1% Sophora Flavescens for 30 days, and was associated with earlier telogen to anagen phases.[46] In this study, HGF and VEGF were unaffected.[46]

Appears to have hair promoting properties when topically applied

Sophoraflavescenol (prenylated flavanol) from Sophora Flavescens appears to be a tyrosinase inhibitor[48] as do the compounds kuraridin, kurarinone and norkurarinol with IC50 values of 0.6-1.1uM, 1.3-6.2uM, and 2.1uM respectively[49][50] as well as Kuraninol[51] and Kuraridinol with IC50 values of 8.60+/-0.51 and 0.88+/-0.06uM[52] and Sophoroaflavanone G with an IC50 of 6.6uM.[49] Trifolirhizin was found to be fairly weak (506.77+/-4.94uM) in inhibiting tyrosinase, but when cultured in B16 melanoma cells it (as well as Kuraninol and Kuraridinol) were effective at suppressing more than 50% of Melanin synthesis (indicative of tyrosinase activity) at 50uM.[52] Kuraninol and Kuraridinol were found to be noncompetitive inhibitors, and the latter was 10-fold more potent than the active control of Kojic Acid.[52]

When tested against mushroom tyrosinase, the inhibitory potential of Sophora Flavescens appears to be greater than that of both Arbutin and Vitamin C (used as positive controls), but although Sophora outperformed 96/99 other herbs tested in this study it itself was outperformed significantly by both Morus bombycis and Rhus javanica gallnuts when comparing IC50 values.[53]

Several molecules, usually those in ethanolic extracts, appear to be moderately potent inhibitors of tyrosinase in vitro; this mechanisms is sought in cosmetics due to potential skin lightening effects. Currently, no interventions are published to assess practically relevant potency

ACAPHA (Antitumor A) is a botanical mixture of Sophora tonkinensis (2% Matrine or more by weight), Polygonum bistorta, Prunella vulgaris, Sonchus brachyotus, Dictamnus dasycarpus, and Dioscorea bulbifera; this combination appears to be able to reduce esophageal dysplasia almost 50% after 3-5 years of daily administration relative to placebo.[54] This mixture per se has also been associated with decreased tumor load (70%) and decreased tumor multiplicity (40%) in mice (p53 transgenic lacking tumor supressor gene) given the mixture.[55]

After oral administration of ACAPHA, it appears that Matrine is the only relevant molecule that is found in plasma; suggesting that the other herbs merely augment absorption.[13][56] When investigating absorption, 3.8g/kg of ACAPHA (0.4% Matrine) was compared to 15mg/kg Matrine (same oral dose of Matrine between groups) and no significant differences were noted in bioavailability; just a delay in absorption speed with ACAPHA.[13]