This page features 46 references. All factual claims are followed by specifically-applicable references. Click here to see the full set of references for this page.

The genus of Epimedium contain (specific plants in brackets): 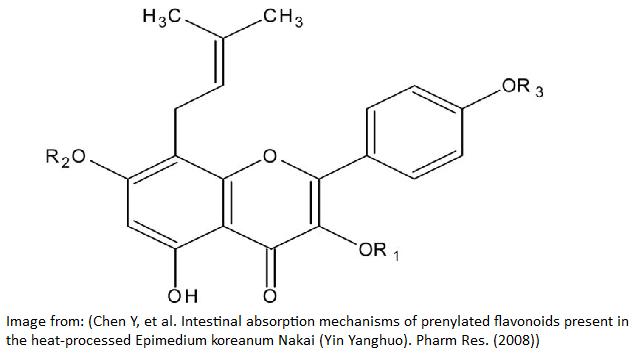 Icariin metabolizes to Baohuoside I, which is the same structure but with one less glucose moiety. The loss of the glucose moiety can more than double transit into the intestinal membrane.[9] The absorption of baohuoside (and other related compounds) is outranked by the fast efflux back into the lumen, an active transport mediated by MRP2 and BCRP (Breast Cancer Resistance Protein); inhibiting MRP2 may increase absorption of baohuoside I.[9] These receptors may possibly be overridden, as increasing the concentration of baohuoside I decreases the efflux efficiency.[9] When in the intestines, Baohuoside I does not appear to be further metabolizes, due to an apparent lack of appropriate intestinal glycosidases (in rats and vitro).[10][9]

Efflux of Icariin from the intestinal wall into the lumen occurs via P-glycoprotein efflux pumps.[9]

Fairly poor absorption in the intestines, but looks promising to combine Icariin with P-glycoprotein inhibitors such as Ecdysteroids or MRP2 inhibitors in regards to Icariin's metabolite, Baohuoside I

Icariin, if not absorbed, can be sent to the colon and transformed via bacteria into Icariside II, a potentially more erectogenic compound than Icariin.[11]

The pharmacokinetic profile of Icariin appears to be beneficially influenced by some herbs or components of herbs, we just don't know which ones specifically.

The major metabolic pathway of Icariin appears to be biliary excretion, or ejecting the Icariin with bile salts into the intestinal lumen to leave in the feces.[15] Coingestion of P-Glycoprotein inhibitors can reduce the elimination of Icariin,[15] possibly by the aforementioned inhibition of intestinal efflux.[9][16]

Icariin is able to cross the blood-brain barrier[17] and after intravenous injection, Icariin and the three diglycoside compounds (Epimedium A-C) are found in the brain, although mostly Epimedium C. Icariin appeared to be more localized to the sciatic nerve.[18] A study using Icariin liposomes intravenously found about 1.83% of the injected dose to be found in the brain after injection of 20mg/kg Icariin liposomes and neural levels exceeded 0.2mcg/g brain mass.[13]

It can get to the brain, but in a limited amount

Icariin also has the ability to act as a neuroprotectant via inhibiting pro-oxidant and pro-inflammatory markers in response to stress[19][20] and can attenuate cognitive decline induced by D-galactose injections at a dose of 60mg/kg bodyweight (injection).[21] In vitro studies suggest it can also protect neurons from damage induced by Lipopolysaccharide (a pro-inflammatory agent)[22][23] and theoretically against aging as assessed by a senescence accelerated rat model.[24] High dose oral Icariin (75-150mg/kg bodyweight) was associated with improved cognitive biomarkers such as superoxide dismutase and glutathione in these rats.[24]

In one study it was shown to exert protective effects via SIRT1 expression and subsequent PCG-1a expression.[25]

In vitro studies suggest that Icariin is more effective than Genistein at preventing osteoporosis as it is more osteogenic (bone-forming).[26] Similar effects have been observed in rats, although not in comparison to Genistein.[27] One study has been conducted in post-menopausal women with a combination of soy isoflavones (Genistein at 3mg, Daidzein at 15mg) with Icariin at 60mg a day for 2 years, and bone mineral density loss was greatly attenuated.[28]

Possible explanations for the above results (estrogenicity in females but not males) may lie in Icariin and related structures possessing both estrogenic and antiestrogenic activities, and the ultimate result being context dependent.[32]

Estrogenicity as it applies to Icariin and related compounds is complex, like many bioflavonoid-related compounds. It doesn't seem to be large enough of a concern to negate its potential usage as a Testosterone Booster, however.

One study using 200mg/kg (of a lower purity, 40%; bioequivalent to 80mg/kg) Icariin over 7 days noted that, in a chemically castrated group (average testosterone level of 0.78+/-0.44ng/mL) was able to increase testosterone to almost triple (10.93+/-2.03ng/mL) the control group (3.01+/-0.41ng/mL).[4] LH and FSH did not differ between groups, and the mechanism of action was hypothesized to be in the testes as previous studies on rats without testes showed absolutely no changes in serum testosterone,[36] although the difference in dosage is also a possibility, as one study was conducted on cavernous crushing noted some difference at 1mg/kg bodyweight, and higher doses were insignificantly suppressive relative to control.[36]

The above oral dose of 80mg/kg pure Icariin, after conversions to humans based on Body Surface Area,[1] appears to be 12.8mg/kg bodyweight Icariin or 1163mg Icariin daily for a 200lb human.

Seems to have the mechanisms to increase testosterone, but no human studies exist on the subject matter.

Icariin is a selective PDE5 (enzyme) inhibitor[37] with an IC50 value between 0.75-1.1mM depending on PDE5 isoform[37] and an EC50 of about 4.62mmol/L in increasing cGMP in the corpus cavernosum of the penis;[38] Icariin has approximately 100-fold greater affinity for PDE5 than other PDE isozymes.[39] This effect can be potentiated by the modification of two hydroxyethyl ether moieties to the compound, which increase this inhibition 80-fold,[40] but this modification is not naturally occurring. At 10mg/kg bodyweight in mice (110mg for a 150lb human) Icariin exerts pro-erectile properties[36] and seems to have more effectiveness following repeated doses.[35][36] It has shown efficacy over 30 days at 5-10mg/kg in an animal model of erectile dysfunction related to blood flow,[41] which correlates to a 55-110mg dose for a 150lb man.

Other compounds in the Epimedium family that have PDE5 inhibitory potential are Icarisid II derived from Epimedium wanshanense (not significantly different in potency than Icariin; approximately half of Viagra)[42]

Secondary to PDE5 inhibition, Icariin appears to be a potent pro-erectile agent. It is clearly outperformed by Viagra

Lower doses (1-5mg/kg) are able to improve neuronal Nitric Oxide Synthase (NOS) expression[36] and inducible (iNOS) expression[35][36] content in addition to PDE5 inhibtion. Effects on iNOS and nNOS do not appear to differ greatly from each other at the dosages of 1mg, 5mg, and 10mg/kg bodyweight,[36] suggesting low doses could also exert benefit but by different means.

Icariin may also promote Nitric Oxide signalling via increasing expression of NOS enzymes, which may work synergistically with the PDE5 inhibition

Icariin has also been linked to increasing neurite growth of major pelvic ganglia in vitro[36] which may be downstream of P13K and MEK/ERK activation.[43]

Beneficial effects on neurons may extend to the pelvis

Yohimbine has also been researched into its properties as an erectogenic (boner pill). A study conducted in yohimbine and sildenafil (Viagra), which shares the same PDE5 inhibitory mechanism as Icariin, found that they were synergistic in regards to increasing intercavernous pressure and erections.[44]

P-Glycoprotein inhibitors such as ecdysteroids or capsicum carotenoids are able to inhibit the efflux protein known as P-Glycoprotein. This efflux protein is responsible for ejecting Icariin into the intestinal lumen after it has been absorbed[9] which is also its main excretory pathway when connected to bile acids to prevent reuptake.[15] Coingestion of Icariin with a P-glycoprotein inhibitor increases the AUC of Icariin, and could plausibly increase the bioactivity of Icariin (although this has not been demonstrated).[15]

P-Glycoprotein inhibitors may increase the bioavailability of Icariin

No designated toxicology studies have been conducted on Icariin, although the highest dosage used in rats currently is 200mg/kg bodyweight Icariin for 7 days which showed no signs of clinical toxicity.