This page features 5 references. All factual claims are followed by specifically-applicable references. Click here to see the full set of references for this page. 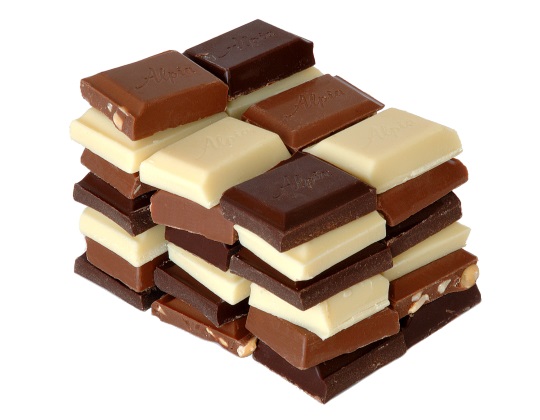 A recent study has revived the supplement market’s interest in a compound called (-)-epicatechin, a molecule found in chocolate. This molecule is claimed to be a myostatin inhibitor. Myostatin deficiencies are well known for their biggest side effect: greatly increased muscle mass without the major side-effects associated with anabolic steroids. Hindering myostatin’s actions would be able to replicate this effect.

While there are a few supplements that are known to interact with myostatin signaling (like sulforaphane), none had been tested in the context of human supplementation, until now.

This recent study examined the effects of (-)-epicatechin when supplemented by people.[1] Already, new supplements are popping up on the shelves, containing (-)-epicatechin and claiming to be myostatin inhibitors.

Myostatin and follistatin both have potential to alter muscle growth rates, but supplements and foods affecting these molecules have limited evidence in humans.

Should you supplement (-)-epicatechin or eat more chocolate to build muscle? Let’s dissect the study and find out.

The first part of the study was done in vitro, meaning outside the body in a test tube or petri dish. Scientists assessed muscle cells taken from people of different ages. When people age, their muscles tend to have higher myostatin levels and lower follistatin levels. The in vitro part of the study confirmed this relationship.

Two weeks is not enough time to notice any changes in muscle tissue mass, so researchers did not measure it.

Though a minor (7%) increase in hand grip strength was observed, muscle tissue mass was not measured, and there was no placebo group for comparison.

This study fulfilled the goals of a proof of concept study, because it provides evidence to suggest a possible relationship between (-)-epicatechin, follistatin, and myostatin levels, which can be investigated in future studies.

A recent study is the first to show that supplemental (-)-epicatechin increases the follistatin to myostatin ratio in humans.

The biggest difference between this study and the new myostatin supplements are the doses. The study used a 150 mg daily dose, while the supplements range from 250 - 500 mg (-)-epicatechin per dose, for a total daily dose of 500 mg - 1,000 mg.

For pure cocoa powder, you'd need roughly 100 g. Milk and white chocolate have a much lower cocoa content and subsequently, contain little to no (-)-epicatechin.

It's possible that the other compounds in chocolate could confer similar benefits and less chocolate would be needed for an effect, but this could only be shown through studies using chocolate specifically. For now, supplementation is the best bet to ensure you get the studied dose.

It’s difficult to obtain the studied levels of (-)-epicatechin by consuming dark chocolate or even pure cocoa powder. Supplementation is the surest bet to get an effective amount.

Keep in mind, this study had a very small sample size, just six people, and there was no placebo control. Furthermore, only the ratio of myostatin and follistatin changes were published, not the actual numbers. This study does not provide evidence to recommend (-)-epicatechin as a muscle growth agent, but it does lay the groundwork for future research and suggests (-)-epicatechin is a promising muscle growth supplement.

Since (-)-epicatechin provides other health benefits and is very safe, it is possible to test this potential muscle growth agent for yourself by eating dark chocolate twice a day.

In the future, (-)-epicatechin may be a novel and exciting muscle growth enhancing compound, but there is not enough evidence to recommended it as a dedicated dietary supplement today.

Due to the preliminary nature of studies, there is not currently enough evidence to support (-)-epicatechin for muscle growth. However, dark chocolate is safe and provides other health benefits, so consuming it regularly may not be a bad idea.

You are now following Does dark chocolate’s epicatechin content promote muscle growth?. You will be notified when any significant update is made.

This page features 5 references. All factual claims are followed by specifically-applicable references. Click here to see the full set of references for this page.