Some of the proposed mechanisms by which red meat intake may increase the risk of cardiovascular disease and diabetes is by causing inflammation and negatively affecting glycemic control[4]. However, much of the evidence is observational and inconsistent. In view of the contradictory evidence from highly heterogeneous observational studies, a meta-analysis of randomized controlled trials is important for examining the causal impact of red meat intake on glycemic control and inflammation. The present study was a systematic review, meta-analysis, and meta-regression of randomized controlled trials examining the effect of total red meat consumption, including both processed and unprocessed red meat, on glycemic control and inflammation among people without diabetes or diagnosed cardiometabolic diseases.

Red meat intake has been identified as a risk factor for cardiometabolic diseases. One of the proposed mechanisms by which red meat may impart risk is by worsening glycemic control and increasing inflammation. The present study was a systematic review and meta-analysis and meta-regression of randomized controlled trials examining the effects of consuming at least 0.5 servings of red meat per day vs. less than 0.5 servings of red meat per day on biomarkers of glycemic control and inflammation in adults with no reported cardiometabolic disease.

The study under review was a systematic review and meta-analysis of methodologically highly heterogeneous randomized controlled trials examining the effect of red meat intake on glycemic control and measures of inflammation. In the present study, red meat was defined as all forms of beef, pork, lamb, veal, goal, and non-bird game (i.e. venison, bison, elk). The study was registered through PROSPERO and followed PRISMA[5] guidelines.

This study included randomized controlled trials in adults (19 years or older) without diagnosed cardiometabolic disease at baseline. Studies were excluded if they included women who were pregnant or lactating and studies that were unable to determine the red meat intake amount. Studies were included if they reported at least one or more of the following variables: fasting glucose, insulin, homeostatic model assessment of insulin resistance (HOMA-IR), glycated hemoglobin (HbA1c), C-reactive protein (CRP), or pro-inflammatory cytokines, including interleukin-6 (IL-6) or tumor necrosis factor alpha (TNF-α).

There was no singular defined primary outcome for this meta-analysis, but the researchers reported the results for the effect of red meat on glucose, insulin, HOMA-IR, CRP, IL-6, and TNF-α. Subgroup analyses were performed to reduce potential heterogeneity and to examine the effect of other confounding variables on the outcomes (e.g. energy deficits, processed red meat, participants with obesity). Red meat consumption was a dichotomous variable, expressed as at least vs. less than 0.5 servings per day, based on previous observational data[6] suggesting that consumption of more than 0.5 servings per day is associated with increased mortality. Additionally, a dose-response meta-regression was also performed to examine how increasing intakes of red meat would affect glycemic control and inflammation.

The quality (internal validity) of each of the included studies was assessed using the National Heart, Lung, and Blood Institute’s Quality Assessment of Controlled Interventions Studies, which provided each study a score of good, fair, or poor. Publication and selection bias was investigated through funnel plots and Egger’s regression test. Heterogeneity was assessed using the chi-square test and I2 values were presented for some of the findings. Sensitivity analyses were also performed to examine the robustness of the findings.

The study included 19 studies for the meta-analysis, with 24 studies included in the meta-regression. Among the 24 studies, there were 20 unique randomized trials. Total red meat consumption ranged from 71 to 215 grams per day during red meat diet periods, and interventions ran from 3 to 16 weeks in length. Other study characteristics are laid out in Figure 1. 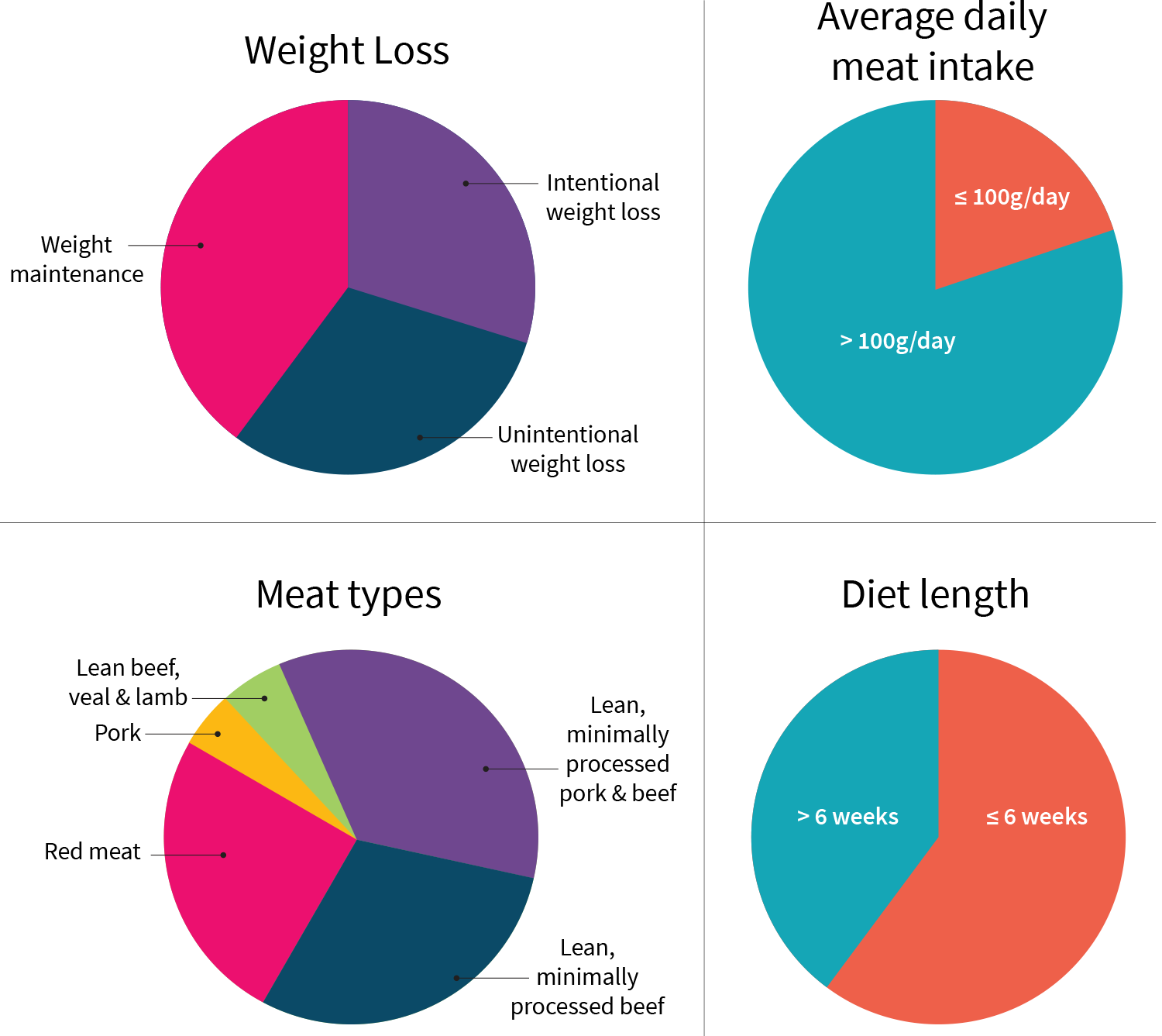 The study under review was a systematic review with meta-analysis and meta-regression analyses of randomized controlled trials examining the effect of red meat on glycemic control and inflammation in participants without diagnosed cardiometabolic diseases. Study quality, publication bias and heterogeneity were also assessed.

There were no significant differences between groups for any of the outcome variables of interest. The specific between-group differences (all not statistically significant) are laid out in Figure 2.

The meta-regression revealed no evidence of a dose-response relationship between total red meat intake and changes in any of the glycemic control variables or markers of inflammation. Furthermore, baseline BMI or baseline outcome variables did not substantially affect the outcomes.

Red meat intake did not affect glycemic control or inflammation whether examined as a dichotomous variable (at least vs. less than 0.5 servings per day) or in a dose-response manner. There were no major changes in the results when the researchers analyzed by subgroup or by baseline variables that may have confounded results.

The present experimental data suggest that red meat consumption does not affect glycemic control or inflammation among people who have not been diagnosed with a cardiometabolic disease, based on studies that were less than 16 weeks in duration. These findings held even among subgroup analysis and sensitivity analysis, suggesting that these findings hold up across various groups of people (e.g. individuals with obesity), diet types (e.g. carbohydrate content), and even between processed and unprocessed red meat. As such, these findings suggest that red meat intake alone, as a dietary variable, does not substantially affect glycemic control or inflammation in people without already established cardiometabolic diseases. However, given that the studies included in the meta-analysis ranged from 3 to 16 weeks in length, the present study does not provide insight into longer term red meat consumption.

These data are in line with previous meta-analyses of randomized controlled trials examining the effect of red meat intake on other metabolic variables, specifically blood lipids. For example, one meta-analysis[7] found that red meat intake did not affect measures of blood lipids, lipoproteins, or blood pressure. Another meta-analysis[8] found that red meat did not substantially alter cardiovascular risk factors, unless it was substituted for plant protein, but no other protein sources. The latter is interesting, because subgroup analysis in the present study also supports this finding, as the present study found no benefit when substituting red meat for poultry. However, the present study did not find that substituting red meat for plant protein had any effect.

This study leaves many unanswered questions, as red meat intake does appear[2] to increase the risk of type 2 diabetes[9] in observational studies, but the present study does not show an increase in risk factors associated with type 2 diabetes in randomized trials. In that, it is worth considering that claims of alleged pro-diabetic effects of red meat are based almost exclusively on epidemiological research. Furthermore, one of the most important questions in the context of determining a causal relationship outside of highly controlled RCTs is the unanswered question as to what the mechanism(s) by which red meat increases the risk of diabetes and/or cardiometabolic diseases actually are. In fact, a possible explanation for the epidemiologically observed detrimental effects of red meat is the clustering of established pro-diabetic and pro-CVD lifestyle factors. Specifically, people who eat more red meat are also more likely to smoke[10], have a higher BMI[11], consume more processed foods, have high levels of inactivity, and consume lower amounts of fruits, vegetables, and fiber[6] in their diet. While many studies try to adjust for this association, it is by no means clear that the observational data is not critically compromised by confounding.

There are several limitations of the present study that should be taken into consideration when interpreting the findings. The trials included in this study all had a duration of less than 24 weeks, with a median length of 8 weeks. As such, the present study may have not been able to detect changes in inflammation or glycemic control if the effects of red meat take years or decades to manifest. Additionally, heterogeneity was high for the results that it was reported for, suggesting there was high variance in outcomes between studies.

The present study is supported by other experimental studies and corresponding meta-analyses showing that red meat intake does not affect cardiometabolic risk factors, including glycemic control and inflammation. Currently, one possible explanation for the link between red meat and disease risk is that other lifestyle risk factors like smoking and a chronic energy surplus are more likely to be observed among people with high red meat intake.

Q. What effect does red meat have on cholesterol?

A previous meta-analysis[7] performed by the same research group as the present study found that higher red meat consumption did not negatively affect HDL-C, LDL-C, or triglycerides.

Q. What are ways I can lower the amount of advanced glycation end products in the meat I consume?

This systematic review and meta-analysis of randomized controlled trials suggests that red meat intake over a short time frame (less than 24 weeks) does not affect glycemic control or inflammation. These findings were derived from studies that recruited adults not diagnosed with either diabetes or cardiometabolic diseases. Furthermore, dose-response analysis demonstrated that there were no observed increases in fasting glucose, fasting insulin, HOMA-IR, or inflammation even at intakes of up to 250 grams per day.