Do we compensate for the calories burned through exercise? Original paper

After adjusting for age, sex, fat mass, and fat-free mass, for every 100 calories burned through exercise, people burned 28 fewer calories through their basal metabolic rate.

This Study Summary was published on October 3, 2021.

Total daily energy expenditure (TDEE) includes four components: basal metabolic rate (BMR), thermic effect of food (TEF), nonexercise activity thermogenesis (NEAT), and exercise energy expenditure (EEE). While many people assume that an increase in EEE leads to an equal increase in TDEE, we tend to adapt to the metabolic demands of physical activity through reductions in both BMR and NEAT (as well as by eating more).[1][2][3] However, the extent of this “energy compensation” is unclear.

(This “0.9 × TDEE” represents TDEE after accounting for TEF, which is assumed to account for ≈10% of TDEE.)

The authors used mathematical models to assess the relationship between TDEE and BMR and between AEE and BMR, after accounting for age, sex, fat mass, and fat-free mass.

The doubly labeled water method, first described in 1955 and used in humans in 1982, is the gold standard for assessing energy expenditure under daily living conditions. It’s based on the difference between the turnover rates of the hydrogen and oxygen of body water as a function of carbon dioxide.

The participants consume doubly labeled water (2H218O) to enrich their body water with heavy oxygen (18O) and heavy hydrogen (2H). Later, 18O is lost as both water (H2O) and carbon dioxide (CO2), whereas 2H is lost as water only.

Thus, by assessing the 18O and 2H turnover rates of body water from blood, saliva, and urine samples, investigators can determine the 18O lost via CO2 production to determine CO2 production and thereby energy expenditure.[5][6] 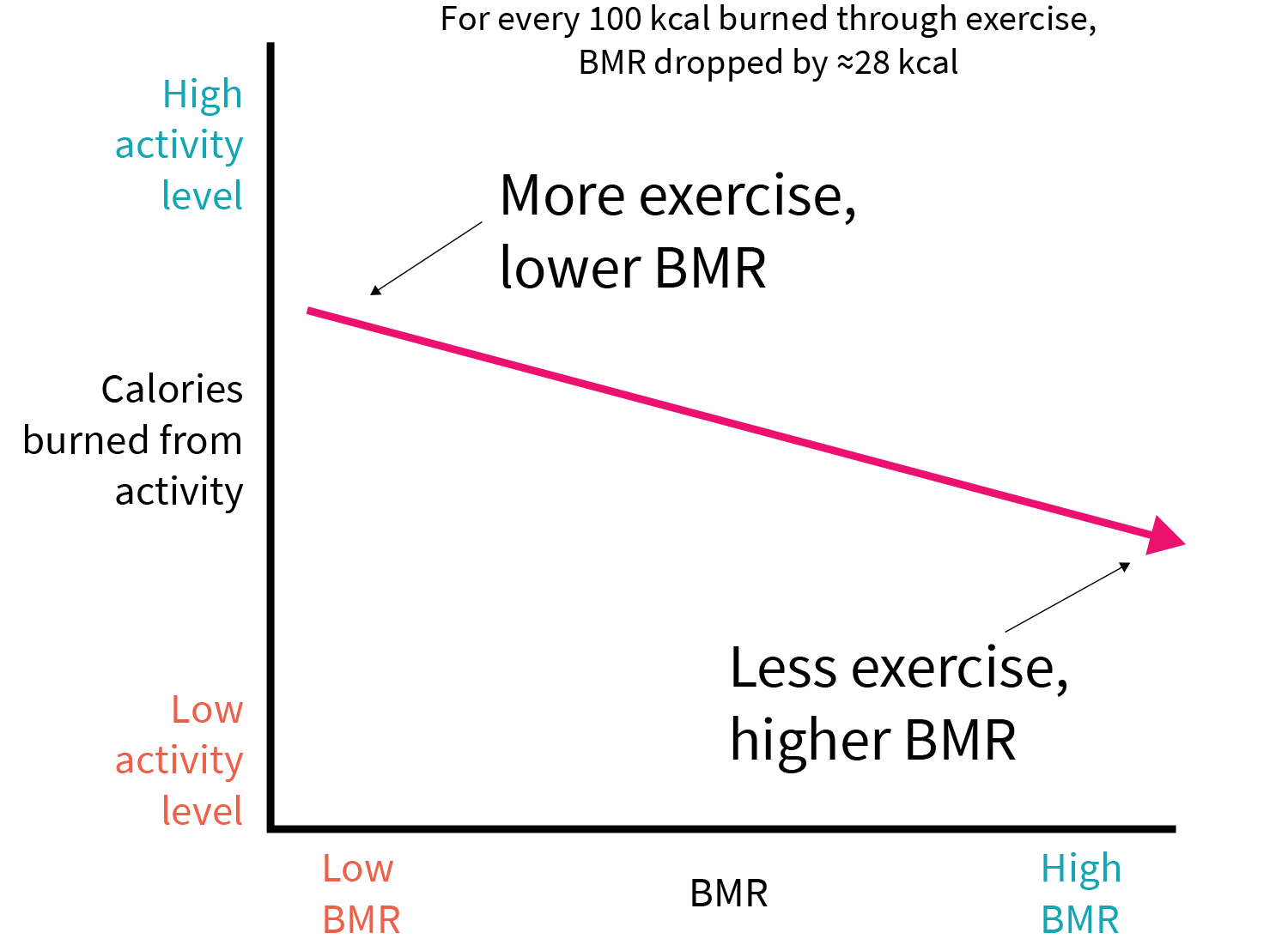 Note: While exercise might have a smaller effect on TDEE than predicted, it still plays a critical role in weight management. EEE ultimately did increase TDEE, and other research has demonstrated that combining diet and exercise can preserve fat-free mass,[7] which is the primary modifiable determinant of BMR.[8]

The big picture: This study is consistent with other research suggesting that the relationship between EEE and TDEE isn’t linear. The “constrained total energy expenditure model” suggests that, while EEE increases TDEE at relatively low activity levels, TDEE plateaus at higher EEE levels as the body adapts to maintain TDEE within a narrow range.[9]

While the present study suggests that this adaptation to EEE occurs at the level of BMR, other studies show that several physiological responses play a role in energy compensation. In a 2019 randomized controlled trial (RCT), 171 people were divided into three groups: 20 kcal of exercise per kilogram of body weight per week (20 kcal/kg/week), 8 kcal/kg/week, and no exercise. Both exercise groups partially compensated for the calories burned through exercise by eating more, with no changes in BMR or NEAT.[2] However, a secondary subanalysis of that study performed a more in-depth analysis of energy expenditure and reported that adaptive changes in NEAT occurred in the 20 kcal/kg/week exercise group.[3]

This study is consistent with other research suggesting that exercise alone (i.e., without dietary changes) is an inefficient fat-loss method. In a 2011 RCT, 439 postmenopausal women found that the participants following both a diet and an exercise program lost more weight and body fat than the participants following only the diet or only the exercise program.[10] A 2014 meta-analysis of RCTs found that interventions combining diet and exercise resulted in greater reductions in body weight, fat mass, waist circumference, and waist-to-hip ratio than exercise alone.[11] Another 2014 meta-analysis of RCTs found that behavioral weight management programs combining diet and exercise resulted in greater weight loss than programs focusing on exercise alone.[12]

This Study Summary was published on October 3, 2021.