Is bagged lettuce worth the safety risk?

Pre-bagged lettuce is among the biggest culprits when it comes to food poisoning. It faces multiple contamination points at farms and in factories. Certain populations may want to avoid it in favor of unbagged lettuce.

Why is this an issue?

A nation-wide romaine lettuce recall ended in May of 2018, and it was a really big deal.

In fact, it was the biggest multistate outbreak since 2006. Nearly 200 romaine lettuce eaters got sick by the time everything was over. Half of them were hospitalized, and five people died. 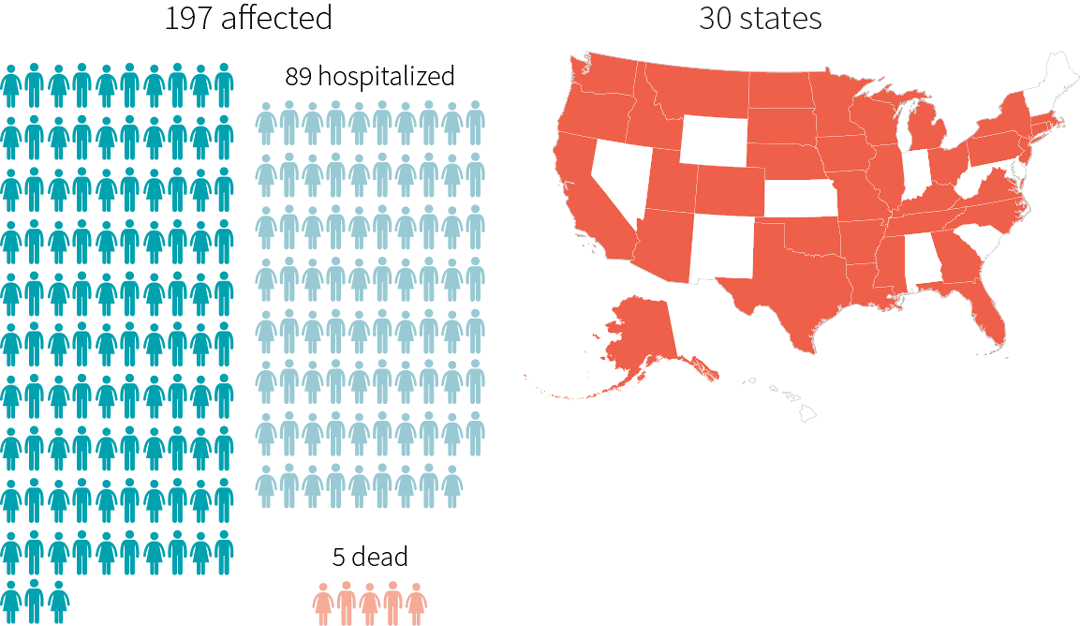 Note: These are the final numbers at the end of the recall; the video numbers derive from the statistics during the recall at the time of video production.

So … is bagged lettuce safe? Ever since the recall, triple washed lettuce just doesn’t seem as hygenic as it used to. Let’s quickly go over the evidence. We’ll start with some reasons to be alarmed, then balance it out with reasons not to freak out, and finally go over some practical tips.

Reasons to be alarmed

Leafy veggies were responsible for 22 percent of foodborne illnesses in the last decade, the same as all meat and poultry combined.

For comparison, fish and shellfish were at just six percent. That includes things like suspect grocery store sushi and raw oysters. These kinds of foods, along with burgers and raw eggs, historically have been associated with food poisoning. But leafy veggies have caught up in the past few years.

Keep in mind that many cases of leafy-green food poisoning probably aren’t even reported, since people are more likely to suspect the meat than the lettuce when eating a mixed meal.

2. Lettuce is especially susceptible to bacteria

Leafy greens grow close to soil, so they’re pretty easily contaminated. Chlorine washes are meant to kill these pathogens, but studies have shown that these sprays are only partly effective.[1]

3. There are many possible contamination points

Possible contamination spots start at the farm, and continue on at the factory.

Contamination can come from just one farm worker not washing their hands, and other contamination routes abound (such as birds flying over head and pooping on crops, dried manure blowing in the wind, or even feral pigs roaming into the field).[2][3][4]

Once at the factory, cutting lettuce causes liquid to be released, causing bacteria to stick to the plastic bag. This can trap bacteria onto the lettuce so strongly that it can’t be washed off.[5]

Also, greens from multiple farms are often bagged in the same factory, which increases the odds of cross-contamination.

4. Food poisoning may be bad for overall health

This could be due to certain bacterial toxins, which can cause the body to attack its own gut lining.[8]

Reasons not to freak out

1. Specific populations are most at risk

When confronted with a bacterial toxin, those who are physiologically susceptible will more often get sick. So cases that end up at the hospital often (but not always, by any means) include certain special populations.

These populations are those with compromised immune systems, elderly people, children, and pregnant women.[9][10] That’s a lot of categories, though. So if you have friends or family who might be susceptible, that’s a factor to take into consideration when choosing produce at the grocery store.

2. Not everyone reacts the same

A healthy and diverse gut microbiome might actually help crowd out bad bacteria.[11][12]

It’s impossible to predict whether or not your specific gut enviornment is resilient, and hence less likely to be severely impacted by these sorts of bacterial toxins. But (ironically) eating a diet rich in leafy greens and other produce may help fortify your gut against gut inflammation, which can enable bacterial toxins to enter the bloodstream more easily.[13][14]

A few simple tips can help you avoid unnecessary risk.

First, use your lettuce earlier than the use-by date, thus limiting the time in which bacteria can multiply.

Second, avoid sprouts. While not technically a leafy green, sprouts are probably the riskiest plant food, since they’re grown in warm and wet conditions. They’re basically germ incubators, and have been responsible for many outbreaks over the past two decades.

Third, don’t bank on organic greens being outbreak-proof. There’s not enough data yet to compare organic to conventional safety, but the biggest study to date found 18 organic food outbreaks in a 12 year period.[15] Some of these can be big. Like back in 1996, juice from the organic company Odwalla was behind a big outbreak that made 66 people sick and killed a 16 month old girl.[16]

Lastly, think about your own personal risk tolerance level. Some people are comfortable with the overall low odds of serious food poisoning complications. But others aren’t, especially since the risk is mostly avoidable if you choose un-bagged lettuce instead.

Bagged lettuce is quite susceptible to contamination, in both farms and factories. This has led to a large number of food poisoning outbreaks, even compared to usual suspects like seafood, meat, and eggs.

Infection with E. coli O157 from bagged lettuce often leads to hospitalization, and can even lead to death. Those with health conditions, or who are risk averse, may want to avoid bagged lettuce in favor of loose lettuce.

You are now following Is bagged lettuce worth the safety risk?. You will be notified when any significant update is made.

"Is bagged lettuce worth the safety risk?," Examine.com, published on 25 June 2018, last updated on 28 June 2018, https://examine.com/nutrition/lettuce-safety/