Is it OK to skip breakfast?

Growing up, you’ve probably heard, “Breakfast is the most important meal of the day.” From parents, diet gurus, doctors, and especially … breakfast cereal makers!

But does breakfast provide any real health benefit, compared to skipping it or drinking a quick coffee? We’re talking published evidence here, not anecdotes of “I feel better when I eat breakfast”.

Effect on eating later in the day

This discrepancy could be explained by differences in eating patterns. Some people will subconsciously compensate for all the calories they skipped; other people won’t feel cravings of the same magnitude. In a recent 4-week study, 49 women who didn’t habitually eat breakfast were randomized into two groups: breakfast or no breakfast.[6] On average:

So when it comes to skipping breakfast, going against one’s natural inclinations may not always be a great idea.

Skipping breakfast probably won’t cause you to overeat later in the day (unless you usually eat breakfast every single day, and find yourself ravenous after skipping breakfast). But it may not cause you to eat less, either. Individual responses do vary, so don’t try to force yourself into an eating pattern that doesn’t sit well with you or that you can’t sustain — it may end up backfiring.

You may have heard that eating breakfast will “jumpstart your metabolism” — the implication being that skipping breakfast will slow it down. The available evidence, however, tells a different story. Studies in both lean[4] and overweight[5] individuals have shown that extending your fast in the morning does not, in itself, lower your resting metabolic rate (RMR). This serves as further evidence that your daily caloric intake, not the frequency of your meals, affects your RMR.

Skipping breakfast won’t, in itself, lower your resting metabolic rate (RMR). If you eat below maintenance and lose weight, then yes, your RMR will decrease; but the method (skipping meals or eating smaller portions) makes little difference.

Working out fasted only affects peak performance. In other words, sprinting on an empty stomach is less than ideal, but jogging is fine. Note that if you do exercise fasted, consuming at least 20 g of protein within the two hours or so following your workout becomes even more important, to help build or at least preserve muscle mass.

Keep in mind that fasted training, independent of caloric intake, has not been proven to increase fat burning or weight loss. As we have seen, people who skip breakfast tend to compensate (but seldom overcompensate) by eating more during the day. They also tend to experience a minor decrease in physical activity,[7] so if you decide to skip breakfast for the purpose of losing weight, you should make a conscious effort to stay active.[8]

Exercising before your first meal is fine, unless peak performance is required. Just remember to get at least 20 g of protein within the two hours following your workout. To lose weight, skipping breakfast is rarely enough, but it may provide an advantage in conjunction with exercise.

Studies on breakfast skippers seldom examined any health markers other than weight. The few negative effects reported were very minor and may not amount to much in the real world. For example, a 4-week study found that skipping breakfast resulted in weight loss but also in higher cholesterol levels. However, total cholesterol, HDL, LDL, and triglycerides never increased by more than 0.4 mmol/L (7 mg/dl).[3]

That’s a very small effect, and the studies that reported larger ones[9] are rare. In fact, if skipping breakfast has a negative impact, it’s probably less on cholesterol levels than on glycemic control (as shown in the graphs below),[5] which might be a concern, but mostly for people with impaired glucose regulation. 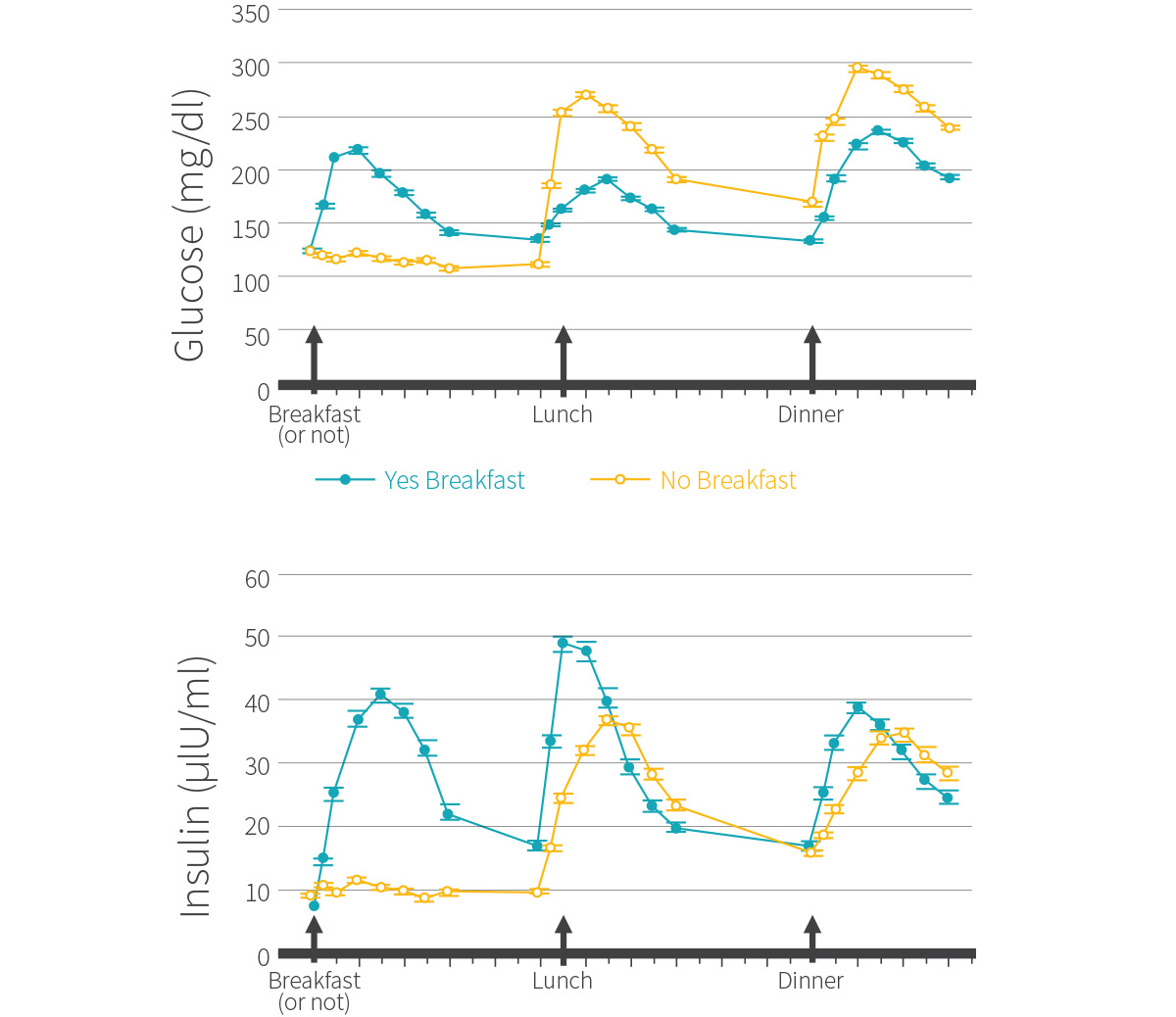 People with impaired glucose regulation may want to play it safe and avoid skipping breakfast. Most other adults have little to worry about.

So, is it OK to skip breakfast? The answer is … it depends. If you are consuming appropriate amounts of calories and macronutrients throughout the day, skipping breakfast won’t make much of a difference.

There are some caveats, though, as usual, so we’ve made a list of what could make you a good or bad candidate for breakfast skipping.

At the end of the day, whether or not you eat breakfast should be based on your preferences, personal goals, and health considerations. Feel free to experiment to see if you want to make skipping breakfast a habit.

You are now following Is it OK to skip breakfast?. You will be notified when any significant update is made.

"Is it OK to skip breakfast?," Examine.com, published on 21 February 2017, last updated on 4 February 2021, https://examine.com/nutrition/is-it-really-that-bad-to-skip-breakfast/