Which supplements can help against colds and the flu?

Vitamin C, vitamin D, zinc, and other supplements may provide an edge against colds and the flu, but they should only serve to complement your main defensive arsenal: good hygiene, proper hydration, healthy diet, restful sleep, stress control, and exercise.

Looking for information on coronavirus?

Colds and the flu are caused by viruses that travel from person to person. Although you fend off infections year round, you may be more vulnerable during the colder months: the ambient cold may weaken your immune system, according to preliminary human[1] and animal[2] evidence, and if it makes you spend more time inside with other people, it also gives you more opportunities to trade viruses and microbes. 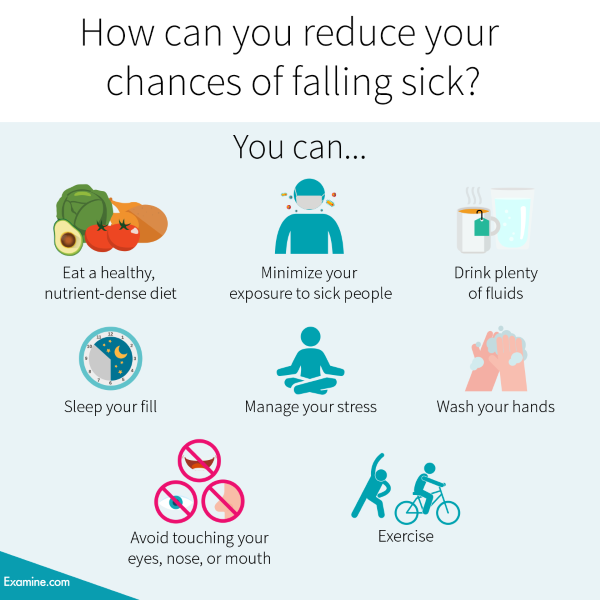 Unfortunately, even if you follow these best practices, you can still get unlucky and catch a cold or contract the flu. This is why, once winter hits, one of the most popular questions we get is: among the many supplements used to ward off an infection or lessen its symptoms, are there any that work?

The evidence regarding the benefits of vitamin C, vitamin D, and zinc is often mixed, but it suggests a positive effect.

Vitamin C is marketed as the go-to supplement for preventing and treating colds.

Mechanistically, it makes sense: vitamin C helps immune cells form and function, and it supports the physical barriers (such as the epithelial cells of your skin) that protect you from pathogens.[3] Moreover, at least 148 animal studies have found that vitamin C administration helps prevent infections caused by microorganisms.[4]

Those animal studies, however, don’t answer the question that most matters to us: can vitamin C supplementation help humans ward off colds? A 2013 Cochrane meta-analysis of human studies tried to answer this question,[5] and here are the takeaways:

A 2018 meta-analysis also supports the idea that vitamin C can shorten colds and lessen symptoms.[6] It included only 9 trials, however, all of which were among the 29 trials included in the 2013 Cochrane meta-analysis.

Vitamin C can reduce the duration of colds (and even help ward them off, if you’re an athlete), but only if you’ve been supplementing regularly. If you start when you’re sick, it’s probably too late.

Vitamin D receptors are found throughout the body, and vitamin D is involved in many cellular processes, including the regulation of immune cells during infections,[7][8] so it should come as no surprise that a deficiency can impair immunity.

Epidemiological studies show an association between low vitamin D levels and a higher risk of viral infections of the upper respiratory tract (URT). [9][10] According to a 2017 systematic review and meta-analysis of individual participant data from randomised controlled trials, taking vitamin D could help prevent asthma symptoms as well as URT infections.[11] More may not be better, however: a randomized trial published the same year found no statistically significant difference in incidence and duration of URT viral infections between children taking 400 IU/day and children taking 2,000 IU/day.[12]

Vitamin D serves many functions in the body, and a deficiency may impair immunity. A large systematic review suggests that supplementation may help prevent upper respiratory infections.

Zinc plays many roles in the body — including several in the immune system alone. If you easily catch colds, make sure your diet provides you with enough zinc. Athletes and other people who sweat a lot are at greater risk of zinc insufficiency, but taking too much zinc is aso a risk, so be careful.

Zinc lozenges can limit virus replication at the nasal epithelium and may reduce respiratory tract inflammation. Sucked throughout the day (75–95 milligrams of zinc per day, starting within 24 hours of symptom onset), they can reduce the duration of a cold by 2–4 days, though symptoms may persist for a few days thereafter.[13][14] Lozenges with zinc acetate may be more effective than lozenges with zinc gluconate (a more common form), but the trials are few, and a recent meta-analysis failed to find a significant difference.[15]

Zinc lozenges can cause nausea and dysgeusia (a change in taste perception), but those symptoms stop when supplementation stops.[13][14] In addition to nausea and dysgeusia, zinc nasal sprays can cause anosmia,[16] and this loss of smell perception may persist after supplementation has stopped. For that reason, and because the sprays have not been shown to be more effective than the lozenges, the sprays are not recommended.

The zinc dose shown to reduce the duration of colds (75–95 mg/day[13][14]) is above the safe upper limit (40 mg/day). You should suffer no harm if you take up to 100 mg/day for up to two weeks, but if you start suffering from nausea, vomiting, loss of appetite, stomach cramps, diarrhea, or headaches, all signs that you may be taking more zinc than your body can stand, just stop supplementing with zinc. Also, remember that zinc is present in foods and in many supplements, notably multivitamins: make sure that you don’t end up taking more zinc than you planned to.

Taking zinc lozenges throughout the day, starting from the very first symptoms of a cold, may reduce the duration of the illness, but supplementation should not exceed 100 mg of zinc per day for up to two weeks. Since zinc nasal sprays might cause a lingering loss of smell perception, they’re better avoided.

Many other supplements might help reduce the duration and severity of colds and the flu, but the evidence tends to be mixed, scarce, or low in quality. Among the most promising supplements are echinacea, elderberries, Pelargonium sidoides, and probiotics.

Taken daily, echinacea might reduce the risk and duration of upper respiratory infections,[17] yet trial effects are so small as to lack statistical or clinical significance.[18] Moreover, many of the trials were low in quality, or their quality was difficult to determine.

Echinacea can interact with medications, particularly immunosuppressive drugs. If you take any medication, you may want to consult a physician before trying this supplement.

Echinacea might reduce the risk and duration of upper respiratory infections, but many of the studies are of low quality and the effects are very small at best.

Elderberries (the fruits of the elderberry shrub) are known for their antioxidant properties, and in one randomized controlled trial, an elderberry extract reduced the duration and severity of colds more than placebo.[19] Also, a few human trials have shown elderberries to reduce symptoms of the flu,[20] but here the evidence is weakened by small sample sizes and, in some cases, low methodological quality.

Due to the small number of studies, both the efficacy and safety of elderberries are still in doubt.[21] Should you choose to prepare elderberry juice yourself, rather than to purchase a supplement, remember that the berries must be properly cooked, since they can otherwise cause nausea or, worse, cyanide toxicity. Only ever use the berries — the rest of the plant is poisonous and should not be consumed in any form.

Elderberries are a promising but understudied supplement: they may reduce the symptoms of colds and the flu, but the evidence is still preliminary. Beware: the plant is poisonous, and even the berries can be dangerous if not prepared properly.

Pelargonium sidoides seems to reduce the duration and severity of colds, but the evidence is still preliminary.

Various probiotics have been shown to interact with immune system cells,[24] but a 2015 report summarizing 17 Cochrane systematic reviews found no high-quality evidence that probiotics could prevent illnesses.[25]

Since then, a different systematic review and meta-analysis of 23 randomized controlled trials (RCTs) has found that probiotics appear to decrease the incidence of respiratory tract infections (RTIs) in children,[26] and two RCTs reported that specific probiotics might help prevent upper RTIs in athletes[27] and the elderly,[28] but the Cochrane reviews are still the most reliable evidence we have.

Truth is, systematic reviews of probiotics studies are difficult to perform, for two reasons:

With regards to the flu, a 2017 meta-analysis of 9 RCTs found that taking probiotics and/or prebiotics helped improve the efficacy of the flu vaccine in healthy adults when supplemented around the time of vaccination. However, many of the trial participants were healthy older adults, often above the age of 70, and we can’t be sure the benefits extend to a younger population.

Probiotics might help prevent respiratory tract infections, but the evidence is of low quality. Several studies suggest that probiotics may increase the efficacy of the flu vaccine in healthy, older adults.

Reaching for a supplement or two can seem like a quick, simple way to defend yourself against colds and the flu. Be it for prevention or treatment, however, even taking the best supplements won’t help as much as following these best practices:

So, as always, choose efficacious supplements to complement your healthy habits — not to make up for a lifestyle that predisposes you to getting sick.

If you’re looking for information on optimal dosages and combinations, then you may be interested in our Allergies & Immunity Supplement Guide.