The science behind munchies: cannabis and your appetite

Tetrahydrocannabinol (THC), a cannabinoid in cannabis, can bind the cannabinoid receptor type 1 (CB1) and thus promote overeating and weight gain. This effect, detrimental to most people, can prove beneficial under certain medical conditions, such as cancer and HIV-associated wasting syndrome.

Cannabis (aka marijuana) is a popular recreational drug that also has a variety of potential medicinal uses, from boosting appetite to reducing nausea and anxiety.[1] In cancer patients, cannabis may help ease the pain associated with chemotherapy while simultaneously increasing appetite (a serious side effect of chemotherapy being nausea).[1]

Aside from euphoria, this increase in appetite is probably cannabis best-known effect — you might refer to it as “the munchies”. Historical sources indicate that people as early as 300 BCE knew that cannabis stimulated appetite, especially for sweet and savory food.[2]

But what exactly is cannabis and how does it affect appetite? Let’s dig in.

The word “cannabis” refers to several plants in the Cannabis genus, including sativa, indica, and ruderalis. The cannabinoid compound tetrahydrocannabinol (THC), one of cannabis main active ingredients, is also the main reason why cannabis can cause “the munchies”: by partially binding to and thus activating cannabinoid receptor type 1 (CB1), THC increases your appetite.

In the different body tissues it occupies, CB1 acts in slightly different ways, several of which increase appetite.[2] CB1 can be found in the following areas: 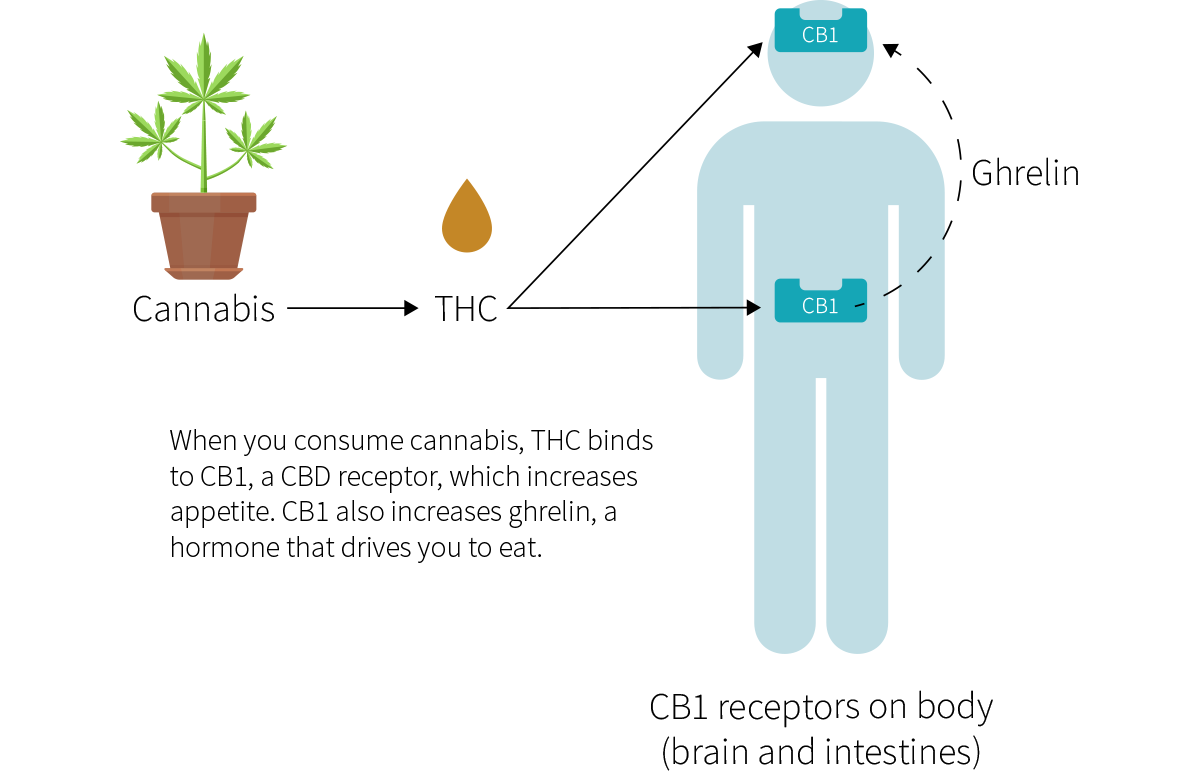 The method of THC consumption (inhalational, oral, sublingual, or rectal) can affect caloric intake and might influence food choice (preference for sweet, salty, sour, or bitter foods).[7] For example, suppositories led to greater daily caloric intake than did oral capsules. The differences in appetite stimulation are caused mostly by differences in potency and rate of absorption — two factors modulated by the consumption method, the co-consumption of other substances, and the tolerance of the subject.[1]

THC, one of cannabis main active ingredients, can interact with receptors that can, in turn, increase appetite. The method of consumption can affect how THC influences food choice and overall food intake, as can the amount and nature of the products consumed concurrently.

Does cannabis cause weight gain?

Few studies have looked at cannabis effect on the weight of healthy subjects, and the results are conflicting.

Cross-sectional observational studies are lower-quality studies that collect data at a single point in time. One such study associated cannabis with greater fat mass,[8] but the others associated it with a smaller waist,[9] lower BMI,[10][11] and lower prevalence of obesity.[12] Even a higher-quality prospective observational study found no association between extensive cannabis use and higher BMI.[13]

Keep in mind, however, that those studies all relied on self-reported use, and that such reports are always, to some extent, unreliable. Studies that used more reliable methods paint a different picture. Three clinical trials (whose participants were largely confined to a controlled hospital environment) saw increases in body weight.[14][15][16] However, all three trials were relatively short-term and had modest sample sizes.

Cannabis was associated with little or no weight gain in observational studies, but with weight gain in a few higher-quality studies (clinical trials).

While many people wish they could lose weight, people with HIV-associated wasting syndrome, cancer-associated cachexia, or anorexia nervosa, notably, are often underweight. Two synthetic THC-based drugs have been developed to address the issue: nabilone (Cesamet®) and dronabinol (Marinol®, Syndros®).

THC, natural or synthetic, may increase body weight in people with HIV-associated wasting syndrome. In people with anorexia nervosa or cancer-associated cachexia, it might have the same effect, but the evidence is weaker.

CB1: the key to weight loss?

Researchers have used endocannabinoid antagonists (compounds that block CB1) to treat obesity caused by compulsive binging or irresistible cravings for sweets and snacks. Rats given the anti-obesity drug rimonabant, an endocannabinoid antagonist, lost weight and experienced a reduction in their blood levels of insulin.[27] Human trials of the same drug showed weight losses of 2.6–6.3 kg (5.7–13.7 lb) above placebo.[28] Most of these trials lasted over a year, including one that saw a plateau at 9 months.[29]

Yet in spite of these successes, rimonabant failed to earn approval from the U.S. Food and Drug Administration (FDA) and was withdrawn from the European market,[30] due to side effects that include nausea, dizziness, severe depression, and suicidal thoughts.[31][32]

Since CB1s are found throughout the body, it is difficult to pinpoint the causes and mechanisms of these side effects. Still, in the future, safer endocannabinoid antagonists may play a role in treating obesity by blocking CB1 in order to increase adiponectin production and reduce appetite.

Drugs that block CB1, such as rimonabant, lead to significant weight loss, but the side effects are severe. Still, future studies on endocannabinoid antagonists (i.e., CB1 blockers) might lead to breakthroughs in the fight against obesity.

By activating CB1, a receptor present in various body tissues, the cannabinoid THC in cannabis can increase appetite.

THC might be useful for increasing body weight in some clinical populations (such as people with HIV wasting, cancer wasting, or anorexia nervosa).

Drugs that block CB1 promote weight loss but can also cause many harmful side effects.

Should you wish to learn more about cannabis, please visit our dedicated supplement page.