Eczema (atopic dermatitis) is a common, painful skin condition where the skin is inflammed, itchy, and the skin barrier is disrupted. Treatment generally involves addressing each of these aspects.

Atopic dermatitis, also called eczema, is a common condition where itchy, dry lesions form on the skin. Scratching these lesions can exacerbate them, leading to a vicious cycle. “Atopic” refers to a heightened sensitivity toward allergens, leading to frequent, excessive immune reactions. Other atopic diseases include allergic rhinitis and asthma. Eczema is a chronic, inflammatory skin disease, and this consistent inflammation is a big part of what drives the condition’s progression and produces many of its symptoms. It is most common during childhood, with a prevalence of up to 25% of children affected, but can persist into adulthood; over a lifetime 7–10% of people will be living with atopic dermatitis.[1]

Red, inflamed skin lesions that can occur on many parts of the body. These lesions are, dry and often itchy, swollen, oozing, crusting, and lichenified (thick and leathery). Scratching is common, which leads to a vicious cycle of irritation leading to scratching leading to further irritation. Psychological symptoms such as depression, anxiety, and insomnia are also common.

Diagnosis is generally based on signs/symptoms and medical history. Eczema is chronic, so it can take a while to be sure that the lesions are due to eczema rather than a more acute phenomenon like an infection, rare allergy, or exposure to toxicants. A history or family history of asthma, hay fever, and dry skin also makes eczema more likely. To determine the severity of atopic dermatitis and track treatment progress, researchers and doctors objectively measure several facets of the disease. Primarily, they note the amount and areas of the body affected and the severity of the lesions and symptoms. The Severity Scoring of Atopic Dermatitis Index (SCORAD) and Eczema Area and Severity Index (EASI) are two methods that stand out for their usefulness and reliability.[2] This is how they’re scored: 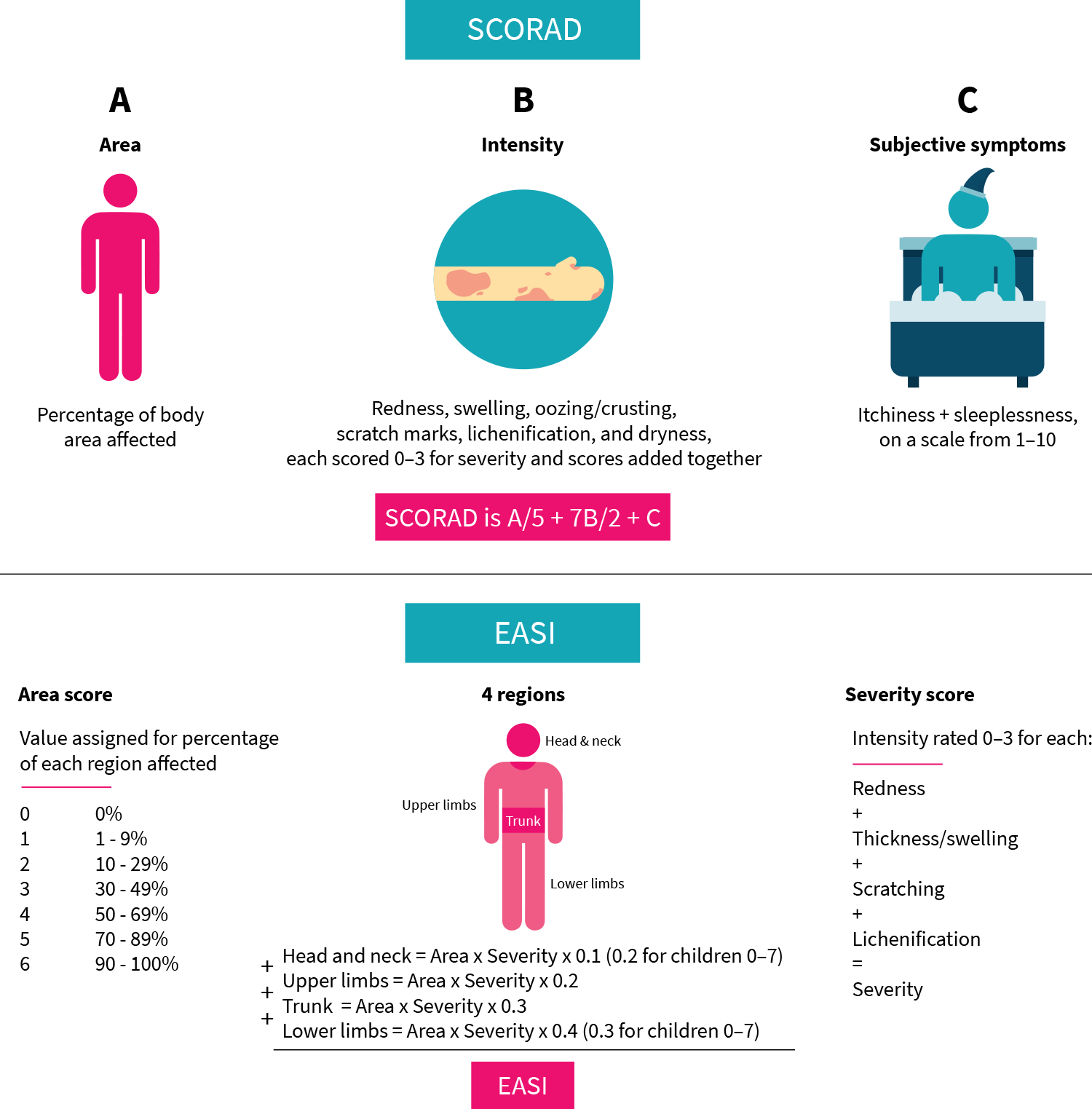 Psychological symptoms, such as pain, loss of sleep, depression, and anxiety, can also be evaluated and are an important part of the overall picture.

What are some of the main medical treatments for eczema?

Have any supplements been studied for eczema?

So far, vitamin D is the only essential nutrient that has convincing evidence for improving atopic dermatitis. In a meta-analysis, 4 trials found evidence for a meaningfully beneficial effect.[9] Two used 1,600 IU; one used 1,000 IU; and one used sun exposure in a subtropical climate. Two were in children, and two were in older populations. More high-quality research is needed to confirm these findings and determine the best scenarios for using vitamin D for atopic dermatitis.

Other nutrients have been lightly researched, but they’re not worth mentioning at present.

One meta-analysis of randomized trials in children found evidence of a beneficial effect for participants in the ages 1–18 category, but the effect on participants younger than 1 wasn’t statistically significant or as large.[10] In particular, the most evidence for a positive outcome was found for mixtures of probiotics. However, the studies in general had a notable risk for bias, so more research will be needed to both confirm efficacy and clarify which combinations of probiotics are best. The meta-analysis only included studies where a dermatologist had evaluated the participants with the SCORAD method, which lends itself to a higher level of objective measurements but limited the number of studies. Another meta-analysis that included any trial that used probiotics to treat pediatric eczema found a general benefit, but again, multiple studies on particular strains or mixtures are needed before we can know how to optimally use probiotics. Finally, a meta-analysis looked at synbiotic (a combination of pre- and probiotics) supplements, and out of 6, a statistically significant benefit was found, but it’s unclear if synbiotics are superior to probiotics or which synbiotics are best.[11]

Pharmaceutical and supplement therapies for atopic dermatitis are largely centered around substances that modify immune response to reduce the effects of persistent inflammation.

The use of partially hydrolyzed whey protein infant formula may reduce the risk of eczema later in life.[12] In addition, sufficient levels of vitamin D, zinc, and selenium are associated with a lower risk of eczema, though besides vitamin D, it's not clear if they are causally linked.[13]

People with atopic dermatitis can select clothes made from materials that cause less itching. Fabrics with scratchier fibers and a wider space between fibers produce more itching.[14] Silver textiles may also reduce S. aureus, though more research is needed.[15]

Light therapy for atopic dermatitis involves exposing the skin to specific wavelengths of ultraviolet (UV) radiation, often in combination with psoralen (a sensitizing agent), to adjust the immune system in the skin. A systematic review found some evidence for the use of narrow-band UV-B and UV-A1 for reducing severity, but evidence for combining it with psoralen was insufficient.[17]

A family history of atopic diseases — and atopic dermatitis in particular — is the strongest predictor, with twin studies suggesting a very high genetic component.[18] Most of the genetic causes aren’t well understood, but one of the most likely contributors are gene variants of the filaggrin gene (FLG), which codes for filaggrin, an important structural protein of the epidermis that maintains proper skin barrier function.[19][20][21] That said, most people with atopic dermatitis don’t have any FLG mutations, and a majority of people with FLG mutations won’t develop atopic dermatitis, so it’s only one part of the picture. Another genetic cause is gene variants of the serine peptidase inhibitor kazal type 5 (SPINK5) gene, which codes for a protein that helps regulate desquamation (peeling/shedding of the outermost layer of skin, which is a normal part of cell turnover but can go awry), preventing excessive breakdown of the stratum corneum (the outermost layer of skin). It also has implications for the skin barrier and skin dryness.[22]

Besides FLG and SPINK5, some other genes related to atopic dermatitis are also related to immune function and inflammation, namely the cytokines IL-4 and IL-10.[23][24] Gene variants in TLR2 and TLR4, which are involved in the activation of inflammatory signaling, are also associated with a higher risk.[25]

Atopic dermatitis is a multifaceted disease with many processes that work together; variations in genes related to skin cell turnover, skin barrier maintenance, and inflammation are all likely to contribute.

Lower microbial diversity and low populations of beneficial species in the gut are associated with the risk for atopic dermatitis. When it comes to the skin microbiome, an imbalance is likely more of a consequence of atopic dermatitis than an initial cause, though a partial role can’t be ruled out in some cases.

Both active smoking and secondhand smoke exposure increase the risk of atopic dermatitis.[29] Smoking has the potential to disrupt the healthy functioning of the immune system, both aggravating pathogenic (potentially disease-causing) immune responses and impairing protective ones.[30] Prenatal exposure to smoking wasn’t associated with atopic dermatitis risk in general but has been in studies conducted in Asia.[31][29] The reason for this discrepancy is unknown.

One meta-analysis found an association between maternal alcohol consumption and atopic dermatitis in offspring.[32] Interestingly, it didn’t find an association between alcohol consumption and the skin condition for adults. It should be noted that these observations are based on a relatively small amount of research. It is possible that alcohol exposure in utero can lead to an immune system imbalance — called Th2 dominance — that is more associated with atopic dermatitis, but there may be other reasons.

There is some evidence that being born in winter or fall is associated with a greater prevalence of atopic dermatitis.[33] One probable reason for this is lower humidity and an increased risk of skin dryness and disrupted skin barrier function during the first months of life. Higher immune activity during winter has also been observed, which could increase the likelihood of excessive skin inflammation. Vitamin D levels are a plausible cause, but the evidence for this scenario specifically isn’t compelling.[34][35]

A meta-analysis found that a mother taking probiotic mixtures during pregnancy or breastfeeding can reduce the risk of atopic dermatitis in her children.[36] This provides evidence that the maternal gut microbiome during pregnancy is relevant to offspring, though evidence outside of the context of probiotic supplementation is lacking. Another meta-analysis, investigating the effects of Lactobacillus and Bifidobacterium bacteria mixtures in children, also found convincing evidence for a reduction in risk.[37] However, it should be noted that almost all studies included supplementation during pregnancy; only two studies didn’t. Yet another study looked at any probiotic supplementation and found notable benefits when women took probiotics during pregnancy. A total of 5 studies looked only at supplementation for infants; the results were positive overall, but we can’t be sure of them, and more research is needed.[38] The evidence for giving infants and children probiotics for prevention is promising but very preliminary.

Early-life antibiotic use is associated with a higher risk of atopic dermatitis, though this could be as a result of an increased risk of infections due to other factors that further increase the risk of the skin condition.[39]

Being overweight or gaining a large amount of weight during pregnancy is associated with a higher risk of atopic dermatitis in children, while low weight gain during pregnancy is associated with a lower risk.[40] These risks are small, and the extent to which the weight gain itself — rather than confounding factors, such as stress — plays a role is unclear.

Preliminary evidence suggests that maternal stress, anxiety, and adverse life events that could be causes of stress and anxiety are associated with a greater risk of atopic dermatitis in their children.[41]

There is also some evidence that prenatal phthalate exposure increases the risk. [42]

The gut microbiome seems to be critical early in life to the risk for atopic dermatitis. Probiotic use during pregnancy and breastfeeding are likely protective, while antibiotic use is associated with a higher risk. Adverse prenatal conditions, such as excessive weight gain, stress and anxiety, or exposure to alcohol or phthalates, are also associated with an increased risk.

Other factors may include:

Some protective factors may include:

A few factors that some believe contribute to risk or severity but don’t appear to have an effect include:

This page features 50 references. All factual claims are followed by specifically-applicable references. Click here to see the full set of research information and references for Eczema.