Stinging Nettle is quite a nasty plant to touch, but oral ingestion of pills without spikes results in a moderately potent anti-inflammatory that can reduce the sniffles. Does not boost testosterone despite being claims to, although it can help Benign Prostatic Hyperplasia and urine abnormalities.

This page features 43 references. All factual claims are followed by specifically-applicable references. Click here to see the full set of references for this page.

Stinging Nettle, also known as Urtica dioica from the family Urticaceae, is a widespread herbal used frequently for 'male health'; usually referring to the prostate and urinary tract. Initially indigenous to Africa and some parts of Asia, it is now located in all temperate zones across continents.[5] It has sometimes been used to promote hair growth and to promote lactation and prevent uterine bleeding after childbirth.

As a herbal supplement, Stinging Nettle contains a variety of nutrients. These include:

The active ingredient tends to be seen as beta-sitosterol; which is the daucosterol molecule after daucosterol is separated from the glucose moiety. There is some confusion as to whether or not it actually is the active molecule, as overall amounts of beta-sitosterol tend to be less than 0.01% if not otherwise concentrated, and isolated beta-sitosterol seems to best influence prostate health (most common usage of Stinging Nettle) at dosages above 60mg.[18] 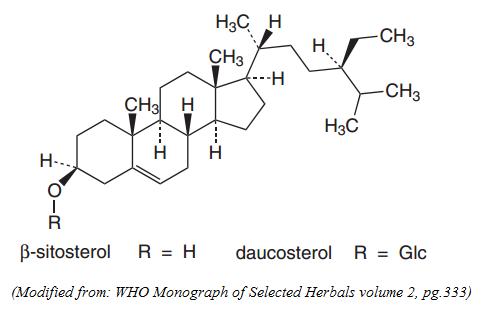 In a study on 558 patients of Benign Prostate Hyperplasia, testosterone levels were measured and no statistically significant differences were found between the experimental and control group at 120mg taken thrice daily.[19]

Also, lignans from Stinging Nettle may interfere with Sex-Hormone Binding Globulin (SHBG) and prevent it from associated with androgens and estrogens. A 10% hydroalcoholic extract can decrease binding of DHT to SHBG by up to 67%, and slightly lesser effects are seen with aqueous extracts.[20][21] The inhibition appears to be dose dependent in vitro.[22] Isolated lignans retain this potency, inhibiting and even displacing DHT from SHGB by 60%(Secoisolariciresinol), 73%(enterofuran) and 95%((-)-3,4-divanillyltetrahydrofuran).[5]

A large clinical trial of 558 patients showed that Stinging Nettle is able to reduce urinary complications (reduced flow rate) associated with benign prostate hyperplasia at 120mg taken three times daily.[19] Stinging Nettle was also able to reduce the size of the prostate yet had no effect (beneficial or negative) on circulating testosterone levels. Results similar to these have been found in other interventions, although confounded with other nutrients such as sabal fruit[3][1][2] or Serenoa Repens.[4] In studies that continue usage beyond the trial period, benefits are seen over the long-term without an increase in side-effects.[19][23] At least in rats, this alleviation of decreased urinary rate is also seen with the isolated main ingredient, beta-sitosterol.[6]

These effects may be due to Stinging Nettle extract having the ability to act as a 5a-reductase inhibitor, preventing the conversion of testosterone to Dihydrotestosterone (DHT), with an IC50 ranging from 0.12-0.32mg in vitro depending on the extraction method (with petroleum and ethanolic extracts having more potency); about ten-fold less active than finasteride.[6] By inhibiting prostatic conversion of testosterone to DHT, prostate size can be reduced.[24]

Isolated beta-sitosterol appears to be similarily potent as Stinging Nettle when increased to around 60mg, and may be an active ingredient on the prostate.[6] The dose of beta-sitosterol found in Stinging Nettle, however, is lower than the preceding dose. Related compounds campesterol, sigmasterol and stimast-4-en-3-one may also be active ingredients, through inhibiting the prostatic sodium/potassium pump.[25]

Stinging Nettle appears to have the ability to act as a Cyclooxygenase inhibitor (1 and 2), and inhibiting Hematopoietic Prostaglandin D2 synthase; three anti-inflammatory actions.[26] The IC50 value for COX inhibition is 160+/-47ug/mL for COX-1 and 275+/-9ug/mL for COX-2.[26]

Several human trials have looked at topical application of Stinging Nettle for its ability to reduce joint pain. One exploratory study (not an intervention) suggested that it was helpful to apply the leaves of Urtica Dioica topically[27] yet two double-blind interventions into the matter had conflicting results; leaves of Urtica Dioica applied to the thumb were found to be significantly better than placebo[28] whereas its effects on knee pain were no better than placebo.[29] Better results relative to the leaves have been found in making a topical cream with Stinging Nettle Root, but only one study has looked at this.[30]

One study looking at osteoarthritis investigated oral ingestion of Stinging Nettle and found benefit, but was confounded with coingestion of fish oil.[31]

Mixed effects have been seen in regards to biomarkers of inflammation. One study noted a decrease in IL-6 with oral administration in type II diabetics[32] while another noted an increase in IL-6 when baseline levels were low to normal.[33] Additionally, the former study noted no significant effects on TNF-a[32] while the latter noted an impaired secretion of TNF-a in response to LPS administration.[33] It is plausible Stinging Nettle may be immunomodulatory, but currently this claim is unsubstantiated.

Possesses anti-inflammatory potential, but the studies currently done in humans are lacklustre and vary too widely in their methods of application to be compared. More studies need to be done with some dosage consistency.

Stinging Nettle seems to have some societal usages as a 'natural' alternative for clearing the sinuses from allergies.[34] This usage of stinging nettle has both been said to be free from side-effects[35] as well as associated with them[36] depending on who you ask.

One double-blind study investigating the effects of Stinging Nettle on Allergic Rhinitus found that 600mg was able to reduce the side-effects associated with Allergic Rhinitus, and that 48% of persons found it better than other over-the-counter medications (unlisted).[37]

These effects appear to be mediated through anti-inflammatory pathways. In particular, Stinging Nettle has been shown to be a histamine antagonist and inhibit mast cell tryptase; two mechanisms of action seen as anti-allergenic.[26] The IC50 values were 251+/-13ug/mL (antagonism) and 193+/-71ug/mL (negative agonism) for the histamine receptor and 172+/-28ug/mL for mast cell inhibition.[26] Other anti-inflammatory effects of Stinging Nettle, such as COX1 and COX2 inhibition, may also contribute to anti-sinusitis effects.[26]

The LD50 of stinging nettle of an aqueus extract, when injected, is 1.72g/kg bodyweight; it is heightened to 1.93g/kg when using a root extract.[5]

Oral administration up to 1.31g/kg in rats has been well tolerated.[5]

Urtica Dioica leaves are dubbed 'stinging nettle' because, well, they sting when they touch the skin. The leaves seem to mechanically irritate the skin[38] and the body responds by releasing factors that cause itching, dermatitis (rash) and urticaria (hives) moments later.[39] The leaves also contain various chemical irritants, such as 5-hydroxytryptamine, acetylcholine, histamine, formic acid, and leukotrienes.[40][41]

For the most part, transient contact with stinging nettle is harmless, although annoying.

Despite this irritation, it is folk remedy to press leaves of Urtica Dioica into sore joints to alleviate pain. Three trials have looked at this method of administration with mixed results.[27][29][28] Subjects tend to report the application as being irritating, but not to a degree that acts as a deterrent.

This page features 43 references. All factual claims are followed by specifically-applicable references. Click here to see the full set of research information and references for Stinging Nettle.