Spilanthes Acmella is a traditional medicine for toothache, fever, and as an aphrodisiac; one study in rats suggests that it may increase testosterone, but it is an understudied herb.

Spilanthes acmella is the more common name for the plant Acmella oleracea (and also has another name of Spilanthes oleracea; used less frequently). It belongs to the plant family of Asteraceae, and has been used in Ayurveda.[1]

Common terms used to refer to the plant include Jambu, toothache plant, or Paracress. It derives the name of 'toothache' plant from the compound 'spilanthol' which is sometimes used to reduce the pain associated with toothaches and can induce saliva secretions,[2] alongside the other compound Acmellonate.[3] Other traditional uses of this herb according to Indian medicine are the treatment of rheumatism and inflammation, a sialagogue for stammering, tongue paralysis, stomatitis, toothache and a treatment for fever, sore throat, and gum infections.[1] Beyond these health effects, it has been used as an aphrodisiac and sexual tonic.[1]

Spilanthes Acmella does appear to have anti-malarial and antilarvicidal properties,[4][5] once demonstrated as a tea (hot water extract).[6]

As a herbal compound, Spilanthes Acmella contains a variety of molecules including the N-Akylamide class:

And other various compounds being:

The bioactives appear to be N-akylamide compounds, which have been implicated in enhancing sexuality via Maca (Macamide[9]) and Anacyclus Pyrethrum (pellitorine[10]); these are different from most aphrodisiac compounds, which work via terpenoids or saponins. The N-akylamide class tends to be extracted in ethyl acetate:butanolic extracts due to their relatively high polarity.[7] Spilanthol can be concentrated in the ethanolic extract, which has once been found to contain 9.04% of total N-Akylamides yet 88.84% Spilanthol.[11] 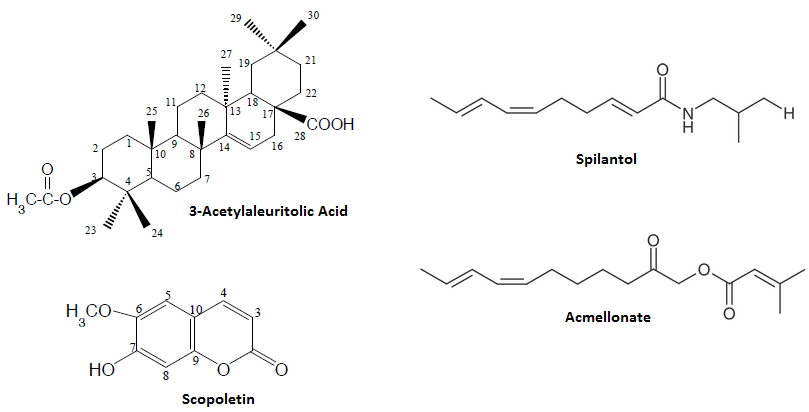 The bioactives in Spilanthes are still being weeded out, but they appear to belong to the N-Akylamide class of molecules and Spinathol appears to be the bioactive currently seen as the 'primary' bioactive

Spilanthes Acmella may inhibit the CYP2E1 enzyme, as 0.067mM of Spilanthol has been shown to inhibit 55% and 75% of CYP2E1 activity in human liver microsomes and expressed 2E1 enzymes, respectively.[12]

Since CYP2E1 is involved in processing ethanol after ingestion[13], care should be taken when consuming alcohol while using this supplement. Spilanthes Acmella could theoretically increase ethanol sensitivity by slowing the rate of clearance from the body.

Spilanthes has been investigated for its pain relieving effects since it was observed that consuming a salad made from the leaves numbed the tongue.[14] The bioactive Spilanthol is well absorbed through the skin,[15] When applied intracutaneously, 10% and 20% Spilanthes Acmella produced 70.36% and 87.02% anesthesia within 5 minutes and when compared to 2% xylocaine as active control (which produced 97.22% anesthesia within 2 minutes) Spilanthes underperformed.[14]

Other possible bioactives include Acmellonate, which has demonstrated in isolation a weak numbing effect on the tongue.[3]

Possible pain killing effects when applied topically, apparently numbs the tongue when the herb itself is eaten as a salad

Spilanthes Acmella has once been demonstrated to inhibit Pancreatic Lipase activity when an ethanolic extract of the flowers were used, and Pancreatic Lipase was inhibited 40% in vitro at 2mg/mL Spilanthes.[16] It was compared to and significantly outperformed by Aframomum meleguetta (90% inhibition), also known as Alligator Pepper, where even 0.75mg/mL inhibited more pancreatic lipase than Spilanthes.[16]

Spilanthes Acmella appears to have endothelium-dependent vasorelaxant properties, with an ethyl acetate fraction possessing an EC50 value of 76.1ng/mL.[17] This extract has been shown previously to possess a Scopoletin content, which is both an anti-oxidant and vasorelaxant;[18] this may be the bioactive in Spilanthes underlying vasorelaxation.

Hexane and Chloroform extracts of Spilanthes Acmella appear to suppress Nitric Oxide production in stimulated macrophages at 80mcg/mL by 72% and 85% respectively, and isolated Spilanthol appears to dose-dependently prevent macrophage activation (assessed by nitric oxide and morphology after LPS stimulation) with 90uM reducing Nitric Oxide production to 60% and 360uM nearing 20% production.[19] These inhibitory properties were accompanied by less iNOS and COX2 mRNA and protein content, less cytokine production from macrophages, and less NF-kB activation in the nucleus (90uM and 180uM reducing activation to 57% and 38% of control); these were thought to all be secondary to general anti-oxidant properties.[19]

Spilanthes Acmella confers aphrodisiac effects in male rats dose-dependently improving mount latency and frequency, intromission latency and frequency, and improvements in ejaculation frequency and decreasing the post-ejaculatory interval (remission).[1] Although exact quantification of these improvements was not given, estimates derived from graphs suggest that after 28 days of 150mg/kg, the improvements were reductions in mount latency (51%), intromission latency (47%), post-ejaculatory latency (48%) and increases in mount frequency (110%), intromission frequency (amount of entries into female within 30 minutes of observation; 350% increase, from 2 to 9), ejaculation frequency (amount of ejaculations in 30 minutes; 66% improvement) . These benefits were more significant 28 days after supplementation relative to 14 days, suggesting a build-up effect.[1]

In regards to pro-erectile properties, one study which established a 293% increase in the penile erection index (PEI) to Viagra (5mg/kg) noted a 202% increase with Spilanthes Acmella[1] and appears to still exist up to 2 weeks after supplement cessation; suggesting long elimination rates of the active compounds, as when measured 14 days after cessation the Viagra group normalized and the highest dose of 150mg/kg Spilanthes remained 177% above baseline.[1] These effects were dose-dependent in nature, built up over 28 days (more potency on day 28 of supplementation relative to day 14), and a subsequent in vitro test in DS-1 cells noted that the increase in Nitric Oxide was 52% as potent as Viagra at the same dose.[1]

Appears to beneficially influence all parameters of male sexuality to a degree more than Viagra except for pro-erectile properties, of which Viagra outperformed. Preliminary evidence suggests that it is fairly potent

At least one study suggesting increases in testosterone after supplementation

Spilanthes Acmella has been touted to have diuretic properties in Sri Lankan medicine,[20] and when the flowers were tested at oral doses of 500, 1000, or 1500mg/kg in rats with 13mg/kg furosemide as an active control the highest dose of Spilanthes Acmella induced urine output within 1 hour after ingestion with similar potency to furosemide (523% relative to 405% with Furosemide) yet continued to have potency over 5 hours, eventually outperforming Furosemide in overall urine output.[20] This diuretic effect by the highest dose was accompanied by an increase in urinary sodium (51%) and potassium (213%) although the ratio did not appear significantly altered, and a decrease in urinary pH existed with no changes in proteinurea, glucoseurea, or urine color.[20]

Appears to be a very potent diuretic when the flowers are consumed at high doses, stronger than furosemide in one study

In studies on rats using dosages of up to 150mg/kg bodyweight, no toxic effects or hinderances to functionality are noted with an ethanolic extract over 28 days of supplementation.[1] 10-fold this dose (1500mg/kg) ethanolic extract of the flowering buds with similar bioactives has failed to exert toxicity acutely when given to rats in a single dose.[20]

Care should be taken when consuming Spilanthes acmella with alchohol, since it may increase ethanol sensivity via inhibition of the enzyme CYP2E1.[13]

This page features 20 references. All factual claims are followed by specifically-applicable references. Click here to see the full set of research information and references for Spilanthes acmella.