Senna Alexandria is a plant containing Sennosides, which are laxatives. Nothing more special about Senna root or Sennosides, they just are very effective at clearing your bowels and are at a level of potency where they are sometimes given before a colonoscopy.

This page features 41 references. All factual claims are followed by specifically-applicable references. Click here to see the full set of references for this page.

It is sometimes traditionally referred to as . It has traditionally been used as a laxative which is clinically supported, and has further been claimed to be an expectorant, a wound dressing, an antidysenteric, and a carminative agent; and for the treatment of gonorrhoea, skin diseases, dyspepsia, fever, and haemorrhoids. None of these latter claims are scientifically validated yet.[1]

The active ingredients can also be derived from the fruits of Cassia angustifolia or acutifolia (considered synonymous),[2] the fruits of which are sometimes referred to as Fructus Sennae.[1] Rhubarb also has a small sennoside content,[3] at around 0.5%.[3][4]

As a herbal supplement, Senna contains a variety of molecules and bioactives such as:

The sennosides are seen as the active ingredients, and are pictured below. They are glycosides of a rhein anthrone molecule, which then bind to each other in pairs. For the drug to be bioactive, the glycoside must first be broken off (by intestinal bacteria metabolism) and then the dirheinanthrone molecule (also known as Sennidin) passively separates. 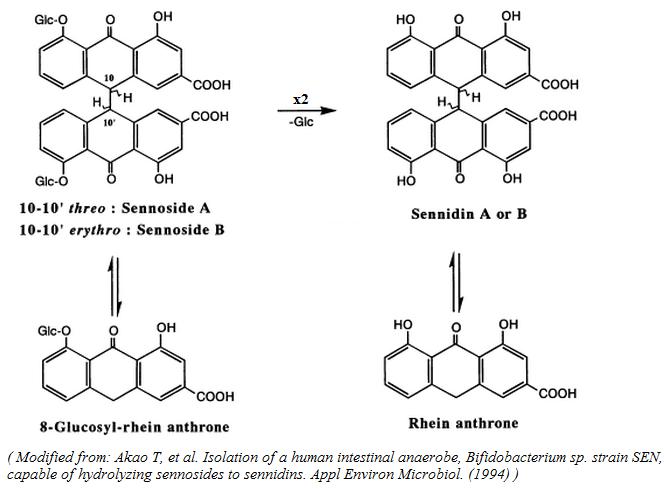 Sennosides are insoluble in water, and barely soluble in methanol; however, an aqueous mixture of 30% water and 70% methanol can dissolve Sennosides. Sennosides are also soluble in sodium bicarbonate as it neutralizes their acidity.[10][4]

It is possible that Sennosides can be degraded into rhein anthrone molecules during shelf-life,[11] and it is recommended to avoid all moisture and heat in storage of Senna plants, extract, or pills/capsules.[1]

The anthranoid class of molecules are resistant to acid digestion in the stomach as well as enzymatic digestion by the small intestine due to possessing a beta-glycosidic bond, typical of dietary fibers.[12] Due to an inability to be metabolized and absorbed, they are then sent to the large intestines (colon) where colonic bacteria (of the Bifidobacterium class)[13][14] can hydrolyze the bond and release free rhein anthrone, which is bioactive in the colon.[12][15] In this sense, the rhein anthrone is seen as the active component whereas the Sennosides are seen as pro-drugs.[12]

Although Senna should not reach systemic circulation by the above mechanisms, a small amount of rhein has been reported in the breast milk of mothers after oral Senna usage (although insufficient to cause laxative effects in the infant fed).[1]

There are two mechanisms by which Senna products (and the anthranoid class of laxatives) exerts pro-motility effects. Altering intestinal contractions to favor peristalsis while inhibiting location contractions (in and of itself a pro-motility effect) and inducing secretion of electrolytes into the colon and limiting liquid absorption to increase colonic water content and exert stool softening effects.[16][17]

In studies on rats, senna appears to exert little toxicity.[18][19] The LD50 has been implicated at around 5,000mg/kg bodyweight in both rats and mice, and is possibly secondary to electrolytic imbalance from the colon.[20][21]

In regards to genotoxicity and mutagenicity, they appear to exert weak effects.[22][23][24]

When looking at the causative molecules, it appears that the main laxative components Sennoside A and B exert minimal toxicity while lesser molecules (such as rhein-8-glucoside) exert more toxicity relative to the Sennosides.[18][21]

The emodin molecules, Aloe-Emodin and Emodin, have been shown in one study to have genotoxic effects[25] while exerting no genotoxicity in another.[26]

A rat study using 1% dietary anthranoid (hidroxyanthraquinones) intake for 480 days, a large intake coupled with prolonged dietary period, induction of bowel tumors was noted.[27] Lower doses (50-300mg/kg bodyweight whole extract) over 2 years does not cause carcinogenic effects, but may cause some reversible abnormalities such as benign colonic hyperplasia in rats[28] which is not seen in clinically relevant doses of 5-25mg/kg bodyweight over 2 years in rats.[29]

In humans, an association was found in the past between laxatives of this class (the anthranoid laxatives)[30] but is contested.[31] No causation has been established between chronic use of Senna products and colorectal cancer risk in humans.

The above toxicological reports suggest that Senna usage is fine if not abused (in dose) and kept relatively short, with normal doses over a prolonged period having the ability to cause some reversible abnormalities. Large doses of senna for chronic periods of time may be a risk factor for colon cancer and has biological plausibility, but has not been fully demonstrated yet

This page features 41 references. All factual claims are followed by specifically-applicable references. Click here to see the full set of research information and references for Senna alexandrina.