Punicalagins are really big molecules found in pomegranate juice that are somehow absorbed; they are potent anti-oxidants, and alongside punicic acid confer many of the benefits associated with pomegranates, of which many studies conducted with are here.

This page features 47 references. All factual claims are followed by specifically-applicable references. Click here to see the full set of references for this page.

Punicalagins are the main ellagitannins in Pomegranate juice, comprising most of the polyphenol content (alongside Anthocyanins like Delphinidin). It is found in the rind of the pomegranate, and is the molecule that imparts the yellowish color; due to its water-solubility, it is extracted in juice.[1] Commercial juices seem to have higher in vitro anti-oxidant capacity than do hand-pressed pomegranate juices[1] which may be due to commercial juices having less time for ellagitannins such as punicalagins to hydrolyze into ellagic acid, and punicalagins being much more potent anti-oxidants than ellagic acid.[2][3] Beyond pomegranates, punicalagins are found in: 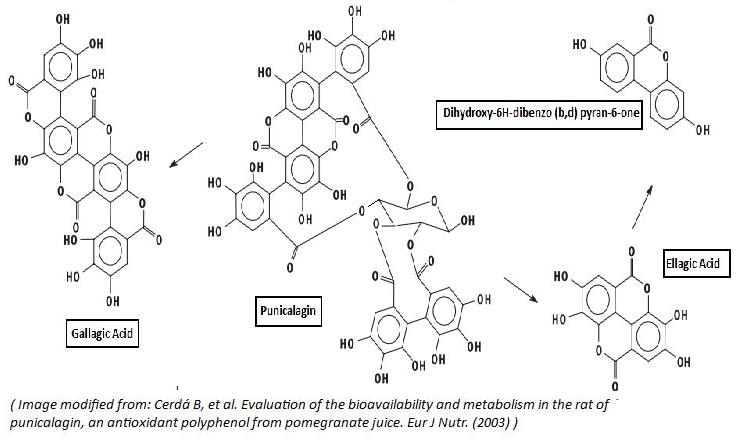 The compound in the top right, dihydroxy-6H-dibenzo{b,d}pyran-6-one, is also called Urolithin.[6]

While in the intestines, pomegranate juice can inhibit P450 sulfation with a 50% inhibition IC50 value of 45um for punicalagins; no interaction with SULT gene transcription or glucuronidation was noted.[7]

About 3-6% of an oral dose, in rats, is found in urine or faeces after ingestion[5] suggesting a large component is metabolized. After 0.6-1.2g ingestion, circulating levels of around 30mcg/mL were noted.

In humans, the sum of metabolites (punicalagins and derivatives) shows wide variability; one study noted it ranging from 0.7 to 52.7%.[8] Doses as low as 330.4mg punicalagins (800mg Pomegranate extract) are not detected in serum[3] although urolithins A/B and ellagic acid variants were detected either in free form or as glucuronides (current study had a 21.6mg oral dose of ellagic acid as well). Again, large variability is seen in the quantities of these metabolites, which may be due to varying levels of colonic fermentation.[9] Despite this variation in metabolites, this study noted the average Cmax of 33.8±12.7 ng/mL at 1 hour before dropping to 12 and 6ug/mL at 2 and 4 hours, respectively. This Cmax is similar to a previous study noting 31.9ng/mL after 1 hour with 318mg punicalagins and 25mg ellagic acid.[10]

In the colon, punicalagins appears to be metabolied into 6H-dibenzo{b,d}pyran-6-one derivatives, which are excreted in the urine or subject to P450 glucuronidation.[5]

A good deal of punicalagins are metabolized by colonic microflora into ellagic acid derivatives,[8] namely the urolithins.[12] As mentioned before, varying levels of colonic bacteria capable of conducting this fermentation may explain the high levels of variation seen in individuals.[9]

The ethanolic extract of pomegranate appears to inhibit both acetylcholinesterase and butylcholinesterase with IC50 values of 14.83 and 2.65mcg/mL, respectively, which was thought to be due to the high polyphenolic content.[13]

Pomegranate ellagitannins (Punicalagins) at high doses (50-500mg/kg bodyweight) has been implicated in rats for having protective effects in those with gastric ulcers in a dose-dependent manner[14] and may be protective against aspirin and ethanol-induced ulcers.[15] The mechanism of protection appears to be anti-oxidative in mechanism[15] and about 29% of an oral dose of punicalagins survive acid digestion in the stomach[16]; the stomach may be the one organ where punicalagins' high anti-oxidant capabilities in vitro[1] may be physiologically relevant.

In an animal model of Crohn's disease, the metabolite Urolithin shows anti-inflammatory protective effects and beneficially modulates intestinal microflora.[17] When co-cultured with pomegranate extract, Urolithins can increase rate of growth of some bacterial strains.[18] The former effects were also seen with Urolithin's parent compound, Ellagic Acid[19] and the larger molecule of Ellagitannin,[20] although relative to both Ellagic acid and the parent ellagitannin compounds Urolithins are more anti-inflammatory.[21] Urolithin A appears to possess a few anti-inflammatory mechanisms that Urolithin B does not (COX-2 inhibition and c-Jun N-Terminal Kinase inhibition).[21]

Similar to many isolated plant bioactives, pomegranate extract is able to inhibit glucose uptake in the intestines.[22] Its IC50 value was 424ug/mL and the protein content of SGLT-1 downregulated. These are possible mechanisms for Pomegranate having an anti-diabetic effect.[22]

The inhibition of sulfurotransferases in the intestines carries over to the liver for pomegranate.[23]

Pomegranate seed extract, at a dose of 300mg/kg bodyweight in rats, is effective in protecting the liver from injury induced by Cisplatin.[24] Interestingly, ethanol extracts of pomegranate flower share this effect when injected at 9mg/kg bodyweight or orally at 50-150mg/kg.[25][26] Although these effects are seen vicariously through anti-oxidation (and thus punicalagins suspect)[27], the seed extract may be more potent overall as Pomegranate contains a bioactive fatty acid called Punicic Acid, which also aids the liver.[28]

General liver protection, but by relatively unspectacular means and unknown potency relative to other compounds

One study has noted that the anti-inflammatory effects of pomegranate extract (mediated via Nrf2 induction and NF-kB inhibition) was effective at oral doses of 1-10g/kg in rats to suppress cancerous growth in the liver.[29]

Pomegranate seed extract, at a dose of 300mg/kg bodyweight in rats, is effective in protecting the kidney from injury induced by Cisplatin.[24]

Punicalagins, in in vitro assays (ABTS, DPPH, DMPD, and FRAP) shows more potent anti-oxidative capabilities than does green tea (1g brewed in water) and red wine (1997 Cabernet Sauvignon). Fresh pomegranate juice from arils is approximately twice as potent as green tea and red wine in these assays, with commercial juices about thrice as high.[1]

Due to excessive colonic fermentation of punicalagins[8] and the derivatives having much less oxidative capacity, as well as 3-6% punicalagins circulating in serum, it is unlikely that pomegranate has much more biological significance than these standards.

In vivo studies attribute most anti-oxidative effects to various polyphenols, and note a 2.55, 1.62, and 1.43-fold increases at 30, 60, and 120 minutes post consumption of 318mg punicalagins + 21.6mg ellagic acid, respectively.[3] A second spike comparable to the first was seen at 6 hours, but it is not certain whether this is due to food ingestion in the subjects or slower absorbing compounds in pomegranate.[3] Since ellagic acid's Tmax is one hour, it cannot solely explain the 30 minute measurement. Studies using 180mL juice that attained a serum value of 18.5ng/mL failed to find changes in anti-oxidants capacity in the blood.[11]

Punicalagins have been found to induce Nitric Oxide Synthase in vitro[30] in vacular endothelial cells, although more potent effects have been seen with the whole juice.[31]

An animal model looking at pomegranate juice's effects on pre-loading when a cell is subject to shear stress, nitric oxide levels are augmented slightly with Pomegranate juice extracts and cyclic cGMP increased.[31]

Pomegranate Juice, at 50mL with 150mmol polyphenols (using the molar mass of punicalagin, about 150mg), was able to reduce systolic blood pressure by 5% and reduce ACE levels by 36% over 2 weeks, in persons on blood pressure medication.[32] This study notes that the drop in blood pressure was not solely due to ACE inhibition due to lack of correlation[32] and citing an anti-oxidant's ability to aid the endothelium directly[33] and/or dietary polyphenolic ability to increase Nitric Oxide Expression.[34]

Puunicalagins may have preventative potential for Prostate cancer, as one study spanning 33 months of therapy with POMx (a pomegranate extract supplement) at 8oz daily was able to suppress Prostate Specific Antigen doubling time (time it takes for PSA to double) from 15.6 months in control to 54.7 months in experimental.[37] Later, a follow-up study spanning 18 months using 1-3g POMx supplements found increases in PSA doubling time from 11.9-12.2 months at baseline to 17.5-18.8 months after 18 months of treatment, with no significant difference between 1000mg and 3000mg of POMx.[38] Both studies recieved grants from and are involved with POMx.[38][37]

Pomegranate juices, when processed into a gel, was able to enhance the anti-gingivitis efficacy of standard treatment when applied afterwards.[40]

Pomegranate peel extract has been shown to reduce the motility of uropathogenic Escherichia coli, a common bacteria implicated in urinary tract infections.[41] This may be a mechanistic explanation for Pomegranate's benefits with urinary tract health.

A report of three case studies that shared the common link of pairing pomegranate juice (source of punicalagins) and Viagra at 50mg can be found here, where all subjects reported low-flow Priapisms, with erections ranging from 5-8 hours.[42] This increased efficacy of Viagra under the influence of pomegranate juice may be mediated through pomegranate juice inhibiting CYP2C9[43] which accounts for about 21% of Viagra metabolism (the other 79% being attributed to CYP3A4) and causing higher than normal levels of Viagra to circulate in the blood.[44]

Pomegranate juice has been associated with priapism induced by Viagra, and may be classified as an 'Adverse Drug-Herb reaction'

An oral toxicity test in humans found no adverse effects at a dosage of 4269-4330mg/kg bodyweight Pomegranate Seed Oil; a dose of thrice that (13,710-14,214 mg/kg) was found to increase size of the liver, but may have been transiently due to punicic acid and was deemed not toxicologically relevant.[45] Thus, Pomegranate seed oil up to 4.3g/kg bodyweight is seen as free from harm.

Studies on the actual fruit extract, no adverse effects have been seen in rats with a gastric dose of 1.2mg/kg bodyweight[46] and oral intakes of up to 5g/kg bodyweight Pomegranate Fruit Extract (standardized to 30% punicalagins) has been deemed non-toxic acutely, with 600mg/kg bodyweight showing no toxic effects over 90 days.[47]

This page features 47 references. All factual claims are followed by specifically-applicable references. Click here to see the full set of research information and references for Punicalagins.