Juniperus Chinensis is a plant with folklore but no proven medical uses; is an effective insect repellant. It may have protective effects against colon cancer, and the lone rat study assessing glucose tolerance noted fairly remarkable anti-diabetic effects.

This page features 25 references. All factual claims are followed by specifically-applicable references. Click here to see the full set of references for this page.

Juniperus Chinensis (of the Cupressaceae family) is a Korean folk remedy sometimes referred to as byakushin and general East Asian tonic that moonlights as a house plant, and has a folklore history for anti-tumor, anti-bacterial, anti-fungal, abortifacient, anti-platelet, vasorelaxing, and anti-viral activities.[1][2][3][4] It does not appear to have a history of medicinal usage beyond these folklore uses, although the abortifacient properties (induce abortion) of the Juniperus genera has been noted.[5]

It also appears to be used as an insecticide and insect repellant via the aromatic components.[6][7]

Some folklore history that is seemingly unremarkable; potential use as an abortifacient (not necessarily a good thing) and as an insect repellant against mosquitoes

It contains various compounds such as:

Widdrol appears to be the major component in Juniperus Chinensis that is seen as unique to this plant, although some other compounds (such as the flavanoids) appear to also be relatively unique 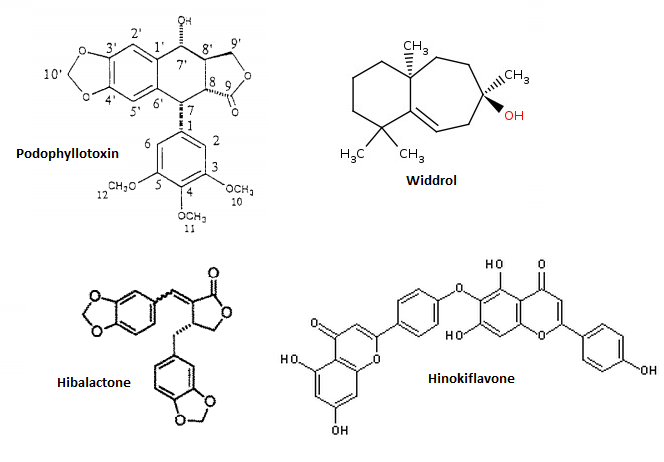 A water extract of Juniperus Chinensis was given at 1% of the diet to normal rats fed a high-fat diet for 79 days noted that Juniperus was able to attenuate the rate of weight gain to 85.9% of high fat control, but failed to match the normal chow diet (leanest of all three groups); no changes in food intake were reported.[20] The Juniperus group appears to have higher levels of active AMPK than the high fat control, but not to the level of lean control.

May have weak anti-obese effects, but nothing remarkable

A study in alloxan-induced diabetic rats (model of type I diabetes), the berries of Juniper were crushed and extracted with either water or ethanol.[21] Acutely, 50-150mg/kg of the ethanolic extract orally significantly reduced blood glucose from 479-491mg/dL to 72-110mg/dL with no apparent dose-dependence; these acute serum glucose levels were lower than non-diabetic control (118mg/dL).[21] These potent acute effects seem to be concentrated in the ethanolic extract, and significantly outperformed Glibenclamide over 9 hours (Glibenclamide reducing glucose to 64% of baseline levels and the ethanolic extract reducing them to 40% at 9 hours) with increasing efficacy up until that time point.[21] A limitation of this study is using Glibenclamide in an alloxan-diabetic model (as Glibenclamide reduces glucose by stimulating beta-cells of the pancreas) so the degree of potency may appear more than it actually is.[21]

Only one study with seemingly remarkable effects with the ethanolic extract of Juniper fruits, which really needs to be replicated; way too preliminary to make any conclusions

Widdrol appears to exert cytotoxic and anti-proliferative effects on colonic adenocarcinoma HT29 cells in a dose-dependent manner, associated with an increase in caspase activity (indicative of apoptosis via mitochondrial damage).[1] Apoptosis induced by Widdrol appears to occur at the G1 phase of the cell cycle (increasing the cell population in G1 from 38.6% to 53.3% at 113uM after 30 minutes; decreasing a bit then elevating to 79.9% at 24 hours),[1][22] and may be secondary to a rapid and quick activation of p21 via phosphorylation.[22][23] Secondary to activation of p21, Cdk2 and cyclin E are both downregulated.[23]

A significant downregulation of Mini-Chromosome Maintenance (MCM) proteins was observed in cells that accumulated at G1,[22][23] MCM proteins protect the genome from damage[24] and tend to be overexpressed in cancer cells,[25] so their suppression by Widdrol may preserve pro-apoptotic damages to the genome of cancer cells. A subsequent study noted that the MCM protein MCM4 specifically was downregulated to 40% of control.[23]

Widdrol appears to activate p21 and reduce MCM proteins, which may make the genome vulnerable to oxidative damage

Widdrol, at 216uM concentration, is able to directly induce DNA strand breaks in vitro in colon cancer HT29 cells while its effects in normal mouse fibroblast cells (SC-1) that concentrations of Widdrol up to 562uM were not significantly cytotoxic; suggesting selective cytotoxicity in tumor cells and no alteration of MCM proteins was noted.[23]

This page features 25 references. All factual claims are followed by specifically-applicable references. Click here to see the full set of research information and references for Juniperus chinensis.