This page features 55 references. All factual claims are followed by specifically-applicable references. Click here to see the full set of references for this page.

Polygonum Cuspidatum is a herb in the polygonaceae family (alongside Rheum palmatum L and the similar plant Polygonum multiflorum) and the genera of Fallopia; it is native to eastern China and Japan and is sometimes (most commonly) referred to as Japanese Knotweed. Polygonum Cuspidatum has been used traditionally for its medicinal qualities, specifically treatment of artherosclerosis as well as cancer, asthma, hypertension, and cough.

Interestingly, Japanese Knotweed is seen as an invasive plant species and causing problems in a variety of areas in the globe.[3][4][5]

Its simple, we eat the knotweed and save the other plants

The following molecules are found in the three variants of Polygonum Cuspidatum, but the quantities specified below are specific to var. Japonicus; this variant tends to be highest in stilbenes, with minimal levels in the other two species.[2]

Focus on the stilbenes (first four bullets) and the quinones (bullets 5-8) as the active ingredients; the other compounds are found in the herb, but either to lesser amounts or are not the focus of current research

Resveratrol and its glucoside piceid range from 0.04-0.1mg/g and 0.2-0.51mg/g in Polygonum Cuspidatum var. sachalinensis, while piceatannol and its glucoside Astringin range from 0.006-0.008mg/g and 0.04-0.22mg/g, respectively.[2] Polygonum Cuspidatum var. bohemica ranges from 0.08-0.95mg/g, 1.72-7.32mg/g, 0.01-0.095mg/g, and 0.31-1.87mg/g for resveratrol, piceid, piceatannol, and astringin respectively.[2] Put collectively, Japonicus is the standard and appears to be best while bohemica can potentially be competitive and sachalinensis possesses much less stilbenes than the other two variants.

Resveratroloside appears to be similar in content to piceatannol when measured.[9]

The wide range of content for the stilbenes (resveratrol and piceatannol) vary both depending on species as well as between samples of the same species; quite an unreliable content. As for what a 'glucoside' or 'glycoside' are, they are storage forms of the parent molecule which may or may not also be absorbed and thus be bioactive; piceid is literally a resveratrol molecule bound to a glucose molecule

The following structures are the four (most commonly researched) stilbenes found in Japanese Knotweed; the stilbene resveratroloside looks the same as piceid except with the glucose moiety bound to the 4' carbon rather than the 3 carbon (other hexagon of the structure, on the opposite side of the middle chain). Polydatin is also similar, in the fact that its glucose moiety is bound to the 5' carbon (one below the 4').[24] 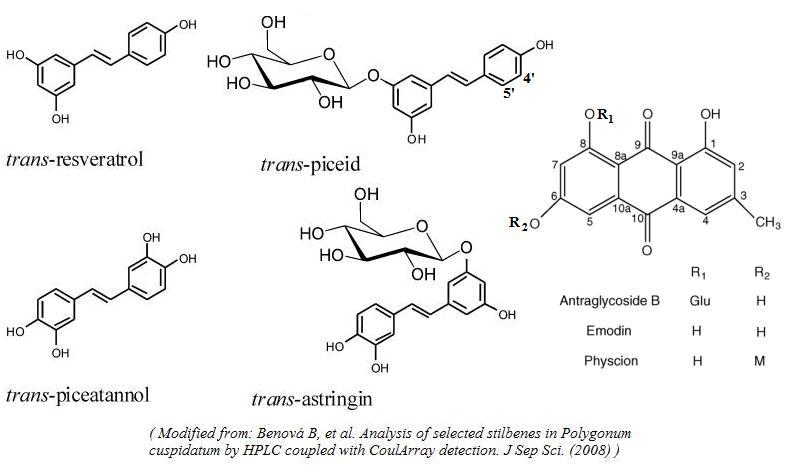 Resveratrol and its glucoside Piceid appear to be structurally stable when exposed to light and the open environment (room temperature) for up to three months,[25] although stability of resveratrol in Japanese knotweed insulted by environmental stressors is not as good;[26] prudency and good storage should still be practised.

In general, Japanese Knotweed extract possesses moderately potent anti-oxidant capabilities,[23] second to the species of capitatum but higher than chinensis and multiflorum as assessed in vitro.[27] The anti-oxidant capacity of Polygonum Cuspidatum has been reported to be 56.22mmol/100g Trolox equivalents and 6.33g/100g Gallic acid equivalents, and has been shown to extend to the leaves and stems as well as the roots.[27] According to this study[28] which analyzed 112 herbs and summed up that anti-cancer herbs from Traditional Chinese Medicine tend to have higher anti-oxidative capacities than common fruits and vegetables, it was found that (according to Trolox equivalents of the methanolic extract, a way to measure anti-oxidant potential) Japanese knotweed placed 14th out of 112, with 35% of the potency (on a gram to gram basis) as Camellia Sinensis, the most common source of Green Tea catechins and 5th place overall. The winners were the gall of Rhus chinensis and the branch/stem of Acacia catechu, with 3.28x and 2.12x greater anti-oxidative effects relative to Camellia Sinensis, respectively.[28]

Three main classes of compounds, and their content and individual anti-oxidant potential is pretty good relative to other herbs out there

Resveratrol has had its pharmacokinetics analyzed on its own page; a short summary is that oral ingestion of resveratrol has poor bioavailability but it can be enhanced with consumption of other nutrients alongside it.

Distribution of resveratrol after oral administration (20mg/kg) in rats appear to reach the heart (up to 743.4+/-45.77ng/mL) yet are excreted almost completely by 60 minutes, the liver at around 2mcg/mL (2,000ng/mL) for up to 60 minutes, up to 2.8mcg/mL in the lung tissue at 60 minutes yet almost undetectable prior, moderate amounts in the kidney (0.8-1.3mcg/mL) between 30-60 minutes, with most being detected in the stomach and none in the brain at up to 60 minutes.[29] This is similar distribution data found in mice given isolated resveratrol,[30][31] except none was found in the brain in this study; the lack of finding resveratrol in the brain, as well as the high (48.2mcg/mL) content in the stomach may be due to the study terminating at 60 minutes.[29]

Polygonum Cuspidatum appears to be able to inhibit both the CYP3A enzyme as well as the efflux protein 'MultiDrug Resistance Protein 2' (MRP2)[32] and may interact with pharmaceuticals such as carbamazepine that are metabolized by these enzymes. In an investigation into whether Resveratrol from Japanese Knotweed could upregulate CYP3A4 via CAR, it was found to not possess this capability.[33]

The one human study conducted using Japanese Knotweed found that, after 6 weeks supplementation of 200mg (40mg Resveratrol) daily, that extracted immune cells had 25% less translocation of NF-kB; NF-kB is a mediator of inflammation, and this was overall a reduction in inflammation.[34] The reduction in NF-kB activity resulted in less circulating TNF-a and IL-6 as well; two inflammatory cytokines.[34] Large doses in animals (100-200mg/kg ethyl acetate fraction) have been shown to induce anti-inflammatory effects acutely, and showed promise in an animal model of rheumatoid arthritis.[35]

The napthaquinone from Japanese Knotweed has been demonstrated to be a potent inhibitor of the HRV 3C-protease enzyme with an IC50 of 4.6uM.[20] This enzyme is required for replication of the Rhinovirus, which is the most common agent for the common cold;[36] thus inhibitors are being investigated for reducing the occurrence of and severity of the common cold, such as rupintrivir (AG-7088).[37]

Emodin, the anthraquinone compound, is being investigated for its ability to suppress activation of mast cells via preventing IgE from associating with FcɛRI. The binding of IgE to FcɛRI on mast cells is the first stage of the anaphylactic response on mast cells,[38] and eventually results in histamine release. Emodin seems to inhibit this response dose-dependently after oral administration of 5-40mg/kg bodyweight[39] and Japanese Knotweed extract appears to be quite effective as well, with an IC50 value of 62+/-2.1ug/mL on mast cells.[40]

Interactions with Japanese Knotweed and reducing allergies, potency of this effect in humans is not known; may extend to topical usage for nickel dermatitis

Polydatin, or the glucoside of resveratrol, has been shown to protect rats from cognitive decline in a model of dementia when supplemented over 30 days at 12.5, 25, and 50mg/kg bodyweight orally.[24] 25mg/kg Polydatin was slightly less protective than 25mg/kg Ginkgo Biloba, but insignificantly so.[24] Resveratrol from Japanese Knotweed also shows benefit itself at 20mg/kg oral ingestion.[41]

Napthaquinones from Japanese Knotweed do show protective effects as well in vitro, secondary to their anti-oxidant effects.[19] Oxidative damage was completely abolished, and cell viability actually increased above control at the higher concentrations tested (2.5uM, 5uM; 0.05-1uM protected but did not increase viability above control).[19]

Emodin has been demonstrated to protect neurons from damage in vitro, but these results may not be practically relevant as emodin possesses a low bioavailability.[42]

Although the doses requires to show neuroprotection are high (20mg/kg resveratrol, 12.5mg/kg polydactin) there appear to be multiple neuroprotective compounds; whether this is better or worse than isolated but more potent compounds is not known

The active molecules behind this estrogenicity may be the anthraquinone content,[44] although they appear to inhibit binding of 17β-estradiol to its receptor when coincubated and may act as both agonists (during estrogen deficiency) and competitive antagonists (during estrogen surplus).[44] However, emodin (the most prominent anthraquinone) has an EC50 of 10.1+/-0.36 ng/mL[45] while the whole knotweed was more effective at 6.4ug/mL.[43] suggesting there is another compound with potency estrogenic effects. One study dividing fragments of Polygonum saw that the fragment with the most emodin (Hzs1) was matched by one with no emodin content (Hzs6), and this was contributed to an unknown compound.[45]

Seems to be a phytoestrogenic compound in vitro, but anthraquinones usually have low bioavailability (percentage absorbed in the intestines; hence why they make good laxative compounds) and so this estrogenicity may not be practically relevant

Japanese knotweed has been shown to somewhat permeate the skin,[46] and thus its usage as a cosmetic agent for topical application has been investigated.

When tested in melanocytes (melanin producting cells under the skin), a component in Polygonum called Piceid is able to inhibit tyrosinase activity in a dose-dependent manner[7] and may act as a skin lightening agent. Piceid is not a potent inhibitor of tyrosinase directly[47] but appears to suppress mRNA and subsequent protein content of tyrosinase.[7] Resveratrol also possesses an indirect inhibitory mechanism, as Resveratrol is a substrate for tyrosinase and its metabolites then accumulate and inhibit activity.[48][49] Piceatannol, also a component of Japanese Knotweed, can suppress melanogenesis via tyrosinase by its anti-oxidant effects, and like Piceid it can downregulate melanin content[50] and Emodin, the anthraquinone, can suppress tyrosinase activity directly[51] although the related anthraquinone physcion is more potent and had 48 times more dermal penetration.[52]

Beyond lightening, Japanese Knotweed has been shown in rats to accelerate wound healing and enhance the quality of the repaired wound relative to an untreated control.[53] Anti-inflammatory effects of Polygonum Cuspidatum have also been seen when applied topically, mostly due to the trans-resveratrol content.[54]

Possibly by pure changes, compounds in Japanese Knotweed appear to all inhibit tyrosinase activity via different mechanisms and may be highly synergistic with each other when applied topically; this has not been tested, however. Japanese Knotweed does appear to reduce inflammation when topically applied, and may reduce both acne and nickel dermatitis as well (although these leads need more evidence to fully validate)

This page features 55 references. All factual claims are followed by specifically-applicable references. Click here to see the full set of research information and references for Japanese Knotweed.