Codonopsis Pilosula (Dangshen) is a herb that has historically been used as a cheap replacement for Panax Ginseng which was costly. Dangshen may have cognitive boosting capacities on its own, but is quite understudied.

Codonopsis Pilosula is a herb belonging to the family of Campanulaceae and is also known as Dangshen (not to be confused with Danshen, a name for the herb Salvia miltiorrhiza) that is commonly used in Traditional Chinese Medicine; where it is most well known for being a low-cost substitute for Panax Ginseng, where some historical texts falsely call Codonopsis 'Chinese Ginseng'.[2] Codonopsis Pilosula is sometimes found to be mixed with Campanumoea javanica in the same plant family as an adulterant.[3]

Codonopsis Pilosula has intentionally been used itself mostly for a spleen and lung tonic, as well as a digestive aid targeted towards the stomach.

The following bioactives are found in Codonopsis Pilosula:

Main bioactives that may underlie bioactivities of Codonopsis Pilosula, most likely the alkaloids; although Codonopilates are large structures with side chains, all other alkaloids (Codonopyrrolidium B, Codotubulosine A and B, Codonopsine and Codonopsinine) have pyrrolidine alkaloids structures, similar to Piracetam and the racetam family

The Codonopsis Pilosula herb tends to contain the following crude polysaccharides (totalling around 4.55% of the weight of the plant[8]):

A few polysaccharides (chains of carbohydrates, a component of the carbohydrate content of the plant) may also possess bioactivity 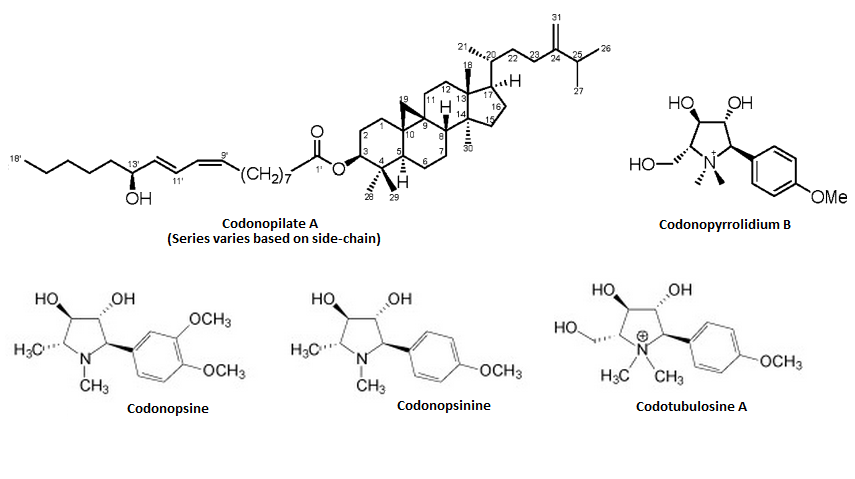 One rat study noted that ingestion of Codonopsis resulted in attenuation of the memory-impairing effects of scopolamine as well as alcohol (30g/kg) in mice and rats, and was thought to be secondary to a bioactive in the n-butyl alcohol fraction which was shown to increase the density of muscarinic cholinergic receptors in the brain; no binding or alterations in affinity were noted.[13]

Currently, other studies that note interactions with the cholinergic system have found increased tension in the smooth muscle tissue of the stomach, which was partially blocked by Atropine.[14]

Possibly something related to acetylcholine receptors may contribute, but the evidence is currently subpar

Codonopsis alkaloids were found to suppress cell growth of the neural cell line PC12. Cell growth was suppressed by up to 15% at the concentration of 30ug/mL under the influence of NGF at 2ug/mL; in this study, 100ug/mL of Codonopsis was required to be equally effective as 50ug/mL NGF in suppressing proliferation (to 80% of control).[15]

Codonopsis alkaloids have been found to, in vitro, enhance NGF-induced neuronal outgrowth in PC12 cells. Although it alone failed to enhance neurite length, 2ug/mL enhanced NGF-induced growth from 7.0+/-3% to 52.0+/-8%; 742% the growth of NGF alone.[15] Synergism were noted to be statistically significant at 10ug/mL, and missed statistical significance at 3ug/mL.[15] These benefits appeared to be mediated via MAPK (the pathway mediated by NGF[16]), as incubation with the inhibitor PD98059 suppressed growth.[15] In Schwann cells (RSC 69) it was found that the signalling via MAPK is p38 and ERK dependent,[17] where concentrations of 10-100ug/mL for 16 hours significantly increased proliferation of cell nuclear antigen (up to 120% at 60ug/mL) and increased Schwann cell proliferation around 350% of control at 20-40ug/mL and increased cell migration in a dose-dependent manner coupled with increased MMP9 and uPA, which may be downstream of an increase in FGF-2.[17] The authors hypothesized that the increase of neuronal proliferation and migration could aid nerve regeneration.[17]

Too preliminary to draw conclusions, but some bioactives in Codonopsis (alkaloids in structure) appear to enhance neuronal differentiation in vitro.

One study assessing brain slice homogenates (in vitro) noted that an extract of Codonopsis pilosula was able to exert anti-lipid peroxidative effects, 8.3-9.8% inhibition with 100-500ug/mL of the water extract but 16.7-30.4% inhibition with a butanolic extract.[18]

Currently, one human study using Codonopsis in conjunction with Ginkgo Biloba at 75mg and 40mg respectively noted improvements in memory aquisition and retention that was greater than an equal dose of Ginkgo Biloba suggesting additive or synergistic effects; Codonopsis was not tested in isolation.[1]

One in vitro study on a polysaccharide fragment from Codonopsis Pilosula found a dose dependent relationship between splenocyte proliferation in respose to LPS (+77.4%) or ConcavalinA (+75%) treatment.[11] This inflamatory role has been replicated in vivo where a polysaccharide fragment from Codonopsis Pilosula was shown to increase antigen production when administered with a vaccine, suggesting an the fragment can be used as an adjuvant.[19]

One study assessing macrophage phagocytosis found one isolated polysaccharide to, after oral ingestion of 50 or 100mg/kg daily, increase phagocytotic capabilities by 15.6% and 28.7%; respectively.[20] As there was efficacy with the polysaccharide (CPPW1) but not the polysaccharide without side-chains (CPPW1B), the side chains were deemed critical to the immunological function of Codonopsis.[20]

One in vitro study using the HO-8910 (human ovarian cancer) cell line noted that treatment with an acidic polysaccharide derived from the roots appeared to reduce the invasion and migration potential of the tumor cell while suppressing proliferation; thought to be through a reduction in CD44 expression, a cellular adhesion molecule that had its expression (as a percentage of total cells) decreased dose-dependently in response to the acidic polysaccharide.[9] Cell survival after 48 hour incubation reached 81.72% of baseline at 25ug/mL, and appeared to reach 39.35% at 200ug/mL, suggestive of apoptotic capabilities as well.[9] Inhibition of tumor growth has been noted in mice injected with tumor cells in response to oral administration of 50 or 100mg/kg of one of two polysaccharides in the range of 22.86-56.73% inhibition; the active control of cyclophosphamide at 30mg/kg injected achieved 63.67% inhibition.[20]

At least one study has been conducted with combination therapy (Codonopsis pilosula 27.1mg, Angelicae Sinensis 64.5mg, Ganoderma Lucidum at 3mg, and an oil extract of Geranium at 273.6mg) daily for 2 years in a group of cancer patients recieving chemotherapy and/or radiotherapy. Subjects recieving the combination therapy showed a smaller reduction in leukocyte counts (-14.2% vs. -22.8% in the control group), and a smaller reduction in neutrophil counts (-11.0% vs. -29.1% in the control group).[21] NK cells were reduced in control (80% of baseline) but not experimental, but intervention had no preservative effect on B cells, which dropped to about 70% in both groups.[21]. Because this study used a combination therapy, the specific role of C. pilosula can't be defined.

This page features 21 references. All factual claims are followed by specifically-applicable references. Click here to see the full set of research information and references for Codonopsis pilosula.