Vitamin D may reduce the risk of developing an autoimmune disease

This Study Summary was published on March 2, 2022.

Autoimmune diseases are the result of immune cells attacking normal cells in the body, causing inflammation and tissue damage. More than 80 diseases are believed to be autoimmune in nature,[1] each featuring a variety of affected tissues and symptoms, including: 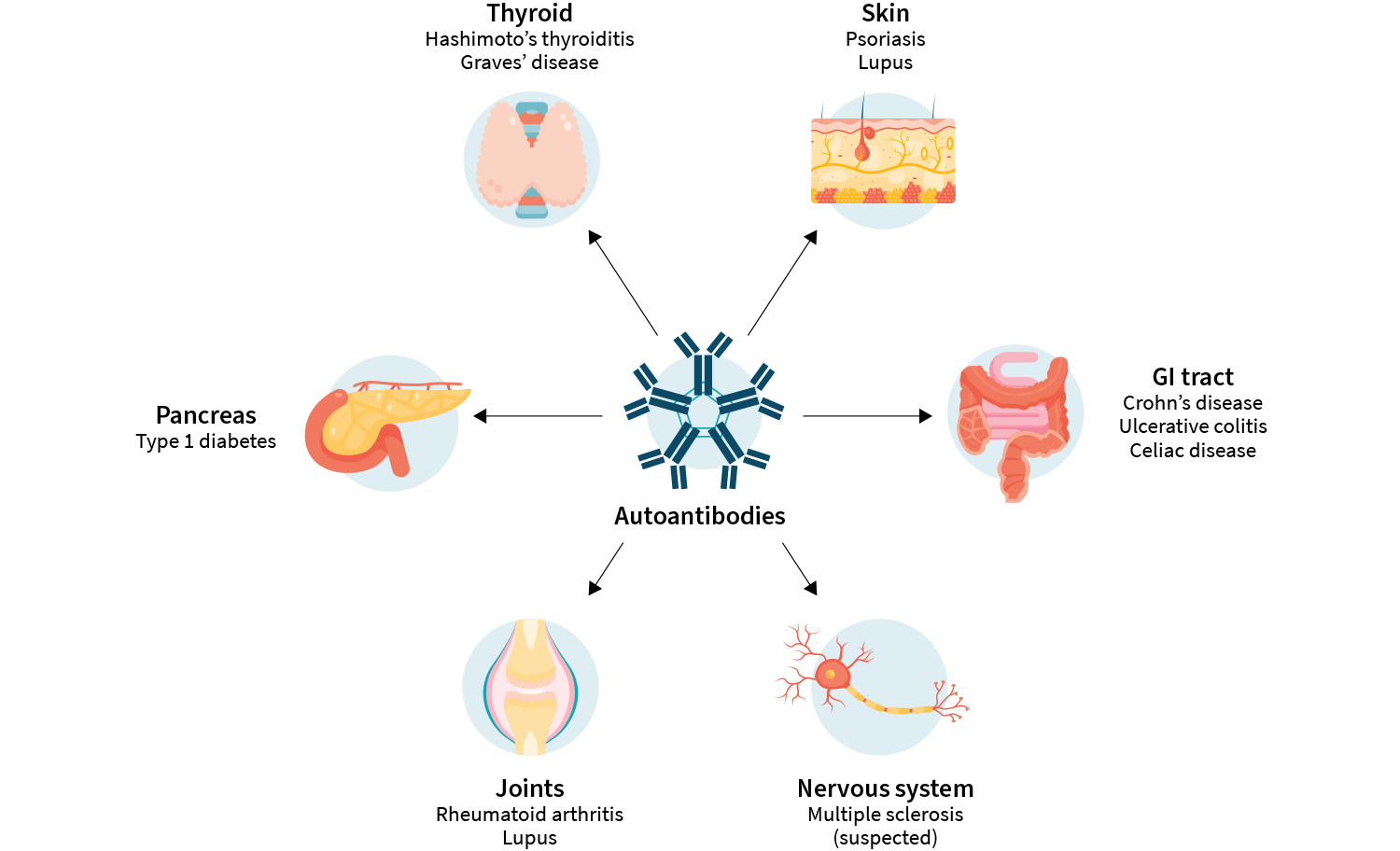 Autoimmune diseases are highly prevalent, affecting around 7–9% of the population.[1] Alongside their immediate adverse effects, a number of autoimmune disease seem to increase the risk of developing other serious diseases, including:

Lower levels of vitamin D have frequently been linked to higher odds of autoimmune diseases, as well as more severe symptoms in pre-existing diseases.[8][9][10][11][12][13] Based on these findings, a number of randomized controlled trials have tested the effect of vitamin D on people with specific autoimmune diseases. Researchers found improvements in these trials in the context of rheumatoid arthritis.[14] However, there was no observed effect on disease activity for other conditions, specifically MS,[15] ulcerative colitis and Crohn’s disease,[16] psoriasis,[17] and SLE.[18] Note that these findings were often the result of small trials that also didn’t isolate participants with vitamin D deficiency.

Omega-3 fatty acids, meanwhile, have been suggested to provide benefits in the context of autoimmune disease, partially due to their potential effects on inflammation and immune function.[19] Randomized controlled trials testing this hypothesis have found some benefits for rheumatoid arthritis[20] and SLE[21] but perhaps not psoriasis[22] or MS.[23] However, it bears repeating that the effects of supplementation after disease onset may not predict the ability to prevent the disease in the first place. Currently, only a couple of clinical trials have reported the effect of omega-3 fatty acids on the risk of autoimmune disease, specifically ulcerative colitis and Crohn’s disease, with no apparent effect.[24]

In summary, there is a need for a randomized controlled trial assessing whether supplementation with vitamin D and omega-3 fatty acids can reduce the risk of developing an autoimmune disease.

This randomized controlled trial, part of the VITamin D and OmegA-3 TriaL (VITAL), tested the effect of vitamin D and omega-3 supplementation on the incidence of autoimmune disease. A total of 25,871 people (mean age of 67) from around the U.S. were assigned to one of the following four groups:

Incidence of autoimmune disease between groups

The average vitamin D level in all participants at baseline was 30.7 ng/mL, with 12.9% of participants having levels below 20 ng/mL. For reference, vitamin D sufficiency is often defined as levels above 30 ng/mL, insufficiency as levels between 20 and 30 ng/mL, and deficiency as levels below 20 ng/mL. Vitamin D levels increased by 40% in the groups taking vitamin D. The average omega-3 index (a measure of EPA and DHA in red blood cells relative to other fats) at baseline was 2.6. Omega-3 index increased by 54.7% in the groups given omega-3.

There are a few hypothesized mechanisms that may explain why vitamin D could reduce the risk of autoimmune diseases, if indeed it does. Vitamin D exerts its biological effects by binding to and activating the vitamin D receptor (VDR). After vitamin D enters the bloodstream from a supplement, food source, or following ultraviolet light exposure, it’s metabolized in several steps to form 1,25-hydroxyvitamin D, or 1,25(OH)2D. This form of vitamin D is considered the “active” form and is primarily responsible for binding to and activating the VDR. The VDR is located inside the nucleus of various cells, and its activation can lead to changes in the expression of dozens, if not hundreds, of genes, depending on the cell type.[25] VDRs are found in a variety of immune cells, including T cells,[26][27] which is noteworthy because T cells may be central to the initiation of autoimmune diseases.

Altered function of T cells appears to prime the immune system to mistakenly attack the body’s own tissues in a manner that does not resolve, meaning the response continues indefinitely.[28][29] Numerous factors, often in combination, seem to cause these negative alterations to T cells, including genetic predispositions and environmental exposures, with the latter frequently coming in the form of pathogenic infections.[30] Some research from preclinical and animal studies suggests that vitamin D may modulate T cell populations, making them less prone to inducing autoimmunity.[31][32] A few human clinical trials are also consistent with this possibility,[33][34][35] although conflicting evidence also exists.[36]

However, there are good reasons to be skeptical of this finding. First, this study seems at odds with most Mendelian randomization (MR) studies, which look at whether genes that affect vitamin D levels influence the risk of developing various autoimmune diseases. In theory, the genes assessed in MR trials will be randomly distributed across a population, limiting confounding and demonstrating whether the exposure (vitamin D levels) affects the risk of the autoimmune disease in question. It’s therefore noteworthy that Mendelian randomization trials have found higher vitamin D levels are not related to the risk of developing rheumatoid arthritis,[40] SLE,[40] Crohn’s disease,[41] ulcerative colitis,[41] atopic dermatitis,[42] and type 1 diabetes,[43] although a reduction in the risk of MS has been reported.[44] Still, one possibility is that the genes assessed in Mendelian randomization studies may result in only small changes in overall vitamin D levels, making them underpowered to observe an effect.

Another limitation with this study is that it was a substudy of the VITAL trial. The main focus of the VITAL trial was to test the effects of vitamin D and omega-3 on the risk of cardiovascular disease and cancer, but researchers also planned to use the VITAL trial data to look at other outcomes that were of secondary importance. Over 15 such ancillary studies using VITAL trial data were planned, including the present one. This introduces multiplicity, in which testing for many outcomes makes it more likely that differences between groups will appear statistically significant due simply to chance.[45] There are ways to adjust for multiplicity, but these methods may hide true effects by increasing the likelihood of false negatives (i.e., “true” effects could fail to reach statistical significance).[46] As an alternative, some researchers have proposed viewing such findings, particularly when they don’t confirm previous research, as exploratory,[45] although this view has been challenged, with the alternative being to view the results in the specific context in which they were found.[47]

This Study Summary was published on March 2, 2022.