Over 100 studies have investigated the effects of dietary nitrates (commonly in the form of beetroot juice) on physiological responses and physical performance during endurance activities, and a consistent improvement in time-to-exhaustion tasks has been reported.[1][2] More recently, the attention of the scientific community has shifted to the effects of nitrate supplementation on physical performance during brief anaerobic activities (e.g., strength- or sprint-based exercise).

Whereas muscle strength represents the capacity to produce force, muscle power is the product of the force and velocity of muscle contraction. Power is likely more important than strength in determining sports performance and the ability to perform activities of daily living (e.g., climbing stairs).[3][4] Despite an increasing amount of research on the effect of nitrate supplementation on muscle power, there had yet to be a quantitative assessment of the available evidence — which the present study provided.

This meta-analysis of 19 crossover randomized controlled trials examined the effects of nitrate supplementation on muscle power in 268 participants (218 men, 50 women). Muscle power was assessed via isokinetic dynamometry, cycle ergometry, or the inertial-load method. In most of the trials, the participants took an acute dose (14/19 studies) of beetroot juice (17/19 studies) containing an estimated 6.4–15.9 mmol (397–986 mg) of nitrates.

Nitrate supplementation was found to have a small-to-medium effect on muscle power (standardized mean difference: 0.45). The subgroup analyses revealed that a single dose of nitrate was more effective than a multi-day dosing regimen. Also, sex, age, and the amount of muscle mass involved in the exercise test (e.g., knee extension vs. cycling) did not influence the effect of nitrate.

A limitation of this meta-analysis is that most of the included studies assessed neither the actual dose of nitrates ingested nor the plasma levels of nitrates and/or nitrites following ingestion. This is doubly problematic, because the nitrate content of beetroot juice can vary considerably, even when samples are obtained from the same manufacturer,[5] and so plasma levels following ingestion likely vary considerably too.

Nitrates can be found in different foods, notably beetroot and leafy green vegetables. The following table uses averages from multiple samples. Farming techniques, transport, storage conditions, and cooking methods can all greatly affect the actual nitrate and oxalate content of your food.

Nitrates break down into nitrites, which circulate in the body and are turned into nitric oxide (NO). NO promotes vasodilation and improves blood flow to skeletal muscles.

How nitrates are converted into nitric oxide

A robust body of evidence demonstrates a clear ergogenic effect of nitrate supplementation in recreationally active, young, healthy men across various forms of exercise.[13] However, nitrate supplementation is clearly more beneficial for certain types of exercise than for others, and the effect size reported in the present study (i.e., 0.45) is substantially larger than what’s been reported for other measures of physical performance. This includes muscular strength (0.08), time-trial performance (0.086), muscular endurance (0.31),[14] and performance during time-to-exhaustion tasks (0.32).[13][14]

It’s also becoming increasingly apparent that training status mediates the effects of nitrate supplementation. Nitrates are best known for improving performance during time-to-exhaustion tasks, but this ability is negated in athletes with a VO2max above 64.9 mL/kg/min.[13] Unfortunately, the present meta-analysis did not assess the influence of training status on the effect of nitrate supplementation on muscle power; it only noted that 2 of the 3 trials with the smallest effect size included highly trained sprinters.

Nitrates exert their ergogenic effects via a couple of mechanisms:

Potential mechanisms for the effects of NO on exercise 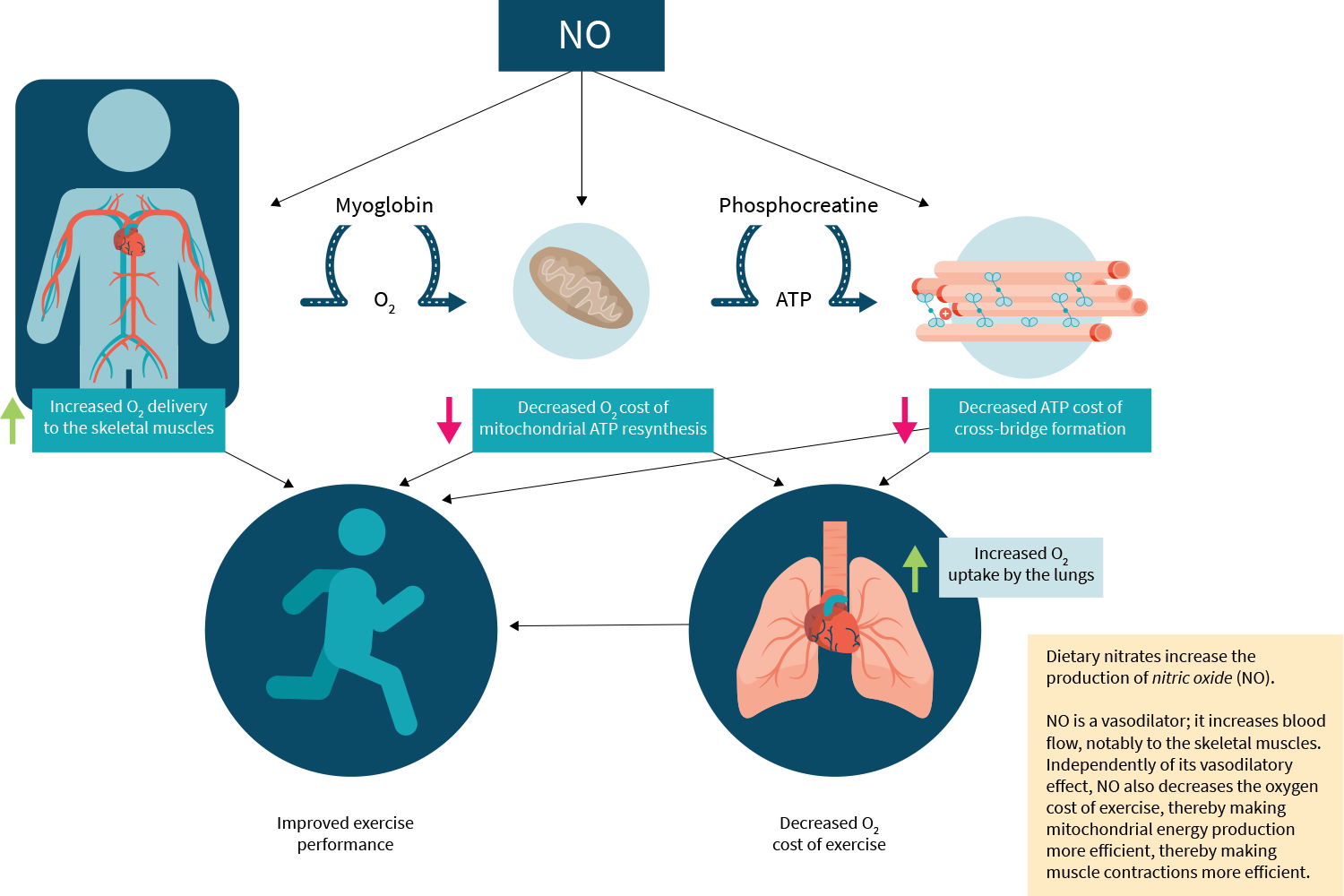