Food addiction: is it real, and does that matter?

Although some researchers argue that certain people are addicted to specific types of food, food addiction has not yet been widely recognized as a valid concept. Yet even if they aren’t formally classified as addiction, some eating behaviors share important features with addiction. 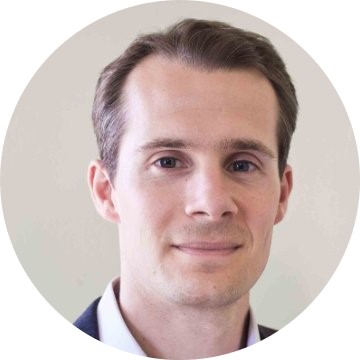 What is food addiction?

Although there is no standard definition of addiction, most descriptions refer to it as a condition in which a person compulsively engages in a reward-seeking behavior, despite negative consequences.[1][2] For example, a person who is addicted to methamphetamine may prioritize drug-seeking and drug-taking behavior at the expense of finances, social relationships, and health. Similarly, a person with a gambling addiction may prioritize gambling over financial stability and social relationships.

A major psychiatry reference text, the Diagnostic and Statistical Manual of Mental Disorders[2] (DSM), doesn’t include food addiction. However, some researchers have taken DSM criteria for diagnosing drug addiction (technically, “substance use disorder”) and adapted them for assessment of food addiction.[3] The resulting tool, called the Yale Food Addiction Scale (YFAS), is a 25-question survey that revolves around the seven features of addiction shown in Figure 1.[3]

Figure 1: The seven features of addiction incorporated into the Yale Food Addiction Scale 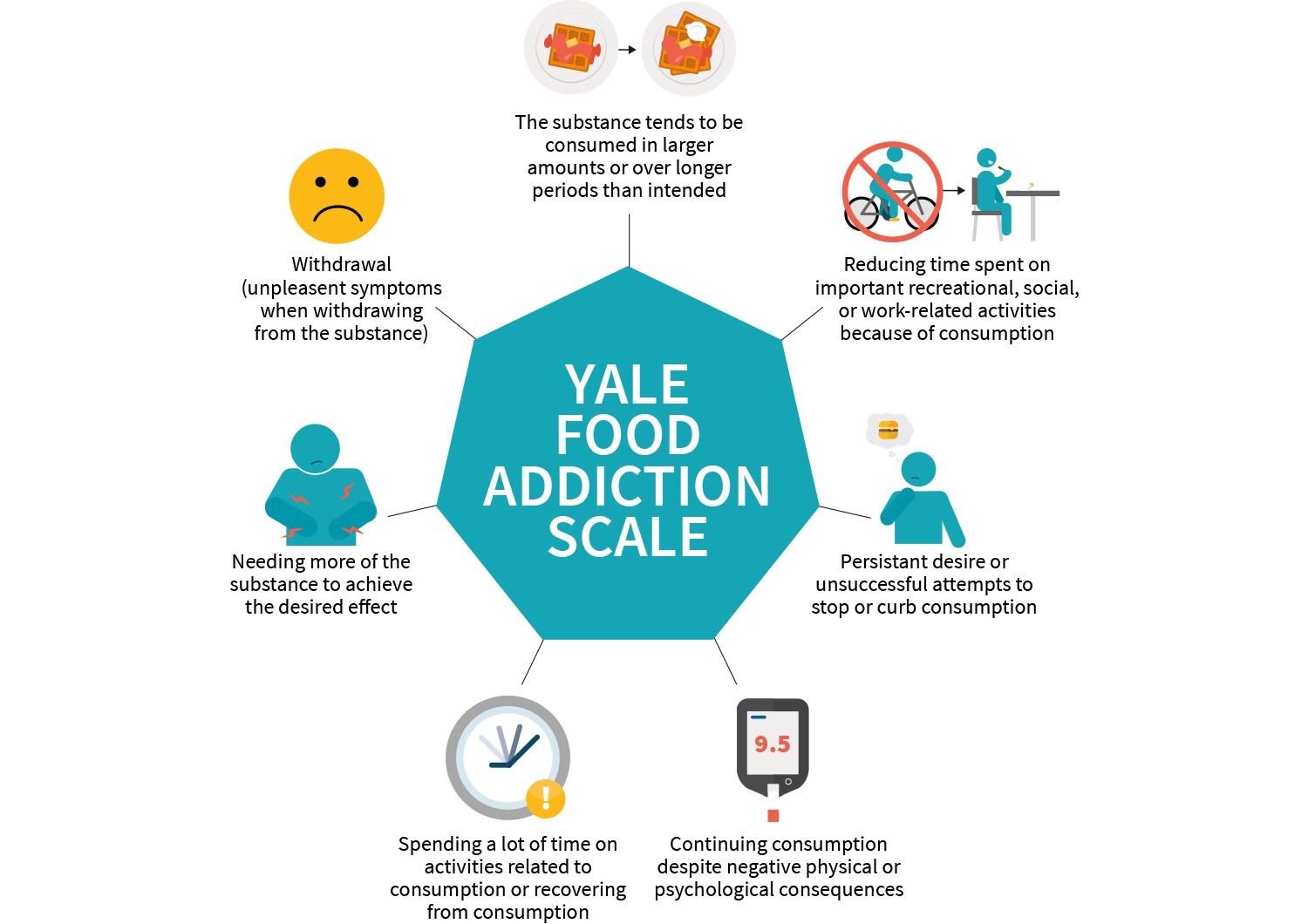 People who experience three of the seven features and have clinically significant impairment or distress resulting from their eating behavior are classified by the YFAS as having “food addiction”.[3] Another recently developed tool is the Addiction-like Eating Behavior Scale (AEBS), which is not directly derived from an analogy with drug addiction.[4]

Despite the complexity of the YFAS, the core principle is the same as in other types of addiction: in food addiction, a person eats certain foods compulsively, despite negative consequences.

Is food addiction recognized as a valid concept?

The brain systems underlying drug addiction are the same systems that motivate us to seek natural rewards like sex and food.[6] In theory, anything that stimulates these systems enough can lead to the problematic behaviors we call addiction. However, studies in animals report that food doesn’t stimulate them nearly as much as highly addictive drugs of abuse, and this is part of the reason why the food addiction concept is controversial.[7]

Although stimulation of motivational systems in the brain by food is a natural and often healthy process, some researchers argue that certain modern foods stimulate these systems to a greater degree than anything our distant ancestors would have eaten regularly. Modern processed foods tend to be more concentrated in the nutrients that stimulate brain motivational systems, especially fats and carbohydrates.[8] This may result in a stronger motivation to acquire and eat these foods, and, in some people, could lead to addiction-like eating behaviors. In support of this, research suggests that calorie-dense processed foods rich in refined carbohydrates and fats are most likely to trigger addiction-like eating behaviors, while simple, unprocessed foods are less likely to trigger these behaviors.[8]

Other key evidence supporting the concept:

Rodent models of disordered eating behavior can produce different outcomes, summarized in Figure 2. Some overlap more with human-like “food addiction” than others. For example, the fat-bingeing model, which offers rodents intermittent access to pure fat, reproduces some features of addiction but not withdrawal.[13][14][15] Furthermore, although continuous access to a diet high in fat and sugar causes obesity, models of fat or sugar bingeing individually do not.[15] This highlights the potentially complex relationship between diet composition, food restriction, food addiction, and obesity.

While rodent models exhibit some aspects of addiction, it’s important to note that there are challenges in drawing conclusions about humans from animal studies, in part due to differences in how our brains and bodies are constructed, and the greater complexity of the human food and social environment.

The analogy with drug addiction has other limitations. Critics have pointed out that food is a natural substance that is required by the body, which makes it fundamentally different from drugs of abuse.[16] Importantly, some of the criteria that are used by the YFAS to diagnose drug addiction in humans, particularly tolerance and withdrawal symptoms, don’t have clear equivalents in human eating behavior.[16]

Critics also argue that the concept of food addiction is a “medicalization of common eating behaviors” and that it’s not needed for people to receive treatment for problematic eating behaviors.[17]

This topic is an open area of research, with new evidence emerging rapidly. Although food addiction did not earn a spot in the latest (5th) edition of the DSM, gambling disorder was moved from the section on impulse-control disorders to the section on substance-related and addictive disorders , which points toward growing recognition of non-substance addictions by clinicians. The stated reasons for including gambling addiction are that gambling activates reward systems in the brain, and that some of its symptoms resemble those of substance use disorders.[2] This is a bar that food addiction may have already cleared,[3][11] so perhaps it will be added in future editions.

What are the risk factors for “food addiction”?

Research on food addiction is still in its infancy, so there’s limited information on the risk factors. However, addiction in general is associated with genetic and psychological risk factors, and it seems possible that these may apply to addiction-like eating behavior as well.

Psychological traits also influence the risk of drug addiction. The dual-process or dual-systems model of drug addiction hypothesizes that addiction is more likely in people who have both a strong drive to seek drug rewards and a weak ability to restrain their drug-seeking impulses.[24] These same psychological traits occur in people who have higher “food addiction” scores on the AEBS,[4] and they are correlated with a higher risk of weight gain over time.[25] Psychological stress, such as post-traumatic stress disorder, is also correlated with a higher risk of “food addiction”.[26]

What types of foods may be “addictive”?

Food causes the release of the “motivation chemical” dopamine in the brain, which is the same system stimulated by drugs of abuse.[27][28][7] While many pleasurable and healthy behaviors — like having sex, listening to music, and eating healthy foods — cause dopamine release, overstimulating this system can lead to addiction.[29]

Surveys suggest that the types of foods that commonly trigger cravings and addiction-like eating behaviors in some people are those that combine high concentrations of dopamine-stimulating nutrients, especially fats and carbohydrates.[30][8] These are foods like chocolate, ice cream, and pizza. In contrast, lower-calorie foods and those that don’t combine concentrated fats and carbohydrates are less common triggers for addiction-like eating behaviors.[8] These are foods like brown rice, fresh fruit, and meats.

🔍 Digging Deeper: The role of reinforcement in food-seeking behavior

When rodents eat foods that contain higher concentrations of specific nutrients, like carbohydrates (including sugar), fats, protein, and glutamate, they become motivated to seek and eat those foods.[31][32][33] This change in motivation and behavior after exposure to a reward is called reinforcement, and it’s a natural way that animals learn to seek food that meets their need for energy and nutrients. When a food is particularly desirable, animals will endure electric shocks and extreme cold to get it, even when healthier but less desirable food is readily available.[34][35] This shows that foods with the right composition can be strongly reinforcing and drive high levels of motivation.

Although the evidence is slimmer in humans, studies have shown that children can acquire preferences for higher-carb or higher-fat foods,[36][37] and given our affinity for foods with high salt and glutamate (umami) content, salt and glutamate are probably reinforcing as well. However, since food reward is a natural phenomenon, this doesn’t necessarily mean that these foods are problematic.

Who has “food addiction”?

The YFAS criteria have identified possible food addiction in the following:[38]

Why does it matter whether food addiction is recognized as a valid concept?

If food addiction is recognized as a valid concept, it would provide a rationale to expand medical support for the condition, potentially giving people better tools to identify and manage it. Recognition could also justify public health policy aimed at reducing the risk of food addiction, such as taxes on foods that are more likely to prompt addiction-like eating behavior, or restrictions on advertising such foods to children, analogous to the anti-smoking policy response that has led to a large decline in cigarette smoking rates.[39][40]

In other ways, it may not matter much. Medical treatment for disordered eating is already available, including for “food addiction” specifically, and for eating disorders that overlap substantially with “food addiction”.

In addition, regardless of whether food addiction is recognized as a valid concept, it remains true that some foods trigger strong cravings and eating drive,[8] and that many of us eat more of these foods than we’d like. Some people are affected by this more than others, and those who are most vulnerable have eating behaviors that share important features with drug addiction,[3] even if the analogy isn’t perfect.

In the modern affluent world, these foods are cheap and abundant. They can increase our calorie intake, decrease our diet quality, and contribute to lifelong unhealthy eating habits, whether we call them “addictive” or just “tasty”.

Can “food addiction” be treated?

You are now following Food addiction: is it real, and does that matter?. You will be notified when any significant update is made.

"Food addiction: is it real, and does that matter?," Examine.com, published on 28 February 2022, last updated on 11 March 2022, https://examine.com/nutrition/food-addiction-is-it-real-and-does-that-matter/