A meta-analysis was published in JAMA today, the abstract of which can be found here.

The paper starts off by noting the inconsistency of the literature both in regards to interventions and systemic reviews conducted, a concern I would like to echo in this blog post. Neither one study nor review should be seen as conclusive.

(Currently, the Examine Fish Oil page is somewhat lacking in regards to mortality and cardiovascular risk modulation and may not be an accurate appraisal of the literature on hand)

This meta-analysis started by considering all studies that were conducted in adult patients and that had both a control group and experimental group. Diet and supplemental interventions were allowed, but the trials must have lasted for longer than 1 year. Trials should have sought the eligible outcomes of "all-cause mortality, cardiac death, sudden death, MI, and all types of stroke". Pubmed, Cochrane, and EMBASE were searched up to August 2012, and data extraction was performed by two independent persons and quality of the studies and bias were assessed based on Cochrane policies.[1] Meta-Analysis considered the dose of the fish oil as a continuous variable, and outcomes were measured as a 'Relative Risk' and 'Absolute Risk Reduction'

Normally at this point I would mention something about 'not controlling for pre-existing disease states', but since fish oil is touted to help with the heart even in diseased states it may be an irrelevant point to be picky about. Even in the discussion the authors state that they wanted a wide breadth to avoid selective subgroup analysis seen in other meta-analysis. So in a way, the lack of micromanaging the subgroups makes this meta-analysis kind of unique and appreciated.

What I truly enjoyed about the methodology was the assessment for publication bias by making a funnel plot and assessing symmetry via a Begg-Mazumbar test.[2] This was to see if industry funding influenced the effects in any way and if there is a likelihood of suppressed results.

A collection of large scaled interventions lasting for more than one year were assessed, and the results pitted as a general "what is the risk for mortality or heart disease event in fish oil intervention relative to placebo". Publication bias was also taken into account.

As for the results, 3656 citations were found (speaks of the interest in Fish Oil), and 20 fit the criteria mentioned above. Overall, 68,640 persons were studied in these 20 studies and there were 7044 deaths, 3993 cardiac deaths, 1150 sudden deaths, 1837 Myocardial Infarctions, and 1490 strokes. It should be noted that this is a very high rate of adverse events, tallying at 22% of all participants. The populations studied appear to have been high-risk with the median age of participants being 68 and the range being 49-70; essentially an older and at-risk population was being evaluated.

Only two trials used diets, so for the most part omega-3 supplementation was used with the average dose of 1.51g daily (0.77g EPA, 0.60 DHA, 1.37g EPA+DHA); this is a relatively low dose of fish oil, however it has shown protective effects in some interventions before. That being said, only 10 studies exceeded a daily dose of 1g fish oil, and with the median EPA+DHA being 1.0g, a few superloading studies skewed the aforementioned averages a bit.

Below are Tables 2 and 3 from the study; I want to draw attention to Figure 3 as that seems to be where the conclusions are being drawn and it comprises the majority of the studies. 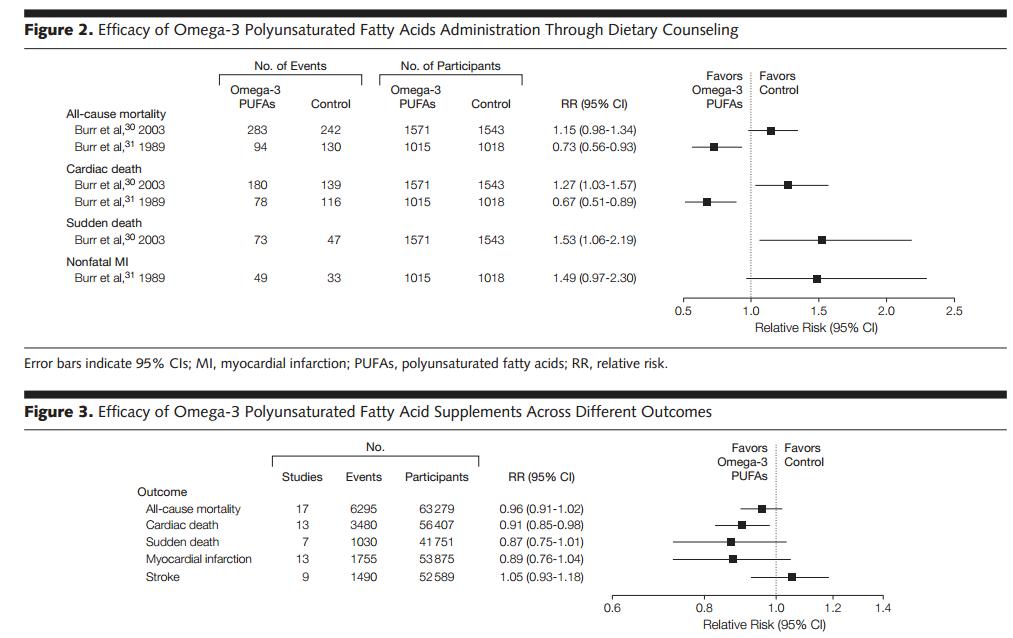 So on the five outcome parameters, one of them (cardiac death) was statistically significant and in favor of fish oil (note: if it crosses the vertical zero point - 1.0 on this graph - it is not statistically significant). Mortality, sudden death, and MI all trended towards fish oil but were not significant; this does show benefit with fish oil, but apparently in a high-risk population with low-moderate dose fish oil it doesn't appear to be that huge of a protective effect.

The relative risk of stroke trended in the opposite direction, so either the placebo exerted more of a protective effect than did the fish oil in these studies, or the fish oil was actually counterproductive (with the whole blood thinning thing, it is theoretically plausible)

When looking at the results of individual studies in regards to all-cause mortality, we get this: 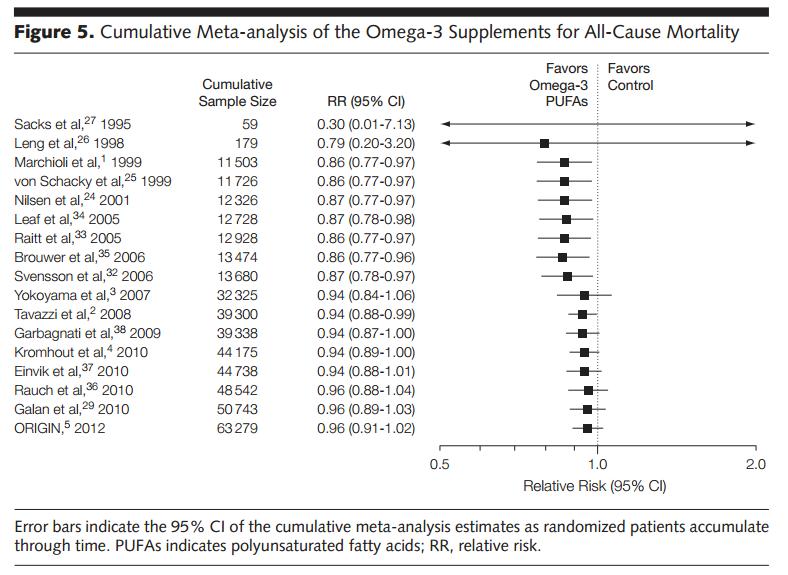 It is a cumulative reading, so work downwards. Basically the huge range seen (horizontal bar) and the degree of risk reduction (how far to the left of the center bar the black box is) are reduced when more and more studies are analyzed. Looking at the first study in isolation, the RR of 0.3 makes fish oil seem like an immortality drug, closer to the end, we get an RR of 0.96 (close to the 'true no effect' point of 1) that is no longer statistically significant like it was a bit earlier on.

Overall, this meta-analysis concludes that fish oil supplementation is not significantly associated with all cause mortality. These are valid conclusions from the analysis, but it should be noted a trend towards less mortality was observed as well as the statistically significant reduction of cardiac death

The trend towards increased strokes was less statistically sound than the aforementioned all-cause mortality and cardiac arrest, but should be noted as it is not seen as a desirable outcome

A quote from the authors in the discussion that I like is "The first quantitative synthesis in the field showed a strong, significant effect across all major cardiovascular outcomes. As more randomized evidence accumulated, the effect became weaker and nonsignificant and lost its universal aspect" with the magnitude and significance somewhat stabilizing over the last 5 years.

The authors finished by concluding their limitations, like usual. Notice was paid to how the two biggest studies performed were also open label and how the authors could not refute the notions of performance and detection bias in the field, as well as the very large European descent studies with the largest being of Asian descent.

Overall conclusions on this Meta-Analysis?

Overall conclusions summarized into one sentence?

Fish oil's protective effects on the heart appear to be less potent than once thought, although are still beneficial for heart health in high-risk populations. Conclusions on younger and healthy populations cannot be drawn from this meta-analysis. Any statements (derived from this meta-analysis) akin to "fish oil pills don't help" without specifically mentioning protective effects of the heart are merely sensationalism.

You are now following Fish oil and major cardiac events — a meta-analysis. You will be notified when any significant update is made.