Glutamine supplementation does not affect body composition, but it may accelerate strength recovery from resistance-training sessions and reduce the occurrence of infections in hard-training endurance athletes.

Glutamine is the most abundant amino acid in your body. Your body can synthesize it, so it is not an essential amino acid (EAA), but your requirements may at time outpace your rate of synthesis, making glutamine conditionally essential. Historically, however, glutamine has been considered conditionally essential only in the critically hurt or sick — burn victims and other people in whom physical stress is exceptionally high and catabolism (body-tissue breakdown) rampant.[1]

It is only recently that glutamine studies have started exploring the lesser stress and catabolism caused by strenuous exercise. Some of these studies examined the effect of glutamine on body composition, others on muscle recovery, and yet others on the immune system.

The benefits of glutamine in the critically hurt or sick have led some researchers to propose that it might be a useful supplement for athletes engaged in heavy exercise, which is also catabolic in nature.[2] These researchers tested their hypothesis through a double-blind RCT involving 6 resistance-trained men who consumed glutamine or glycine (0.3 grams per kilogram of body weight) one hour before a weightlifting session.[3] Glutamine did not benefit performance.

Another group of researchers tested glutamine (0.9 g/kg) against placebo in 31 resistance-trained men and women during a 6-week resistance-training program.[4] Even such a high daily dose of glutamine did not affect strength or lean-body mass (LBM) more than did placebo (strength and LBM increased in both groups).

Of course, neither study exposed its participants to the high levels of stress experienced by, for instance, burn victims. An RCT involving 18 collegiate male wrestlers aimed to address this issue by comparing placebo with glutamine (0.35 g/kg) during an intensive 12-day cut.[5] Both groups lost 2 kg, with no significant differences between groups with regard to changes in LBM or fat mass.

A 2018 meta-analysis of 5 studies also found no benefit from glutamine on body composition.[6] Although glutamine does play a part in muscle synthesis (it is an independent activator of mTOR[7]), what we obtain through foods seems to suffice; supplementation doesn’t appear to confer additional benefits.

Glutamine supplementation has no effect on lean mass or fat mass, even during aggressive dieting.

So glutamine supplementation has no effect on body composition; but might it facilitate recovery from resistance-training sessions?

To help answer that question, researchers gave placebo or glutamine (0.3 g/kg) to 15 recreationally active men right after a muscle-damaging exercise (100 drop-jumps) and for the next four days. They reported that, compared to placebo, glutamine significantly reduced muscle soreness and improved strength recovery.[8]

However, a study of 17 untrained young men reported that taking glutamine (0.1 g/kg) thrice a week for 4 weeks had no effect on muscle soreness, range of motion, or EMG activity up to 48 hours after a muscle-damaging exercise (eccentric leg extensions at 75% of 1-RM).[9] Importantly, this latter study involved untrained men and used a smaller dose, a different dosing schedule, and a different exercise protocol — all factors that could explain the discrepancy between the two studies.

A contraction is isometric when the muscle’s length does not change, and isotonic otherwise. An isotonic contraction is called concentric when the muscle shortens under load (as when you lift a dumbbell) and eccentric when it lengthens under load (as when you control the dumbbell on its way down). Your one-repetition maximum (1-RM) is the heaviest weight you can lift (concentric contraction) for a given exercise.

Most recently, a study of 23 resistance-trained men investigated the effects of taking glutamine with leucine.[10] The men were randomized into three groups and took either leucine (0.087 g/kg), leucine with glutamine (0.087 g/kg + 0.3 g/kg), or a placebo 30 minutes before and after a muscle-damaging exercise (100 drop-jumps), and again before and after recovery tests conducted 24, 48, and 72 hours afterward. Leucine led to better strength recovery at 72 hours only. Leucine with glutamine led to better strength recovery at 24, 48, and 72 hours. Muscle soreness, however, didn’t differ between groups.

Note that these three studies were conducted in men only. Another study recruited 8 men and 8 women, all recreationally active, and gave them placebo or glutamine (0.3 g/kg) one hour before and after a muscle-damaging exercise (80 eccentric contractions at 125% of 1-RM), and again before recovery tests conducted 24, 48, and 72 hours afterward.[11] Strength recovery was modestly improved in men but not in women, although both sexes experienced significant reductions in muscle soreness. 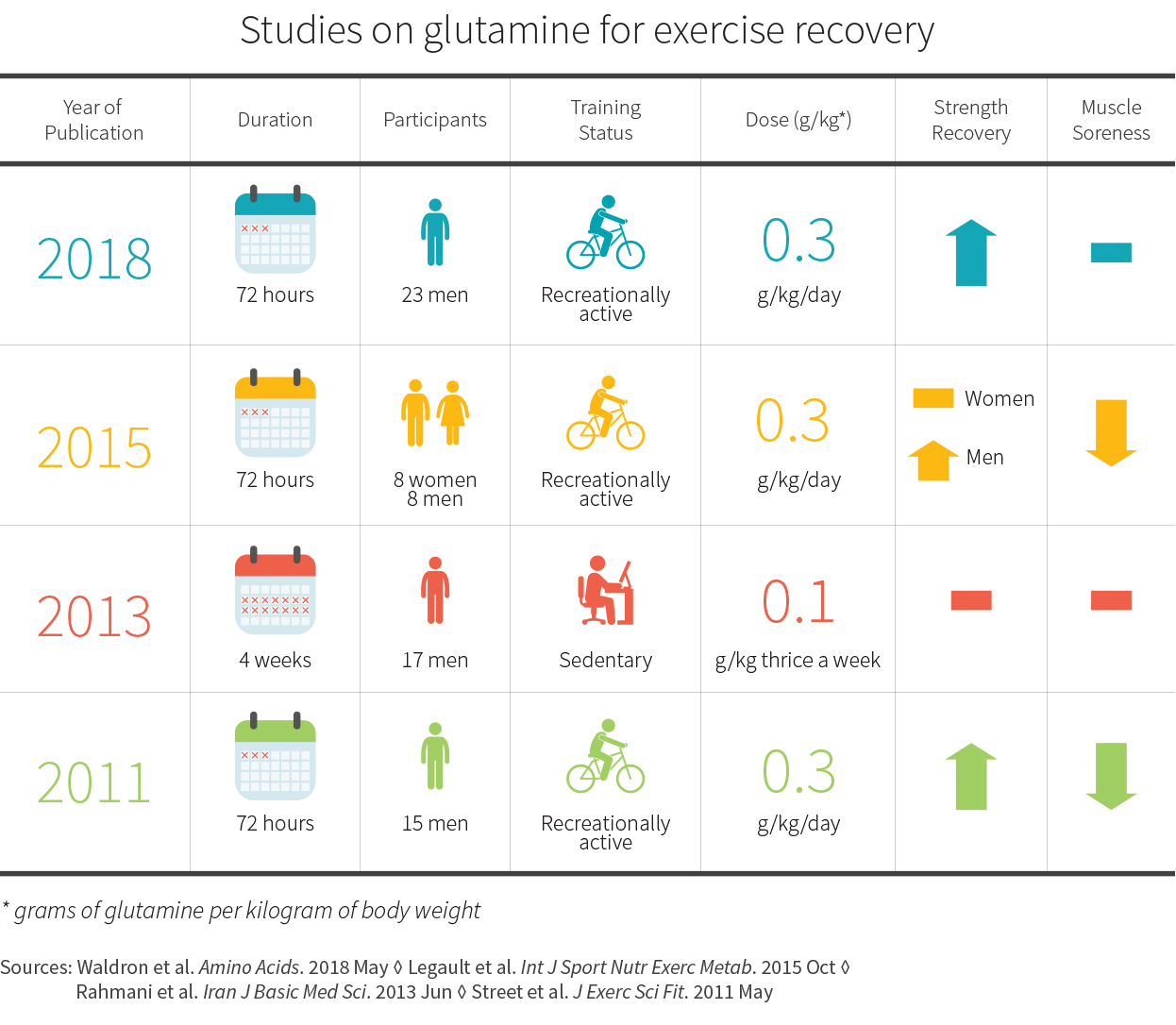 Glutamine is a major fuel for cells of the immune system.[12] Plasma glutamine levels are reduced after prolonged endurance exercise, and this reduction correlates with an increased risk of infection.[13]

An early study of endurance athletes (marathoners and ultra-marathoners) reported that taking 5 grams of glutamine right after an athletic event and 2 hours later significantly reduced the occurrence of infections over the following week.[14] Specifically, 19% of the glutamine group reported illness, compared to half of the placebo group.

No other trial has studied the effects of glutamine on infection as an outcome in athletes, but other trials have looked at various aspects of the immune system,[6] such as white-blood-cell function[15][16] and salivary IgA concentrations,[17] and none has found a relationship between an exercise-induced decrease in plasma glutamine levels and changes to the immune system.[18]

Glutamine’s benefits may be mediated by its effects on the intestinal barrier, as more recent evidence has begun to suggest. Prolonged endurance exercise is known to cause leaky gut — a condition in which heat stress and reduced blood flow to the gastrointestinal tract cause intestinal cell damage that loosens tight junctions between cells, allowing for the absorption of things that are not supposed to pass through the intestinal barrier.[19]

Glutamine is an important source of energy for intestinal cells and the immune system. Supplementation may reduce exercise-induced dysfunctions of the intestinal tract and might decrease the risk of falling sick from prolonged endurance exercise.

There is no evidence that supplemental glutamine helps build muscle or improve body composition.

There is evidence that supplemental glutamine improves strength-training recovery. It may also help maintain the integrity of the gastrointestinal tract during prolonged endurance exercise and thus decrease the risk of getting sick afterward.

So if your goal is to build muscle, don’t waste your money on glutamine. Other supplements are more likely to help, notably creatine, and of course you should ensure you get enough protein.

Our constantly updated Fitness Guide is a convenient all-in-one resource that tells you which supplements to take, when, and in what dosages, based on human studies.

You are now following Fact check: does glutamine build muscle?. You will be notified when any significant update is made.