Before we get into the evidence on daily weighing, you MUST understand the difference between these two questions:

Does weighing yourself each day help you lose weight?

Will weighing yourself each day help YOU lose weight?

This means the specific ‘you’, as in one living, breathing person who might be looking to bolster their weight loss efforts.

In order to answer these questions, let’s look at the latest randomized trials on weighing, deconstruct what the scale is actually showing you, and then apply the results to individual people.

Do weight changes on your scale translate to fat loss (or gain)?

On a day-to-day basis, your scale will NOT tell you about fat tissue changes, which are minimal during a short 24-hour time scale. It will tell you about four things: your pooping (ahem … bowel movements), your peeing (ahem … micturation), carb intake (reflected in glycogen storage), and blood volume (influenced by salt intake). Blood volume won’t vary that much, unless you’re an MMA fighter cutting weight, so let’s focus on the other factors.

The mass of different people’s poop and your pee can vary tremendously, and hence impact your scale weight. In fact the daily mass of poop can vary from around 15 grams to around 1.5 kg (0.03 pounds to 3.3 pounds … which is a scary large amount of poop) between different people. Heavy people have heavier poop, because they eat more, and fiber can also have a major impact on poop weight.

Urine output is also quite variable, ranging from around 0.6 kg to 2.6 kg (1.3 pounds to 5.7 pounds) when at least somewhat hydrated.

There’s a good reason for the standard recommendation to weigh yourself after waking up and going to the bathroom: fecal weight and urinary output can have large impacts on day-to-day weight variation.

But glycogen storage is probably the main difference maker. Poop and pee won’t differ too much within one individual from day to day, but if you eat low-carb for around three days, your glycogen levels can go down by two-thirds. Which can really affect body weight, because glycogen can make up around 5-10% of the weight of your liver, and 2% of the weight of your muscles. And as you can see below, most of our body weight comes from muscle and organs. 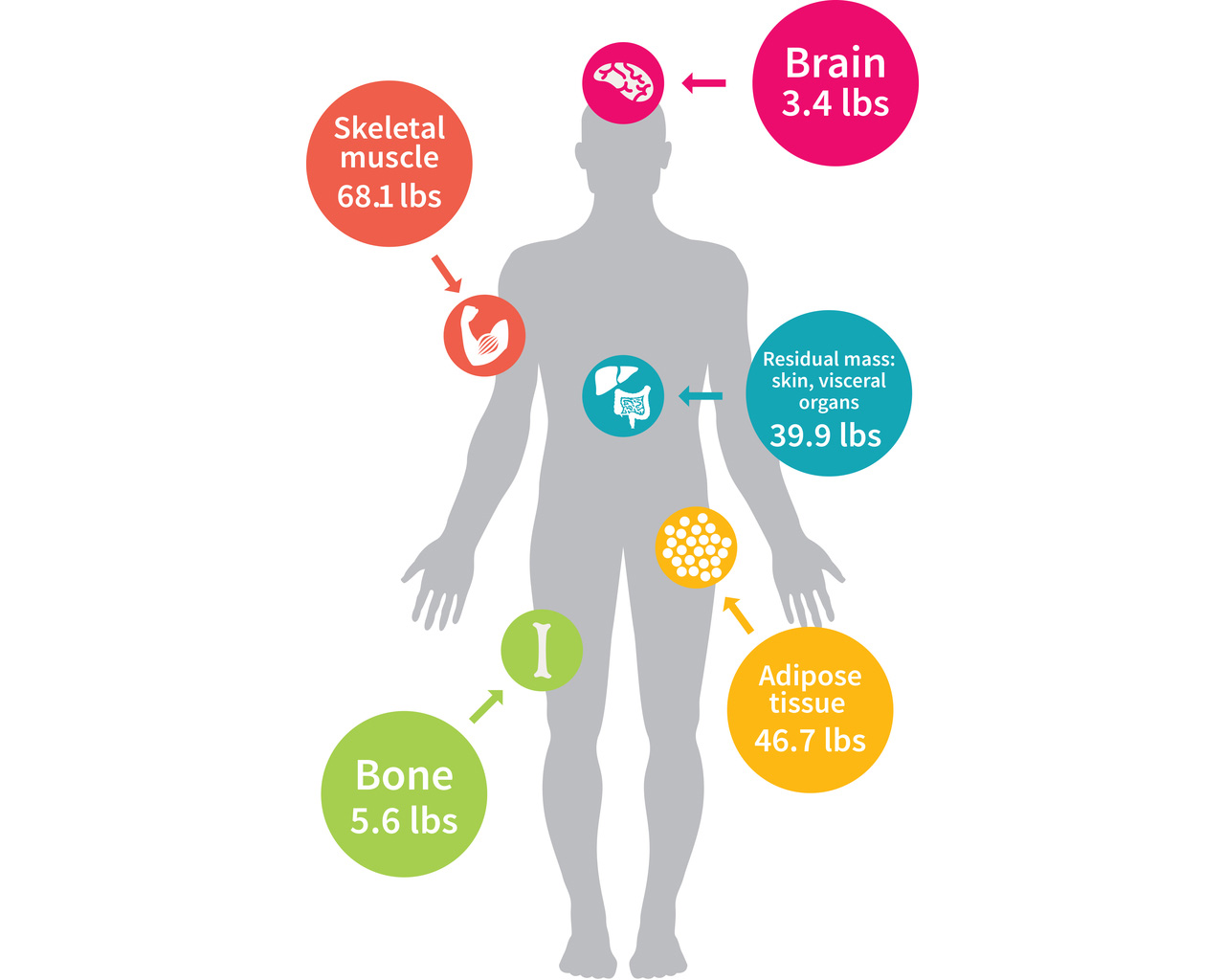 Since the average person stores around 500 grams of combined glycogen in their muscles and liver (although that can get to over 1000 grams in some people), and glycogen is bound to water (which increases the weight by quite a bit), daily carb intake can have huge impacts on your scale weight.

If you magically gained or lost a pound or two in the last 24 hours, it’s not at all indicative of bodyfat changes or a broken scale: it’s just the combined effect of glycogen, poop, and pee.

What do daily weighing studies show?

Hooray for Wi-Fi scales! Before them, older studies involved people self-recording their weights, or coming into study centers each and every morning. Plus many of these were just observational, rather than randomized trials. Not so great for accuracy or adherence.

So let’s focus on a recent wifi scale trial that was randomized and controlled. The appropriately-named WEIGH trial had pretty fantastic results:

Older research (before 2014 or so) isn’t as applicable as newer research, and newer research shows a huge average weight loss over six months, of around 13 pounds. If this effect was found from a pill, it would probably be the best-selling pill of all time.

If only that was the end of the story, then we could just recommend daily weighing to everyone and the obesity crisis would be solved and we would gladly accept a Nobel prize for this blog post.

Except there are major caveats when applying this research to actual practice.

When you weigh yourself daily, and are losing weight steadily, you may find yourself singing “Everything is awesome!” under your breath. But if someone happens to overeat on a given day, they’re less likely to weigh themselves the next day. Which means that if you’re not enrolled in a clinical trial, and the pressure is much, much lower to stick to a protocol, all bets might be off when it comes to results.

The second main problem is that people get jaded over time. The first time you hear about a cool approach to health improvement (mindfulness! calorie tracking! sleep tracking!), you may have a great month or two of sticking to your health habits. And then once life gets in the way, you start sticking to them less often. Eventually, you may even view those habits in a slightly negative light. “Daily weighing? That was so 2016, and I don’t think it really worked anyway for the long term.” This has been verified in a study on frequent weighing, showing much lessened effects a year and a half after the study started.

The third main problem is that some people may have negative psychological side effects from daily weighing (such as disordered eating or lowered self-esteem), and it’s really hard to know who’s at risk. There have actually been over twenty studies to date on self-weighing and psychological effects, but the conclusions are mixed. It seems that females and younger people may be at higher risk for negative psychological effects, and overweight people seeking weight loss treatment may be at lower risk. Most of the data is observational in nature though, making this data not so actionable.

Not everyone responds to daily weighing the same, and variability can be very high. Some people will adhere much better to a healthy diet if there’s a scale holding them accountable. Some may experience great weight loss for a few weeks, then get frustrated during weight loss plateaus or actually gain weight. Others may even experience side effects, such as letting the scale weight determine their self worth, developing disordered eating, etc.

The bottom line is that you really have to try self-weighing yourself to see how it affects you, and give it a good run of at least a few weeks in a row. The best controlled study thus far showed amazing results (13 pounds of weight loss over six months), and self-weighing might have a greater impact than most any other discrete habit. So if you have a hard time adhering to a healthy eating plan, do consider daily weighing, as it shows better results than most any intervention.

Also, Wi-Fi scales make it super easy to track your body weight, taking only seconds a day. You no longer have to write anything down, and can see your progress over time with just the click of a button. Weighing isn’t at all necessary for weight loss (and in fact, some people do better with things like measuring waist circumference, taking pictures, or not tracking anything at all), but it’s certainly very helpful for some people, as studies have shown pretty clearly.

You are now following Does daily weighing help you lose weight?. You will be notified when any significant update is made.

"Does daily weighing help you lose weight?," Examine.com, published on 11 May 2017, last updated on 10 March 2020, https://examine.com/nutrition/does-daily-weighing-help-you-lose-weight/