APRIL FOOLS: We have a new course: master the skills we use every day

Examine.com has a new, enchanting perspective on nutrition and supplementation, and a magical course that will teach you all our deepest secrets.

Examine.com turned 8 last month, and the past year has been our best yet; we have new articles, a new guide, a new look, and a brand new outlook on what we do. This new outlook started to take hold around a year ago when we reported on a promising new supplement made from potent hand-picked cherries.

We were blown away by the incredible research. The entire Examine.com team decided to try this supplement, and the results have been truly astounding. We experienced mood-enhancing benefits and a remarkable increase in our productivity, with our research and analyses taking less than 10% of the time they usually do!

But that was only the tip of the iceberg.

One night, while editing blog posts under the energizing influence of three bottles of FactShield™, our chosen cherry extract, our glorious leader Kamal was contacted by a strange, barefoot man wearing blue robes. The man said he had watched from afar for some time, seen Kamal’s growing mastery of cherry-picking, and wished to teach him a new type of woocraft: arcane hand-waving.

Kamal was transported to a large castle where he learned magical secrets from a cabal of powerful wizards. When he returned, a few minutes later, he shared those secrets with the rest of us. We became nutrition wizards, tasked with battling the Dark One, who doesn’t want YOU to know the TRUTH, and his army of well-funded minions: The Ones Who Disagree!

As you can see, Kamal became a bona fide wizard: 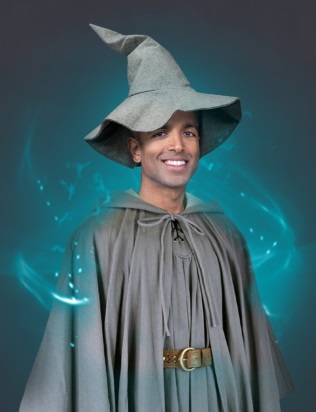 For the last few months, we have been secretly dabbling in magical wisdom and spells, applying them to nutrition. Now, in order to educate the unwashed masses and help fight the Dark One, we have decided to share our Knowledge with all of our readers. What’s most remarkable is that learning to be a health wizard doesn’t take years at a freaky, monster-ridden boarding school; it’s possible to learn all you need in a two-week online course!

Introducing: The Examine.com School of Woocraft and Wizardry.

Why should I take this course?

Because of the flashy title, and if that really isn’t enough for you, because our new course will give you the power to:

The following is a sample of the spells Woocraft students will learn to cast:

“I used to spend three hours or more at the gym every day to stay jacked, but ever since I took this course, I’ve been gaining twice as much muscle just loafing on my couch watching TV. They even sent friendly gnomes to deliver mysterious pills to my door! Would recommend to everyone, just be sure to stock up on acne cream.” — Brobeus, The Massive

“Ever since I flunked out of medical school, I’ve been struggling to sell enough herbal supplements to afford a second yacht. But now, thanks to your course, I have an impressive army of zombie underlings selling thousands of bottles a week for me, especially the ones I claim heal bite wounds.” — Greedious, The Foul

“Being beautiful and helping people unlock their inner energy through expensive products is thankless work; I have so many social media haters telling me there’s no proof that my eyeball gel does anything except burn terribly. I sure showed them by telling them how unenlightened they are and flaunting my wealth. They’re poor, and no amount of science in the world will change that.” — Gwynarth, The Vain

“Researchers in the biomedical research field tend to slave away at the bench, repeating experiments countless times just to generate ‘statistically significant’ data. Publish or perish, they say. Well, I played that game for longer than I would like to admit. Exhausted, addicted to caffeine, and having the same nightmare about a null hypothesis over and over again, I knew I needed a change. After taking this course, my eyes have been opened to a new world of research-publishing possibilities. Using the advanced ad hoc adjusting techniques I learned, I quickly earned a doctorate in data conjuration. What’s more, my hypothesis is always correct and my recent work has been sailing through peer review in predatory journals. Thank you, Examine.com!” — Laboratorium Simia Fabricatus, The Investigator

With gleaming recommendations like that, why wait? Sign up for the course today and we’ll throw in a bottle of FactShield™ cherry extract to heighten your connection to the Woosource.

You are now following APRIL FOOLS: We have a new course: master the skills we use every day. You will be notified when any significant update is made.

"APRIL FOOLS: We have a new course: master the skills we use every day," Examine.com, published on 29 March 2019, last updated on 27 September 2021, https://examine.com/nutrition/2019-enchanting-course/