NERD Mini: Predicting the route of the regain train

You are reading a free open article from our Examine Membership. Become an Examine Member to get full access and to stay on top of the latest research.

Obesity—defined as having a BMI of 30 or greater—is associated with a myriad of negative health consequences[1], including cardiovascular disease, hypertension, type 2 diabetes, cancer, sleep issues, arthritis, hormonal disruption, and reduced quality of life. Obesity prevalence has increased by almost 30% in adults and almost 50% in children over the last three decades and it is now a leading cause of disease worldwide.

The solution for obesity doesn’t have to involve pharmaceuticals or medical equipment. In fact, a reduction of bodyweight of 5–10% is associated with considerable improvement in overall health, even if the weight loss doesn’t bring BMI below 30[2]. The crux of the issue, however, is that the weight loss itself is not the vital factor per se, but rather weight loss followed by weight maintenance. The general sentiment (which was established from the results of a 1959 study[3]) is that avoiding weight regain is virtually impossible, but more recent evidence shows that, while difficult, it certainly can be done. In fact, up to 20% of people who lost 10% or more of their bodyweight are able to maintain that weight loss one year later[2]. What is different about their behavior compared to people who do not succeed in keeping the weight off?

This study[4] was a secondary analysis of a randomized controlled trial that investigated the effect of improved communication with healthcare providers and health coaching on the maintenance of weight loss in adults over a 24-month period. Although the original study involved a treatment arm and a control arm, this study combined both groups as if it was a retrospective cohort study. The average age of the participants was 53, 76% of the participants were women, 88% were white, and 76% had at least a college degree.

The original study gathered data on a number of dietary and lifestyle factors, so the researchers first examined the effect of one factor at a time. Then, if a factor was found to be effective on its own, it was included in another analysis that took all the effective variables into account all at once. After both 6 and 24 months, an increase in eating at restaurants and a decrease in physical activity and fish consumption were associated with weight regain. Additionally, increased sedentary behavior (evaluated by a questionnaire) was associated with regain at six months and reduced low fat food consumption and increased sugary beverage and dessert consumption were associated with regain at 24 months. 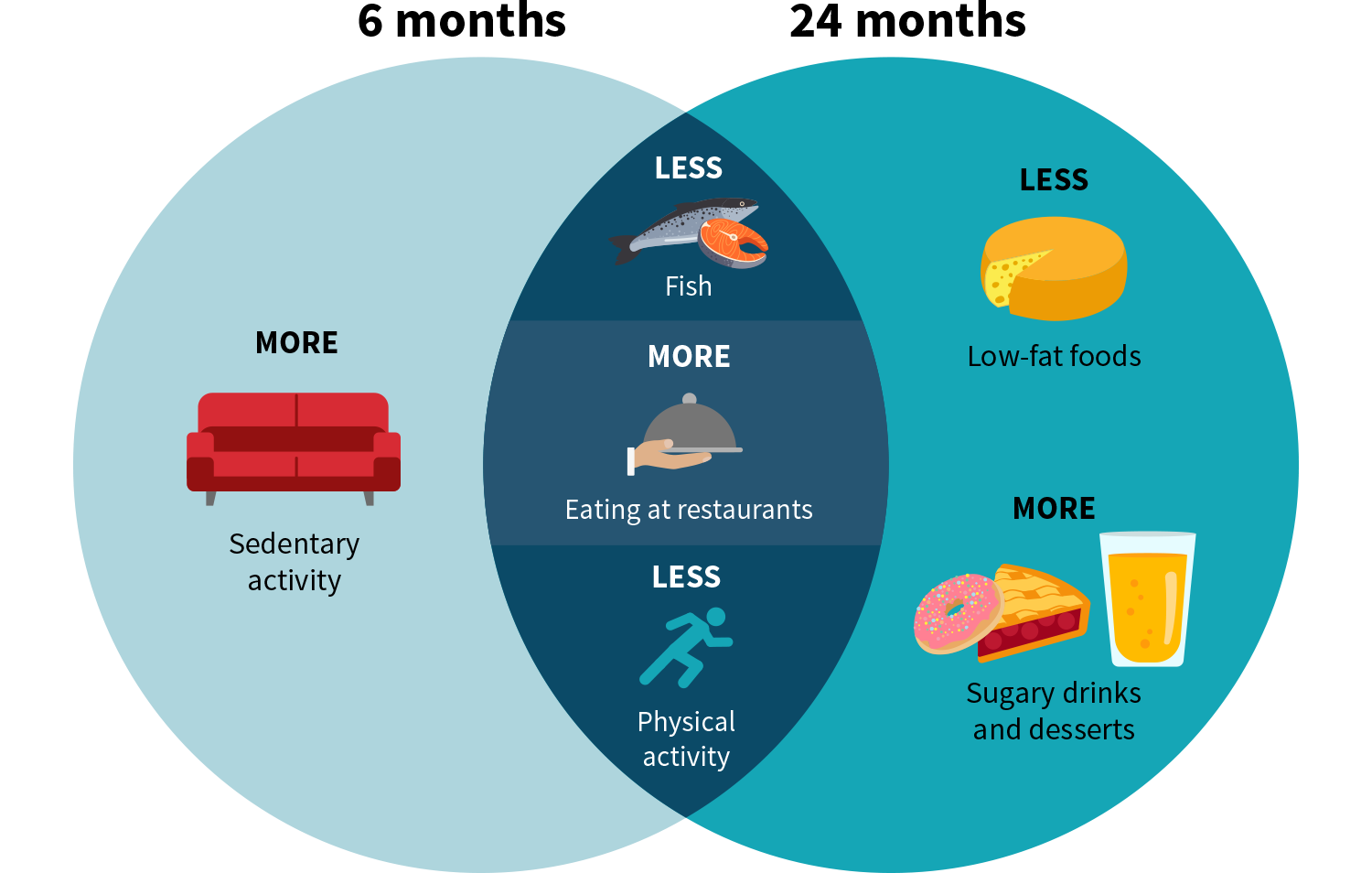 There are two important things to keep in mind when interpreting these findings. While this study is based on a randomized controlled trial, it’s a secondary analysis, so no strong claims about causality can be made. These factors can only be said to predict, or to be correlated with, weight regain. In addition, make sure not to miss the broader context by focusing too much on the details. For example, while reduced fish intake is associated with weight regain, this association may not reveal the true relationship between these factors. It’s quite likely that fish intake is indicative of participants regressing to old, sub-optimal eating habits involving lower quality, more calorically dense food. Similarly, time spent being sedentary means less exercise, but also may also involve mindless eating—a major risk for weight gain.

A second limitation to keep in mind is that a number of factors were evaluated using questionnaires, which are subject to bias due to people naturally having difficulty recalling behaviors or modifying their answers to something more socially acceptable (e.g., “I’ve been going to restaurants a bit too much” as opposed to “I’ve been ransacking the all-you-can-eat buffet after a night out”). This is why it’s useful to think about the implication of these results, as opposed to the specific behaviors.

Finally, it’s important to keep in mind who the study participants were, on average: the population was mostly made up of middle-aged white women with college degrees. While the findings are consistent with the literature overall[5], it’s still important to be wary of unwarranted extrapolation.

You are reading a free open article from Examine Membership. Become a subscriber to get full access and to stay on top of the latest research.