Keto diets can reduce appetite, thereby facilitating fat loss for strength and power athletes. However, they appear to be inferior to balanced diets for building muscle mass and strength.

Ketogenic diets limit carb intake (generally to <50 grams/day or <10% of caloric intake) to induce ketosis. When in ketosis, your body uses ketone bodies (acetone, acetoacetate, and β-hydroxybutyrate) instead of carbs to fuel cells, including muscle cells.

You are in ketosis (also known medically as hyperketonemia) when your blood levels of ketones are high. How high?

Under normal, mixed-diet conditions, you usually have up to 0.1 millimoles of ketones per liter of blood (≤0.1 mmol/L). A state of ketosis is generally defined as >0.2 mmol/L,[1] but most studies use ≥0.5 mmol/L as their practical threshold.

Nutritional ketosis is a kind of “low level” ketosis (0.2–3.0 mmol/L, typically) anyone can reach through carb restriction. This kind of ketosis shouldn’t be confused with ketoacidosis, a life-threatening condition characterized by elevated blood ketones, elevated blood glucose, and marked changes to the blood pH. Ketoacidosis is mostly seen in some cases of diabetes[2] and alcoholism,[3] and a handful of case reports have associated it with hyperthyroidism, starvation, and lactation.[4]

This was a narrative review of 9 randomized controlled trials (RCTs) totaling 188 healthy, trained people. It summarized the evidence on the effects of keto diets (>2 weeks long, with <10% of calories from carbs or <50 grams of carbs per day) on body composition (body weight, fat mass, muscle mass) and various measures of strength or power.

With regard to body composition, the authors of the present review start by presenting evidence of keto diets promoting weight loss in the general population via appetite suppression (caused by ketosis and an increase in protein intake) and glycogen depletion. Then, they mention a 2021 meta-analysis that found that keto diets reduced body weight, fat mass, and fat-free mass (FFM) more than other diets. This meta-analysis found that keto diets caused greater fat loss than FFM loss (−2.21 vs. −1.26 kg),[5] and as we explain in the “Fat-free mass ≠ muscle mass” box below, FFM loss on a keto diet can be a loss of glycogen and water rather than muscle.

While many publications (including the present review) assume that a gain or loss of fat-free mass (FFM) is a gain or loss of muscle mass, FFM actually includes everything that isn’t fat — so your muscles, yes, but also your bones and other organs, your glycogen, and your body water.

As to why keto diets might impair muscle growth, the authors proposed a few hypotheses, notably these three: 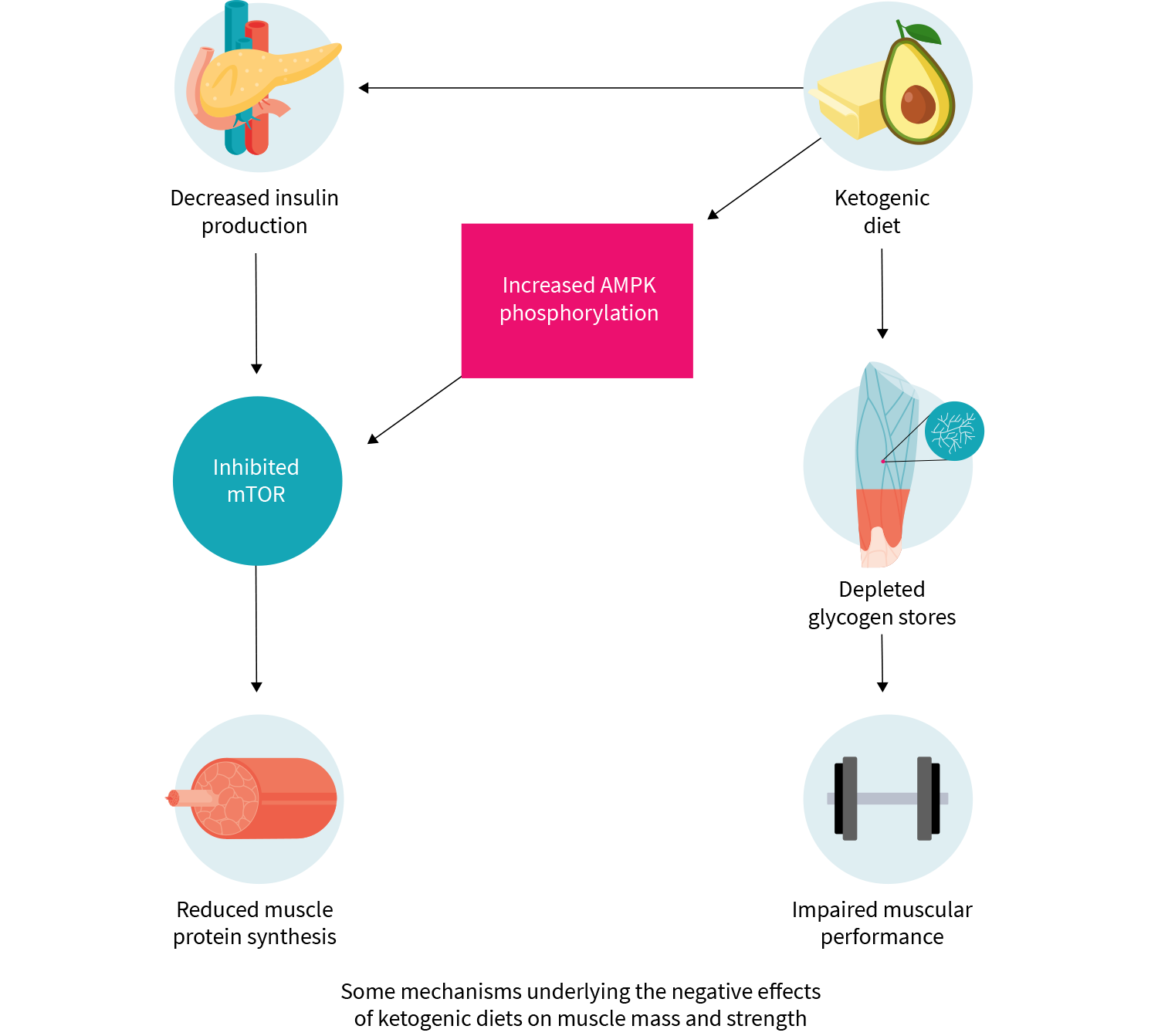 Of the 9 RCTs in the present review, 7 assessed the effects of keto diets on strength or power in strength-trained individuals. Of these 7 RCTs, 6 matched caloric intake between the keto diet and the control diet, and 1 let its participants eat ad libitum. In 3 RCTs, the keto group improved less than the control group; in the 4 other RCTs (one of which let its participants eat ad libitum), both groups improved similarly.

The findings of the present review suggest that, while keto diets might promote fat loss in strength and power athletes, they have a neutral or negative effect on muscle mass and performance.

There are 10 more summaries in the Editor's Picks category for November 2021 including ...