This systematic review found that supplementation with protein or amino acids reduced postexercise inflammation or oxidative stress in some (but not most) studies. This inconsistency may be due to study heterogeneity, insufficient sensitivity (biomarker assessment), or insufficient power (study controls and analysis).

Inflammation and reactive oxygen species (ROS) are necessary and important modes of signaling for muscle adaptation and regeneration, but they can also cause damage if left unchecked. Proper protein intake is crucial for recovery from exercise, and some animal studies suggest that protein has antioxidant and anti-inflammatory effects. Can it affect postexercise inflammation and oxidative stress in humans?

🔍Digging Deeper: The balancing act of ROS and inflammatory signaling in muscle adaptation

Skeletal muscle generates ROS at rest, primarily from mitochondrial inefficiencies during energy metabolism. The neural and physical stress of muscle contraction during exercise, as well as the increased energy and oxygen demand, increase ROS production substantially, primarily from reduced nicotinamide adenine dinucleotide phosphate (NADPH) oxidase, an enzyme that mediates cell signaling and regulation of gene expression through the production of ROS.[1] Increased ROS levels alter the potential for the transfer of electrons between molecules (often referred to as redox potential) in muscles and can modify redox-sensitive proteins. If modified, redox-sensitive signaling pathways (e.g., nuclear factor erythroid 2-related factor 2, or nrf2) can activate various physiological responses/adaptations through regulation of gene expression (e.g., mitochondrial biogenesis via antioxidant response element activation).[2] Ideally, the exercise stress is enough to trigger an adaptive response (i.e., oxidative eustress) that promotes physiological changes, such as increasing mitochondria numbers to improve aerobic capacity, to prepare the body’s response to another period of exercise stress in the future without purportedly causing too much damage that may prevent proper recovery. This damage could lead to overtraining and oxidative distress, although there are likely other factors involved.[3][4][5]

At the same time, the increase in ROS and regulation of gene expression can signal the immune response of inflammation. While some factors may exert pro- or anti-inflammatory action, they generally signal muscle stress and damage and recruit a scavenger and recovery response to eliminate damaged cells and repair tissues.[6][7] ROS and inflammation can interact in a vicious cycle, depending on other stressors beyond exercise (e.g., smoking, disease, and aging), but within tolerable stress levels, ROS and inflammation serve as important signals for adaptation. 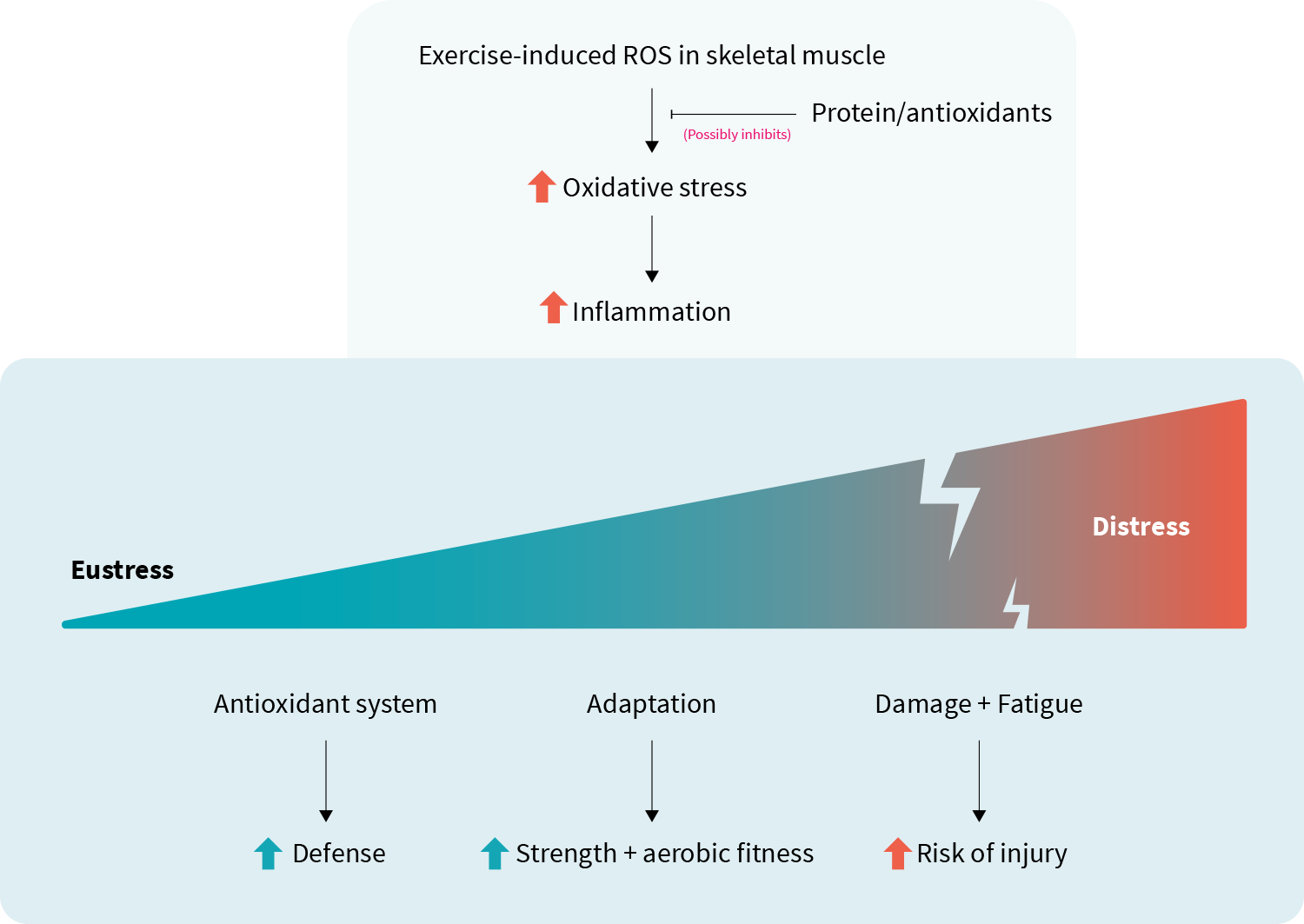 These results should be interpreted with caution for the following reasons:

Protein’s purported antioxidant effects are partially explained by its ability to enhance the availability of glutathione, a cofactor involved in the endogenous antioxidant response. It has also been shown to dampen inflammatory signaling, but the reports fueling these purported effects are primarily from animal and cell studies.[11][12] One human study that reported an antioxidant benefit involved a special carbohydrate and whey protein cake. In this case, not only does the combination with carbohydrate make it difficult to determine whether benefits were derived from the protein, carbohydrate, or both, but the participants also underwent “exhaustive cycling.”[13] There may be more nuance to this relationship, such as the existence of an effect only following excess high-intensity exercise (or overtraining) that may trigger a high level of oxidative stress and oxidative distress.

While novel, more precise tools are being developed to allow for a greater understanding of redox signaling and intricate cell communication, it appears that more research is needed to understand the subtlety in the relationship between exercise-induced ROS, adaptation, and protein supplementation. Since most of the underlying mechanisms involved in these relationships have been explored in animal models (some have yet to be proven) and studies are limited by various aspects of intervention (e.g., exercise duration, type, intensity), sample type (i.e., systemic vs. localized), measurement methods, and sensitivity (e.g., differences in hydration are not always monitored but can influence concentrations of analytes), the specifics are still being teased out.[2] [6][10] Alternatively, the null result may very well suggest that exercise-induced oxidative stress and inflammation are an important stimulus for muscle adaptation.

There are 8 more summaries in the Editor's Picks category for May 2022 including ...