Step it up: Can you walk your way to a longer life?

This meta-analysis of seven cohort studies found a strong inverse association between steps per day and all-cause mortality, with a linear reduction in risk from 2,700 to 17,000 steps per day.

Physical activity is a key component of health promotion recommendations. The World Health Organization recommends that adults perform at least 150–300 minutes of moderate-intensity aerobic activity or at least 75–150 minutes of vigorous-intensity aerobic activity per week. Although there are many types of physical activity, walking is a core feature of many exercise programs because it’s free, requires no special training, and can be practiced almost anywhere. It’s commonly accepted that 10,000 steps per day is a good goal, but there is limited scientific evidence to support this recommendation. So, what is the optimal number of steps per day for health promotion?

This meta-analysis of seven prospective cohort studies published after 2015 investigated the association between daily step count and all-cause mortality risk in 28,141 participants (average age range of 57–78) over 175,370 total person-years. Three studies had a follow-up duration of less than 5 years, one had 9 years, and the other three had 10 years. Additionally, six studies measured daily step count on seven consecutive days. All of the studies adjusted the results for body mass index, while six adjusted for age, alcohol intake, smoking status, and pre-existing comorbidities. 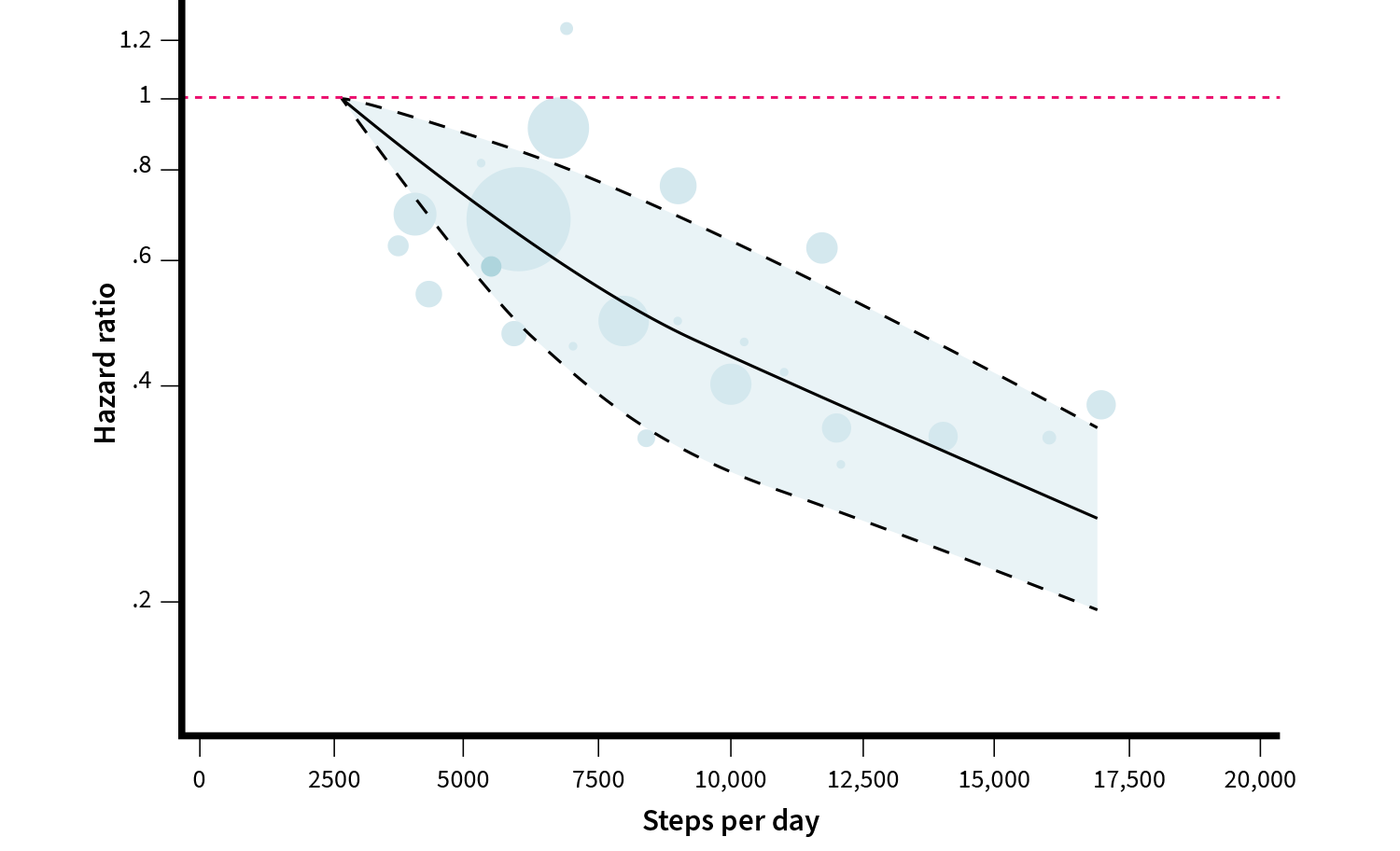 The dashed lines represent the upper and lower bounds of the 95% confidence interval of the hazard ratio of all-cause mortality. This means that, if we were to construct 95% confidence intervals from samples of the population this study aims to represent, the "true" effect should lie within those intervals in 95% of those cases. The circles represent the hazard ratio for steps per day categories from each study, and the circle size indicates how much the data varied within the study — the smaller the circle, the less variation.

Since this was a meta-analysis of observational studies, the results were likely affected by residual confounding. For instance, a lower daily step count may reflect poor health status and a higher presence of comorbidities. Although six studies controlled for baseline comorbidities, these confounding effects cannot be completely controlled by statistical methods.

Due to the lower number of relevant participants, the results for 16,000 steps per day and beyond should be interpreted with caution.

There are plenty of good reasons to get your daily step count up: 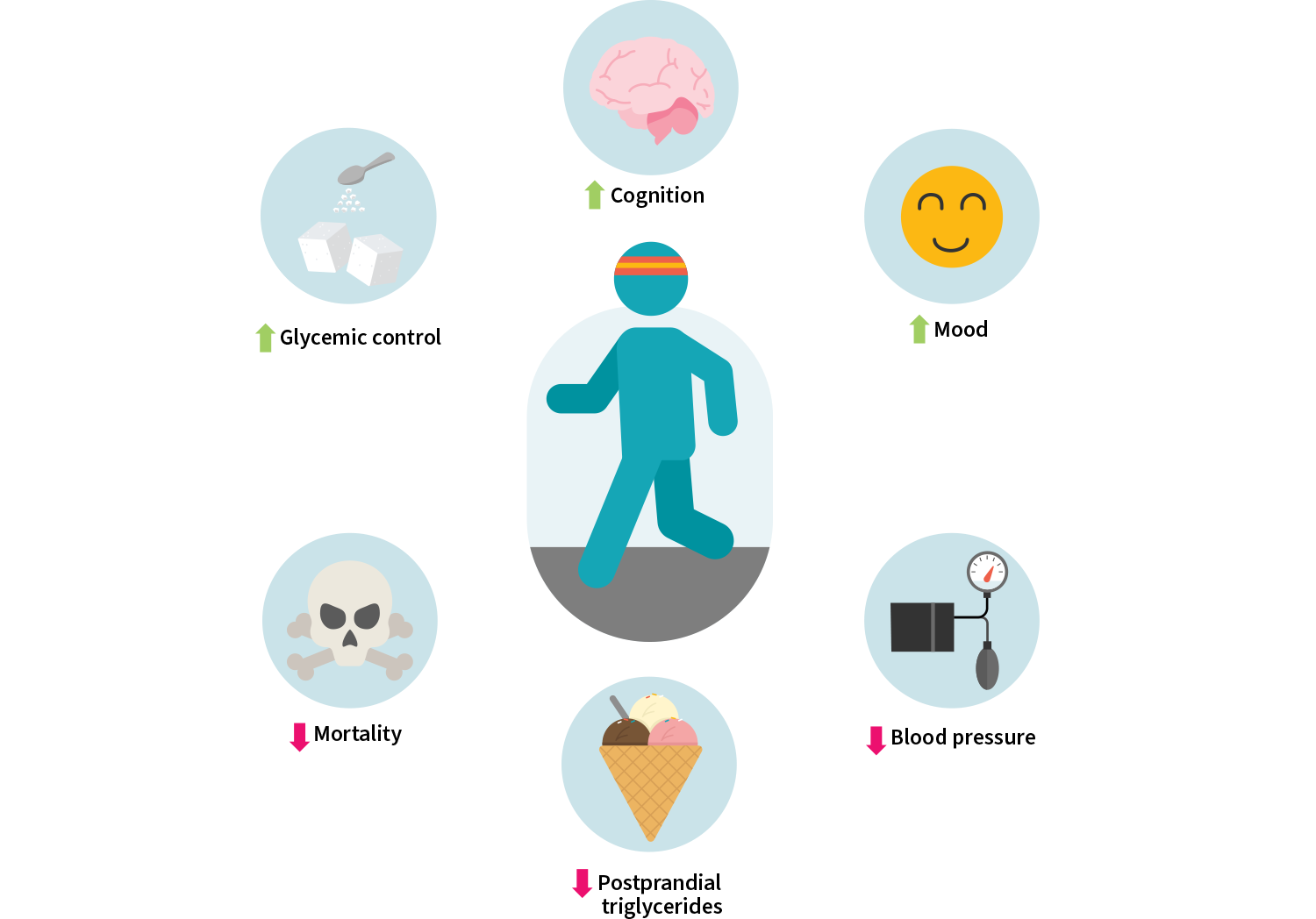 To add further fuel to the motivational fire, increasing daily steps can significantly reduce the risk of cardiovascular disease (CVD) and type 2 diabetes (T2D), which are two of the most prevalent and deadly diseases worldwide.

However, the biggest and best reason for getting up and moving around more has to do with mortality. The present study was notable because it quantitatively synthesized the available evidence on daily step count and all-cause mortality, which had only been done by one other study, published in December 2021.[7]

Interestingly, accelerometer-measured step intensity, which is often measured as peak 30-minute or 1-minute cadence during the day, is not associated with all-cause mortality after adjustment for daily step count.[11][12][13] This is interesting because total steps per day are highly correlated with step intensity.

These findings suggest that daily step count is more important than step intensity for health promotion, but due to a limited number of available studies, further research is needed to strengthen confidence in this association. At any rate, start stepping!

There are 9 more summaries in the Editor's Picks category for March 2022 including ...