People with overweight who routinely slept less than 6.5 hours per night ate about 150 kcal less per day when they slept 1.2 hours more per night (on average).

Observational research suggests that short sleep duration is an important risk factor for obesity. Previous research has linked each hour of sleep reduction, relative to 7 hours of sleep, to a 9% increase in obesity risk.[1] One potential explanation for this association is that sleep restriction may lead to a higher energy intake. Indeed, according to a 2021 meta-analysis, restricting sleep to no more than 5 hours per night resulted in an average increase in energy intake of around 200 calories per day.[2] That said, it remains unknown if, and to what extent, increasing sleep duration in a real-life setting reduces energy intake in people with overweight. The trial summarized here examined this possibility.

In this 2-week randomized controlled trial, 80 men and women ages 21–40 with a BMI between 25 and 29.9 (i.e., overweight) and habitual sleep duration of less than 6.5 hours per night were randomized to one of two groups:

The participants in both groups were asked to continue their daily routine without any prescribed diet or physical activity. The researchers continuously monitored the participants’ sleep-wake patterns at home using wrist actigraphy.

The primary outcome was energy intake, which was calculated from the sum of total energy expenditure (measured using the doubly labeled water method, which involves tracking the excretion of hydrogen and oxygen isotopes from the body over time) and change in body energy stores (calculated from changes in body weight and body composition measured with dual-energy X-ray absorptiometry). Other outcomes of interest were body weight and body composition.

🔍 Digging Deeper: Why care about preregistration?

Preregistering a study forces researchers to clearly think through the ins and outs of their study design beforehand, and also helps reduce their ability to fish for a changed primary outcome after the data are collected, since any deviations from the preplanned protocol are public.

The findings of the study summarized here are supported by the results of a 2019 meta-analysis, which found that healthy individuals consumed an average of 253 calories more in a single meal during short-term sleep restriction of up to 14 days, compared to when they slept normally.[3] The meta-analysis also found that sleep restriction resulted in an increase in body weight of 0.34 kilograms. However, keep in mind that the study under review did not explore the effects of sleep restriction, but, rather, of sleep extension.

Several potential explanations have been proposed for the reduced sleep–obesity link, some of which relate to how sleep may affect energy intake.

The first potential explanation is that short sleep duration may stimulate hunger through its effects on appetite-regulating hormones, and thus lead to higher energy intake. Specifically, short sleep duration may decrease the levels of leptin, a hormone that suppresses appetite, and increase the levels of ghrelin, a hormone that stimulates hunger. However, even though sleep restriction has previously been reported to increase subjective hunger levels,[3] its purported effects on the levels of leptin and ghrelin have not been confirmed in meta-analyses.[3][4] That said, it’s worth noting that hormones other than leptin and ghrelin, such as peptide YY, cholecystokinin, and glucagon-like peptide-1, are involved in appetite and hunger regulation and could play a role in the link between sleep and hunger.

The second potential explanation for the sleep–obesity link is that reduced sleep duration enhances the activity in neuronal centers of the brain associated with pleasure and reward, thereby promoting the consumption of “unhealthy,” energy-dense foods.[5][6] On the other hand, sleep extension may reduce the desire for such foods, ultimately leading to a reduction in energy intake.[7]

One more possible explanation is that more time awake provides more opportunity to eat. This means that more time spent in bed and/or sleeping reduces available time to eat, resulting in a reduction in energy intake. 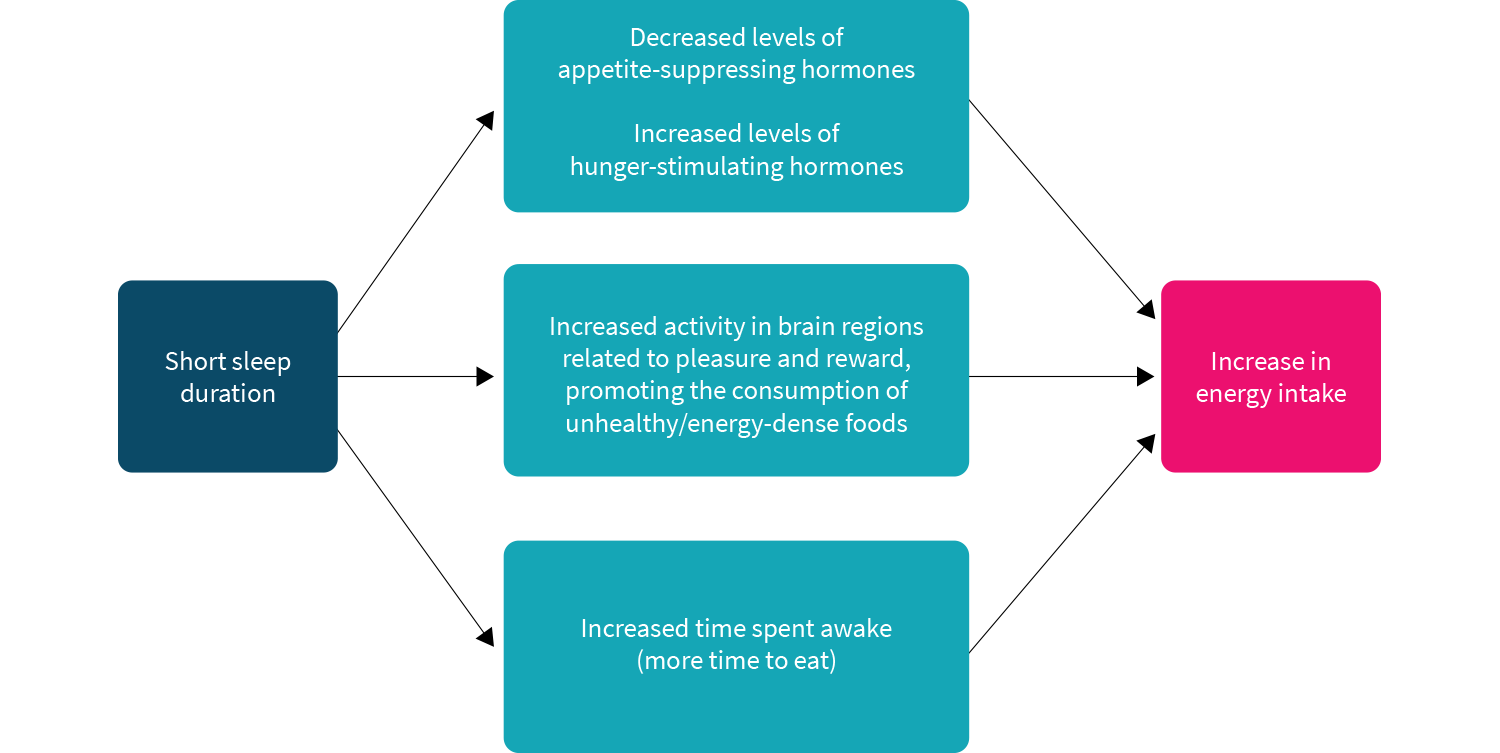 There are 9 more summaries in the Editor's Picks category for March 2022 including ...