Three kinds of intermittent fasting — time-restricted eating, alternate-day fasting, and a 5:2 diet — promoted mild-to-moderate weight loss (3–8%) over 8–12 weeks, which is on par with traditional caloric restriction. The long-term efficacy, however, is unclear.

Intermittent fasting (IF) has become popular in recent years due to its simplicity and potential to facilitate weight loss. The most studied forms of IF are: 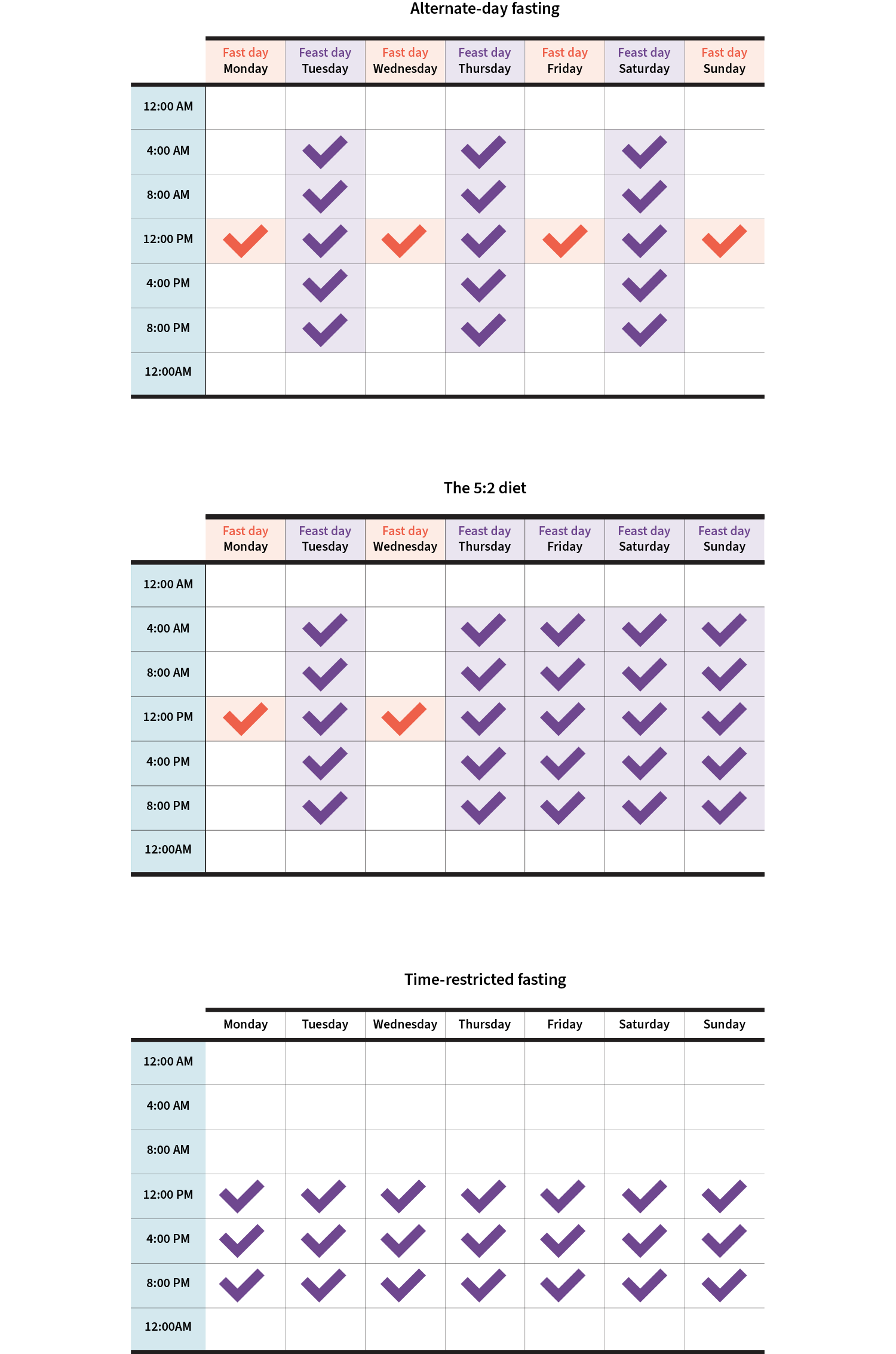 This narrative review summarized the body of literature assessing the effectiveness of IF for reducing body weight and decreasing cardiometabolic disease risk. The authors also assessed the safety of IF and provided practical recommendations and directions for future research.

The authors included randomized controlled trials that were conducted in adults, lasted at least 5 weeks, and included either a control group (no change in diet or physical activity) or a daily calorie restriction group as a comparator.

All 4 studies comparing ADF to a control group reported that ADF resulted in greater weight loss. All 3 comparing it to a 1,500-calorie restriction group reported similar effects on body weight. ADF reduced body weight by 4–8% from baseline in all included studies.

None of the 9 studies assessing TRE reported a greater loss in body weight than the control group, and only 3 reported a reduction in body weight from baseline, ranging from 3–4% (one used a 6-hour feeding window and two used an 8-hour window). One study using an 8-hour feeding window reported a within-group weight gain of 2% (the participants in that study were women with a BMI of less than 25 who performed resistance training). None of the included studies compared TRE to a calorie-restricted diet.

Most of the included studies reported a ratio of fat mass loss to lean mass loss similar to that of calorie restriction (75% of weight lost as fat, 25% lost as lean mass). However, in 2 TRE studies using an 8-hour feeding window in participants with a BMI of less than 25, the participants experienced muscle mass maintenance or accretion and fat mass loss compared to a control group with a similar energy intake.

The participants reduced their overall energy intake by approximately 10–30% relative to their baseline. The researchers also noted that participants following ADF or 5:2 only consumed an additional 10–15% above their energy needs on feast days. The authors noted that, contrary to concerns expressed by some clinicians that people might overeat during their TRE eating window, most participants experienced an unplanned reduction in energy intake.

Of the 5 studies assessing the 5:2 diet and blood pressure, 2 reported reductions in both systolic and diastolic blood pressure from baseline. The reductions were similar to those observed in a calorie restriction group in both studies.

Two ADF studies, one 5:2 study, and 4 TRE studies indicated that IF did not affect circulating inflammatory markers.

ADF and TRE did not increase the frequency of constipation, diarrhea, nausea, dry mouth, bad breath, irritability, fatigue, or dizziness. Headaches due to dehydration were occasionally reported.

Two trials (one ADF and one TRE study) indicated that IF didn’t increase the rates of binge eating, purging, depression, or fear of becoming overweight. However, as participants with an eating disorder history were excluded from these trials, it remains unknown whether IF is safe in individuals with a diagnosed eating disorder or those at risk of developing an eating disorder.

One study found that 8 weeks of 8-hour TRE decreased free and total testosterone concentrations in men. In contrast, a 24-week 5:2 study found that IF did not affect androstenedione, testosterone, dehydroepiandrosterone sulfate, sex hormone-binding globulin, or prolactin in premenopausal women. Two studies (one 8-hour TRE study and one ADF study) reported that circulating thyroid hormone levels remained unchanged after IF.

Finally, the authors reported that IF either had no effect on resting metabolic rate when weight was maintained or resulted in minor reductions (100–200 kcal) when weight was reduced by 5–7% from baseline.

The authors indicated that the following populations should not engage in intermittent fasting:

The authors noted that healthy adults with a BMI of at least 25 and who do not have type 1 diabetes, type 2 diabetes, or other comorbidities can safely engage in IF without medical supervision. They noted that IF might be effective for weight management in adolescents with obesity, but also that IF in this group should only be undertaken when weight loss is clinically indicated and under medical supervision.

The authors noted an adjustment period of 1–2 weeks, during which headaches are common. They noted that participants should be encouraged to consume plenty of fruits, vegetables, and whole grains to increase their fiber and micronutrient intake and consume at least 50 grams of protein on fast days (for ADF and 5:2) to mitigate hunger and prevent excessive lean mass loss. They advised against alcohol on fast days, as energy intake is greatly limited. Behavioral change strategies should be encouraged as an adjunct therapy to fasting to promote weight management.

Preliminary findings suggest that intermittent fasting might be safe for people with type 1 or 2 diabetes. However, these individuals should be in weekly contact with their physician to monitor for adverse effects and should test their fasting glucose levels throughout the day. People with type 1 diabetes who are on ADF or 5:2 might be advised to reduce their basal insulin dose by 50% on fast days and 10% on non-fast days. People with type 2 diabetes and an HbA1C of less than 7% might be advised to discontinue sulfonylureas and insulin while undergoing ADF or the 5:2 diet. An endocrinologist should work with each person individually, and medications should not be adjusted without consultation with a medical professional.

The authors noted the following directions for future research to address gaps in the IF literature:

Limitations of the current evidence

The authors noted that the majority of the included studies had small sample sizes (10–150 participants), were conducted in the U.S., and were at high risk of bias primarily due to missing participant outcome data.

The findings of the current review regarding body weight and body composition are consistent with recent meta-analyses (one of which is covered in this previous review), suggesting that IF and continuous energy restriction result in similar reductions in body weight and fat mass.[1][2][3]

Here are some additional key takeaways from previous Examine research breakdowns on this topic:

There are 8 more summaries in the Editor's Picks category for June 2022 including ...