Coffee or tea? Why not both?

This prospective cohort study followed 365,682 older adults over a median 11.4 years. Compared to drinking only coffee or only tea, drinking both was associated with lower risks of stroke (−11%), ischemic stroke (−11%), dementia (−8%), and vascular dementia (−18%).

In developed countries, the percentage of adults aged ≥65 continues to increase, as does the number of people with age-related dementia. In the U.S., the number of people aged ≥65 with Alzheimer’s disease (AD) is projected to reach 7.2 million by 2025, which would be a 16% increase from 2021’s 6.2 million.[1]

Stroke, another major cause of disability, shares some modifiable risk factors with dementia,[2] and an estimated 90% of strokes and 35% of dementia cases are preventable.[3] Furthermore, because a stroke doubles the risk of developing dementia and because strokes are more common than dementia, more than a third of dementia cases could be prevented by preventing strokes.[4] These data, combined with the limited efficacy of the drugs used to treat dementia, have led to a growing interest in lifestyle strategies to prevent stroke and dementia.

Coffee and tea are among the most widely consumed beverages in the world. Observational studies have reported inverse associations between coffee or tea and the incidence of stroke and dementia,[5][6][7] but what if you drink both?

This prospective cohort study looked for associations between (i) coffee and/or tea and (ii) the risks of stroke and dementia. It followed 365,682 adults aged 50–74 (at baseline) over a median 11.4 years. Coffee and tea intakes were self-reported at baseline.

This study had several limitations, of which we’ll mention three:

Many of the health benefits of coffee and tea can be attributed to the antioxidant and anti-inflammatory properties of their polyphenols. Caffeine is a polyphenol present is both coffee and tea; in addition, coffee is rich in chlorogenic acid, trigonelline, diterpenes (notably cafestol and kahweol), and melanoidins,[8] whereas tea is rich in catechins (notably EGCG).[9] The catechin content per gram of dry weight is 150–200 mg for green tea and 40–60 mg for black tea.[10][11] Green tea is unfermented tea, whereas black tea is fully fermented; as a result of fermentation, catechins combine to form theaflavins and thearubigins.[12]

Oxidative stress plays a crucial role in the development of various diseases, including dementia and CVD.[13][14] Polyphenols can mitigate oxidative stress by scavenging free radicals,[15] which helps explain why coffee and tea have been associated with a lower risk of dementia and CVD. Polyphenols may also promote nitric oxide production and endothelial function, thus reducing stroke risk.[16][17][18] 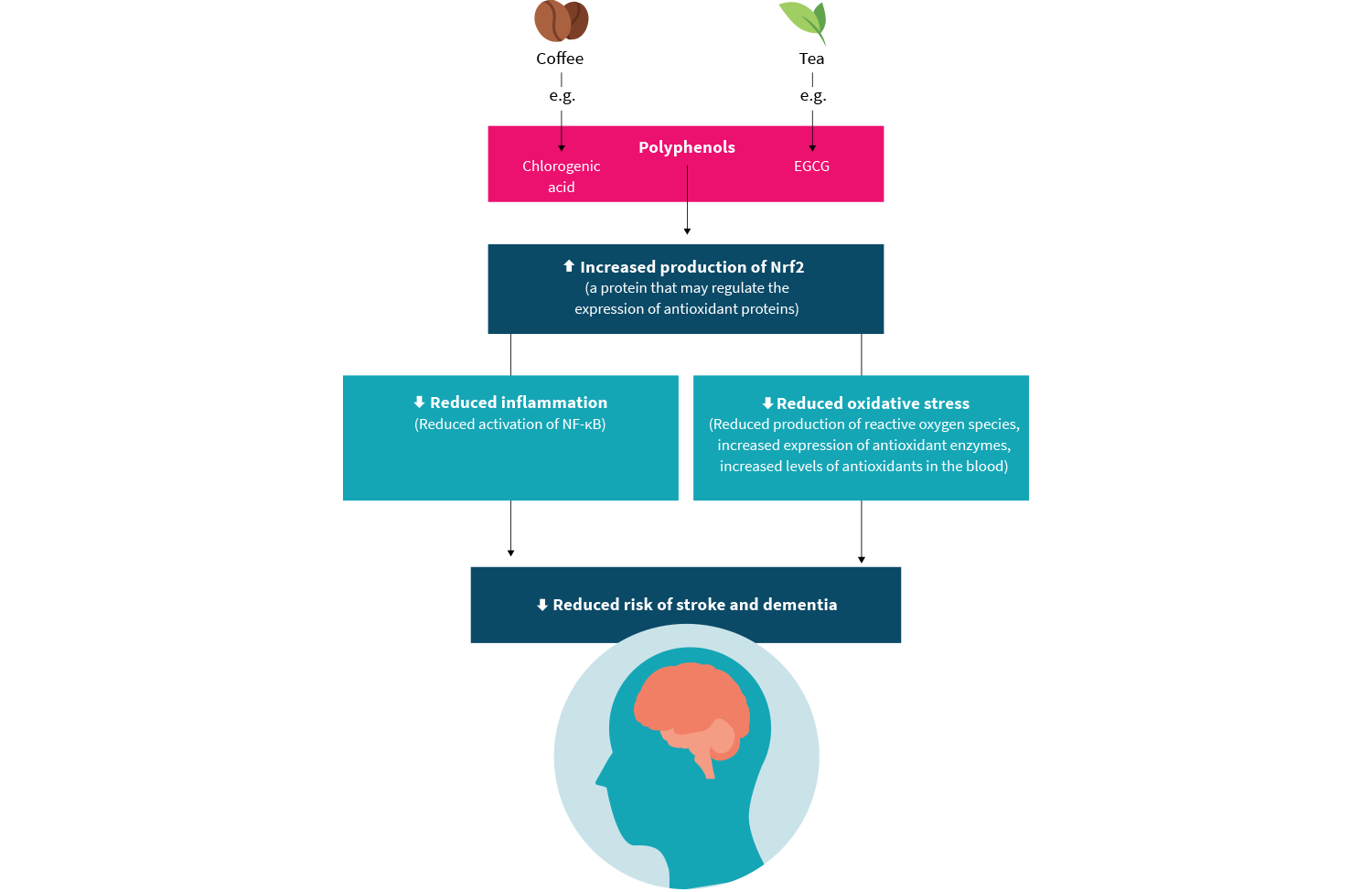 The few studies that looked at both coffee and tea suggest that drinking both is better than drinking either for reducing the risk of CVD, the risk of stroke, and the risk of all-cause mortality.[29][30] This may be due to different polyphenols activating different patterns of cell-protective genes, which is also one of the reasons eating a variety of fruits and vegetables is beneficial.[31]

🔍 Digging Deeper: How does it work?

A mild biological stress response follows the ingestion of polyphenols (be they from coffee, tea, fruits, or vegetables[31]).[32] Many pathways get activated to increase the expression of hundreds of cell-protective genes, stimulating antioxidant and anti-inflammatory activity, mitochondrial biogenesis, DNA repair, autophagy, and cell rejuvenation or apoptosis.[33] The pathways involved appear to be centrally regulated by the nuclear factor erythroid 2-related factor-2 (NRf2) system.[34][35]