Does exercise adaptation vary with genetics?

We all adapt to exercise differently. This meta-analysis attributes a large part of this variance to genetics: 44% for endurance, 72% for strength, and 10% for power. Genetics research is still in its infancy, however, so those numbers are to be taken with a grain of salt, and we’re still far from being able to predict an individual’s response to exercise based on his or her genotype.

Endurance, strength, and power are the three main aspects of exercise fitness. While everyone can improve them through exercise, some people have an easier time of it. Genetics may explain up to 80% of the interindividual variance in exercise adaptation. Various genes and polymorphisms (gene variations) are involved, and identifying them all will be the work of many, many studies.

This meta-analysis of 24 studies included 3,012 healthy, untrained people aged 18–55. The interventions lasted ≥2 weeks, did not involve dietary manipulations, and included one of the following forms of exercise:

Endurance, strength, and power increased by 11%, 22%, and 12% over the course of the interventions. The change in endurance was not statistically significant.

Thirteen candidate genes and their associated alleles were identified and associated with endurance (9 genes), strength (6), and power (4): 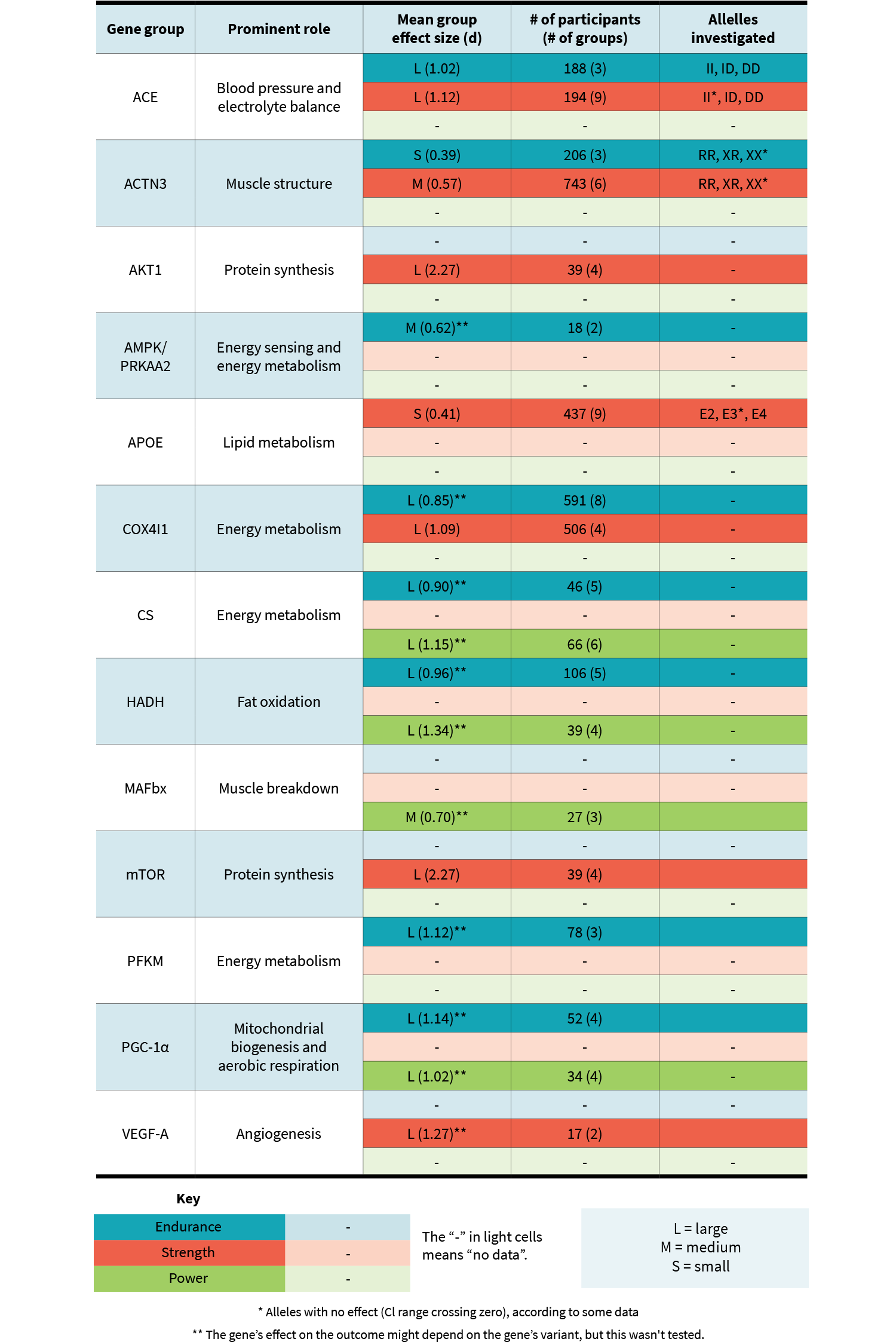 Based on the subgroup analyses, genetic differences explained 44%, 72%, and 10% of the response variance for endurance, strength, and power.

There are plenty of reasons why we should consider these results preliminary.

Moreover, the different methods to quantify mRNA levels each have their own strengths and limitations and can be influenced by different databases and analysis methods.

For those reasons, compared to differences in mRNA expression, differences in the translational machinery as a whole — changes involving the ribosomes, mRNA, tRNA, amino acids, and more — appear to be better indicators of final protein expression.[4][5]

A 2016 meta-analysis of data from 479 twins and siblings attributed more than half of interindividual differences in VO2max to genetics.[6]

A 2017 systematic review of 32 studies identified 97 genes that might predict VO2max trainability. It suggests that phenotypes depend on combinations of genes (and gene variants), rather than on individual genes (or gene variants).[1]

A 2015 controlled trial (an 18-week endurance-training program for 206 adults) demonstrated that different genetic variants of a specific ACTN3 gene (i.e., XX, RR, RX) could affect oxygen uptake differently.[7] This trial was included in the meta-analysis under review, which found that, although the effect size was small for all the variants, it was nonsignificant only for the XX variant.[8] The XX gene variant has also been associated with poorer strength and power.[9]

Several studies have demonstrated that training adaptation depends on both gene expression (RNA levels) and the specific fitness outcomes measured. Which individual genes (or gene variants) or combinations of genes (or gene variants) are involved, however, isn’t always clear.[10][11] Moreover, the genome-wide association studies that generally drive these gene-outcome associations do not always account for nongenetic factors that can influence the outcomes (such as baseline training status[12] and proper rest[13]). And even when they do try to account for various such confounders, they cannot possibly set perfect case-control comparisons.

Still, despite their many limitations, studies looking for gene-outcome associations increase our understanding of how genes, gene variants, and their combinations affect how we each respond to various external factors,[14] such as exercise, as we saw here, or caffeine, as we saw in a previous Study Summary.[15]