Switching from a Western diet to a Mediterranean diet increased urinary pesticide residues, except when organic foods were used.

This summary has been revised. Below is a list of changes:
1. We clarified that the authors did test for organic pesticides in their food samples.
2. We reworked language to emphasize that, while pesticides can have health impacts, there is insufficient data to suggest that the pesticide exposure from diet (as opposed to occupational pesticide exposure) can cause clinically meaningful effects.
3. We added more details about the differences between relative and absolute differences in pesticide exposure between organic and conventional foods.
4. We removed the statement that the findings “contradict” the findings of the USDA Pesticide Data Program. Given that the study was not conducted in the United States, the two datasets shouldn’t be compared directly.

The “Western diet” is characterized by high intakes of red meat and foods that are highly processed or refined and contain large amounts of sugar and salt.[1] It is associated with poor health outcomes (such as obesity, type 2 diabetes, metabolic syndrome, kidney disease, and cancer), so switching to a healthier diet is advisable.

One such diet is the Mediterranean diet. It’s well studied and can reliably improve the health of people switching from a Western diet. However, since it involves eating more plant-based foods (among other changes), it could have the drawback of increasing pesticide exposure. Is it the case, and if so, is there a solution?

This 5-week study was a randomized controlled trial (RCT) within a crossover trial conducted in 27 graduate students from the UK who travelled to Crete, the largest of the Greek islands, as part of an agricultural field course.

The participants were in the UK during weeks 1, 4, and 5, and in Crete during weeks 2 and 3. While in the UK, they ate their usual Western diet. While in Crete, they ate a Mediterranean diet, with all food provided by the researchers. The participants were divided into two groups: one was fed organic food, while the other was fed conventional food.

All the foods provided were tested for pesticides. The findings informed which pesticide residues — parent compounds and metabolites — would be measured in 24-hour urine samples collected at the ends of weeks 1, 2, 3, and 5. The samples were also tested for several common environmental pesticides, to see if the change in location altered pesticide exposure.

The primary outcome of the study was urinary pesticide residue excretion (UPRE): the concentration of pesticide residues in the urine multiplied by the volume of urine. UPRE was measured for each pesticide individually as well as for pesticides in general.

Switching from a Western diet to a Mediterranean diet increased pesticide exposure when conventional food was used, but not when organic food was used.

When conventional food was used, the UPRE for insecticide, pyrethroid, and organophosphate residues increased by 2 to 4 times, and total synthetic chemical residue excretion by 17%.

Total UPRE was 91% lower in the group that consumed organic food during the trip. More specifically, this group had lower UPRE for chlormequat (−95%), organophosphate (−72%), insecticide (−66%), pyrethroid (−53%), and herbicide (−26%) residues. Furthermore, some of the pesticides found in the conventional food were completely absent from the organic food.

The authors listed the food types in decreasing order of UPRE and divided them between two groups: 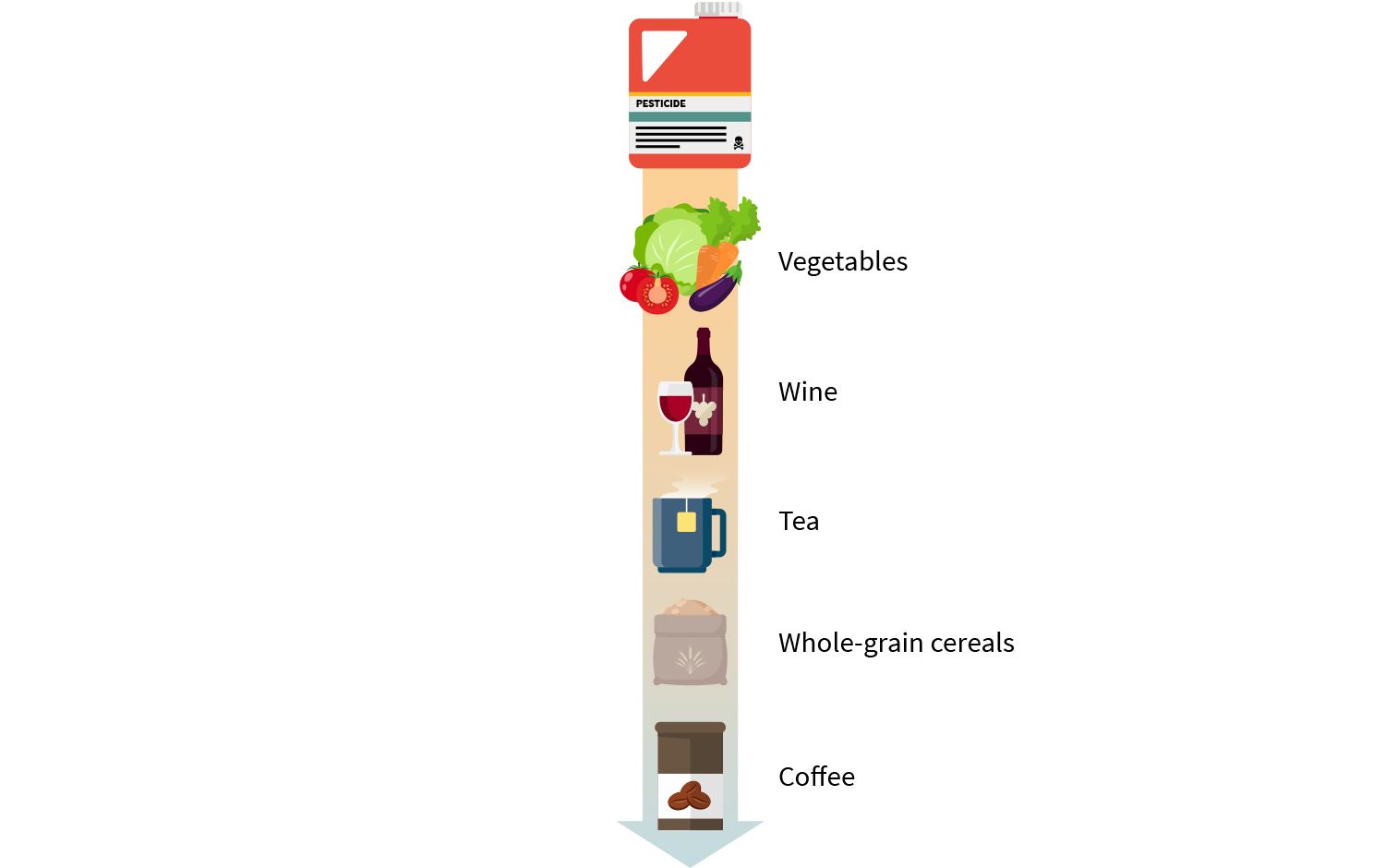 In conclusion, while switching from a Western diet to a Mediterranean diet has been shown to have health benefits, the possible increase in pesticide exposure (due notably to an increase in vegetable and whole-grain intake) needs to be factored into a person’s decision.

The study’s preregistration form lists blood measurements the authors planned on taking, but while the published paper does mention blood samples, it doesn’t mention any blood-related outcomes. Likewise, the preregistration form mentions the authors’ intent to report outcomes that could demonstrate how pesticide exposure affected the participants’ health, but the paper mentions no such outcomes.

While organic produce (notably fruit) often has less synthetic pesticide residue than conventional produce,[2] natural (organic) pesticides exist, are used to grow organic crops, and are not always better for the consumer or the environment.[3] A major strength of this study is that the researchers did test for a number of organic pesticides, including neem oil (azadirachtin) and rotenone.

Of course, it can be difficult to control for confounders. People who eat organic food are more likely to exercise, not smoke, be of high socioeconomic status, and follow certain dietary practices, such as vegetarianism/veganism — those are all factors that can independently benefit health.[5][6]

Overall, it’s very likely that previously listed factors account for the majority (or entirety) of the difference between organic and conventional foods. There is research that shows that organic food has relatively higher levels of essential nutrients and antioxidants and lower levels of toxic metals;[7] However, the absolute change in these levels is small, and interventional research in humans doesn’t find that organic foods lead to higher/lower levels of these compounds in people’s blood.

Another potential reason for the potential health benefits of organic food is, as we saw, that organic food can have lower levels of pesticides: four times lower, according to a 2014 meta-analysis.[2] Interventional studies reliably show that switching to organic food can drastically reduce the amount of pesticide residues in people’s urine.[8][9][10][11] It’s worth noting, however, that not all these studies tested for organic pesticides, which considerably reduces their ability to estimate overall pesticide exposure. Additionally, even if the relative amounts of pesticides in organic food are lower than conventional, there’s a decent likelihood that the absolute difference is not enough to be clinically meaningful, given that both conventional and organic foods already have very low levels of pesticides to begin with.[12][13]

There is evidence that even very low doses of pesticides might still have physiological effects, and have been implicated in diseases such as cancer, diabetes, asthma, Parkinson’s (and other types of cognitive issues), and impaired hormonal and reproductive function.[14][15] That said, the majority of this evidence is from research conducted in agricultural workers who have chronic, occupational exposure to pesticides; exposure in the general public is very different from this population, so it may be erroneous to extrapolate from this data.

Taken altogether, it appears that organic foods definitely reduce relative exposure to conventional pesticides, and potentially even reduce relative exposure to organic pesticides (at least with the specific foods used in this study). Organic foods are associated with improved health, but confounding factors are likely a major driver to this relationship. Given that the data on direct pesticide exposure and health rarely comes from populations that approximate the average consumer, it’s too early to know whether these small differences in absolute pesticide exposure actually translate to effects that are meaningful for a person’s health.

There are 18 more summaries in the Diets & Foods category for January 2022 including ...