Will cardio hurt your strength gains? It depends on your training level!

Study under review: Development of Maximal Dynamic Strength During Concurrent Resistance and Endurance Training in Untrained, Moderately Trained, and Trained Individuals: A Systematic Review and Meta-analysis

What are the effects of concurrent resistance and endurance training, compared to resistance training alone, on the development of maximal strength in untrained, moderately trained, and trained individuals?

The training status of the participants is one potential explanation for these divergent findings. It is also one of the few putative confounders that has not been examined in previous meta-analyses. As such, the primary aim of the meta-analysis under review was to fill this research gap. The secondary aim was to determine whether the length of the recovery period between the endurance and resistance training sessions can influence the potential interference effect.

Although some studies suggest that concurrent resistance and endurance training may produce inferior strength gains compared to resistance training only, other studies have reported conflicting results. While these discrepancies may relate to differences between studies in the training status of the participants, the meta-analysis at hand is the first to examine this possibility.

The endurance sessions consisted of running or cycling at an intensity of at least 70% of maximal heart rate, and included both steady-state exercise and high-intensity interval training (HIIT). The frequency of endurance training ranged between two and six sessions per week, with most studies using training frequencies of two to three sessions per week. The resistance sessions included the exercises used for the main outcome. Unlike for participants in trials using intensities of more than 60% of a participant’s 1RM, failure was obligatory for participants in trials prescribing RT with less than 60% 1RM. The frequency of strength training ranged between two and five sessions per week. The length of the studies ranged from 6 to 21 weeks, with an average length of 11 weeks.

The researchers used the Physiotherapy Evidence Database (PEDro[9]) scale to assess the methodological quality of individual studies. Only moderate- and high-quality studies (PEDro scores of 5–10) were included in the meta-analysis.

To analyze the data, a random-effects model was used to pool the weighted estimation of standardized mean differences (SMD) across studies. The SMD is used to determine the size of the effect, with 0.2 defined as small, 0.5 as moderate, and 0.8 as large. Heterogeneity was tested using the I2 statistic. The meta-analysis followed PRISMA guidelines, but was not preregistered.

This meta-analysis compared the effects of concurrent training to resistance training, alone, on maximal strength in the squat or leg press in healthy untrained, moderately trained, and trained young adults. In addition to the main analyses, the researchers also conducted subgroup analyses based on whether the resistance and endurance training activities were performed in the same session (less than 20 minutes between activities) or in separate sessions (more than 2 hours between activities). 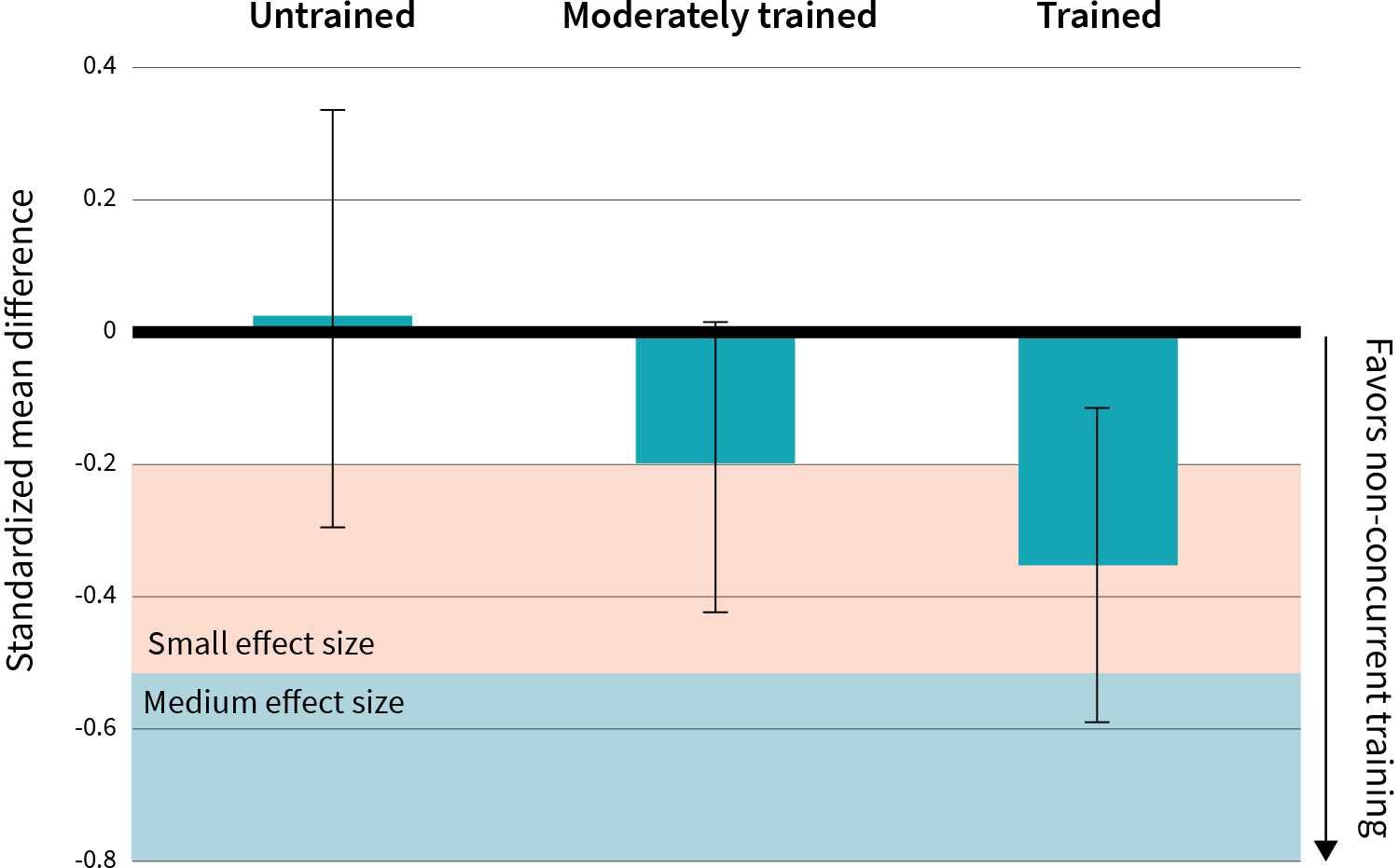 According to the subgroup analyses, the negative effects observed with concurrent training in trained participants occurred when resistance and endurance training were performed within the same training session (SMD: -0.66), but not when performed in separate training sessions. No heterogeneity was detected in any of the analyses.

One potential explanation[10] for these results is that in untrained individuals, any overload stimulus from exercise (resistance- or endurance-based) may be large enough to stimulate training adaptations. In fact, it’s reasonable to speculate that, rather than interfere with each other, the response to the two exercise modes may be additive, promoting a generic adaptation without the need for true training specificity. As training progresses and an individual gains more training experience, there is a need for progressively greater training loads and training specificity (i.e., a greater focus on one mode of training) to stimulate further adaptations, resulting in an impaired response to concurrent training, compared to resistance training alone.

That said, there are a number of potential confounding variables that may affect the results. One such variable is the length of the recovery period between the endurance and resistance training sessions. Specifically, some research[11] suggests that concurrent training may impair strength gains when resistance and endurance training are performed within the same session, but not when performed during separate sessions. In several cases, this was true even if those sessions took place only a few hours apart (such as morning and afternoon, for example). While the results from the subgroup analyses in the study under review support the findings of the aforementioned research, these results were largely driven by two interventions from the same study[6] as shown in Figure 2. 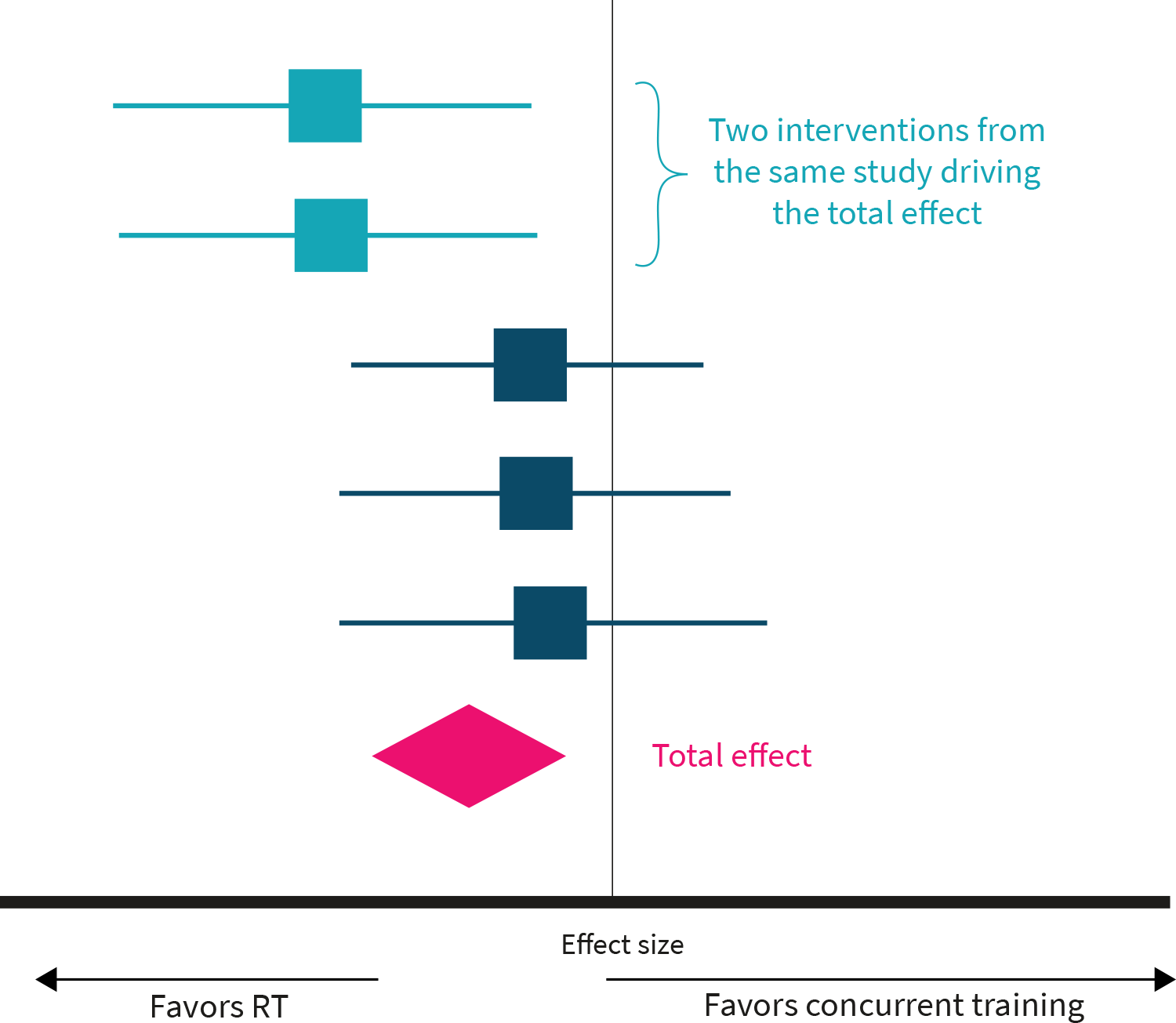 Another potential confounding variable is endurance training intensity. Since high-intensity training (HIT) and HIIT were more frequently used in the training programs of participants in the trained and moderately trained categories than of those in the untrained category, it is possible that endurance training intensity may have affected the results. This point is supported by the results of the aforementioned 2018 meta-analysis[12], which found that concurrent HIIT and resistance training resulted in a smaller increase in lower body strength compared to resistance training alone.

The generalizability of the results also merits discussion. Since the outcome of the meta-analysis was the maximal strength of the squat and leg press, these findings cannot be generalized to other performance outcomes, or to measures of upper body strength. Moreover, it is worth pointing out that the meta-analysis did not include highly trained participants or elite athletes in the trained category, which means that the results are not transferable to this population. Furthermore, the lack of trials employing trained women means the results of the trained category cannot be generalized to this population, either.

Overall, the inclusion of only moderate and high-quality trials in the meta-analysis under review, and the absence of heterogeneity in all of the analyses increase confidence in the findings. However, keep in mind that, in addition to randomized trials, the meta-analysis also included non-randomized trials, which are more prone to systematic and confounding biases. Moreover, it’s worth noting that the results of the main analyses may have been confounded by the more frequent use of HIT and HIIT in trials with trained participants. Lastly, the results of the subgroup analysis in trained participants were largely driven by two interventions from the same study, which used a non-randomized design.

The good quality of the trials and the absence of heterogeneity increase confidence in the findings. However, the inclusion of non-randomized trials in the meta analysis, the possibility for endurance training intensity to have confounded the results of the main analyses, and the issue with the outlier non-randomized study largely driving the results of the subgroup analysis in trained participants suggest that the results should be interpreted cautiously.