Which diet’s best for weight and metabolic risk factors in people with type 2 diabetes?

Study under review: The impact of major dietary patterns on glycemic control, cardiovascular risk factors, and weight loss in patients with type 2 diabetes: A network meta-analysis.

Type 2 diabetes mellitus[1] (T2DM) is a chronic disease characterized by high blood glucose and reduced insulin sensitivity. T2DM prevalence quadrupled from 1980 to 2014 and is projected to reach nearly 600 million cases[2] by the year 2035. Obesity is considered the most important risk factor for the condition, accounting for about 90% of all T2DM cases[3], and patients generally display symptoms associated with metabolic syndrome[4] and have an increased risk for cardiovascular disease.

While some drugs are available to help manage T2DM, lifestyle change (i.e., diet and exercise improvements) is preferred, as it is not associated with cardiovascular complications[5] that accompany the use of some drugs, and has demonstrated improvements[6] in insulin sensitivity and disease progression. The American Diabetes Association recommends[7] the Mediterranean, DASH, and plant-based diets low in carbohydrates, saturated fats, and trans fats for weight loss in obese or overweight individuals who have or are at risk of developing T2DM.

Recent studies[8] suggest diets high in monounsaturated fats[9] can improve glycemic control. The monounsaturated fat content of the Mediterranean diet can be high enough to cover 25% of daily caloric intake[10] and greater adherence to the diet reduces diabetes risk[11]. A systematic review and meta-analysis[12] of the literature found that the Mediterranean diet was associated with better glycemic control and cardiovascular risk factors than other diets, including a low-fat diet.

Still, there is no consensus on the best antidiabetic diet. Reductions in carbohydrate intake[13] appear to improve T2DM management. When compared to a normal Mediterranean and American Diabetic Association diet, greater improvements in glycemic control and cardiovascular risk factors in a low-carbohydrate version of the Mediterranean diet have been reported[14]. While a network meta-analysis[15], whose results are shown in FIgure 1, has previously compared different dietary patterns for glycemic control in people with T2DM, the authors of this study conducted a systematic review and network meta-analysis to investigate the efficacy of different dietary patterns on weight loss and cardiovascular risk factors in addition to glycemic control. 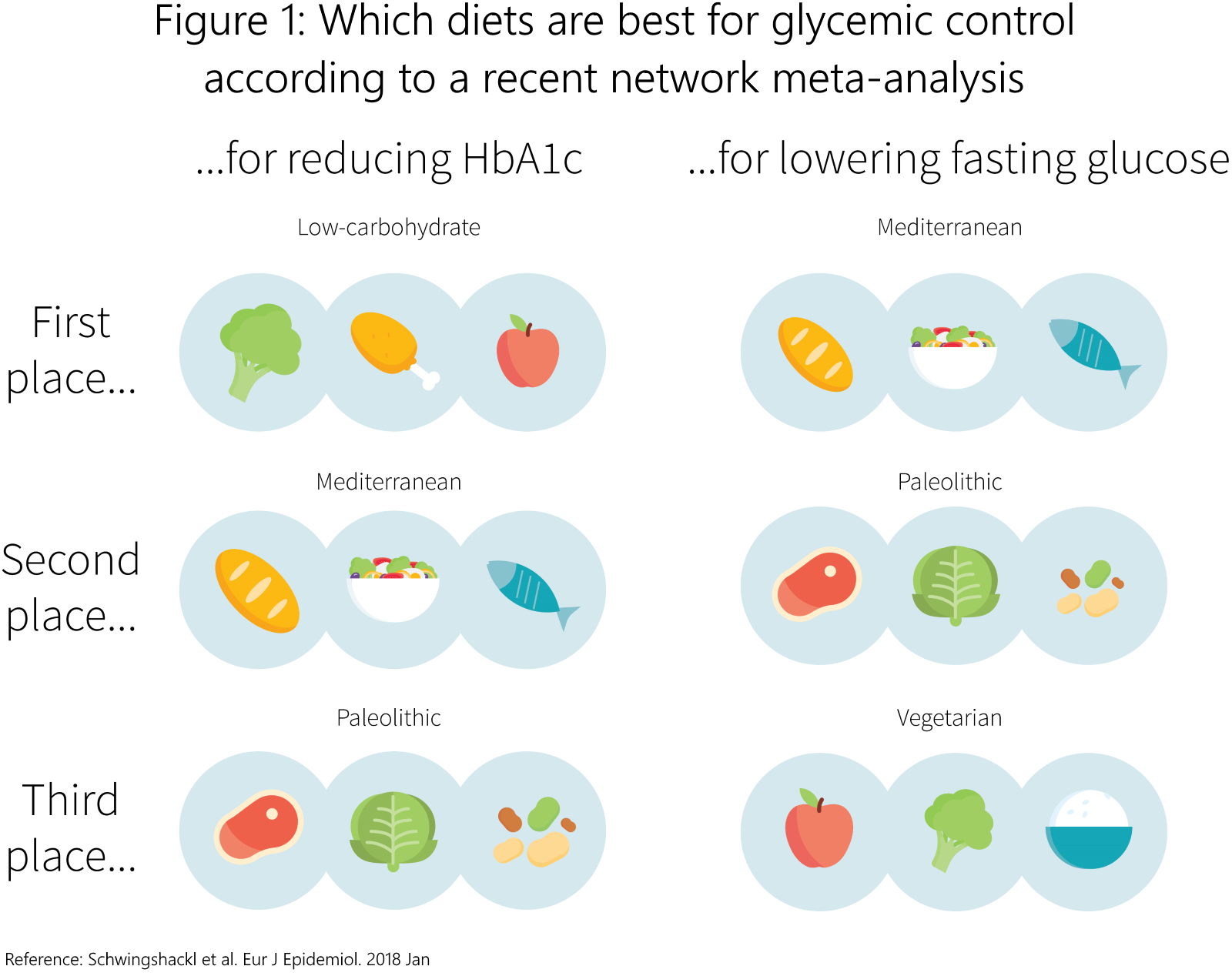 With type 2 diabetes prevalent and expected to affect close to 10% of the world population, targeting its most important risk factor of obesity through dietary intervention appears to be a good bet. While recommendations consist of plant-based diets low in carbohydrates and certain fats, there is no consensus on the best antidiabetic diet. The authors of the study under review aimed to investigate the best diet for improved glycemic control, cardiovascular risk factors, and weight loss.

To simultaneously compare the multiple interventions, each two-arm study was included in a random effects network meta-analysis. This allows for quantification of the relative effect of each dietary intervention against every other dietary intervention included. Risk of bias for individual studies, sensitivity for the primary outcome, and homogeneity within and between study designs, as well as across the network of studies, was assessed. For a deeper look at network meta-analyses, see Study Deep Dives #46, Volume 1, “DASHing toward lower blood pressure.”

The Mediterranean diet was found to have the highest probability to improve glycemic control, reduce blood lipids, and promote weight loss when compared to low-fat, low-carbohydrate, high-carbohydrate, and regular diets. Significant statistical heterogeneity was not present for any outcome except BMI between the Mediterranean and low-fat diets. The authors also mentioned some qualitative heterogeneity across population characteristics (i.e. age, gender, study duration, type of population, sample size) in the discussion, but the data was not reported.

Meta-analyses of studies directly comparing one diet to another revealed that the Mediterranean diet was superior to the low-fat diet (n=3) for reducing HbA1c, fasting glucose, bodyweight, waist circumference, total cholesterol and triglycerides, and increasing HDL-C. The Mediterranean diet also beat out participants’ regular diet for reducing HbA1c and LDL-C, while the low-carbohydrate diet improved HDL-C levels when compared to the low-fat diet. All other direct comparisons showed no differences between diets (low-fat vs. low-carb for all outcomes except HDL-C, n=4; Mediterranean vs. high-carb for all outcomes, n=2; Mediterranean vs. regular diet for all outcomes except HbA1c and LDL-C, n=1).

Since some comparisons were not done directly through studies, inferential (indirect) meta-analyses suggested that the high-carbohydrate diet improved LDL-C compared to the regular diet. No other comparisons were statistically significant.

You can find a summary of the statistically significant findings in Figure 2. 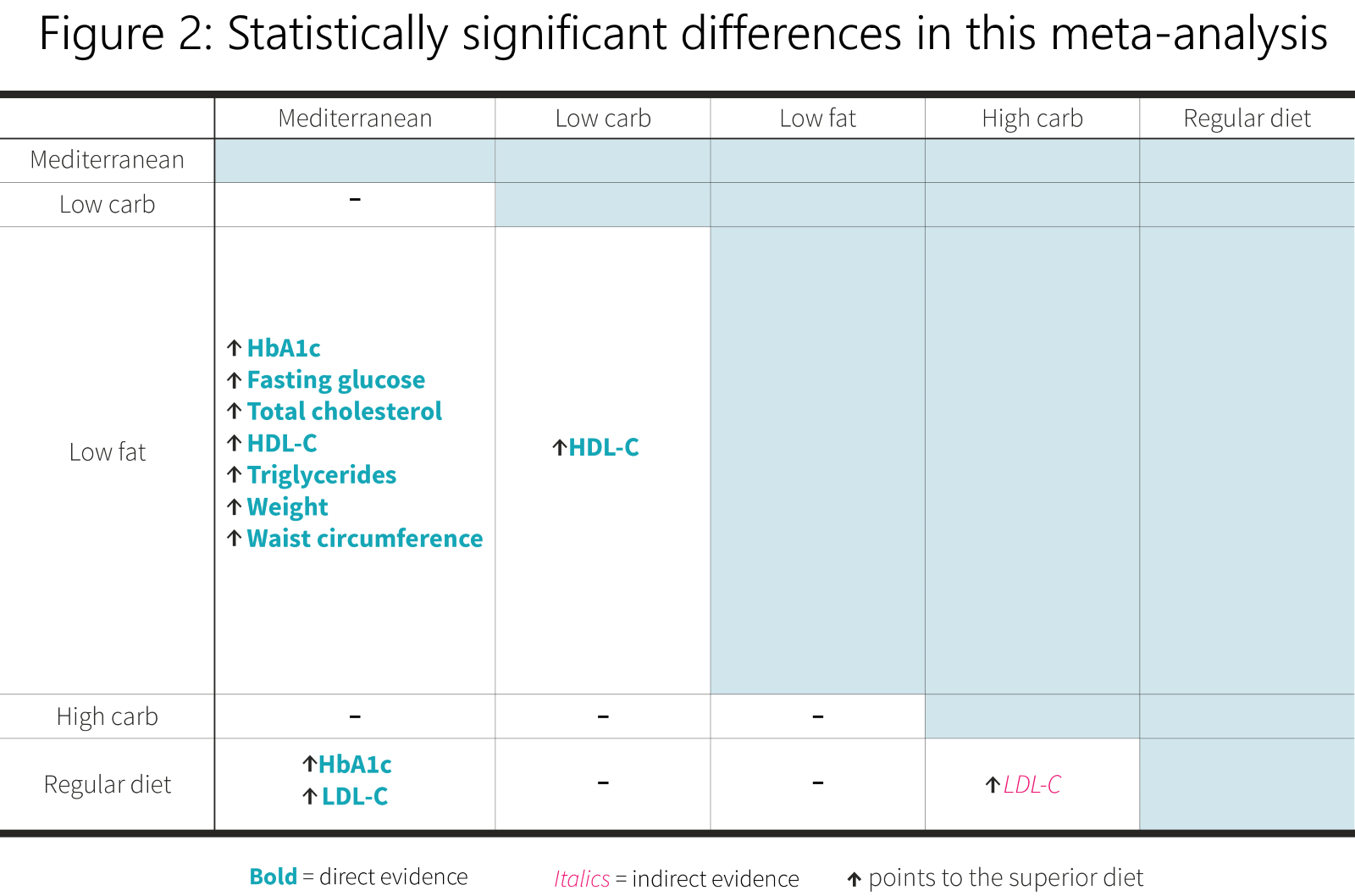 The Mediterranean diet demonstrated the highest probability of being the best dietary intervention to improve glycemic control, cardiovascular risk, and weight loss when compared to low-fat, low-carbohydrate, high-carbohydrate, and regular diets. When analyzing studies that directly compared diets, most significant differences were between the Mediterranean and low-fat diet for measures of glycemic control, blood lipids, and weight loss. A majority of studies demonstrated unclear risk for blinding and allocation concealment, while almost a third of studies did not address incomplete outcome data.

The network meta-analysis under review suggests that the Mediterranean diet has the greatest probability of being superior to the four other diets it was compared to for people with T2DM.

While the sensitivity analysis supports the findings, a meta-analysis can only be as good as the studies included. There were few significant differences in head-to-head comparisons and the indirect comparisons yielded almost no significant results, likely because the sample of studies was not nearly big enough to create a proper network between the five dietary interventions included. There were large error bars for many of the comparisons. This means that while the study under review can probably rule out massive differences across interventions, it isn’t capable of resolving medium or small differences very well.

There are several problems that can result from making so many comparisons with different studies. The most concerning one in the study at hand has to do with the heterogeneity of participant populations across studies, especially since the authors did not publish the data and only mentioned it as a part of the discussion.

Not only did the study lack a more detailed explanation of the heterogeneity, , but three of the 10 included studies were identified as having high (n=2) or unclear (n=1) risk of incomplete reporting of outcome data. This means that, out of the already small sample of studies included, only two-thirds of the studies reported their complete data, essentially reducing the sample of studies included in the meta-analysis to seven studies, with differences in participant age, gender, study duration, sample size, and type of population.

Within the small number of studies synthesized, neither duration nor method of intervention were considered and the level of diet monitoring was not mentioned. This may because there’s just not enough information to perform a subgroup analysis, which would allow for an examination of these factors’ influence. Moreover, greater than half of the studies demonstrated unclear risk for allocation concealment and blinding.

This study suggests that the Mediterranean diet is the best dietary approach to improve glycemic control, cardiovascular risk, and weight loss in people with type 2 diabetes. However, the lack of reporting for population characteristics and the mention of their heterogeneity, along with the small sample of studies, unclear levels of blinding and allocation concealment, and underreported outcome data, limits the confidence that can be placed in the results. Moreover, there was insufficient information to perform a subgroup analysis to consider factors like duration or method of intervention.

A previous systematic review and network meta-analysis[15] synthesized 56 studies to determine the most effective dietary intervention on glycemic control in people with T2DM. This meta-analysis included nine different dietary interventions and found that all interventions improved HbA1c and fasting glucose more than a control diet, but that the Mediterranean diet was the best, overall. The low-carbohydrate diet was slightly better at reducing HbA1c than the Mediterranean diet, but this was only in the short term; the latter was the best, while the former was not even in the top three, for reducing fasting glucose. This aligns with the primary outcome of the study at hand.

A meta-analysis[19] examining the same outcomes as the study under review for only the Mediterranean diet reported statistically significant improvements in total and HDL-cholesterol, triglycerides, weight loss, and HbA1c when compared to control diets. You can see the impact a Mediterranean diet made on some of these factors in Figure 3. On the other hand, a systematic review[20] comparing the Mediterranean diet to low-carbohydrate and low-fat diets showed similar reductions in weight loss and cardiovascular risk factors for all three dietary interventions, conflicting the evidence presented in the study at hand. Thus, there is still some uncertainty as to which diet best improves weight loss and/or cardiovascular risk factors in people with T2DM, especially given that small differences in adherence and intervention instruction (ie. group vs. individual[21]) can influence results and that these diets could overlap depending on food choices. 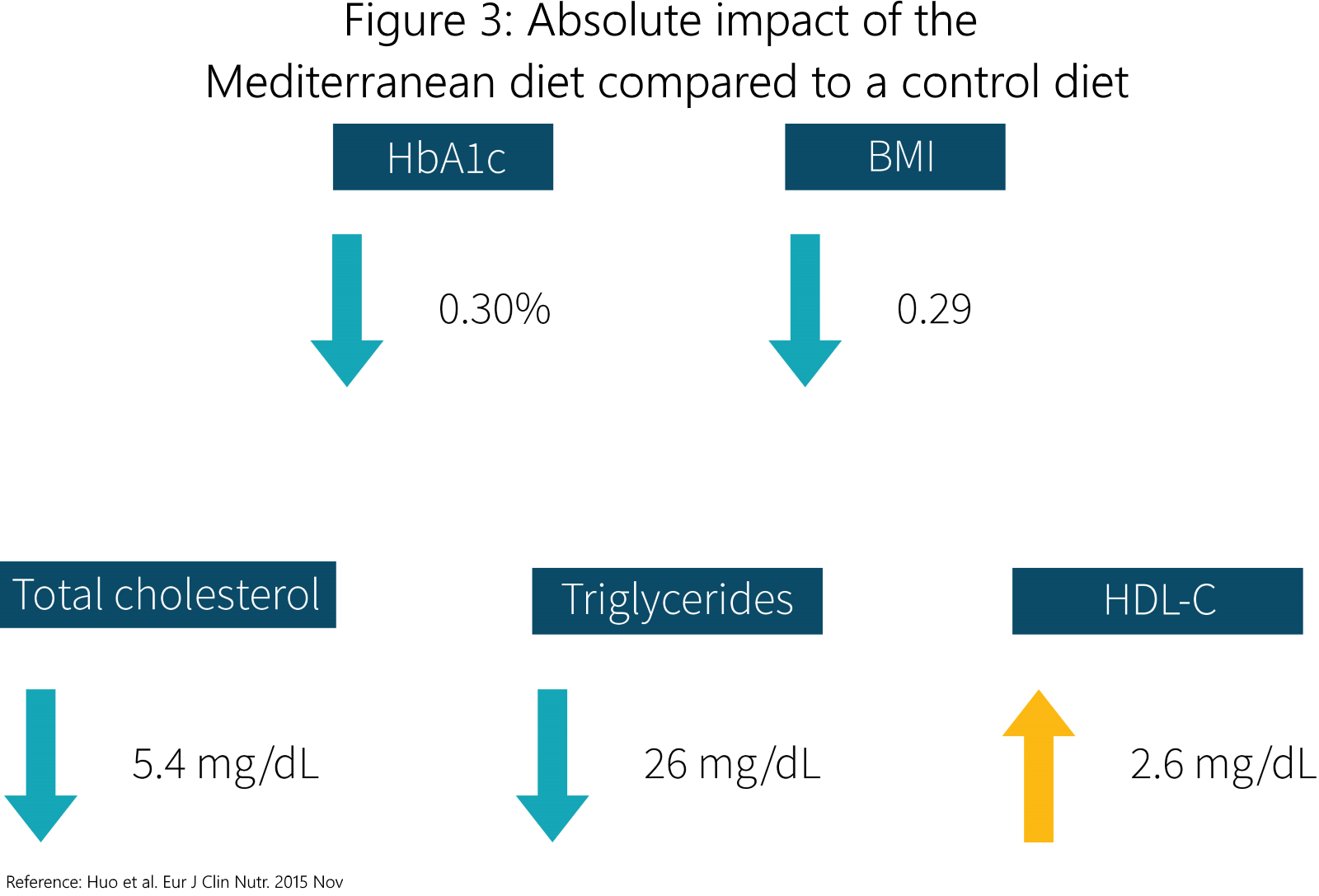 While the Mediterranean diet appears to be a slightly better antidiabetic diet, especially in terms of glycemic control, the low-carbohydrate diet appears to be a close runner-up. Previous studies suggest that a low-carbohydrate diet improves glycemic control better than other diets within the first year of dietary change. In terms of improvements in weight loss and cardiovascular risk factors, differences between diets appear to be too small, and confounding factors too big, to determine with certainty if there is a superior diet.

Q. What are the general specifications for a Mediterranean, low-carbohydrate, and low-fat diet?

A typical Mediterranean diet[22] is characterized by a focus on plant foods (fruits, vegetables, grains, nuts, seeds), primary sources of fat and dairy derived from olive oil, cheese, and yogurt, respectively, low to moderate amounts of fish, poultry, eggs, and red wine (generally with meals), and low to no intake of red meat.

This systematic review and network meta-analysis of 10 studies suggests that the Mediterranean diet is probably the most effective dietary approach to improve glycemic control, when compared to low-carbohydrate, low-fat, high-carbohydrate, and participants’ regular diets. However, this review included a very small number of studies that had many differences in population characteristics, with most exhibiting unclear levels of blinding, allocation concealment, and some not explaining missing outcome data. All of these factors limit the confidence that can be placed in the findings.

While other studies generally align with the findings of the study at hand, there is putative evidence suggesting that a low-carbohydrate diet may facilitate better glucose control, especially within the first year of the intervention. Whether one particular diet is superior for improvements in weight loss and/or cardiovascular risk factors is still uncertain.