Whey and guar gum: unlikely heroes for people with diabetes

Study under review: Effect of a low dose whey/guar preload on glycemic control in people with type 2 diabetes - a randomized controlled trial

Avoiding blood sugar spikes is a critical part of managing type 2 diabetes, since excess glucose in the blood can harm a variety of tissues in the body, from your eyes all the way down to your toes. While a variety of pharmaceutical and supplement options can help reduce blood sugar spikes, another effective option is right there in your food. Protein, fat, and fiber have all been found to lower glycemic response[1] when consumed as part of a meal.

However, the problem with adding lots of fat to a meal in an effort to improve glycemic response is that because fat is calorically dense, the caloric content of the meal increases significantly. If this added fat doesn't increase satiety enough to result in lower caloric intake at subsequent meals and snacks, weight gain can result. People with type 2 diabetes often face health issues due to extra body fat, so they have to be careful with calorie intake. Some supplements on the market are intended to emulate dietary fat’s ability to increase satiety, but not all of them are effective.

The study under review aimed to determine the effectiveness of a low-calorie (80 calories per serving) drink made up of whey protein and guar gum. Guar is a soluble fiber supplement derived from the guar bean plant. Previous studies have examined the effect of whey protein and various fibers, like pectin and guar, on glycemic control. For example, a 55 gram whey protein preload[2] has been shown to lower glucose by 3 mmol/L (54 mg/dL) in those with type 2 diabetes. In a previous study, guar delayed gastric emptying and decreased both glucose and insulin levels in people with type 2 diabetes.

The purpose of this study was to determine the effect of a drink containing guar (five grams) along with a lower dose of whey (17 grams) and lactose (three grams) on glycemic control. The type of whey wasn’t specified in the paper, so the lactose may have been part of a whey concentrate, or added separately for an unspecified reason.

The researchers hypothesized that the whey/guar combo would be as effective at lowering blood glucose as a larger 55 gram whey alone drink. This would mean around a 1 mmol/L (18 mg/dL) decrease in blood glucose, which would be a substantial reduction for type 2 diabetics or those at risk of the condition.

Participants
The people participating in the study all had prediabetes or type 2 diabetes, with fasting glucose ≤ 10 mmol/L (180 mg/dL) and glycosylated hemoglobin < 8.5%. Study participants with diabetes were on a metformin or diet-based treatment plan. Participants were excluded if they were attempting to lose weight, restrict calorie intake, or if they were taking insulin or any other medication besides metformin to manage their blood sugar.

Intervention
This study was an unblinded, randomized, crossover trial, with the main intervention occurring over a four-day period. First, participants had a continuous glucose monitoring system inserted. On each of the four days, study participants drank their preload drink (either whey/guar or plain water) in the morning, 15 minutes before eating the breakfast test meal. The preload drink consisted of 17 grams of whey protein, three grams of lactose, five grams of guar, and one gram of noncaloric sweetener (either stevia or sucralose) dissolved in 150 mL of cold water.

The breakfast test meal consisted of two slices of bread with margarine and jam (three slices for men), with tea and coffee also provided. Participants ate a standardized dinner the night before, in order to further control the experiment. Each subject served as their own control: on two randomly selected days out of the four total days of the trial, a subject was given whey and guar as the preload drink. On the other two days, they were given water instead.

The main outcome measures were glycemic control assessed via continuous glucose monitoring system, and finger-prick glucose tests before breakfast and at 15, 30, 45, 60, 90, 120, and 180 minutes after breakfast.

Finger-prick Glucose Test
Figure 1 shows how glucose levels in the whey/guar group compared to those in the water group. 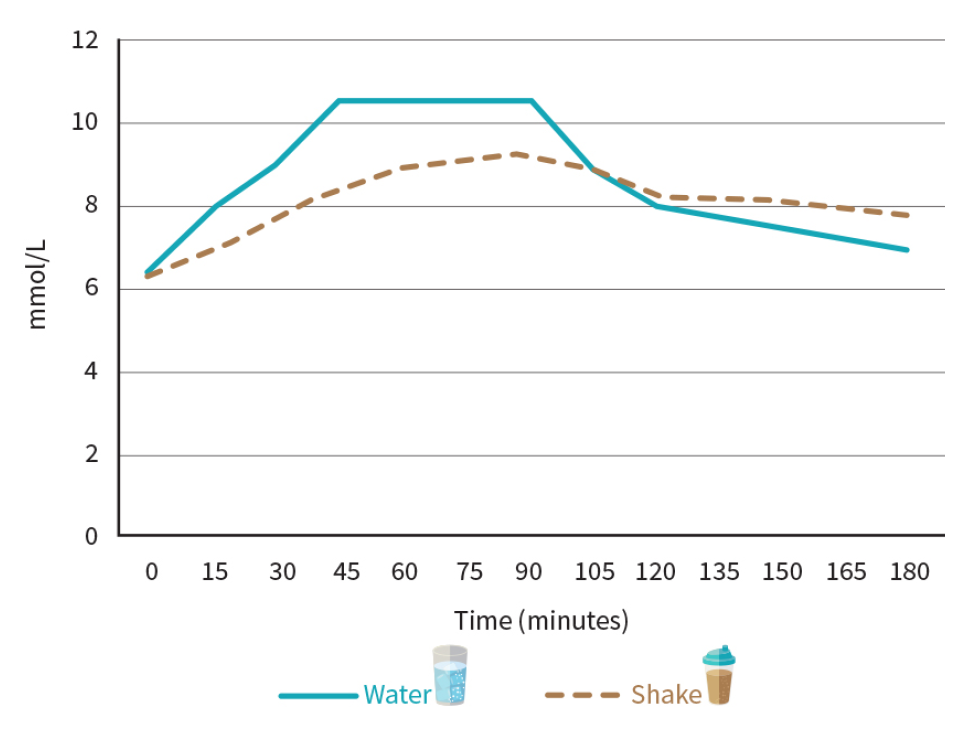 The finger-prick glucose curves were significantly different at all timepoints, except at 120 minutes. During the first 90 minutes after breakfast, blood glucose was significantly lower in the whey/guar drink group compared to the water group. After 180 minutes the whey/guar group had higher blood glucose than the water group, however the whey/guar group experienced a steadier and more controlled release of glucose into the bloodstream, leading to not only a slower rise in blood glucose levels, but also a slower drop in glucose levels. This is in contrast to the water group, in which blood glucose levels rose quickly after a high carbohydrate meal, and then dropped off faster as well. The average glucose reduction over the three hour period was 0.77 mmol/L (14 mg/dL). There was no difference in response between those with diabetes and prediabetes.

Continuous Glucose Monitoring System
Analyzing the continuous glucose monitoring system results for the three-hour period after breakfast reveals the following patterns: the average effect was a glucose peak reduction of 1.04 mmol/L (19 mg/dL) with a range of reduction of 2.3mmol/L to an increase of 1.3 mmol/L. Average glucose over the three-hour period decreased by 0.7 mmol/L (13 mg/dL). Seven participants experienced no reduction in their glucose peak, and five showed no delay in glucose peak.

The results of this study indicate that glycemic control was improved for 90 minutes after the consumption of a high carbohydrate breakfast, when study participants consumed a whey/guar drink 15 minutes before breakfast. The authors concluded that if the whey/guar drink was consumed twice a day before high carbohydrate meals, glycosylated hemoglobin could be lowered up to 1%. The authors note that they are currently conducting a six-month long randomized controlled trial to determine the effects of a protein/fiber premeal drink on glycosylated hemoglobin.

The authors of the study say they expect the blood glucose lowering effect of the whey/guar drink to be equally because of whey and guar. Whey and guar reduce glucose levels by delaying gastric emptying and providing extra protein, which induces insulin secretion.

Based on these study results, the whey/guar drink positively influences glycemic control for up to 90 minutes in older adults with (pre)diabetes. That is, older adults who actually regularly consume the drink. The study actually didn’t mention dropouts at all, so presumably there were none. Similarly, taste and overall acceptability of the whey/guar drink was not assessed, but both would likely be important factors in the long term success of such a strategy, since even the healthiest drink is not very useful if people can’t stomach drinking it twice a day.

The results of this study are promising and seem to indicate that whey/guar consumed twice daily before meals high in carbohydrates could improve glycemic control in people who have trouble with blood sugar regulation. Five of the 24 participants experienced no decrease in their blood glucose peak, so there may be unknown individual differences that determine whether or not the whey/guar drink is an effective strategy for improving glycemic control. It’s possible that some of the participants had more serious pancreatic dysfunction, so whey wouldn’t be able to increase insulin secretion enough to make a significant impact.

The study did not assess whether the whey/guar drink would be effective at lowering blood glucose after a low carbohydrate, high protein meal. Substituting an egg for one piece of bread would reduce the carbohydrate content of the meal, while increasing protein content and keeping caloric value similar to the meal used in the study under review. It would be interesting to see how this meal affects blood glucose levels in the three-hour period after breakfast, with and without the preload whey/guar drink. If the whey/guar is not able to improve glycemic control beyond a macronutrient change, the whey/guar drink's usefulness may be restricted to those patients who are unable or unwilling to make dietary changes, or for the occasions when they eat higher carbohydrate meals. Further studies would need to determine whether the whey/guar drink would have an additive effect on glycemic control when the macronutrient composition was changed to higher protein and lower carbohydrate.

Long-term compliance with the whey/guar drink could be an issue. The intervention only lasted two days, and the authors did not report on the acceptability of the drink. Nor did they describe the taste, consistency, or other facets of the drink that might affect consumption habits. In addition, since diabetics on insulin were excluded from this study, no conclusions can be drawn as to how the whey/guar drink would affect this population.

Omniblend, an Australian manufacturer of food supplements, including protein powders, funded this study. None of the authors declared a conflict of interest.

Q. How would the whey/guar drink affect glycemic control if a higher protein or higher protein/lower carbohydrate meal was consumed?

It's unclear whether the whey/guar drink would have an additive glucose-lowering effect, or if changing the macronutrient composition would lower glucose with no additional effects from the whey/guar drink. Further studies would be needed to determine this.

The authors did not report on whether people taking metformin had any better or worse glycemic control than those not taking metformin. Because metformin's mechanism of action is to decrease the liver's glucose production, one would expect an additive effect on glycemic control since the whey/guar drink's mode of action is through delayed gastric emptying and increased insulin production.

A preload whey/guar drink before a high carbohydrate meal could be an effective strategy for improving glycemic control in older adults with diabetes or prediabetes that is diet- or metformin-controlled. Future studies are needed to determine subject compliance and effectiveness in lowering glycosylated hemoglobin in the long-term and whether or not the beneficial effect remains when a lower carbohydrate and higher protein meal is eaten instead.