Where do cravings come from? By Stephan Guyenet, PhD

Boy, do I love a fat slice of pizza or three. When that meaty, cheesy, tomatoey aroma hits my nostrils and I see that greasy cardboard box open and reveal those glistening triangular slices, I know I’m going to have a hard time controlling myself. Put me in front of an unlimited supply and I might just eat myself into a rather sorry state. At the same time, I know eating pizza isn’t healthy, and the stakes couldn’t be higher: This is exactly the type of food that ends up making us overweight, pushing us toward metabolic disease, sapping our vigor, and ultimately shortening our lives. So why do I do it? Where does the siren song of craving come from?

To understand where cravings come from, first we have to understand what they are, so I’ll start with a definition: A food craving is a state of heightened eating motivation that is directed at a specific food. It’s not the same as hunger, which is a nonspecific motivation for calorie-containing food in general. Craving and hunger are distinct motivations that emerge from different brain circuits in response to specific cues.

This brings us to our next key question: Where does motivation come from? This might sound like a metaphysical question, but in fact it is a concrete one that has already been largely answered by science. The human brain is hard-wired to be motivated by certain key goals that supported the survival and reproduction of our ancestors. These are things like sex, water, social support, physical comfort, and of course, food. Over the course of our lives, we learn how to accomplish these goals in ever-more effective ways, and one of the key mechanisms of that learning process is a powerful molecule called dopamine.

Here’s how it works. When one of your behaviors accomplishes a hard-wired goal, your brain releases dopamine in specific areas including the ventral striatum, and this causes you to become more likely to execute the same behaviors the next time you find yourself in the same situation.

The neurobiology of cravings 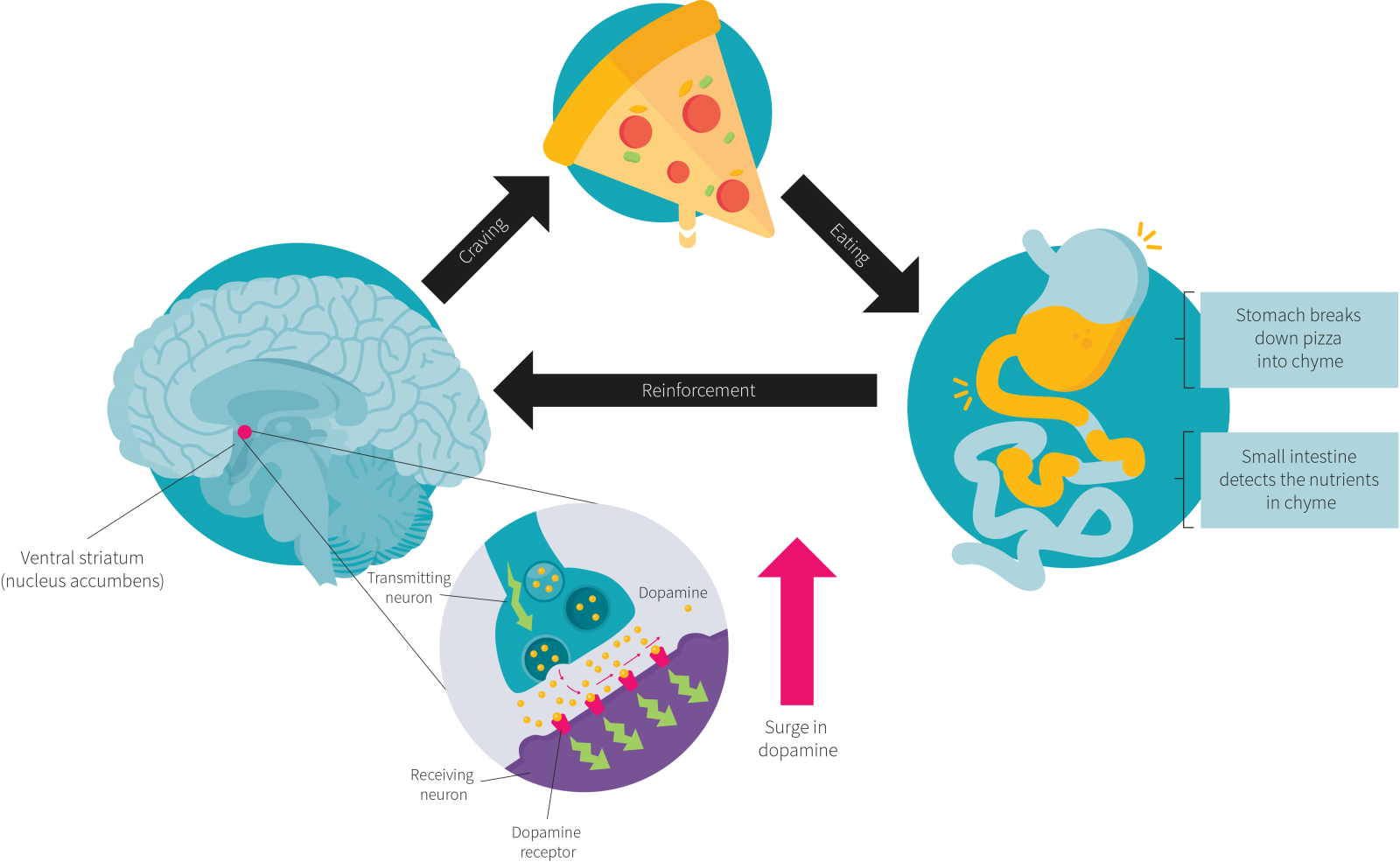 In technical terms, we say that your behavior has been reinforced. What you experience is that the sensory cues of the situation, such as its appearance, sounds, smells, tastes, and location, become motivational triggers that ignite your desire to repeat your previous behavior. The larger the surge of dopamine, the more motivated you will be the next time you encounter those cues. This is well illustrated by highly addictive drugs like crack cocaine and methamphetamine, which cause an immense release of dopamine that motivates drug-seeking behaviors so strongly that they can supersede constructive behaviors like eating, sleeping, holding a job, and maintaining personal relationships. Addiction, at its core, is a very strong craving.

How does this process work for food? At Brooklyn College, a researcher named Anthony Sclafani has been quietly chipping away at this question for the last thirty years, and along with other researchers in the field, he’s made considerable progress. In 1988, Sclafani showed for the first time that starch infused directly into the stomach of a rat can cause the rat to develop a preference for an odor that it detects simultaneously in its nose. In other words, if you give a rat cherry-flavored water while it gets an infusion of starch into its stomach, it learns to prefer cherry-flavored water over other flavors of water (recall that most “flavors” are actually odors). This suggested that starch in the stomach produced a reinforcement signal in the brain.

Further research showed that starch isn’t the only thing that reinforces behavior: Sugar, fat, and protein were also effective. Follow-up studies by Sclafani and others demonstrated that sensors in the mouth and small intestine detect the glucose, fructose, fatty acids, and amino acids in starch, sugar, fat, and protein and send a signal to the brain that releases dopamine. And the more concentrated the nutrients, the greater the surge in dopamine. Although we may like to believe that we have nothing in common with rats, research has shown that the same process happens to us.

What this tells us is that the brain isn’t simply wired to respond to food in general—it’s wired to be motivated by specific food properties, and the more concentrated they are, the higher the level of motivation. Presumably, these instinctive drives evolved to guide our distant ancestors to the foods that kept them alive and fertile in a challenging environment. This worked out well when calorie-dense foods were hard to come by and required considerable effort to obtain, but that’s not the world we live in today. In the modern world, we still carry the powerful instinctive drives of our distant ancestors, but the food properties they make us crave are far more abundant and easier to get than ever before in human history.

And that brings us back to pizza. I don’t remember the first time I ate pizza, but it must have been as a young child, and I have a pretty good idea of how it went. As the first slice traveled down my esophagus and into my stomach, then into my small intestine, sensors began reporting back to my brain, and here’s what they said: This food is an outstanding source of fat and carbohydrate, and a pretty good source of protein. Dopamine began to surge, and my brain made careful note of the meaty, cheesy, tomatoey aroma and flavor, the glistening, triangular appearance of the slices, and the greasy cardboard box. These associations strengthened over the course of my next few times eating it, until the smell or sight of pizza alone was enough to get my saliva flowing. And that’s how I react to this day.

This doesn’t explain idiosyncratic cravings such as when a pregnant woman wants a pickle with peanut butter on it and suddenly hates tomatoes—I’m not sure science will ever understand that. But it does explain the cravings for fattening, calorie-dense foods that are so common in our everyday lives and affect many of us in profoundly negative ways. These are foods like chips, fries, bacon, cookies, cake, ice cream, and chocolate, and the reason we crave them is that they deliver exactly what our brains are instinctively looking for: Concentrated starch, sugar, fat, salt, and protein.

Chocolate is the most frequently craved food among women, and it’s also a common craving for men. From the brain’s perspective, this isn’t hard to understand. Chocolate is not only a highly concentrated source of fat and sugar, but it has another trick up its sleeve that pushes its craveability into the stratosphere: A habit-forming drug called theobromine. Like its cousin caffeine, theobromine is a mild stimulant that acts on the same brain pathway as dopamine. This drug accentuates fat and sugar’s natural ability to spike dopamine signaling, which in many people results in powerful cravings, and in a few, addiction-like behavior.

Understanding cravings allows us to manage them more effectively. Since cravings are driven by food-related sensory cues such as the sight and smell of tempting foods, the most straightforward way to beat them is to avoid exposing yourself to those cues. If tempting, unhealthy foods aren’t available in your personal surroundings, not only will they be harder to eat, but you’ll be less likely to crave them. That’s why pizza rarely crosses my mind, despite the fact that I crave it when it’s around. I don’t put myself into situations that are likely to trigger the craving: I rarely order it; I rarely go to restaurants that serve it; and I rarely see TV ads that display images of it. Still, every now and then I indulge myself— consequences be damned. 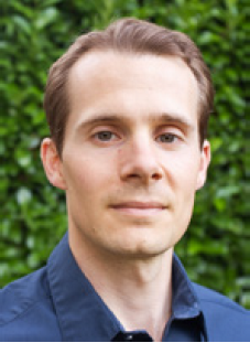 His peer-reviewed publications have been cited more than 1,500 times. He is an internationally recognized speaker on topics of eating behavior, obesity, and diet history, and the author of The Hungry Brain: Outsmarting the Instincts that Make Us Overeat. You can find more of his work at stephanguyenet.com.