The effects of full fasting vs. modified fasting on cognitive performance

How does modified fasting (around 500 kcal per day spread out over either two or three meals) compare to true fasting (0 kcal per day) with respect to blood glucose, hunger, food cravings, mental fatigue, and cognitive performance?

An increasingly popular method for weight loss is fasting.

Fasting can be implemented in many different ways. One example is alternate day fasting, which can improve chronic disease risk factors and cause weight loss[1]. Another example is the Buchinger method[2], characterized by medically supervised fasting that involves consuming a liquid diet and relaxing activities such as reading, music, viewing paintings, nature, humor, and meditation. A less esoteric type is intermittent fasting, with periods of fasting interspersed by periods of eating in the same day, which has also shown promise for the treatment of obesity[3]. The authors of this study used a similar method of intermittent fasting, which they called modified fasting. True fasting is another form of fasting, which includes a zero calorie diet on some days. True fasting was the focus of this study.

The trial was preregistered and used a randomized crossover design, which incorporated three different fasting conditions with outcomes tested over 7.5 hours. There was a seven-day washout period between conditions. There were 18 women 21–49 years old with a BMI of 25.8 and in good health who participated in the study.

The participants were randomized to start the trial in one of three groups: fasting, 2-meal, or 3-meal. The two non-fasting groups together were termed “modified-fasting groups” by the authors, so this review uses that terminology in the absence of internationally accepted terms for different types of fasting.

Once the participants were assigned their group, they were instructed to show up for a day of experimentation. All participants arrived in the morning of each phase in a fasted state, which was confirmed via a blood glucose reading of no more than 4.5 mmol/L (81 mg/dL). Then the experiment began, with the details depending on the condition.

The fasting group ate no food over the 7.5 hours. The two modified-fasting groups were given liquid meal replacements and snack bars. As shown in Figure 1, the 2-meal group consumed two liquid meal replacements (512 kcal total) with one meal eaten at 9:30 a.m. and the other at 11:30 a.m. The 3-meal group received one liquid meal replacement and two snack bars (522 kcal total) with the liquid meal consumed at 9:30 a.m. and the snack bars eaten at 12:30 p.m. and 3:30 p.m. All groups were also given three small baggies of celery, cucumber, and pepper totalling 100 kcal, and were allowed to consume these if they felt they needed to stave off hunger. They were also allowed to consume unlimited amounts of water, but no other beverages were permitted. 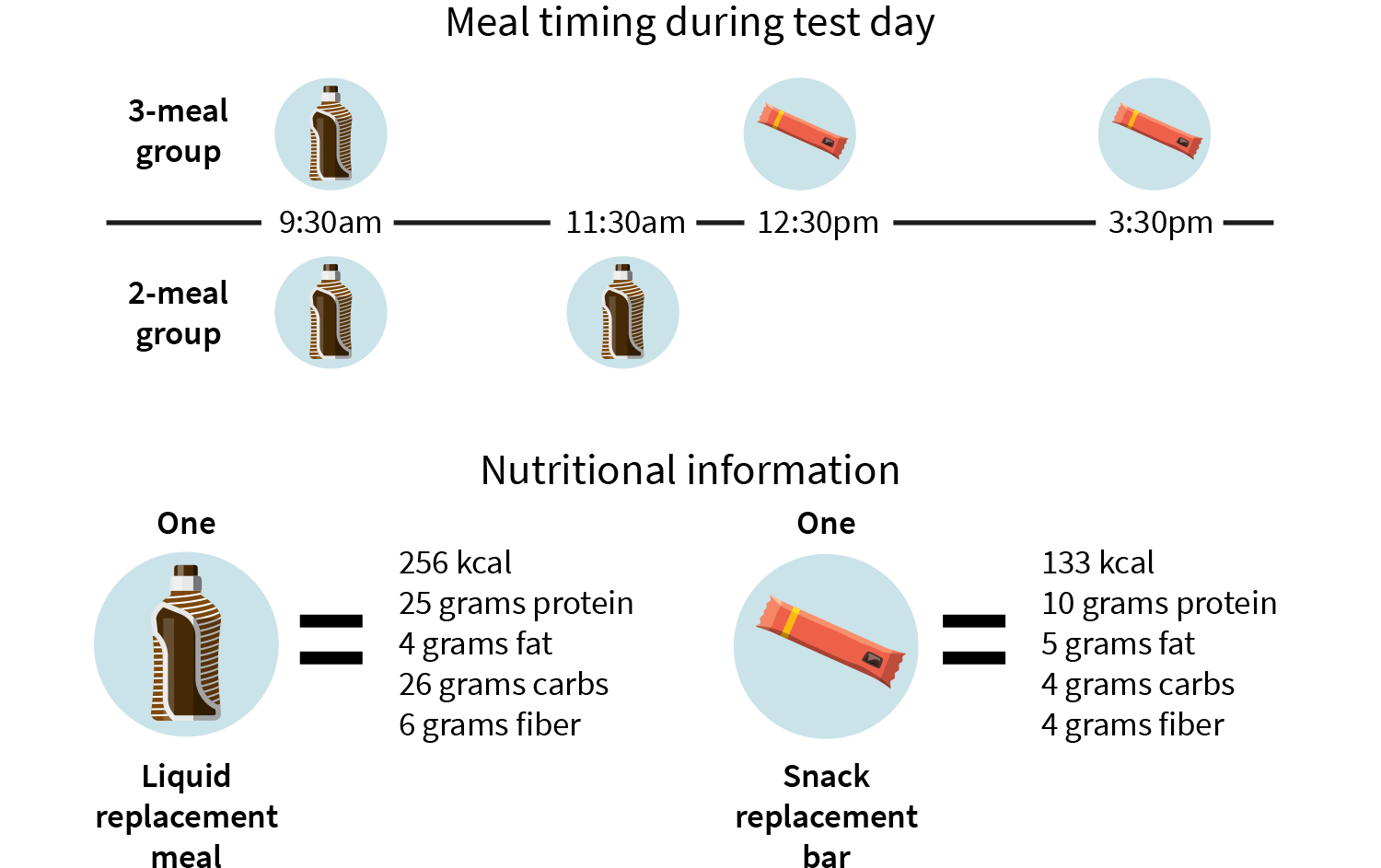 Once the first phase was over, there was a seven-day washout period before the participants returned to participate in a different dieting condition. This process continued until the participants completed all three phases.

Healthy middle-aged women were studied in a randomized cross-over design for 7.5 hours per day on three different days while they were following fasting or modified fasting diets. Measures of cognitive function, mental fatigue, blood glucose, satiety, and hunger were taken at multiple points between 8:30 a.m. and 4:00 p.m.

Cognitive performance did not significantly change over the course of the day as measured by the CSIRO Computerised Fatigue Battery in any of the groups. Some of the subtasks did show worse performance late in the day, but there was no difference between the groups. Overall, this data indicates cognitive performance was not strongly affected over 7.5 hours when using a fasting or modified fasting approach.

Hunger increased throughout the day for the fasting group, and was significantly higher compared to the 2-meal and 3-meal group at all timepoints except baseline. There were no differences in hunger between the 2-meal or 3-meal group, which is understandable since they consumed about the same amount of calories during the 7.5 hour experimental period.

There was a significant increase in sweet, salty, savory, and fatty cravings from 12:00 p.m. onward for all groups, with all types of cravings generally being higher in the fasting group compared to the two other groups. The frequency of questions asked about food over this short time might have affected these results.

The results, with more nitty-gritty details for mental fatigue, are summarized in Figure 2.

Figure 2: Results in a nutshell 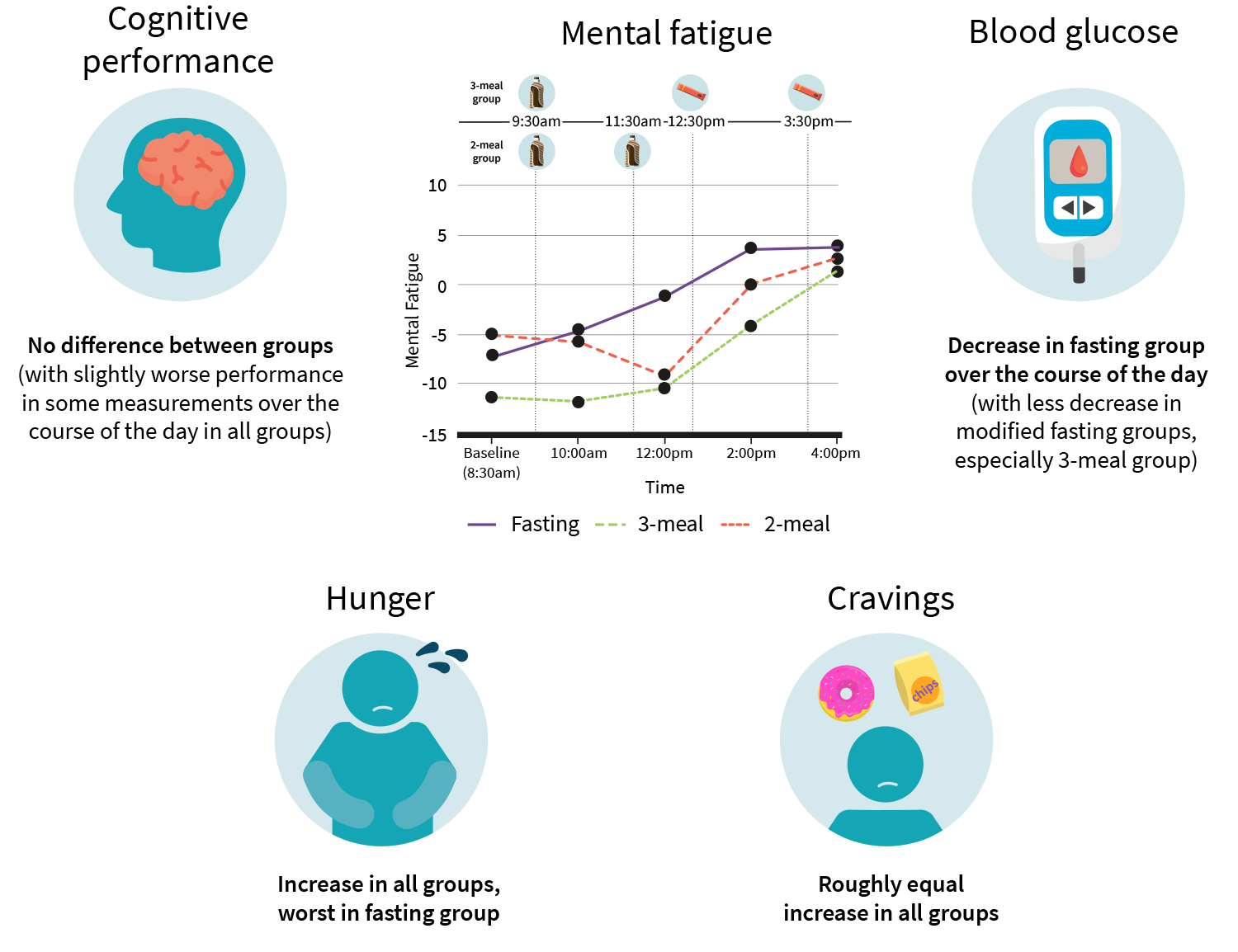 Cognitive performance was not affected over 7.5 hours during a fasting or modified fasting approach. There were significant decreases in blood glucose, fullness, and significant increases in fatigue and hunger for all forms of fasting. Mental fatigue was higher in the afternoon in the fasting group than the other groups.

There are several different types of fasting, with true fasting (0 kcal) being the most extreme version. This study found there was no difference in cognitive performance between true fasting and modified fasting. On the other hand, the subjective experience of modified fasting appears to be different for true fasting, which is due to an increase in hunger and food cravings. The participants in the fasting group also had more mental fatigue at some time points, and a general increase over time.

A meta-analysis of 10 studies[6] examining the cognitive impact of fasting on healthy individuals was completed in 2014. The authors found no major effects of fasting on cognition in healthy adults — not one cognitive function was consistently affected. The fasting period in these studies ranged from 5 to 24 hours. Another study[4] using two days of very low calorie diets (313 kcal) or true fasting (0 kcal) found that neither condition affected cognitive performance, activity, sleep, and mood of healthy young adults. This combination of data clearly supports the results of the study at hand, which found that fasting doesn’t decrease the ability to perform mentally in the short term.

The participants in this study were healthy, which is exemplified by their normal blood glucose levels[7] at the beginning of the study. In the fasting group, blood glucose declined over the course of the day. There is some debate about how low blood glucose can drop when fasting, with some data indicating fasting blood glucose levels off[8] at about 8 hours. There is also data indicating that cognitive performance declines when blood glucose falls less than 3.6 mmol/L[9]. This could be one of the reasons cognitive performance was maintained in this study because all groups stayed about 4.0 mmol/L during the experiment. The results of the current study are limited to the 7.5 hour time course the authors used. It could be that over consecutive days of fasting, cognitive performance and mental fatigue decreases. Research on longer periods of fasting indicates a positive shift in mood that coincides with the metabolic shift to ketone utilization[10] when fasting for 10 days.

A major limitation of the current study is the duration of the fast lasting only 7.5 hours. Practically, this is equivalent to skipping breakfast and lunch but eating dinner. This method could be relevant to time-restricted feeding, but not necessarily longer fasting periods, which is a common way of implementing fasting. However, the relevance to TRF is also limited because most people would do TRF every day with a smaller deficit, rather than only fasting once.

Another limitation is that the participants were offered a snack consisting of celery, peppers, and cucumbers. It’s unclear how many of the participants ate the snack because this wasn’t reported, but if they did, then this study may not represent true fasting. How much this deviation matters is debatable, but it’s something to keep in mind.

An additional limitation to consider is the large amount of variables the researchers measured without making adjustments for multiple comparisons and without naming a single, clear primary outcome. The combination of the small size of the study alongside the multiple measurements suggests that these results should be taken as preliminary.

Another limitation is that the study only included women. There is some evidence to suggest there are sex differences in neural activity related to hunger and satiety[11], which may translate into gender differences in cognitive performance or mental fatigue. So, extrapolating the current findings to men should be done with caution.

Finally, the current study used liquid meal replacements and snack bars, neither of which have a lot of food volume. This could influence cravings or satiety because fluid content can influence satiety and hunger[12] and the authors did not report the volume or amount of liquid in the meal replacements or the amount of water consumed throughout the day.

Both this study and other evidence suggests that fasting and modified fasting does not reduce cognitive performance in the short term, but true fasting alone may increase mental fatigue. Modified fasting also appears to help alleviate hunger pangs a bit more than full fasting, which could be explained by the more steady blood glucose levels in the modified fasting group. However, this study has several limitations that suggest these results should be taken as preliminary.

This study suggests that neither fasting nor modified fasting with low calories has an effect on cognitive performance throughout a standard workday. As could be expected, true fasting results in higher levels of hunger and more cravings alongside greater decreases in blood glucose levels. These results fall in line with previous research on the cognitive aspects of fasting, but may not reflect the long-term effects of fasting for more than 7.5 hours. However, given the limitations of this study, these findings should be viewed as preliminary.