Study under review: Nonpharmacologic Interventions for Reducing Blood Pressure in Adults With Prehypertension to Established Hypertension

Hypertension, a condition characterized by elevated blood pressure, is one of the largest modifiable risk factors for cardiovascular disease. Hypertension is prevalent in almost 30% of the entire U.S. population, with both men and women affected equally. Blood pressure management is one of the primary interventions used to reduce the risk of cardiovascular disease and stroke. While pharmacotherapy with antihypertensive drugs[1] is effective for managing blood pressure, other nondrug interventions such as diet, exercise, and stress management have also been shown to be effective.

Figure 1: Systolic pressure reduction in people with SBP of at least 150 mmHg (with 95% confidence intervals) 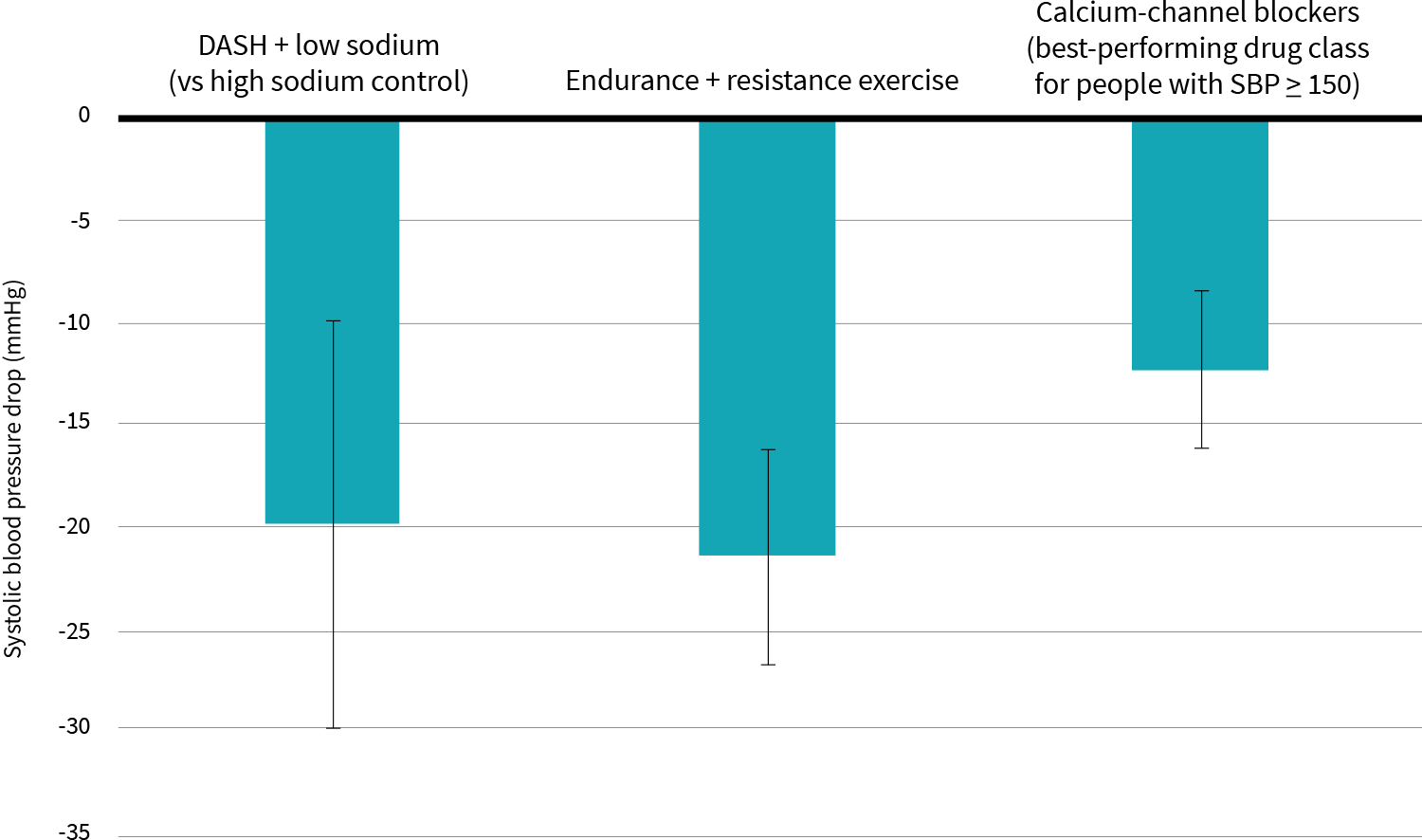 Hypertension affects up to 30% of the entire U.S. population and is one of the leading risks for cardiovascular disease. Reduced blood pressure can be achieved through antihypertensive drugs, or through various nondrug interventions, such as diet, exercise, and stress management. The present meta-analysis under review compared the effectiveness of various nondrug interventions on lowering blood pressure in people with primary hypertension and prehypertension.

The present study was a network meta-analysis of randomized controlled trials that were at least four weeks in duration and compared various nondrug interventions for lowering blood pressure in people with primary hypertension (hypertension without a known secondary cause) or prehypertension. Network meta-analyses allow researchers to indirectly compare interventions that were not directly compared in the underlying trials. The meta-analysis was reported according to PRISMA[6] guidelines but was not preregistered. 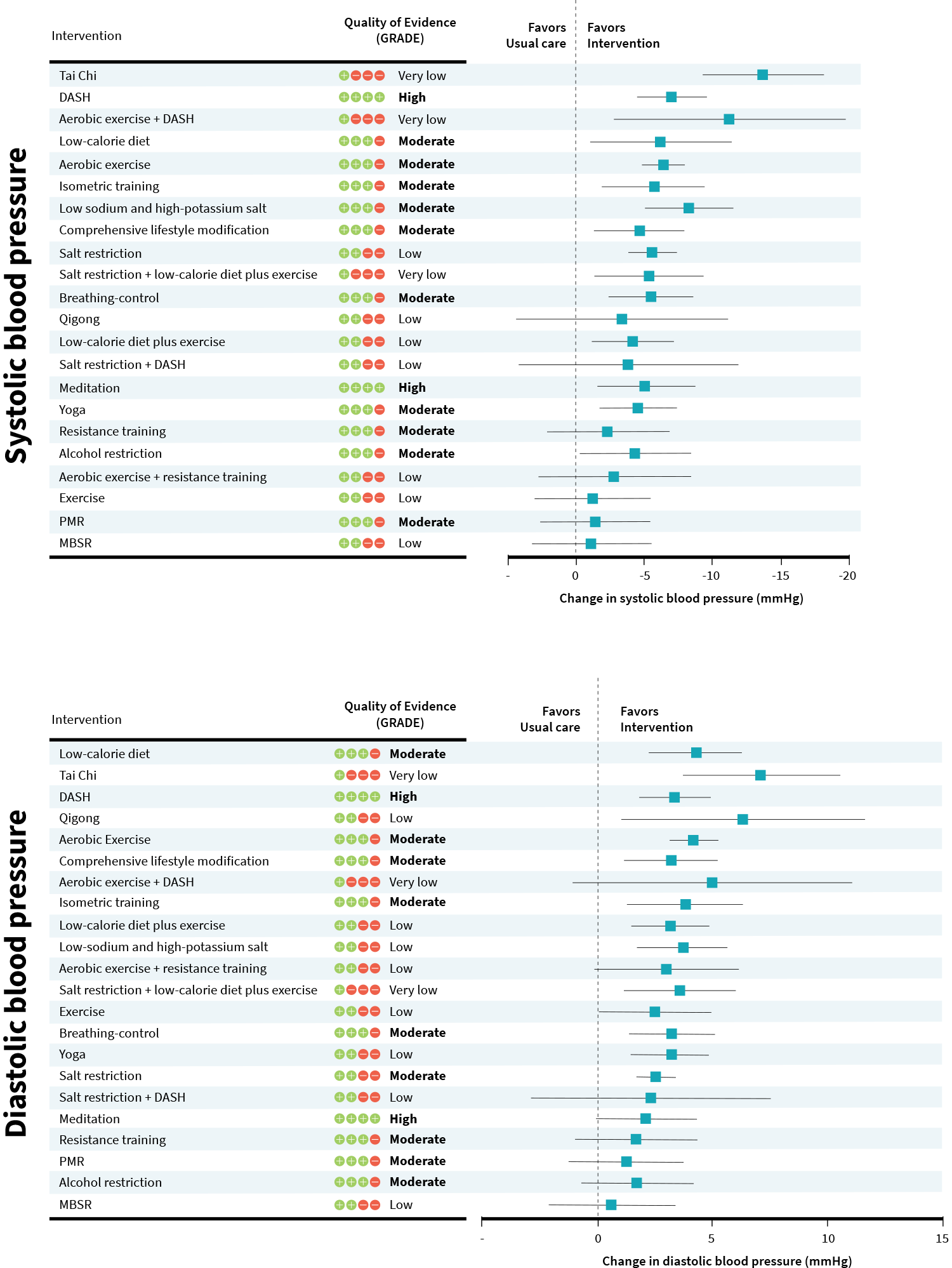 There was substantial heterogeneity (more than 70%) for both systolic and diastolic blood pressure in people with primary hypertension and in people with prehypertension. Sensitivity analysis did not change the rankings of the effects and the meta-regression found that the covariates of age, BMI, proportion of people using antihypertensive medications, and gender did not affect the results of this study.

The interventions ranged in both the magnitude of their effects as well as the strength of the evidence in support of them. For example, the present study found that the DASH diet, a diet covered previously in Study Deep Dives, characterized by increased fruit and vegetable intake and modest protein intake (15–20% of total calories), had the best evidence for reducing both systolic and diastolic blood pressure. The use of the DASH diet intervention was supported by high quality evidence, according to the GRADE criteria, and was shown to lower systolic and diastolic blood pressure by about 8 mmHg and about 4.5 mmHg, respectively. Other interventions, such as Tai Chi, showed a larger effect size (about 13 mmHg), but had a much lower quality of evidence. When both the magnitude of the effect and the strength of the evidence are taken into consideration, the DASH diet, low calorie diets, mediation, and salt restriction appeared to be the most effective forms of nondrug interventions for managing blood pressure. Several of the combination interventions (e.g. low calorie diet plus exercise) had lower levels of evidence and showed much less precise measures for their effects than singular interventions, possibly due to fewer and/or smaller trials.

It is important to keep in mind that these studies did not exclude people who were taking antihypertensive medication. Roughly a third of all participants were taking antihypertensive medication, and a meta-regression showed that the use of antihypertensives did not substantially change the results. As such, the present interventions can be used in conjunction with standard of care pharmacotherapy. In fact, combining pharmacotherapy with nondrug interventions may be more beneficial than either intervention by itself. For example, one study[11] found that a combination of a low-sodium diet with an angiotensin converting enzyme (ACE) inhibitor lowered blood pressure beyond the effects of just the ACE inhibitor, and that this combination was as effective as a combination of the ACE inhibitor and a thiazide diuretic. These results may not apply to all pharmacotherapies, as different drugs have different mechanisms of action and may not work synergistically with nondrug interventions.

There are several limitations of the present study that should be taken into consideration when interpreting the findings. First, not all of the interventions were compared to usual care. Second, there were no direct comparisons to pharmacotherapies in the input studies, which can make it difficult to understand the effects of these interventions under controlled conditions. Third, there was no analysis of different classes of antihypertensives in the subgroup analysis or meta-regression. Some antihypertensives may work on the same pathways to lower blood pressure as many nondrug interventions (e.g. salt restrictive diets and diuretics). Finally, a network meta-analysis does not provide the same level of evidence as directly comparing interventions in a randomized controlled trial because a network meta-analysis involves several assumptions.

The present study supports the use of a wide range of nondrug interventions for lowering blood pressure, with strong evidence for the DASH diet, lifestyle modification, meditation, and low calorie diets. These interventions may be used in combination with pharmacotherapies and can produce reductions in blood pressure that have been associated with significant reductions in cardiovascular disease risk.

Besides the restriction of sodium, there are some nutrients that may help lower blood pressure. For example, one meta-analysis[12] found that supplementation of potassium lowered blood pressure by about 4–5 mmHg. Beetroot juice[13] may also lower blood pressure, which may be partially driven by nitrate content[14], but also by mechanisms independent of nitrate. Garlic also probably lowers blood pressure in people with hypertension. The form doesn't seem to matter much for lowering systolic blood pressure, but garlic powder may outperform aged garlic extract when it comes to lowering diastolic pressure.[15]

Both aerobic and resistance[16] training have been shown to have some effect on blood pressure. However, it appears that aerobic training performed regularly is the most effective form of exercise for lowering blood pressure.

This systematic review and meta-analysis indicates that multiple nondrug interventions are effective for reducing blood pressure among people with primary hypertension and prehypertension. The effect of these interventions range from minor reductions (about 1 mmHg) to substantial reductions (about 10–15 mmHg), depending on the intervention. Dietary modifications, such as following a DASH diet, a sodium restricted diet, or a low calorie diet, followed by stress management through meditation or other practices, are likely to be the most beneficial. These interventions can be effective and important components of a holistic approach to reducing blood pressure, and can also complement conventional drug-therapy for hypertension.