Sugar Wars, Episode 6: The Return of the Fructose

Study under review: Effect of fructose instead of glucose or sucrose on cardiometabolic markers: a systematic review and meta-analysis of isoenergetic intervention trials

What is the effect of fructose consumption on markers of cardiometabolic disease, in comparison to glucose or sucrose?

It’s often been argued that fructose is the primary driver of all cardiometabolic disease, but the evidence for this hypothesis is mixed at best.

Cardiometabolic diseases are a group of related metabolic disorders, including non-alcoholic fatty liver disease (NAFLD), type 2 diabetes mellitus (T2DM), obesity, cardiovascular disease (CVD), and metabolic syndrome. Each of these is linked to excess calorie intake, but preclinical studies[1], observational studies[2], and some clinical trials[3] do suggest that fructose consumption might play a role in these conditions, even independently of calorie intake.

However, reviews looking at fructose in comparison to other common sugars like glucose, sucrose (a disaccharide of glucose and fructose, also called table sugar), and high fructose corn syrup (HFCS; a liquid sweetener typically containing 42–55% fructose) have provided mixed results. The main conclusions of these past studies are summarized in Figure 1. These previous meta-analyses do not converge on a clearly unified answer.

Dozens of studies and several meta-analyses have attempted to clarify the metabolic effects fructose might have relative to glucose. Although they are consistent with one another in some respects, areas of uncertainty remain.

The systematic review ultimately yielded 25 trials that looked at the effect of replacing fructose or HFCS with the same number of calories of sucrose or glucose over the course of one week or longer in humans and reported data for accompanying physiological effects. A total of 1,744 participants (47% female) ages 13–62 were included in the analysis. Eighteen studies compared fructose with glucose, 5 compared HFCS with glucose, 10 compared fructose with sucrose, and 5 compared HFCS with sucrose. The study duration ranged from 1–12 weeks (median of 3 weeks). The fructose dose ranged from 33–250 grams, representing 6–48% of the total daily calories provided by the diets. Nine of the 25 studies recruited participants with obesity or type 2 diabetes. Seven studies were classified as having low risk of bias, 6 as having high risk of bias, and 12 as having uncertain risk of bias.

The researchers estimated the percentage of the total variation due to heterogeneity, rather than to chance. Risk of publication bias and quality of evidence were also evaluated. Seven studies were supported exclusively by public institutions, while the others were entirely or partially supported by commercial funds. In fact, this meta-analysis was also supported by funds from a candy manufacturing and research organization in Italy.

This systematic review and meta-analysis pooled data from 25 controlled trials to determine the effects of fructose on fasting glucose, blood lipids, blood pressure and weight, compared to glucose.

Replacing HFCS with glucose did not change any cardiometabolic parameters in any meaningful way, nor did replacing fructose with sucrose.

Replacing HFCS with sucrose was not associated with a meaningful effect on total cholesterol, LDL-C, HDL-C, or TGs, but was associated with a significant decrease in apoB by a WMD of 11.29 mg/dL. For reference, physicians commonly recommend that ApoB should be lower than 130 mg/dL to prevent cardiovascular disease, and the participants from the sole study that reported on apoB changes had baseline levels of around 85–100 mg/dL. Little confidence can be placed on this latter result because it was based on a single study[11] and it contradicts the null effects seen when replacing pure fructose with sucrose.

As an aside, note that the numbers pulled from the above study that reported on apoB don’t agree with what the authors of the study under review reported in their meta-analysis. There are also some other discrepancies in their references.

Other than these findings, there were no other differences found. The only differences that were found are summarized in Figure 2.

Figure 2: The only significant differences found in this study 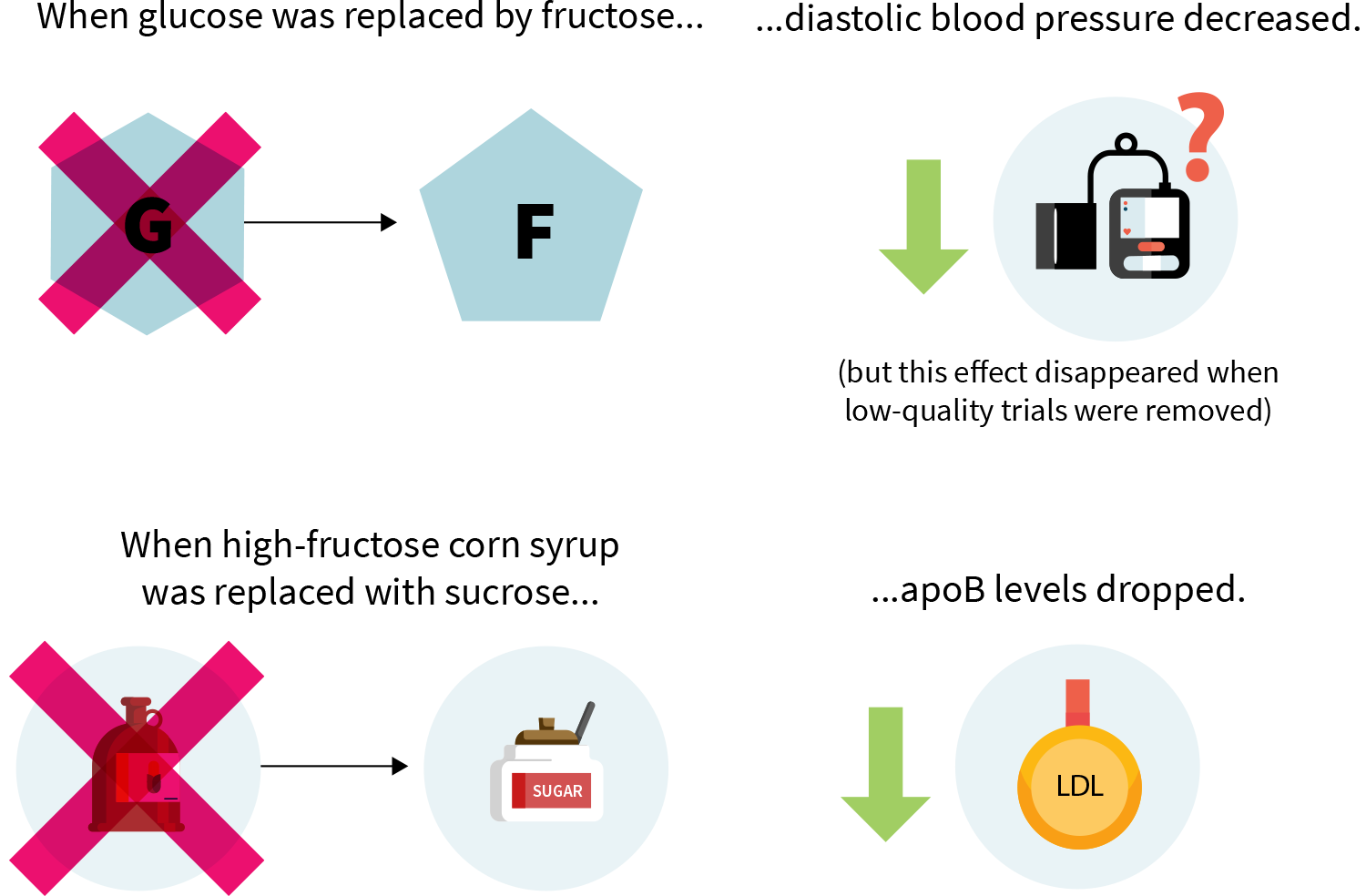 This systematic review and meta-analysis shows that, by and large, there does not appear to be much difference in the metabolic effect of fructose as compared to glucose. Replacing glucose with fructose might lower diastolic blood pressure by a small amount, and replacing high fructose corn syrup with sucrose might decrease apolipoprotein B, though confidence in these results is low.

Previous human research points to the lack of a consistent effect of fructose above and beyond that of other sugars when it comes to bodyweight and other cardiometabolic measures, but results from previous meta-analyses still differ. In this study, the authors add authority to their analysis by paying attention to details like excluding non-isocaloric comparisons in the first place, employing rigorous sensitivity and heterogeneity analyses, and adjusting for effect-modifiers. That said, it’s unclear why there are discrepancies between data reported in this meta-analysis and some of the data from the original studies. Overall, this meta-analysis appears to be one of the most thorough investigations on the subject, but review confidence is reduced because some inconsistencies in the findings for apoB and FBG cannot be reconciled.

Even if these results are mostly in-line with other research, they lie in contrast to the conclusions of some outspoken clinician-researchers, such as Dr. Robert Lustig’s “unifying hypothesis of metabolic syndrome[12],” which proposes that fructose may be uniquely metabolically damaging, particularly to the liver[13]. Though this meta-analysis does not specifically focus on the liver, it suggests that commonly-measured markers of cardiovascular and metabolic health respond similarly to fructose and glucose, challenging the importance of distinguishing between these two sugars[14].

Some look to fructose’s effect of elevating uric acid (not measured in this meta-analysis) as the primary driver of its adverse metabolic effects[15]. This theory may explain why fructose could indirectly lead to gout, as evidenced in[16] observational[17] studies[18], and hyperuricemia, as seen in clinical trials[19]. However, if fructose was the primary driver of NAFLD and other cardiometabolic diseases, then this would be indicated by increased markers of hepatic de novo lipogenesis, LDL-C, ApoB, and TGs, which are only inconsistently suggested by the evidence. To cast further doubt on this theory, one isotopic tracer label study showed that 29–54% of ingested fructose is converted to glucose[20] and 28% is converted to lactate, whereas less than 1% of dietary fructose is converted to plasma triglycerides.

The fact that so many previous meta-analyses have come up with slightly divergent results can be explained by a few factors. The first explanation is “statistical noise”—even if there’s no effect, results will be expected to come up with positive results on occasion (1 out of 20 times, assuming standard statistical analyses). Since different meta-analyses often include different sets of trials, the results that show up by chance can differ between studies.

Another explanation involves the possibility of substandard statistical analyses. The present meta-analysis looked at a number of sources of bias, including heterogeneity among studies, effect modification of certain variables, publication bias, and presence of individual studies that skew the agglomerated results. Once these were accounted for, all of the statistically significant results were washed out. Some of the other research studies found similarly bias-confounded[21] results[5], while others only found significant results when looking at studies in which calories were added on top of usual[6] intake[7]. These explanations also account for the reason why the same team’s previous meta-analysis[19] suggested a modest effect on FBG, which was not found in this analysis: having more data allowed them to attribute the effect to heterogeneity between studies.

Another key point is that many of these studies used very large fructose exposures. The fact that these excessive doses produced few, if any, significantly different results means that typical intakes are even less likely to produce differences over the time scales investigated. A median of 9% of an American’s calorie intake consists of fructose[22], equating to about 192 kilocalories or 48 grams of fructose per day. To put this into perspective, 29 of the 35 comparison arms used to determine the results of this meta-analysis included doses of fructose higher than the median intake, and 8 of the comparison arms were in excess of 99% of American adult’s fructose intakes. These supraphysiological doses are used often in preclinical animal studies[23], but they can’t provide a realistic effect of a more relevant dose of fructose.

Fructose and glucose are calorically the same, gram for gram. In terms of weight gain (positive energy balance) and weight loss (negative energy balance), there is no clear a priori reason to think that fructose would drive weight gain differently than other sugars. Even when it comes to fullness and hunger hormones, fructose appears to be at least as filling as glucose[24], if not more so 30 minutes after[25] ingestion[26].

Even if the observed differences between glucose and fructose metabolism in previous meta-analyses are real and not due to chance or confounding, you would have to consume an unusually large amount of sugar to feel those fructose-specific effects. By then, however, you would be consuming a damaging amount of highly refined carbohydrate anyway. For example, imagine drinking two different extra-large soft drinks, one sweetened with fructose and the other sweetened with the same amount of glucose. It will be drinking that much soda in the first place that causes a calorie surplus and harmful cardiometabolic effects, not a unique feature of the type of sugar being consumed. With many of the measured cardiometabolic markers being responsive to energy balance, and considering the mere fact that a molecule of fructose does not contribute any more to weight status than a molecule of glucose, it’s no surprise that the effect of fructose on cardiovascular and metabolic health parameters does not stand out from other refined carbohydrates.

This meta-analysis confirms what other high quality reviews have already suggested: the adverse metabolic effect of fructose is comparable to that of glucose.

This meta-analysis found that fructose consumption is no better or worse, cardiometabolically, than consuming glucose or other fructose-glucose combinations like sucrose and high fructose corn syrup. The metabolic effects seen in previous meta-analyses were not observed in this latest meta-analysis (e.g. increased TGs at high fructose doses[27], decreased SBP[19], increased[19] weight[8]) may have more to do with statistical noise or with other variables not fully accounted for.

The negative metabolic effects of excess fructose consumption are most likely tied to excess energy consumption and the relative absence of fiber, phytochemicals, and essential micronutrients in highly refined carbohydrates, rather than any unique effect of fructose itself.