Study under review: Low-fat diets and testosterone in men: Systematic review and meta-analysis of intervention studies

Does the amount of dietary fat, as opposed to carbohydrate, influence testosterone levels in men?

Adequate testosterone levels are important for overall health. Low levels in men have been associated with the signs and symptoms laid out in Figure 1, as well as a higher risk of developing some chronic diseases, like cardiovascular disease[1] and type 2 diabetes[2]. Similarly, some data[3] suggests higher all-cause mortality risk in men with lower testosterone levels, although there is high heterogeneity among studies and so this might represent reverse-causality.

Figure 1: Some signs and symptoms associated with testosterone deficiency in men 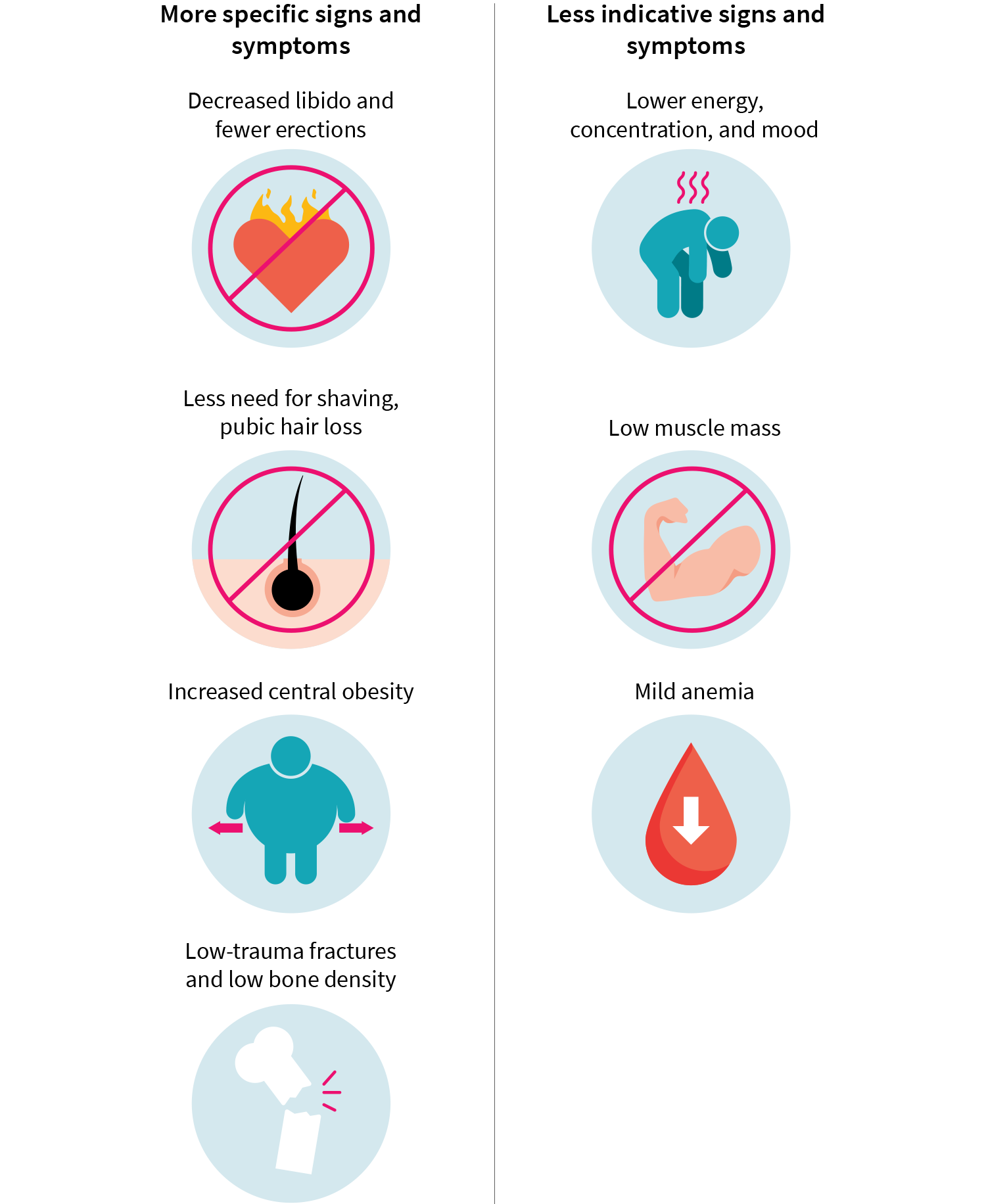 Several studies have[5] found[6] a progressive decline in testosterone levels over time. This age-independent decline has been observed[7] starting from the 1970s. It’s important to note that the change can’t be completely explained by traditional variables like obesity. It has been proposed that there has been a dietary shift[8] during which the consumption of ultra-processed foods and carbohydrates has increased, while the percent of energy consumed through fat has decreased, even though the grams of fat consumed has not. Nevertheless, there is some data suggesting a correlation between fat intake and testosterone levels, with low-fat diets being associated[9] with lower testosterone levels. However, a causal relationship remains to be established.

Adequate testosterone levels are important for overall health and reduction of risk of different chronic diseases in men. During the past 40 years, there has been a decline in testosterone levels in the general population that cannot be solely explained by traditional factors that are known to reduce testosterone, like obesity. Previous evidence suggests a relationship between dietary fat intake and testosterone levels, which might help partially explain this change.

This was a systematic review and meta-analysis of intervention studies that recruited healthy adult male participants and compared the effects of a low-fat (LF) versus a high-fat (HF) diet on total testosterone levels and related biomarkers. The review followed the PRISMA guidelines and The Cochrane Handbook for Systematic Reviews of Interventions. It was retrospectively registered.

In total, 6 trials including 206 participants in 7 samples (one study used 2) with a mean age of 46 years were included in the meta-analysis. All of the trials were crossover, but 5 of the 6 were not randomized. The duration of the studies ranged from 2 to 10 weeks, and the mean difference in fat intake between diet comparators was 20%, or 580 kcal. The researchers determined that 3 studies had low risk of bias and 3 had medium risk of bias. Post hoc subgroup analysis was only done for TT, as there was one study performed in non-Western participants and showed a qualitative interaction. Sensitivity analysis was also done only on TT, but no other subgroup or sensitivity analyses were performed due to the small sample size of studies available.

There was a small decrease in TT on LF versus HF diets (standardized mean difference, SMD: -0.38), with high heterogeneity between trials. Removal of the only non-Western sample[10] that included participants from South Africa led to an increase in the difference (-0.52; a medium-sized difference) and lower heterogeneity. 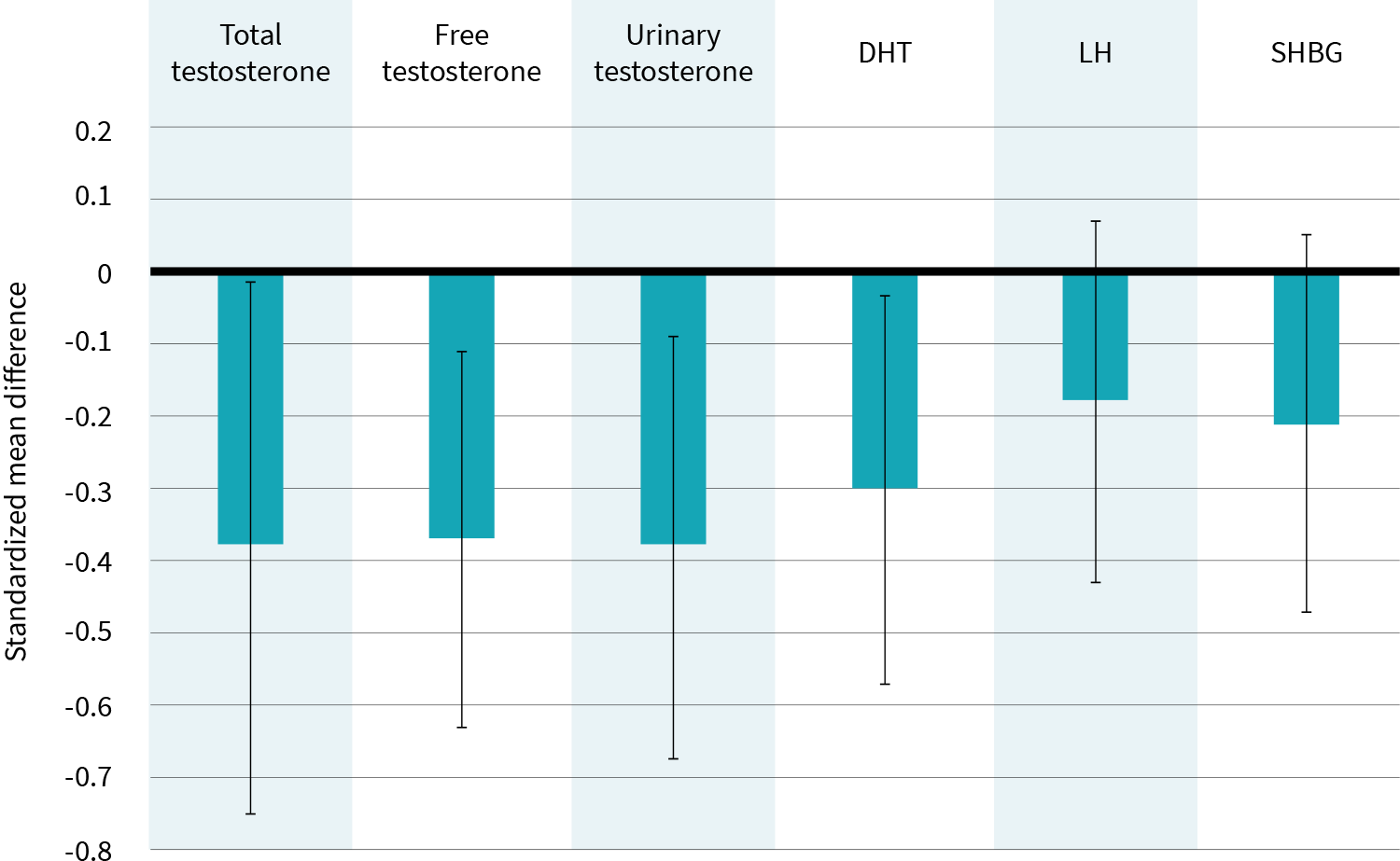 Sensitivity analyses for TT revealed consistent results, with the exception of the inclusion/exclusion of the data from the previously mentioned only study in non-Western participants.

A low-fat diet, compared to a diet higher in fat, reduced the levels of total, free, and urinary testosterone, as well as dihydrotestosterone.

Overall, this study suggests that swapping out fat for carbohydrates appears to reduce total and free testosterone levels. This reduction is likely due to a decrease in synthesis rather than to an increase in excretion because both LH, which stimulates testosterone synthesis, and DHT, a metabolite from testosterone, as well as UT (reflecting excretion) were decreased by a LF diet.

Although the overall data is consistent in directionality, the outlier[10] sample from South Africa suggests that ethnicity and genetics might make a difference in the relationship between diet and testosterone metabolism. This study involving participants from South Africa recruited North American men and women and rural South African men, and switched their diets: North Americans were put on a vegan diet, while South African men, who consumed a diet close to vegan, were switched to a Western diet. Despite being similar in design to other trials (the higher fat diet used as a comparison to a low-fat diet is typically the normal, Western diet), there was a drop in testosterone with the higher fat diet. This strongly suggests that the baseline diet and genetic background are important considerations for these types of studies.

The meta-analysis also seems to support another potential diet-testosterone interaction: a link between the type of dietary fat and testosterone. There is some evidence[11] that suggests that not only the amount, but also the type of dietary fat, might influence testosterone levels, with a higher polyunsaturated to saturated fat ratio being associated[12] with lower testosterone levels, and saturated, as well as monounsaturated fat, being associated with higher levels. However, a higher carbohydrate diet, compared to a higher protein (under the same fat intake) diet, also appears to result in higher testosterone[13] levels, albeit alongside a parallel increase in SHBG, which binds testosterone and reduces the levels of free/bioavailable testosterone. Overall, there seems to be an interaction between diet and testosterone and related biomarker levels, but much more data is needed to confirm these findings and to better understand the relationship between different macronutrients and energy on testosterone metabolism. Unfortunately, the small number of participants and studies included in the meta-analysis doesn’t allow for a more detailed parsing of the data.

A strength of this study is that the researchers controlled for potential confounders in the inclusion criteria. However, the main limitation of the current study is the low number of participants and studies, particularly considering that the approach used to perform the meta-analysis can cause problems[14] when the sample size is small. It is therefore necessary to have more interventional data with less methodological heterogeneity to properly delineate the responses to different amounts and types of dietary fat and testosterone levels in men while considering baseline variables.

While Western participants consistently experienced a reduction in testosterone levels after consuming a low-fat diet, the only data from non-Western participants showed an opposite response, suggesting that genetics and background ethnicity might modulate the effects of diet on testosterone metabolism. However, given the small sample size, a more detailed analysis of the data is not possible. Future studies are needed to properly understand the relationship between diet and testosterone.

Compared to a high-fat diet, a low-fat diet reduces testosterone and related metabolites in men, suggesting a decrease in testosterone synthesis. However, the fact that there was an opposite response in the only trial that recruited non-Western participants suggests that there might be genetic and ethnic differences that affect the relationship between diet and testosterone. In addition, the type of dietary fat, in addition to the amount, may be an important variable. Nevertheless, higher quality interventional data is needed to further shed light on this topic, as there are only a few relevant studies that could be included in this meta-analysis.