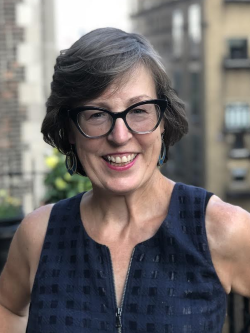 Suzanne Robotti leads both MedShadow Foundation as founder and president and DES Action USA as executive director. MedShadow Foundation is an independent, nonprofit health journalism site focused on the side effects of medicines. The vision is that every person understand the benefits, risks and alternatives to taking medicine to manage health care. In 2017, Suzanne was named to the FDA Drug Safety and Risk Management Advisory Committee as the Consumer Representative on the Drug Safety and Risk Management Committee.

In addition, Robotti serves as a Trustee of Springfield College; as co-chair of the Transportation Committee of NYC Community Board 7 Manhattan; on the Advisory Board of Pace University Masters in Publishing program.

Thanks for agreeing to the interview! You’re the founder of the nonprofit organization MedShadow.

Q. Would you mind telling us about why you chose to found MedShadow and how you went about it?

I’ve had two health experiences that alerted me to the risks of drug side effects. The first happened before I was born, the second more than 45 years later.

When my mother was pregnant with me her doctor prescribed a drug called diethylstilbestrol, or DES. This was in the late 1950s. DES was the first synthetic estrogen and was supposed to help avoid a miscarriage. But DES was based on bad science. The medicine was useless for miscarriages and, worse, the adverse effects of being exposed to DES in utero didn’t become apparent until several decades later - so doctors kept giving pregnant women the drug for at least three decades.

Between 5 and 10 million pregnant women were prescribed DES from the 1940s until the early 1970s. DES acted as an endocrine disruptor — the very first endocrine disruptor — and it interfered with the development of reproductive organs in children exposed to DES in utero, caused a rare vaginal cancer in some young girls, and increased the risk of breast cancer when the daughters became adults (for more see www.DESAction.org). In my case, my prenatal exposure to DES left me infertile. I found out when I was 14 that I would never be able to bear children.

Many years later my nephew came to live with my husband and me when he was 12 years old. The local school declared that he had ADHD and we had to put him on Ritalin. I took him to a specialist who quickly wrote the prescription.

“Don’t worry,” I remember him saying, “if this doesn’t work we’ll double the dose. If that doesn’t work we’ll try Adderall and Wellbutrin. We’ll get him on track.” I hesitantly asked about the side effects. “All temporary,” he waved them off. And the long-term effects? “There are no long term effects.”

I grew annoyed at his confidence, at the cursory medical exam before prescribing and his minimizing of my concerns. I pushed more, asking, do you have any studies? How do you know there are no long term side effects? “There aren’t any studies,” he acknowledged, “But I would know if there were any side effects. I’ve been giving these drugs to kids for twenty years.”

I called my internist, I called my friend the pharmacist, I called upon Dr. Google and none of us could find a study on Ritalin that lasted more than 315 days. This drug takes the same neural pathways as cocaine. It’s a stimulant. It suppresses appetite and growth.

We live in New York City, the general consensus is that most kids are given Ritalin - some for ADHD but many as a study aid. I wondered if parents understood that no one knows the long-term effects, and if they came to realize that, would it change their decision to use Ritalin (or Adderall or Wellbutrin).

Because of my DES exposure, I wasn’t going to take a risk with our nephew. I wasn’t truly convinced he even had ADHD! We worked with a therapist applying cognitive behavioral therapy and we had to convince the school that this was a better route for our nephew. It took longer, but in the long run our nephew learned a lot about himself, his strengths and managing his weaknesses.

All medicines have risk. People have the right to know the risks and sometimes that information is hard to find. That’s why I decided seven years ago to found MedShadow as a health news site focusing on drug side effects and what alternatives you can consider that can minimize or even eliminate a health problem without using drugs.

MedShadow’s mission is to protect your life and the quality of your and your family’s life.

Q. Just like Examine.com, MedShadow prides itself on being an independent source for information; you don’t accept funding from pharmaceutical companies and medical device manufacturers. Can you describe how you get revenue while remaining independent?

MedShadow began as a passion project for my husband and me. We have been the primary funders for the past six years. At this point, we are actively exploring the best route to revenue for MedShadow while remaining true to our mission of health news without pharma influence.

Q. Do you see specific gaps in the healthcare system as it’s now implemented that led to the need to found MedShadow? If you could wave a magic wand to help fill some of those gaps, which are the most important gaps you’d want filled?

That’s a big question. A friend of mine who is active in patient advocacy, noted in a recent article for MedShadow that when she was trained to design aerospace products they were required to have at most 3.4 defects per one million occurrences. If we had that requirement for medicines, would any be approved? But what is the value of a human life? Drugs are approved by the FDA on data paid for and submitted by the sponsoring pharma company. How many times have drugs been pulled off the market because they were ineffective and/or harmful? Our standards for safety and efficacy are too low.

Here are some ways I see to improve: Increase the hurdle on safety and efficacy. Most drugs have only been tested on fewer than 1,000 people and go on to be used by millions. Medicines must be tested on more people before approval. Post-marketing testing is often required and seldom completed. Pharmaceutical companies must be responsible not only for getting drugs approved and selling those drugs but also for continuously testing even well established drugs.
Drugs must be compared to each other and to alternative healing methods. Opiods for back pain and ACL/meniscus knee damage? Recent research has shown that opioids are ineffective for the pain and that surgery is no better than physical therapy six months later. If companies want to make money on a drug, they have to continuously prove it is reasonably safe and more effective than less risky and/or less invasive alternatives.

Q. Part of MedShadow’s vision is to help everyone have the information they need to weigh the risks and benefits of health care options. Once someone is informed, how should they go about thinking and using the information to decide what to do? Any tips for how to think more clearly about health care decisions?

Many times you have the luxury of doing your research and then making a decision. If your doctor suggests a pill for high blood pressure, you have time to search for information you trust, get a second opinion from a different doctor and find out what lifestyle changes you can make that might lower your blood pressure without medicine.

There are other times where decisions have to be made more quickly. Still you can prepare for expected challenges. Parents should become familiar with common meds while their children are healthy. When your child is sobbing from the pain of an ear infection, you want to know before then that antibiotics are seldom effective with ear infections (only one in 20 children will get relief from antibiotics for ears but every child will have his or her biome damaged and many will have diarrhea and a rash). Instead, 90% of children given either acetaminophen or ibuprofen have pain relief by the next day.

Then there are the chronic illnesses that need ongoing attention - such as asthma. You’ll constantly be looking for new ways to lower the amount of asthma triggers, you’ll want to know the best ways to minimize steroid use because of the strain on the kidneys and what new drugs might be coming to market that could help or not be worth the risk.

Remember that your doctor is your consultant, not your boss. You have hired him or her for the best advice and interpretation of tests. You have to live with the decisions made in that office, not the doctor.

When it comes to wellness we tend to focus more on lifestyle and nutrition than supplements. In most of our articles, not just the “Wellness” ones, we try to offer non-drug alternatives and diet and exercise are nearly always part of the recommendation. We’ve also covered nondrug practices like acupuncture, hypnosis, or animal therapy which can be very effective with so much less risk. We have an article coming out about the cleansing power of potted plants in a home. I was so convinced I went out and bought a plant!

Q. More generally, what role do you see for non-medical interventions like diet, exercise, massage in healthcare?

It’s much easier to stay healthy than to get healthy. For example, stress is much better managed by exercise, massage, cognitive behavioural therapy, eating whole foods, acupuncture, getting a new job, getting a new dog and so forth. Dealing with stress by taking anti-anxiety drugs can cause insomnia, headaches, sexual dysfunction, weight gain and nausea. Why not take a long walk with a dog instead?

When you have health, safeguard it and use your health (Walk! Cook your own food! Have fun with your partner! Take a yoga class!) to create more health.

Q. Anything else you’d like our readers to know?

Be wary of new drugs. When a drug is approved by the FDA it’s only been tested on a thousand or so people (in most cases). Don’t take a drug that’s new to the market if you can avoid it. Sometimes a drug is unique, or you’ve not been able to use older, better known drugs and in a life and death case of course you’re willing to take on more risk.

However, with new drugs the side effects and adverse event profile are not known and won’t be until a million or more people take it. Among 222 novel therapeutics (new drugs) approved by the FDA from 2001 through 2010, 71 {32.0%} were affected by a postmarket safety event — which means the FDA issued a Black Box Warning (the most severe warning) or other significant warning.