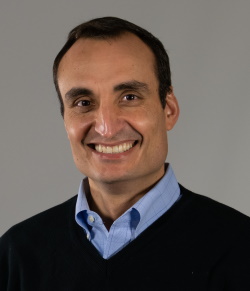 Dr. Ray Dorsey is the David M. Levy Professor of Neurology and Director of the Center for Health + Technology at the University of Rochester. The Center seeks to provide care and research opportunities to anyone anywhere. Ray and his colleagues have written Ending Parkinson’s Disease, a book that provides a prescription for ending this debilitating condition.

Ray previously directed the movement disorders division and neurology telemedicine at Johns Hopkins and worked as a consultant for McKinsey & Company. His research has been published in leading medical, neurology, and economic journals and has been featured on National Public Radio, in The New York Times, and in The Wall Street Journal. In 2015, the White House recognized him as a “Champion for Change” for Parkinson’s disease.

Thanks for agreeing to the interview! Can you tell us a little bit about yourself, your professional background, and your work?

I am a neurologist at the University of Rochester Medical Center, where I care for individuals with Parkinson’s disease primarily via telemedicine. We also operate a center that conducts clinical trials that have led to four FDA-approved treatments for the condition. The vision for our Center for Health + Technology is to enable anyone anywhere to receive care or to participate in research.

Given the COVID-19 situation, people are all-too-familiar with the term “pandemic” right now. In your book Ending Parkinson’s Disease, you suggest that Parkinson’s disease fits many of the criteria of a pandemic. This sounds a bit strange on its face since we usually think of pandemics involving bacteria or viruses. Why do you think Parkinson's disease resembles a pandemic?

Parkinson’s disease is the world’s fastest-growing brain disorder, even faster than Alzheimer’s. It is increasing in almost every part of the world. No one (to our knowledge) is immune to it. And some of its likely causes, such as certain pesticides (paraquat) and industrial chemicals (trichloroethylene) are spreading throughout the world. So while not infectious, it shares all the other characteristics of a pandemic.

Parkinson’s disease is classically characterized by a rest tremor (usually in the hands), stiffness, slowness, and difficulties with walking and balance. As we describe in the book, the condition is much more than that and actually likely begins outside the brain for many. The disease gets worse over time, and people live with it for 15-20 years, on average. We need to act to prevent this debilitating condition.

In the book, we outline the steps individuals and society (e.g., ban paraquat and trichloroethylene) can take to prevent Parkinson’s. Forty million Americans get their water from private wells. Many are in rural areas and contaminated by pesticides or other chemicals. They should test their wells. Many live near Superfund or other contaminated industrial sites (I discovered one 15 minutes from my home). If they live near one contaminated with trichloroethylene (half are), they should test their indoor air. Vigorous exercise, modest amounts of caffeine, protecting our head, and eating organic may all decrease an individual’s risk of developing Parkinson’s disease.

As a follow-up, certain countries have banned paraquat, while others like the United States, South Africa, and Japan still use it. What can concerned citizens do to encourage their governments to reduce or eliminate the use of pesticides and pollutants that increase the risk of developing Parkinson’s disease?

Over a million Americans have Parkinson’s disease. If they all write to the EPA Administrator asking for paraquat to be banned, it will be banned. His phone number is 202.564.4700. I just called his office myself. His email is wheeler.andrew@epa.gov.

In your book, you cover evidence that all sorts of exercise can be useful for people with Parkinson’s, especially “forced exercise” that pushes them past the intensity they normally achieve on their own. However, the evidence for exercise’s ability to prevent Parkinson’s disease is less clear, while still promising. Based on the current evidence, what types and intensities of exercise do you think would have the best chance of reducing the risk of Parkinson’s disease?

Studies suggest that vigorous exercise (the equivalent of swimming 3.5–4 hours per week) can reduce one’s risk of developing Parkinson’s disease by 20%. The type of exercise is likely less important than the amount. Do something you enjoy and sweat a bit.

Two other lifestyle factors you mention that can help reduce the risk of developing Parkinson’s disease are eating a Mediterranean-style diet and to take in moderate amounts of caffeine. How strong do you think the evidence is for these recommendations, and are there any other major lifestyle factors that increase the risk of developing Parkinson’s disease that people should know about?

Research also suggests that a Mediterranean diet and moderate amounts of caffeine (the equivalent of 1–4 cups of coffee a day) can reduce the risk of Parkinson’s. The evidence is less robust than it is for exercise but is still worth considering. Caffeine can cause anxiety and headaches, which should also be considered.

Do you have any final thoughts you’d like to let our readers know about?

In the 1980s, HIV activists adopted the motto of “Silence=Death”. For Parkinson’s disease, silence=suffering, needless suffering. If we rise up and make our voices heard, we can be the generation to end this debilitating disease. But we must act. Readers can purchase the book on Amazon and learn more at www.endingPD.org or by emailing us at info@endingPD.org. All of the authors are devoting their proceeds to efforts to end Parkinson’s.